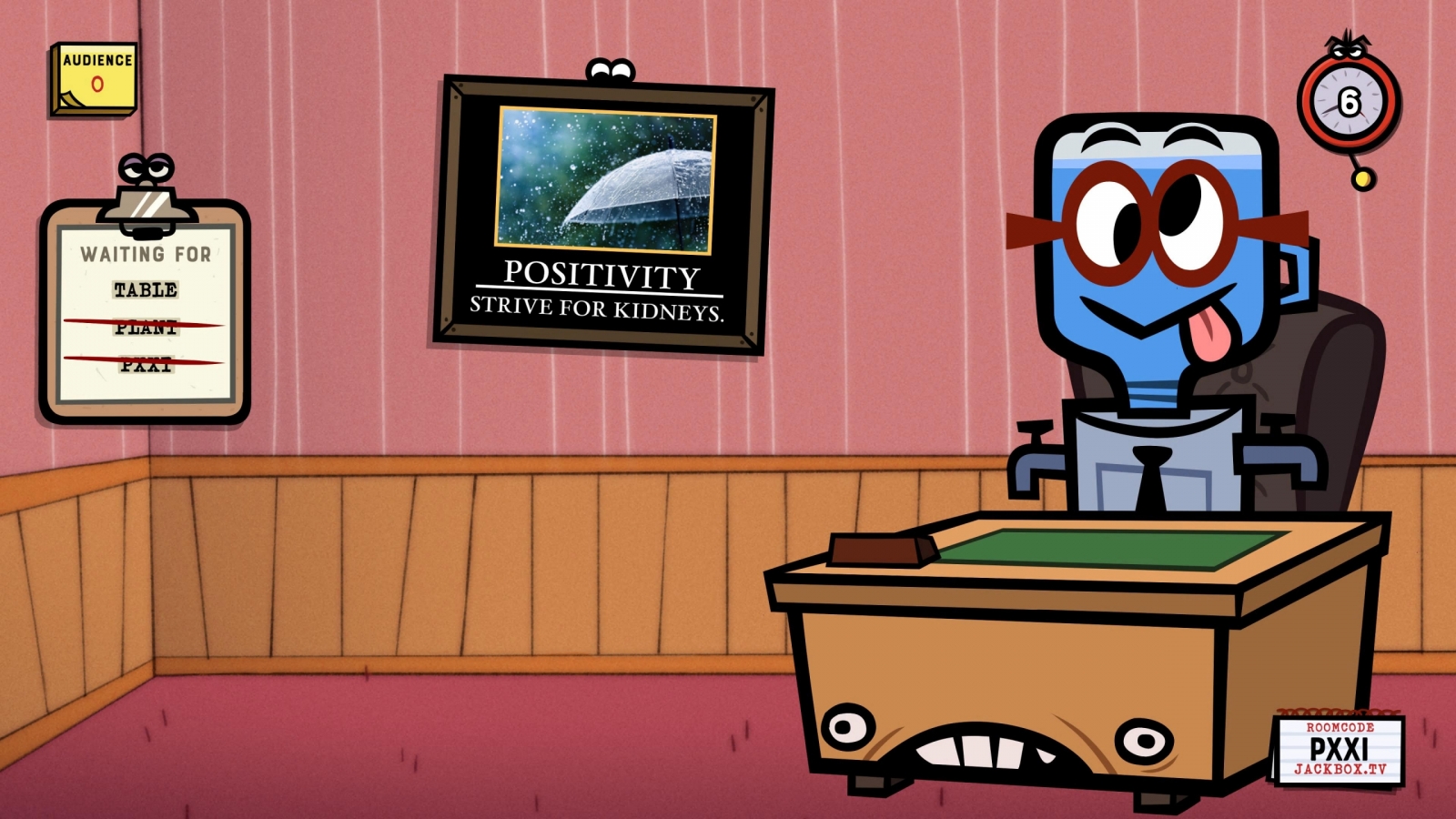 It’s that time of year again, a new Jackbox Party Pack comes to digital storefronts for some party time fun. The developers have kept this train rolling like clockwork since 2014 and, to be completely honest, it’s starting to run out of steam. The 8th Party Pack has some interesting games, but after the newness wears off I don’t see myself turning to this pack again for friendly gatherings.

Starting off the pack is yet another Drawful, but with a twist! This is Drawful Animate, where players make two frame animations to convey a prompt. The other players then, much like Fibbage, type in fake titles to fool their opponents while trying to guess the correct prompt. It can make for some hilarious moments, if you’re bad enough at drawing, but the actual guessing part can be hit or miss. For example, it’s very easy to recognize what was written by your friends in the room and what was written by the Jackbox team, so the actual guessing part can be a little too easy. They attempt to mimic how players may type in answers, but the prompts end up being so out there that they stand out from the rest. However, this is one of the better games in the pack and can make for a good time if you’re not really worried about competition.

Next up is The Wheel of Enormous Proportions. This game is similar to You Don’t Know Jack but with more reliance on luck. In the first phase, players answer trivia questions and, depending on how many answers they got correct in each question, receive slices. After three rounds of questions, players proceed to the wheel where they place their slices and spin to allocate points. This phase has some strategy to it in where and how you place all your slices, you can stack them together and some parts of the wheel give more points, but it all comes down to luck when you’re actually spinning. You go back and forth between these two phases until a player reaches 20,000 points, they then spin the winning wheel to see if they win the game immediately or have to continue playing. Whoever wins has their question, entered at the start of the game, answered by the wheel. Of course it’s meant to be a joke, since the game can only really tell what type of question you asked (who, what, when, why, etc.), but it can be a decently funny way of ending the game.

I didn’t really enjoy this one, the trivia portion was OK but my problem with it is that only the top scoring answerer will receive slices. Most questions have multiple answers, so whoever gets the most correct gets the slice. Sometimes they even get two slices or the person who comes in second gets one, but this leaves things with overall few slices going around. Any not filled slices turn into normal score spaces, which give the spinner points then switch over to power spaces to give whoever answered the final question points. In most rounds, the wheel isn’t anywhere close to being filled so it makes the question phase feel like it matters much less. Even if you get a ton of slices, you can still end up losing through bad luck. The Wheel of Enormous Proportion ends up feeling like the Mario Party of trivia games: sure skill can help, but you’re mostly relying on luck to win. 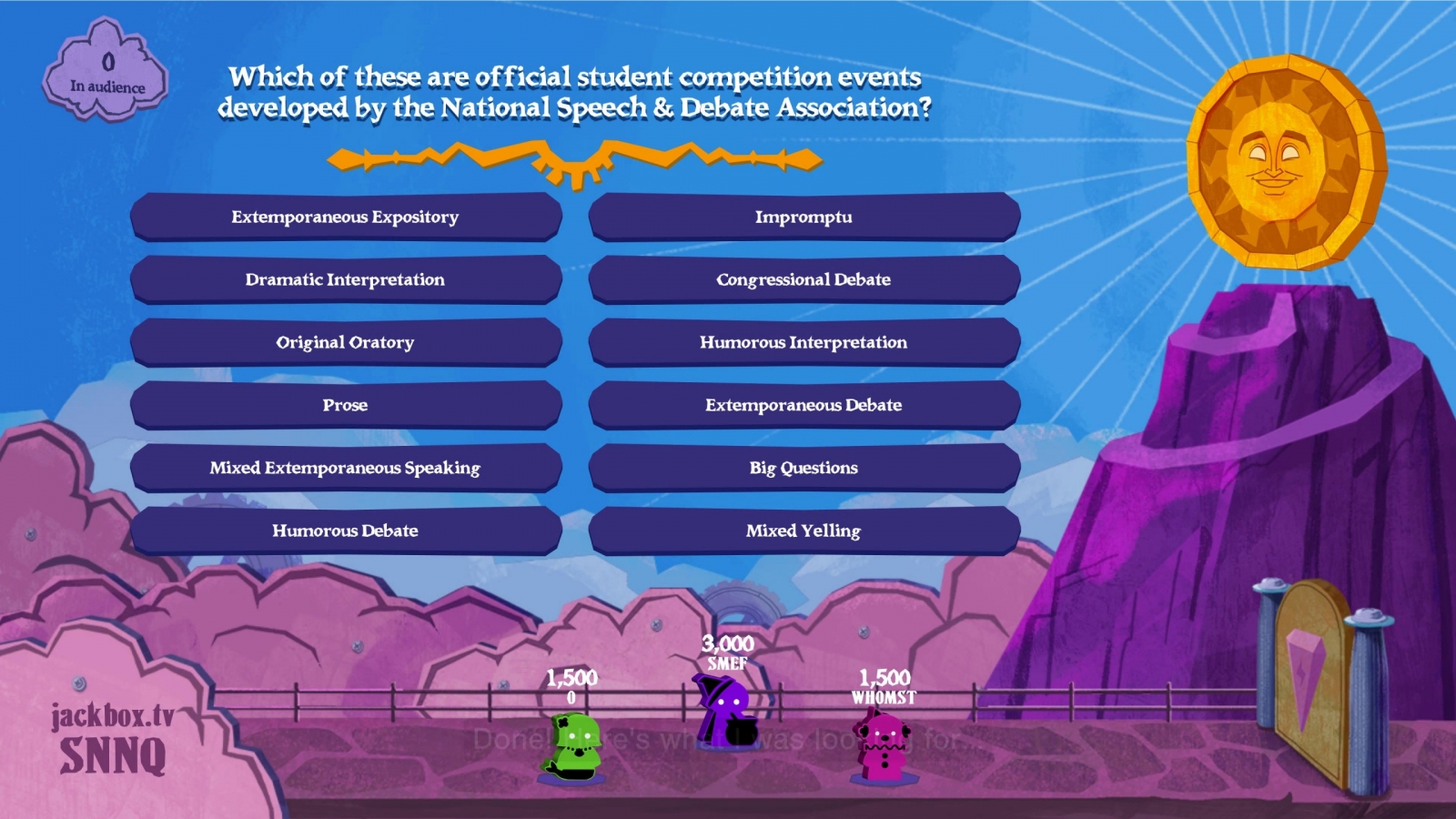 Job Job puts a comedic spin on a process I’m far too familiar with: job applications. As is typical, the hiring manager doesn’t want to go through all those applications, but instead of funneling them through a computer they make you do it instead! Players answer IceBreaker questions, then use the words from those answers to answer more traditional job interview questions. Players then vote for the funniest of two answers and whoever receives the most votes gets the points. In addition, players whose words you used receive some points and you can get more by working in words from the question itself. This continues for several rounds, with more mechanics added, and whoever has the most points by the end of the game gets the job.

This is one of the pack’s highlights, although it is reliant on everyone being in tune with each other’s senses of humor. It’s a lot of fun to work out absurd but still relevant answers with a jumble of completely unrelated words, but doesn’t quite reach the hilarity of other, similar games from previous packs. 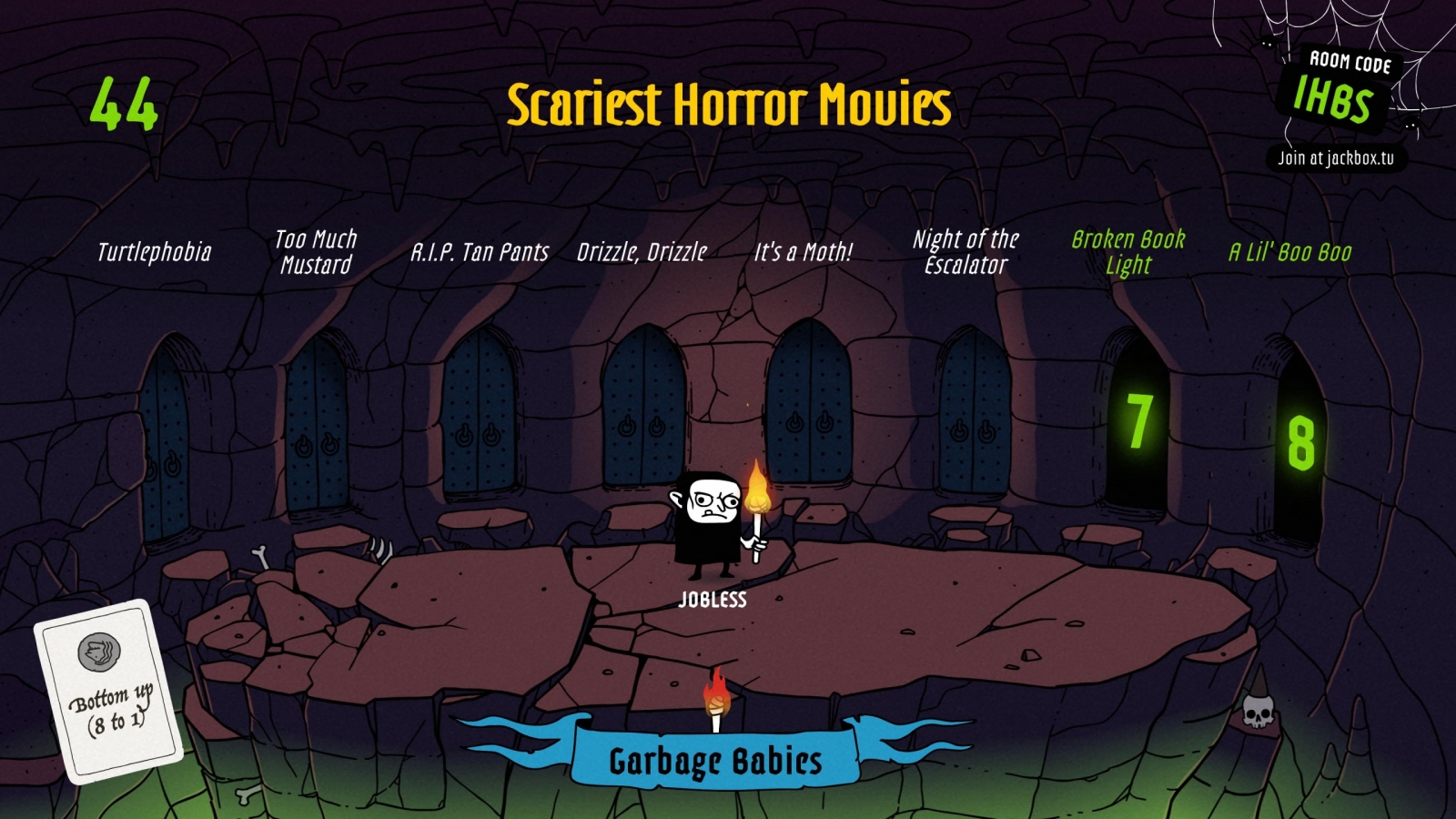 Pole Mine is a bit of a weird one, and took me a few rounds to understand. Players are divided into two teams and then rank things in a category just like a top 10 list. Each round, the teams need to correctly guess the total rankings of the things from the entire group. The first round sees you finding the top three, the second finding 2 through 4, and the final round going from lowest to highest. Each correct answer will give your team one torch (except in the final round), while an incorrect answer will lose you a torch. If your team runs out of torches in the final round and the opposing team answers correctly, the opposite team wins. Only one person on each team can guess on their turn, so you need to work things out with your team before you answer.

You can play Pole Mine with as few as two players, but I wouldn’t recommend this because it removes the fun of arguing with your team while the clock ticks down and working in the other team’s discussion which may have revealed some of their opinions. It can be pretty fun, most likely with even more people, but it can be a bit too complicated for its own good. 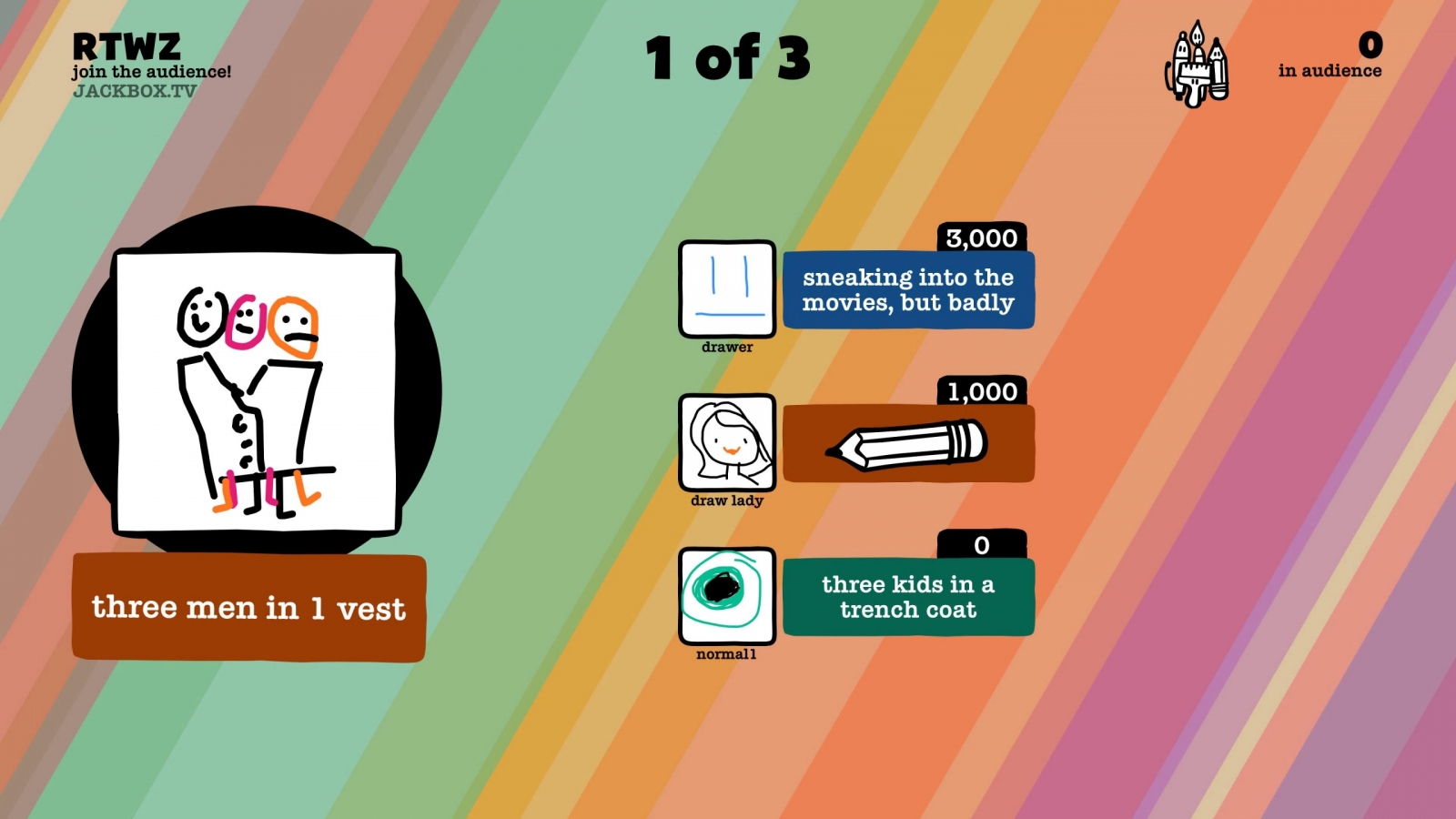 Finally we reach what’s by far the best game in the pack: Weapons Drawn. This is a murder mystery game where everyone did it and players try to discover who committed the other murders while hiding their own. Of course, you can’t kill without a weapon, so you need to draw some based on prompts. However, given your characters’ hubris, everyone has to hide a calling card in the form of a letter from your name within the weapon. After choosing your weapons, you name an accomplice who then serves as the victims. Once the lights go out, everyone attempts to murder and guess who the the accomplice served. After enough people are dead, players then investigate a random selection of the cases trying to figure out who done it by examaning the murder weapon then voting on the culprit. After a few rounds of this, any cases that didn’t get investigated initially become part of the lightning round in which everyone votes quickly and there’s no need to reach a consensus. For every murder you commit and culprit you correctly guess, you get a point, whoever has the most points by the end wins.

The theming is what makes Weapons Drawn so fun – everyone loves a murder mystery party! The game itself is no slouch either, trying to hide your letter is fun in and of itself, but using it to try and trick other players into pinning the murder on someone else gives you some mind games to play. Both phases are a great time, and the only flaw I could spot was if your name is too different from the other players it might be easier to spot your weapon. Still, this is the most enjoyable game in the pack and I hope variations of it return in future games.

Sadly The Jackbox Party Pack 8 has more duds than hits this time around. Job Job and Weapons Drawn can be a lot of fun, while Pole Mine, The Wheel of Enormous Proportions, and Drawful Animate range from bad to decent.

David is the kind of person to wear his heart on his sleeve. He can find positives in anything, like this is a person who loved Star Fox Zero to death. You’ll see him playing all kinds of games: AAAs, Indies, game jam games, games of all genres, and writing about them! Here. On this website. When not writing or playing games, you can find David making music, games, or enjoying a good book. David’s favorite games include NieR: Automata, Mother 3, and Gravity Rush.
Related Articles: Indies, The Jackbox Party Pack 8
Share
Tweet
Share
Submit