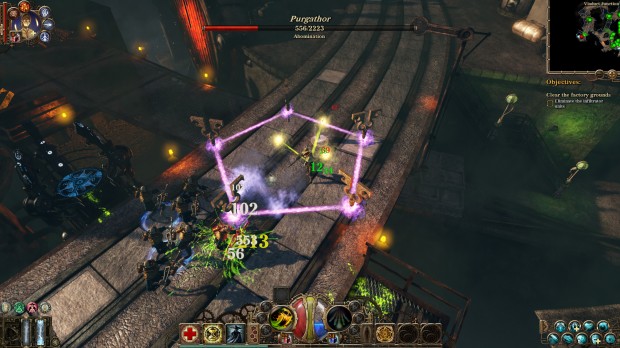 A little over a month ago you might have checked out our hands-on preview of The Incredible Adventures of Van Helsing II and wondered how the final product panned out. Now a few days past release, we get a chance to dive back into the world of Abraham Van Helsing and his adventures in old-world Borgovia.

The middle-child of a planned trilogy, Van Helsing II picks up somewhat directly after the first title. The neo-gothic adventure title isn’t just a retread of its predecessor – it spells an ambitious step forward for NeocoreGames, giving would-be-hunters vastly more content, more than five times the skills, multiple character classes, and far more. Could The Incredible Adventures of Van Helsing II live up to the very high bar already set just one year ago?

After either importing your existing character, or starting a new one at level 30 to continue your adventure, Van Helsing II opens with the titular character having just defeated Fulmigati and his mechanized Doomsday Automaton. Heading back to the city of Borgovia, he finds it under siege. After a crushing defeat, Van Helsing is forced to retreat to a secret underground lair. Surrounded by his allies and generals, he’ll mount an assault on a new threat with the help of a mysterious newcomer known only as Prisoner Seven. Is he an ally or foe, and what are his true intentions? As Abraham and his ever-present spirit companion Katarina join up with the resistance to try to retake the city of Borgovia, our adventure truly begins.

The first thing you’ll notice is the wealth of new skills. Just a cursory glance at the tree gives a window to the vast array of potential character builds. The previous title offered the Hunter class with the main product, giving players The Arcane Mechanic, and the Thaumaturge through DLC. Van Helsing II offers up these classes for the price of admission, but these archetypes are just dipping your toes in the water. There are now over 200 active skills (up from 40) including all of the modifiers that you can attach to the main powers – not unlike a certain demonic-named title released recently. These can create classes that I doubt even NeocoreGames tested, changing the game every time you play it. You’ll need those powers, too, as there are far more powerful foes to face this time around.

In terms of combat, if you’ve played an action RPG in recent memory you have some idea of what you are getting here. Van Helsing II expands on the standard formula by giving the player a wealth of skills that they can mix and match in any way they see fit. Click-and-slay combat works pretty well, though you’ll likely find that sticking with just a few skills nets you better survivability than random low level powers. The five pre-built veteran characters are already pretty well balanced against the threat ahead, so new players may wish to start there until they understand the expanded depth of the new skills matrix.

If there is one thing that you can say unequivocally about Van Helsing II it’s this; it has more. More monsters, more character archetypes, more humor, more weapons, more skills, more story – just MORE. Even features that were present for the first game got a fresh coat of paint. Tower defense was expanded greatly, though it remains an entirely optional portion of the game. Katarina got an upgrade, giving players greater freedom to control her behavior and a better approach to equipment comparisons. The addition of a secret lair, runecrafting, and easter eggs everywhere shows just how much the developer wanted to pack into this sequel. The most amazing part is that they have decided to keep the same price as the previous title – just $15. Cheaper than most sale prices on Steam, Van Helsing II delivers incredible value for such a small price of admission.

The Incredible Van Helsing was already pretty to look at, but NeocoreGames went back into the engine to add a few features they’d left on the drawing board for the sequel. The most noticeable change has to be the addition of dynamic weather, but a quick comparison of the forest areas in both games shows just how much additional detail they have put into the environments. The blend of science and technology along side a dash of the potential of Nikola Tesla himself gives the developer a lot of room to stretch their legs visually, and they took every advantage. There is a verticality to the levels, especially the first one, that lets us experience Borgovia in new ways. Even when you find yourself revisiting areas from the first game, they are changed by the the war, giving them a fresh feel.

While the sheer amount and depth of content is a sight to behold, there is one unfortunate tradeoff this time around: bugs. I’ve had to restart my characters three times due to issues with the final retail game client. I’ve found myself in update loops in Steam (each being a little over 4GB of downloading before they fail) trying three times to update before deleting my game entirely and suffering another 8GB full client download. It’s also not uncommon to find dozens of items and tooltips with names like battle.gui.ResistanceWindow.skill_learn and VH2.item.whatever.something. Given that I’m partially deaf, I use subtitles, so it was frustrating to see those cut off during cutscenes or watching them overlap. Similarly, the multiplayer client has stability issues, preventing players from taking advantage of the new cooperative or PvP play modes. On both my MSI GT70 and on my Dell 24” monitor I also spotted occasional screen tearing during more explosive scenes. The framerate was rock solid, but there are a few minor hiccups in the engine, clearly.

Through the most recent patches we are seeing a great deal of rebalancing. My Adeptus was able to obliterate foes with his Swirling Void power, but my Hunter faced repeated thrashings throughout the game as he never felt like he hit hard enough. Some fights were incredibly difficult, and other boss battles were a walk in the park. It’ll be interesting as things are ironed out to see how the whole thing plays out, but currently it does feel a bit uneven.

One thing that is not uneven in Van Helsing II is the voice work. The voice actor and actress that bring Van Helsing and Katarina to life have returned for the sequel. Powered by even sharper, wittier dialogue, the game delivers most of the background and story via Van Helsing’s voiceovers. Throughout the adventure he’ll also banter back and forth with Katarina. Sometimes it’s regarding whether or not they can trust this mysterious new ally, Prisoner Seven, and other times it’s just pure tongue-in-cheek pop culture fun. Hearing Van Helsing say “Those are truly some angry birds” and having Katarina reply with “Don’t be such a pig – they were probably just protecting their eggs” delivers a chuckle. Hearing her break the narrative fourth wall and complain about being sent back to town to sell your junk just puts it over the top. Courtesy of NeocoreGames Narrative Designer Viktor Juhász’ writing the game delivers witty one-liners, and just like any good comedian’s performance, most of it lands but a few lines fall flat. In the end you still laughed, and that’s what counts – well done.

At the end of another dozen or so hours of play (two or three hours longer if you dig into the plethora of side distractions) I found myself enjoying Van Helsing II quite a bit more than I expected. The technical issues were a nuisance, but the well-crafted writing and voice work kept pulling me back in. I wish the multiplayer had more stability so I could have enjoyed it with friends, but it is very clear that NeocoreGames has a lot more they want to show us. Their ambition did outstrip their time table a bit, but there is far more than $15 worth of entertainment here. When you switch up your character type and play it again you’ll find things you missed, and trying another character class will likely deliver a completely different combat experience altogether.

As a general rule - when your game’s release date is just a year after the first, but you’ve more than doubled the amount of content, you might want to rethink that timeframe. The team has been hard at work on these issues, and there have been frequent updates since release, each nailing down small portions of bugs and balance issues, but it’s hard to make a second first impression. Despite the technical issues, NeocoreGames ultimately delivers more of what we fell in love with in the first Van Helsing title. Hopefully they take a little more time to iron things out to conclude this very compelling trilogy.