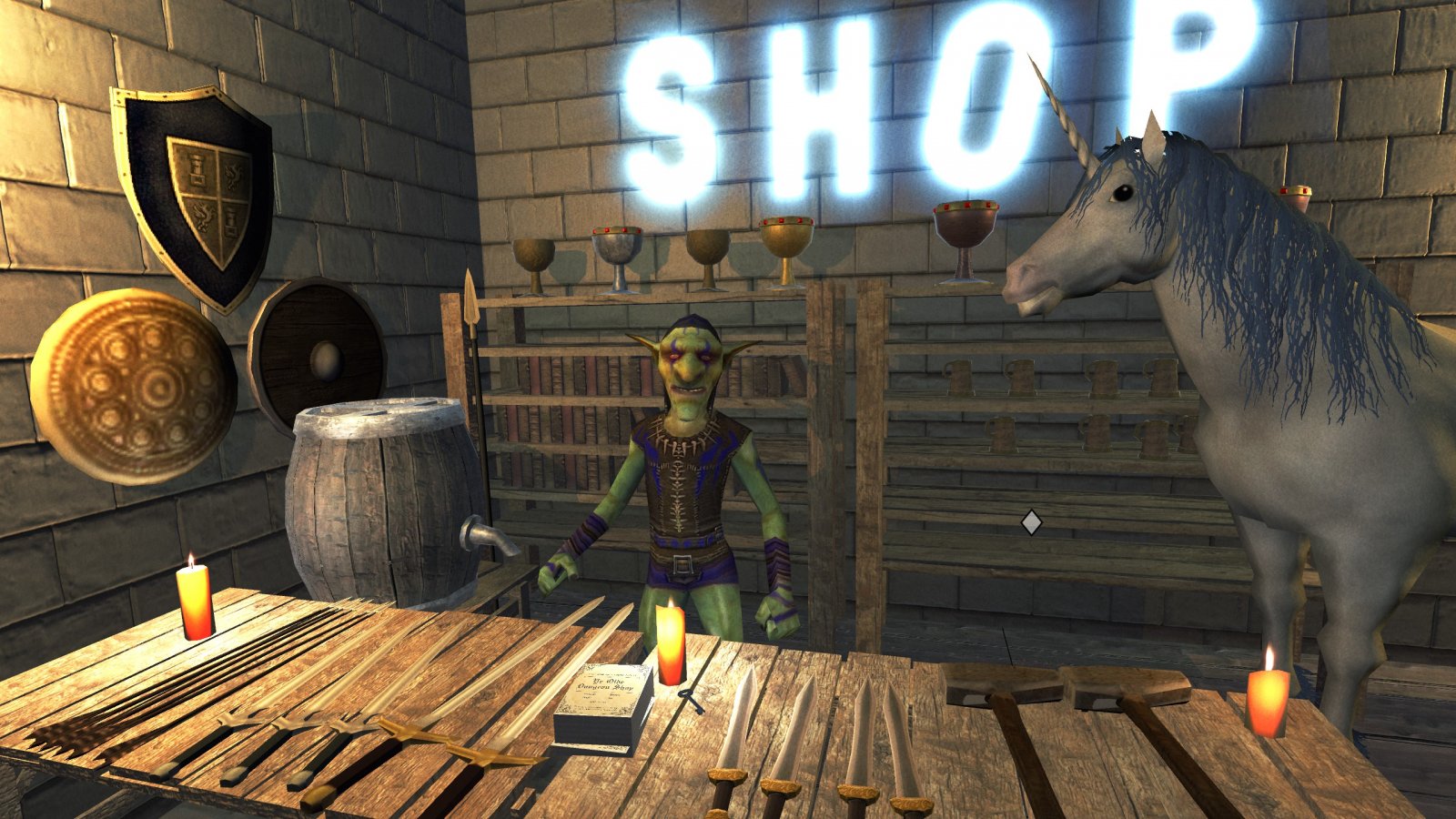 First, there were a few things I enjoyed about the game. Unicorn Dungeon features an 8-Bit dungeon section, which I will get more into later, that has some good music for whatever reason. I also laughed at maybe one joke. I guess that counts as a positive? The game wanted to be funny, but it was pure cringe.

This is how my nightmare began.

The game follows Sir Typhil of Loserville as he goes to find a unicorn so he can become king. Don’t question it. His quest takes him to a dungeon where he decides, “Sure, why not, let’s go check it out.” One of the first things you do in the game is walk down a stupidly long hallway. That’s it. Nothing happens in this hallway. No jokes, no crazy encounters, no world building, just nothing. It went on looping for so long I was close to restarting the game. That entire segment is some of the worst game design I have seen in my life. The opening of a game should be exciting as it tries to grip the player and keep them for the long haul. Not a boring stretch of nothing that made me wonder if the game was somehow broken.

Unicorn Dungeon tries to be funny. It fails, however, to realize that random does not equal funny. The unicorn needs a rutabaga to follow Sir Typhil of Boringsville out of the dungeon. That’s random, not funny. A goblin with a shop that has a huge neon shop sign isn’t funny, it’s random. Jokes require wit and timing; not just random things thrown in front of the player’s face. This isn’t helped by the fact that all the characters are stupid and unlikeable. Sir Typhill of Stupidsville’s distinctive quality is that he is a knight. There is also a Princess whose personality is that she is a Princess, but probably not. The characters could all be replaced halfway through and I would have never noticed. I understand what Unicorn Dungeon was aiming for: taking fantasy tropes and turning them on their head could make for a funny and enjoyable experience, but the creators of Unicorn Dungeon don’t seem to grasp the intricacies of these tropes to turn them on their head. This leads to everything being a random mess.

This 8-Bit dungeon was spawned straight from hell.

None of this is made any better from just how terrible the game looks. Everything looks as if it is made of clay and the character animation is slow and awkward, even with something as simple as walking. The best-looking part of the game is the 8-Bit dungeon, and that is only because I don’t have to look at how ugly everything else. The dungeon itself is boring and has a complete lack of creativity visually. I could live with that. I could go through a generic dungeon and be on my merry way. What I can’t forgive, however, is the absolute joke of a combat system that takes us back about 30 years.

The combat system found in the dungeon made me want to cut off my hands just so I’d have an excuse not to play this game anymore. See, you engage in combat by walking into enemies and hoping you hurt them without them hurting you. That’s it. That’s all it boils down to. There is no block button or attack button. It’s Hydlide back from 1984 all over again. This sucks, since you spend so much time down in that dungeon. It all just comes down to luck. Even Hydlide had more options, since it at least had an attack and defense mode. This turns a bad point-and-click adventure game into pure misery.

I see this screen every time I close my eyes now.

That dungeon will kill you a lot. Dying in Unicorn Dungeon absolutely sucks. See, despite being a small and simple game, Unicorn Dungeon loads all the time. It loads when you die, which then takes you to the death screen, and then it loads again to bring you back. It loads every time you enter a room. This is a huge problem with how often the Dungeon of Bullshit will kill you. I probably spent more time on a loading screen than I did making progress in the game.

Unicorn Dungeon wanted to be funny but ended up only being a joke of a game. Its visuals are terrible, the combat is some of the worst ever, and the writing falls flat. There is not one aspect this game succeeds in. Absolutely everything is terrible. Sir Typhil of Brokengamedesign can ride his unicorn into hell. Now excuse me, I think I will go get wasted and play Ride to Hell: Retribution because that is a more enjoyable experience than Unicorn Dungeon.

Unicorn Dungeon wanted to be funny but ended up only being a joke of a game. Its visuals are terrible, the combat is some of the worst ever, and the writing falls flat. There is not one aspect this game succeeds in. Absolutely everything is terrible. Sir Typhil of Brokengamedesign can ride his unicorn into hell. Now excuse me, I think I will go get wasted and play Ride to Hell: Retribution because that is a more enjoyable experience than Unicorn Dungeon.

Austin Fern has been playing video games his entire life. The first console he truly fell in love with is the PlayStation 2 with Sly Cooper, God of War, and many others really leaving an impression. He enjoys all genres of games from FarCry 5 to Danganronpa and everything in between.
Related Articles: Indies, unicorn dungeon
Share
Tweet
Share
Submit