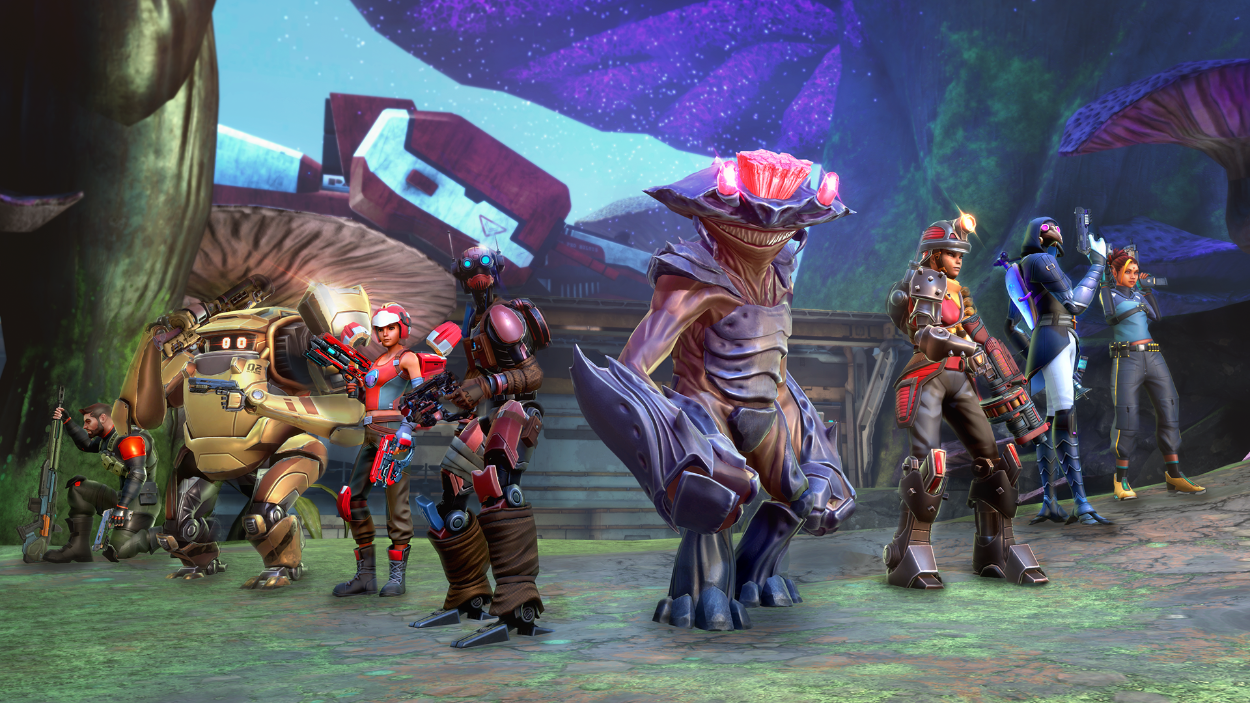 Some games are great one-time experiences, and then there are those that you could play for hours and occupy your mind contemplating strategy even when you have to step away for a while. Impulse Gear’s Larcenauts is an engaging hero shooter that rather quietly arrived on the VR scene last week, but it has quickly attracted the attention of VR gamers.

Featuring eight specialists with different abilities, matches are incredibly fast-paced 6v6 competitions that take place on one of four different immersive maps. While at times it can feel like certain characters are incredibly overpowered, it’s important to remember that your survival in the Ludus galaxy relies on teamwork.

There are definite similarities to Blizzard’s hero shooter Overwatch, and one of the key things learned from that game is the fact that players with skills such as healing don’t necessarily need to be the best at shooters. As with any great team-based class shooter, the crew members brought together by Captain Eleanor Kas come from all walks of life and must learn to cooperate before they can plan heists and gather riches.

Usually trailers tend to over-hype games and if you watch the trailer above, it’s good but definitely nowhere near as exciting as the actual game.

In fact, from the moment you spawn into the home area, you’ll find plenty of things to pique your interest, including a loadout area, loot boxes, social options, a store, and more. Once you’ve explored that area, you can queue up for a match and you’ll meet your crewmates. You can also party up with friends, but either way you’ll have an opportunity to chat with the crew and discuss your strategy before the match begins. Regardless of the game mode, matches are fast-paced and get your heart pumping, lasting about 8 minutes. Your crew then regroups in a holding area before the next match begins.

Each of the eight specialists has unique abilities and ironically, people in the budding Larcenauts community are already complaining equally about each of them, which probably indicates that they’re pretty well balanced.

Characters can be upgraded as you progress through the game and earn notoriety.

Evander Corso, codename Crypsis, served in Special Covert Operations after graduating from an elite military academy. He served in the Reconnaissance, Pathfinding, and Intelligence Department of the United Solar System (SCORPIDUS), but left abruptly after a situation during a classified operation on Anderson 9. Evander uses a small, energy-based trap that can startle enemies and hold them in place until his crew has a chance to eliminate them. He’s also an expert with the sniper rifle. 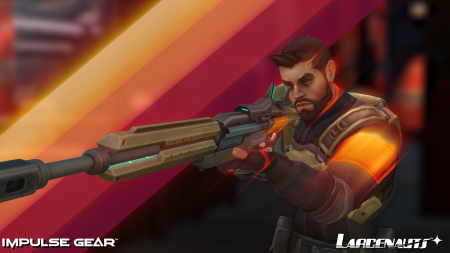 Calima Marcela uses her speed to dart around the maps, escaping danger or surprising the enemy with her sudden appearance. Although she’s rather small in stature, her speed gives her a great advantage and she also wields a smoke grenade that provides a useful visual barrier in battle. Since this is the first specialist unlocked when you join the Larcenauts crew, you’ll see many Calima specialists darting about. 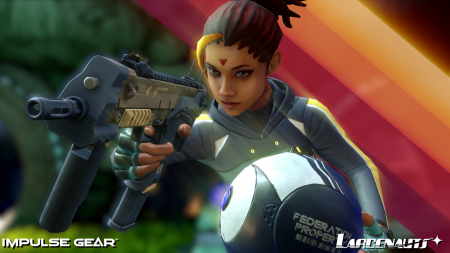 Chi, a member of the birdlike race known as the Cathartl, comes from a distant planet in the Ludus galaxy. Captain Kas saved Chi’s life and repays the debt by producing a regenerative field that heals all surrounding allies with the mysterious Ghilani leeches, a form of semi-intelligent slug-like aliens. Chi provides a support role that can mean the difference between victory or defeat. 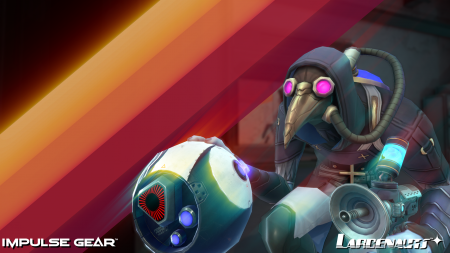 Lexi Salters comes from a deep space mining colony so she serves as the explosives expert on the Larcenauts crew. She comes across as a bit rough, but she’s actually eager to make friends with the rest of the crew and serves an important support role with her devastating grenades that can take out entire enemy teams if they’re not careful. 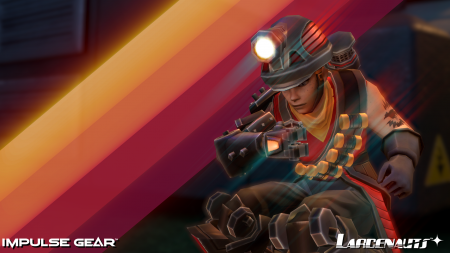 Although he kind of looks like a huge rock, Thal is an adorable robot who Captain Kas found in ancient ruins on a Sartes System planet. He was found completely dismantled and deactivated, but Bosun was able to bring Thal back to life after years of tinkering and reprogramming. Thal is helpful in battle with his hand-mounted, protective, energy-based shield. 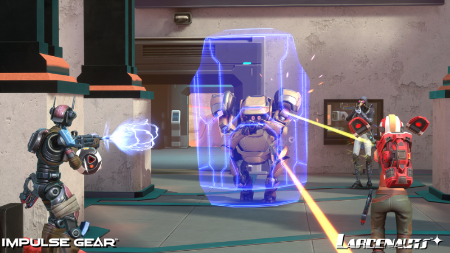 An adolescent Bosun was raised aboard the Palinurus 2 spaceship with her parents and Captain Kas. As she enjoyed adventures throughout the Ludus Galaxy and learned how to use her natural engineering skills throughout her youth, she had the ultimate experience of education through experience. Her parents are now retired and Bosun took over their roles of cook and Chief Engineer. Bosun’s preferred weapon is the ML Blaster, a custom-made laser weapon that can be overcharged for greater effect as a slow-moving explosive plasma charge. 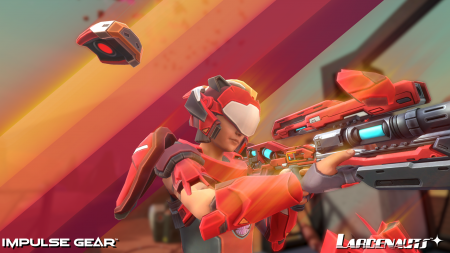 Some described VOD as monstrous when they initially discovered him lurking around the flora of a laboratory on Mycos, but he actually has a kind heart and seeks peace. VOD relies largely on brute strength to eliminate the enemies, who quickly come to understand the acronym behind his name – Very Obvious Danger – when he punches them in the face. There’s still so much to discover about this quiet member of the crew who can only communicate via sounds, growls, and gestures. 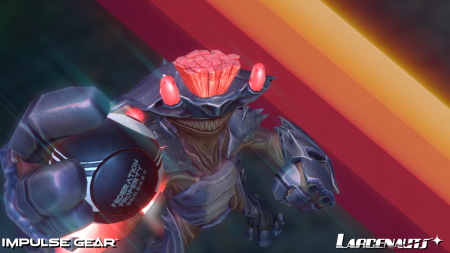 ARC-L6 has served as a mercenary for hundreds of years. The android soldier comes equipped with Prio Plasma Proximity (P3) Charges that detonate when enemies stumble upon the holographic trip wire, which is sometimes difficult to avoid when you’re darting around the map trying to avoid death. ARC-L6 is a heartless killer. 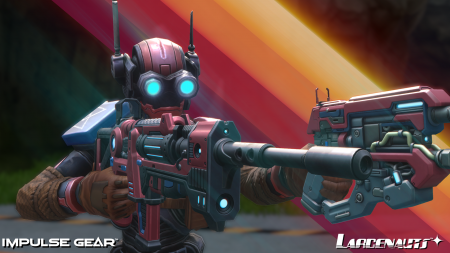 You’ll experience three game modes in Larcenauts:  Refuel, Uplink and Deathmatch. Each of these offers unique challenges and entertainment. It’s also fun to experiment with different specialists who might be more help in some game modes than others. You can switch specialists if you die.

Refuel is basically a point capture map so your team must coordinate to capture each point on the map and then decide whether to leave specialists there to defend that point or go together to the next one. This is an incredibly fun mode, but communication with your team members is quite helpful.

Uplink is my favorite mode because I currently play as the Calima specialist, and it’s a lot of fun to grab the drone and try to make it safely to the uplink point as your heart races because you know there are enemies around every corner  . If you have a good crew with you, they’ll protect you and the drone while the uplink goes through. Communication and teamwork are essential to this one.

Many people enjoy Deathmatch, where the objective is to reach a certain number of kills before the other team. I prefer the game modes that require a bit more teamwork, but Deathmatch is popular because specialists can really show off their skills and rack up kills.

Also called levels, the four maps in the Larcenauts universe are appealing and have plenty of nooks and crannies to explore, if you can stay alive long enough to do so.

Relay is located in Sector 2-G, a remote area of the galaxy. The relay station has been abandoned for many years, but you can still find fuel caches and the communications tower is active. 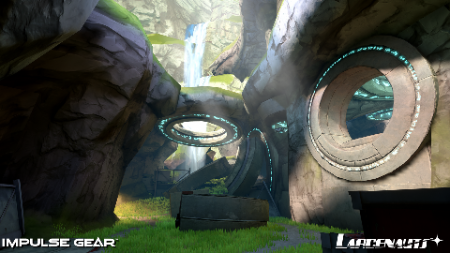 The Excavation map is located on Planet Gantija and it’s one of the most dangerous places the Larcenauts visit because you can easily fall off the side of a cliff or accidentally over a staircase while running away from enemies. Since the Larcenauts crew doesn’t have the same ability to fly as Echo units in Echo VR or glide to safety like seekers or agents in Population: One, you might want to stay near the center of this dig site. 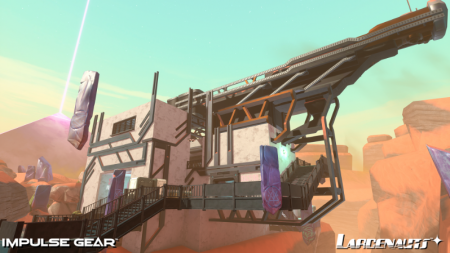 Blight is a located on the Plant Mycos, indigenous home of VOD. The planet puts out ethereal vibes with its giant mushrooms, attractive fungal colors, and miasma. You can find Station Van Dijk in the center of this map, where Dr. Van Dijk originally observed VOD lurking around his station and made it his mission to document the species. 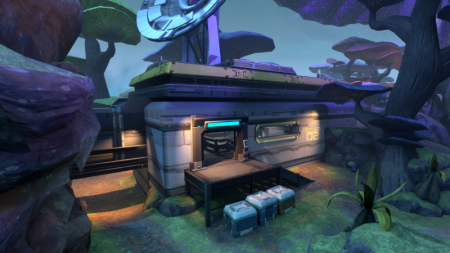 If your team is sent to Hazard Pay, you’ll need to be careful where you step because you might find yourself in a battle on some wooden planks with no railing or falling off a rockface where workers mined the critical resource Ucaultium without any regard to safety on this treacherous outpost. Hazard Pay is located in the Karaz Belt and someone needs to set up some virtual safety training before the miners who built this world are allowed to create another. 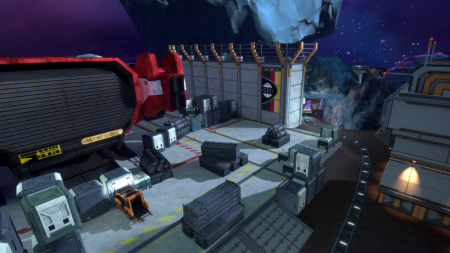 Larcenauts is available on all major VR headsets, but it seems to run best on Oculus platforms. In fact, it actually only lists Oculus Rift as a supported platform if you purchase through SteamVR. I played on an Oculus Quest 2 and the only issues I experienced with performance were related to parties, which could also be an Oculus platform problem rather than something with Larcenauts specifically.

Bear in mind that I play the game on an Oculus headset and have experienced very few issues so my review and score reflects that experience.

Typically I focus on esports titles and initially I downloaded Larcenauts with the intention of evaluating it for potential as a competitive VR title. Although private lobbies, one thing that would be necessary for esports competitions, won’t be available until later, I greatly appreciate the fact that you continue to play with the same team until you actually choose to leave that group. As crew members leave, they’re immediately backfilled with other players or bots. A few people have complained about the bots, but I couldn’t tell the difference between who was “real” or a bot. They were all either helping me or shooting at me.

The game can be played seated, which is incredibly important for VR enthusiasts such as myself, and it’s also great to see engaged communities with multiplayer games and you can find other Larcenauts fans on Discord and Facebook.

Larcenauts provides heart-pounding thrills as you fight for loot with a crew of other specialists in distant locales of the Ludus Galaxy. This is the VR team-based class/hero shooter VR needs!

Sonya is a respected journalist in the field of VR esports. She was the first female player to qualify for the VR League North American Regional Championships, as well as the first seated player in the league. Sonya is founder of VR Community Builders, a non-profit company dedicated to positive, inclusive environments. She has 5 grown children, has written 8 books and lives in Southeast TN.
Related Articles: Larcenauts, VR
Share
Tweet
Share
Submit