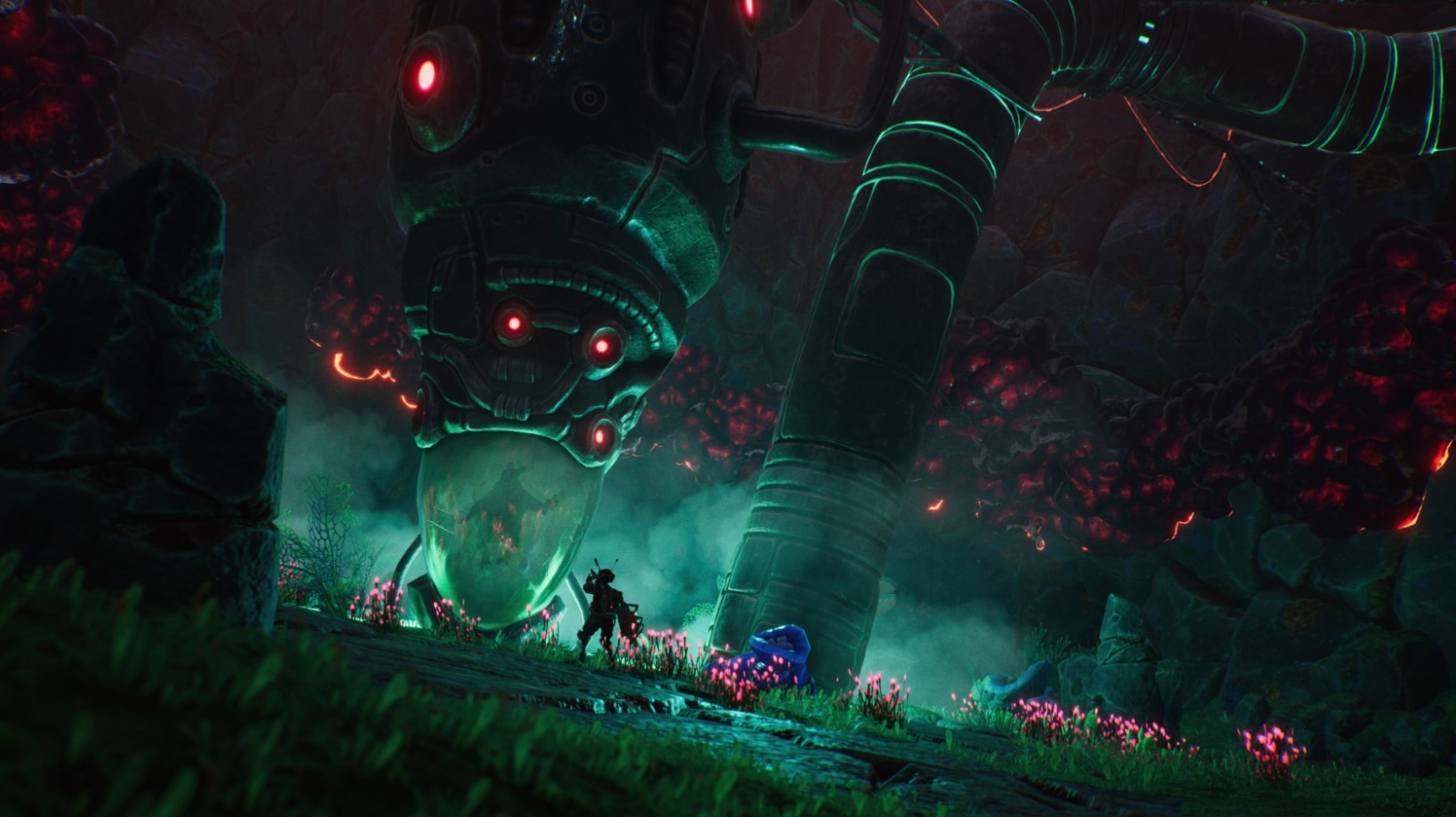 Rani and Becks are poor scavengers teetering uncomfortably close to the edge of becoming destitute. Their ship is falling apart, they are running out of food – and even worse, beer – and they have no prospects on how to change their ill fortune. That is, until Becks picks up an energy signal on an isolated and seemingly uninhabited alien planet. After some prodding, Rani convinces Becks to land. Immediately it becomes apparent that there is more to this planet than expected and what follows is a charming, albeit rather short, adventure.

The Gunk is a game about, well, cleaning up gunk. The world you land on is covered by a strange parasitic goo that is slowly killing all life. Rani, armed with her trusty vacuum glove and scanner, sets off on a mission to liberate the land from the gunk and restore its natural beauty. The main thrust of The Gunk is exploration. Rani is brimming with curiosity and can’t help but explore every nook and cranny of the new world she and Becks have found, which quickly leads to her becoming embroiled in a much larger adventure than she could have ever planned. 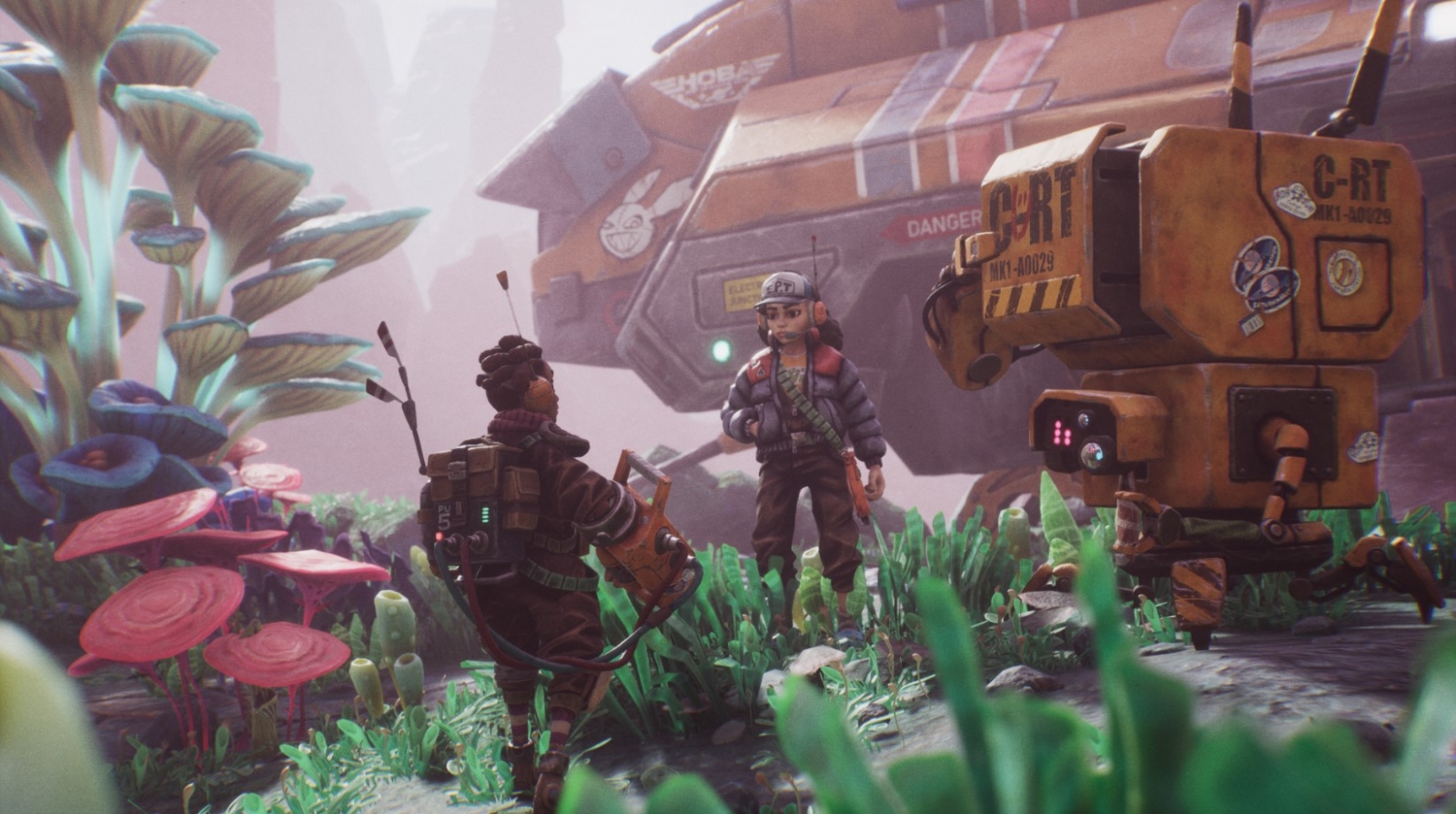 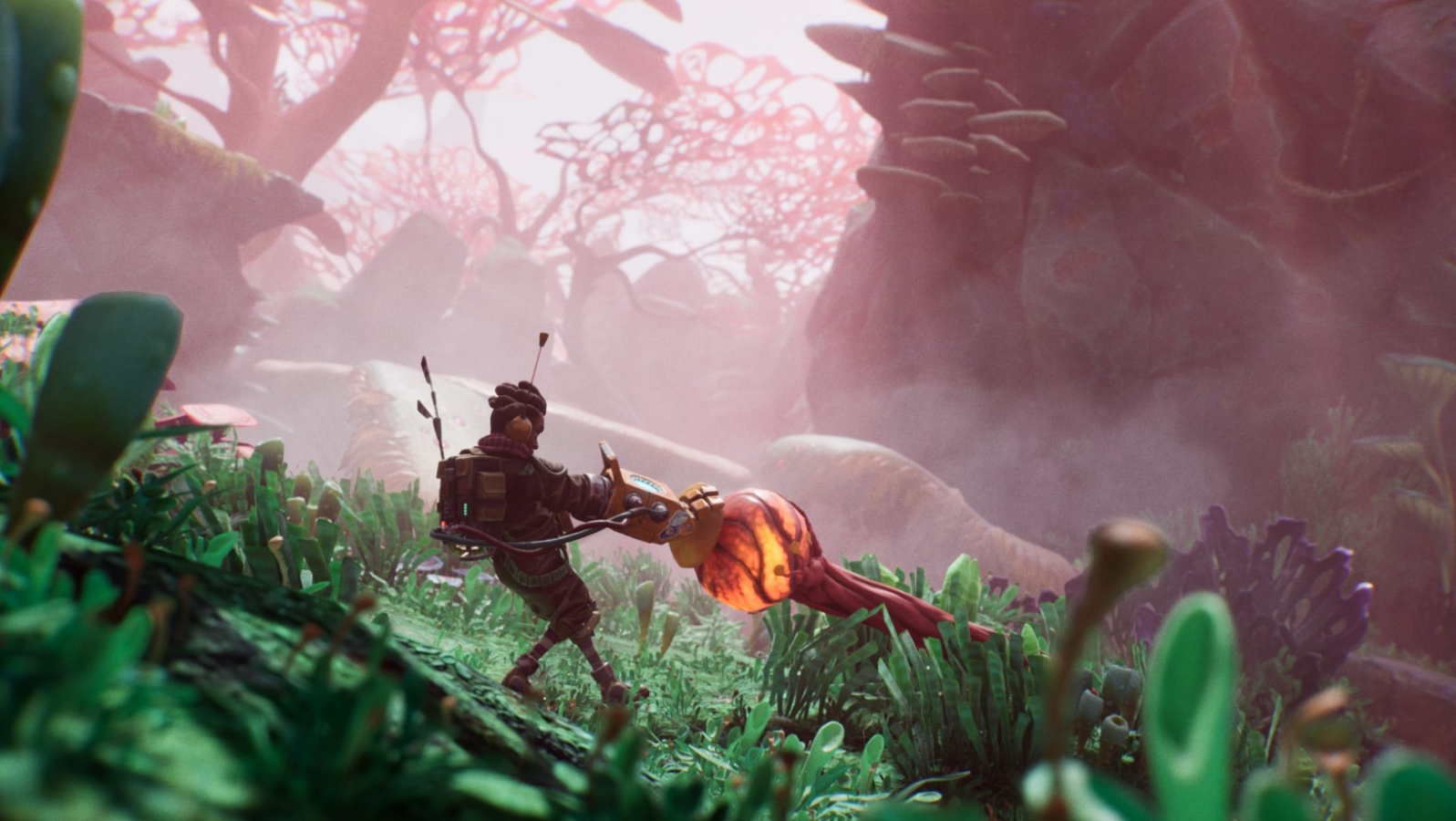 While players control Rani and spend most of their time with her, she is only one part of a team. Becks serves as a great counterpoint to Rani’s impulsiveness, attempting to calm Rani’s penchant for seeking out danger while also encouraging her need for exploration and the team’s need to land a big score to crawl their way out of their current downward spiral. Their quick witted back and forth banter makes up a large chunk of the game’s dialogue and anchors the narrative. It’s a testament to the developers how well a game with so few characters is able to invest players in their world, held together by Rani and Beck’s realistic friendship which teeters between friendship, anger, frustration, desperation, fear, and hope.

The Gunk wastes little time with set up, quickly sending Rani out into a surprisingly large world, which – while technically linear – does a great job of presenting the players with a plethora of twists and turns to explore which prove to make the game feel far more open than it really is.

While there is a small amount of combat, which ramps up in both difficulty and consistency as you progress, the main focal point of The Gunk is exploring and uncovering the world’s mysteries. Using her scanner, Rani can scan nearly every item she encounters to gain insight into its origin, value, composition, and usefulness. Each scan earns Rani EXP, which in turn unlocks new upgrades which can be unlocked at the ship’s workbench using materials.

There are four different types of materials to collect: metal, fiber, alien, and organic. These are found from plants, enemies, and stashes scattered throughout. Exploration is critical to finding enough materials to unlock all upgrades, although only a couple upgrades are needed to actively progress in-game. Upgrades can increase your ability to take damage, allow your glove to grab, carry, and throw objects easier, allow you to run faster, fire a plasma burst, create decoys to lure enemies, and more. While the variety of unlockables are appreciated, I used very few during my playthrough aside from the base glove abilities necessary to progress. 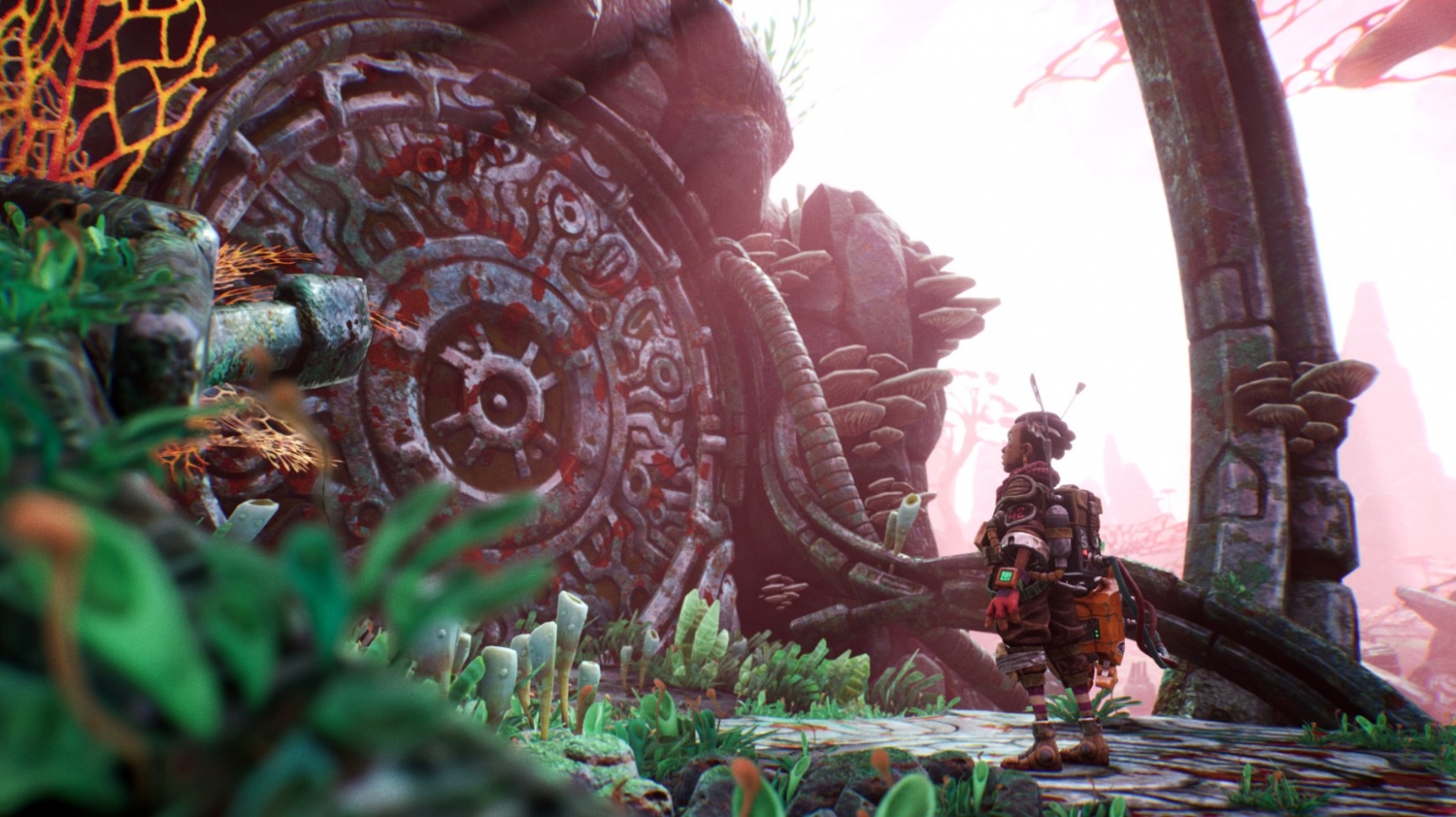 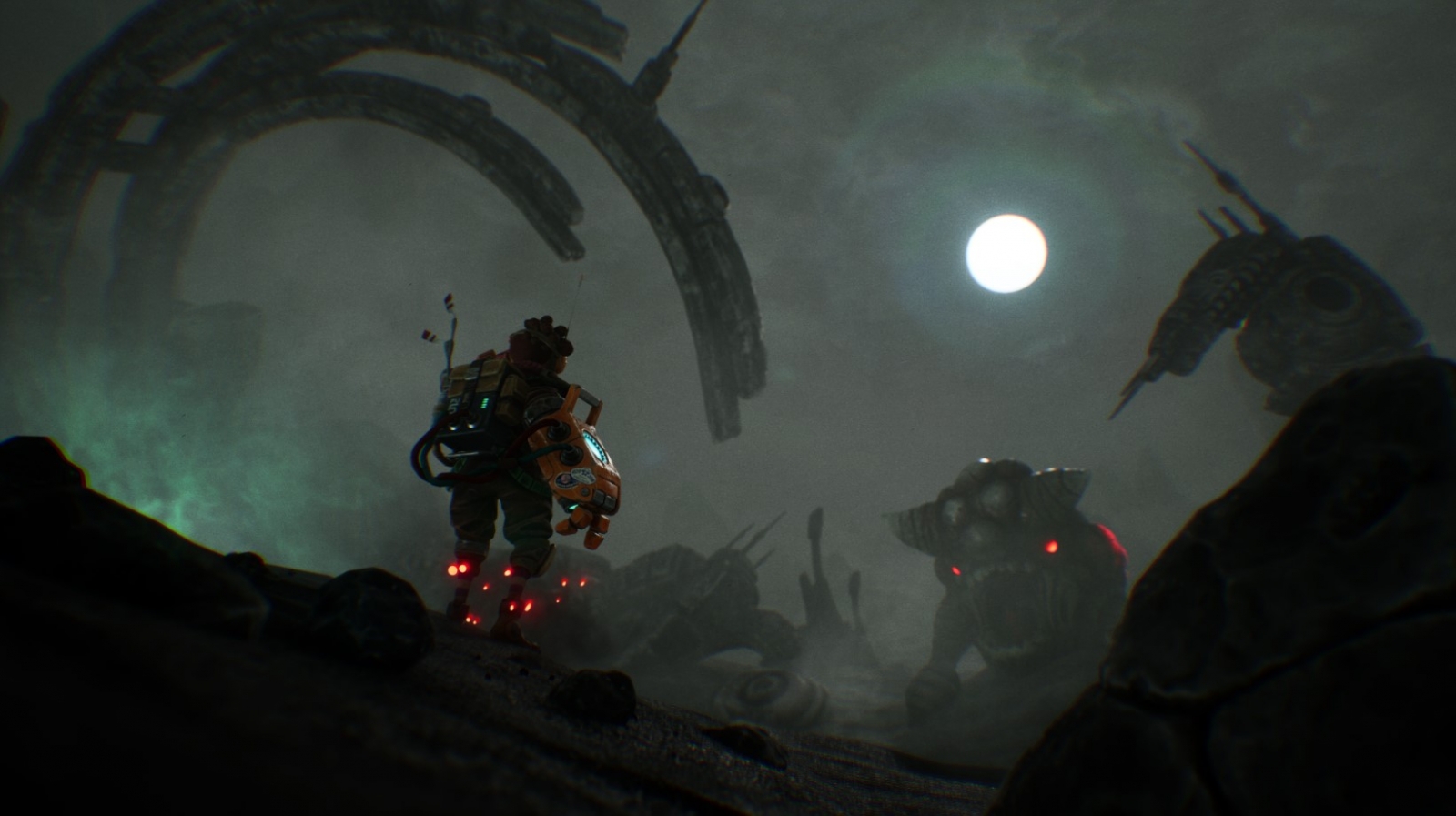 Progression is blocked by gunk and various obstacles which involve the use of your glove’s abilities to clean. Gunk is handled by vacuuming it up – which never stops being fun – and when all the gunk from a particular area is cleared the world will rejuvenate, bringing color back, sprouting plants, and clearing pathways which were previously blocked. While vacuuming up the gunk is straightforward at first, it becomes increasingly more complex as you progress through the chapters, eventually hiding enemies and traps in its midst,keeping players on their toes to avoid taking too much damage.

While The Gunk doesn’t have a health bar per say, it does show damage taken via the screen and the more damage taken, the darker the screen gets. To regenerate your health, you must escape the confines of a gunk infested area and find fresh vegetation. There is an upgrade which will allow you to take more damage before failing, but rarely is damage a concern until maybe late game. As previously stated, the focus of the game is mainly on exploration. You’re far more likely to fall off a ledge during a platforming section than you are to die by the hands of one of the sparsely found enemies.

Each chapter of the game, of which there are nine, tends to introduce a new mechanic. While at first the gunk is all you must contend with, eventually you’ll be using your plasma blast to open doors, your vacuum gun to throw exploding plants, and harnessing wind to spin bridges. Everything feels intuitive and natural, rarely does the game ask you to do anything which it has not adequately prepared you for. The Gunk does a great job with slowly building its mechanics before typing them all together, making traversing through its lavish world fun and exciting. 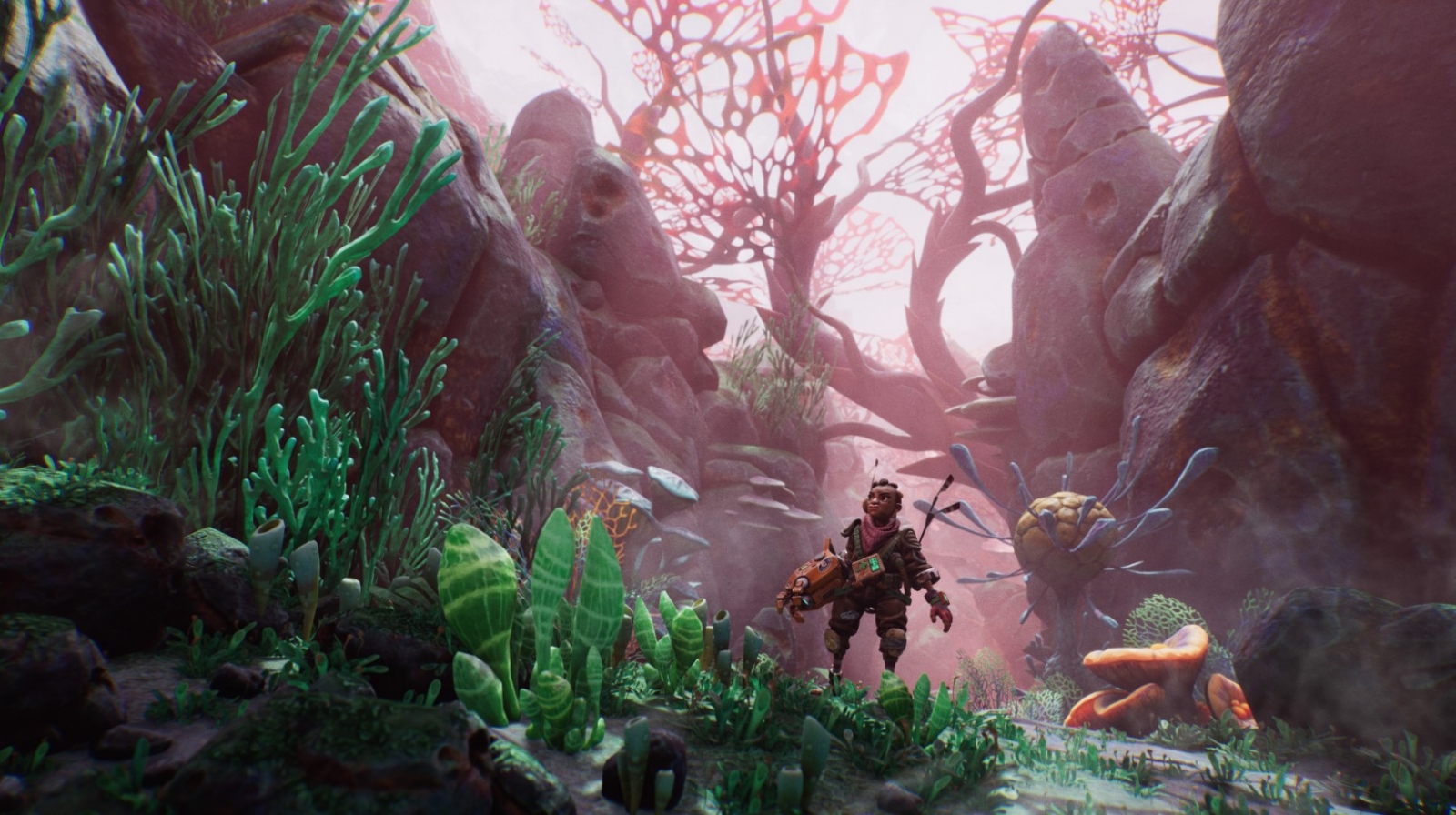 Since you can only upgrade from your ship’s workbench, you must travel back and forth quite often. Thankfully this is made easier by the placement of beacons in each chapter, which serve as a means of fast travel. Returning to your ship also gives you a good reason to check in with Becks, and to a lesser extent CURT, your well meaning but ultimately broken robot friend who can only repeat “you got served” over and over again due to Rani and Becks lacking the materials needed to fix him. These moments of respite from exploration and clearing gunk help flesh out Rani and Becks’ friendship, even if they never dive too deep into their past.

While The Gunk is ultimately enjoyable, there are a fair bit of technical issues. The game is beautiful to look at, and the oozing, foreboding gunk is appropriately slimy and off-putting, but graphics do tend to take a bit to load, especially after fast traveling. I spent several moments staring at a blank wall before the textures slowly appeared. That said, once everything is loaded, I never noticed any further problems. The main issue I encountered was getting stuck on pipes, walls, and well – everything. If you step anywhere the game doesn’t want you to, which is easy because there are a lot of areas that the game doesn’t want you to go despite being able to easily reach, you will essentially freeze in place. Spinning and banging buttons will normally free you, but it happened far more than I would have liked and became frustrating in areas where platforming is a necessity.

The Gunk is a creative, witty, and charming adventure game, albeit a bit on the short side at only five or six hours in length. Still, the writing, world, and exploration more than make up for the short campaign as players will find themselves immediately immersed in the world and Rani and Becks’ friendship. Unfortunately, a few technical problems plague the game, the most blatant of which – getting stuck on various items – becomes frustrating in later platforming sections. Still, The Gunk is an adventure well worth partaking in.

Richard Allen is a freelance writer and contributing editor for various publications. When not writing for Gaming Trend you can find him covering theatre for Broadway World, movies and TV for Fandomize, or working on original stories. An avid retro gamer, he is overly obsessed with Dragon's Lair. Chat with him via @thricetheartist on Twitter and @richardallenwrites on Facebook and Instagram.
Related Articles: the gunk
Share
Tweet
Share
Submit