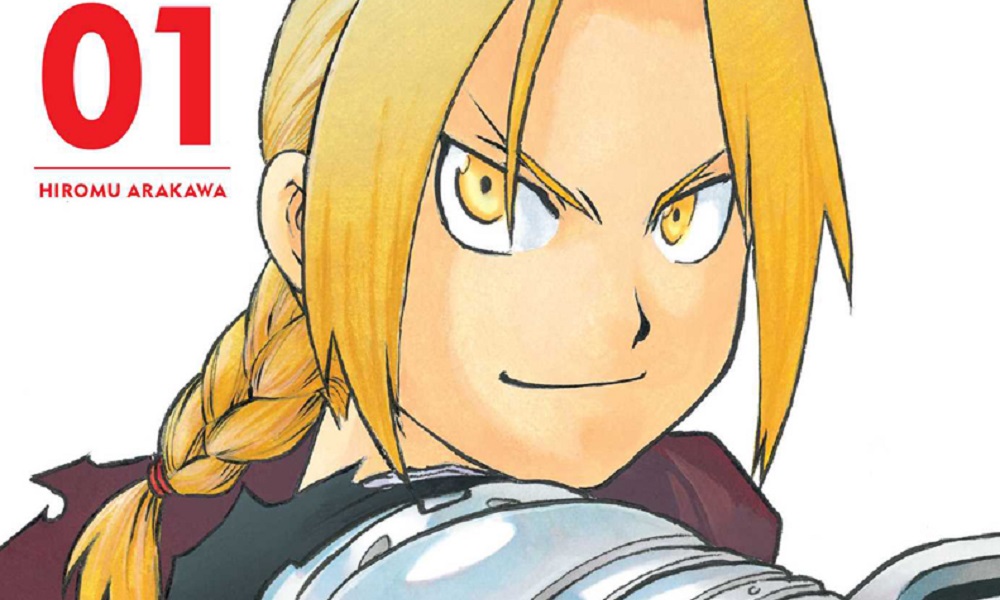 While I’ve been a big shonen fan since the mid-2000s, I didn’t really keep up with Fullmetal Alchemist. While the premise was pretty entertaining, I somehow skipped on most of the manga and anime when it was released. A little over seven years after the original manga’s run in North America, Viz Media has re-released the series in quarterly Fullmetal Edition omnibus packages, with oversized pages and a hardbound design. Whether it’s your first time in the world of the alchemists, or if you’re revisiting the series, now’s a great time to jump in.

Fullmetal Alchemist stars Edward and Alphonse Elric (known hereby as Ed and Al) as they try to find the philosopher’s stone, a powerful artifact that is said to allow any transmutation to occur without the cost of equivalent exchange. When they were younger, Ed dabbled with a forbidden form of alchemy to bring the Elric brothers’ mom back to life, which unfortunately caused Al to lose his body and Ed to lose his arm and leg. (This act also brought back something that was… a little too grisly to describe here.)

Throughout this expanded volume (that includes the first six chapters, which equates to 1.5 volumes), the brothers go out assisting those in need with their alchemic powers, from exposing a priest in a false religion to a mining area in danger of closing. We’re also introduced to some of the main antagonists of the series, the homunculi, as well as some of the supporting casts, most of whom are fellow state alchemists.

Because this Fullmetal Edition only adapts one and a half volumes of the story with each release, we’re treated to a cliffhanger against the mysterious Scar. Perhaps this is the only real problem I have with this edition: It will inevitably cut off at certain halves of volumes, and it might make for inconsistent pacing if you’re reading the series for the first time through these releases. The first chapters are also rather formulaic, so it might take a few more volumes to heat up (personally, I found myself engrossed after the third chapter of the series). On the bright side, this does mean you’ll get to see the context of that Nina/chimera meme that’s been so popular recently. Other than that, the first Fullmetal Edition is an adequate beginning of a classic manga.

My friend’s been sending me Nina memes, and now I get it.

While the series has been re-released in the form of 3-in-1 volume paperback trades, those books are rather flimsy and can’t take a beating (though still great for travel). The Fullmetal Edition, on the other hand, is a durable and rather large tome, with archival-quality pages in an oversized format. You can feel the hefty weight of the hardcover, and it’s overall pretty sturdy. The pages are glossy and thicker than the 3-in-1 releases, and it feels great to flip around the pages, oddly enough.

There are some included concept sketches and a handful of color pages for those interested, which is a nice little bonus for those that need a little incentive to double dip. However, with a paltry $19.99 price tag (compared to the $14.99 lesser quality 3-in-1), this book oozes quality and is a definite recommendation for anyone willing to try something new or for the FMA fan in your life. Future volumes will be released on a quarterly basis, so you won’t have to wait too long for the next release (which will be available this August).

The Fullmetal Alchemist Fullmetal Edition is a great way to introduce yourself to the wonderful world of alchemy. With a quality re-release of the first 1.5 volumes, you should make an equivalent exchange with your wallet and fork over your $20 right now.

Elisha Deogracias is an aspiring accountant by day, freelance writer by night. Before writing for Gaming Trend, he had a small gig on the now defunct Examiner. When not being a third wheel with his best friends on dates or yearning for some closure on Pushing Daisies, he's busy catching up on shonen manga and wacky rhythm games. Mains R.O.B. in Smash. Still doesn't know if he's a kid or a squid.
Related Articles: Beyond the Page, Fullmetal Alchemist Fullmetal Edition Volume 1
Share
Tweet
Share
Submit