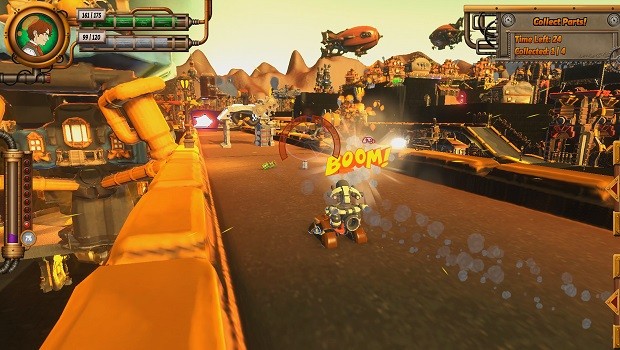 I don’t know what to think about indie games sometimes. On one hand, they’ve made it possible for some excellent games, including a spiritual successor to Myst, my favorite game of all time, to see the light of day. On the other hand, it’s like the era of shareware has returned in full force with a litany of half-baked games illuminating my PC monitor. The best thing I can say about Goggles is that it possesses a fun, charming spirit that is sorely lacking in many video games today. The rest of the game, though, is far less charming.

Goggles is a quasi-sandbox game which places you in levels and gives you various objectives to complete. You take control of a variety of robotic vehicles, all of which are clunky and laborious to maneuver, and go about shooting stuff using a primary and alternate method of attack. One vehicle, for example, has a rocket launcher as its main weapon and a flamethrower as its secondary, to give you some flexibility between long range and close range targets. It doesn’t feel particularly good to shoot things in this game; there’s a noticeable lack of physics and weight to everything, and the sound effects are mostly flat and generic.

Your primary objective in each stage is to close a series of open portals within the allotted time limit. These portals are what produce the enemies you’ll encounter throughout the stage. Random objectives will also pop up and challenge you with various tasks, like killing a wave of enemies or escorting cargo in transport. Like the primary, these secondary objectives probably won’t do much for you because it consists of a lot of driving around and shooting which, as I said, isn’t anything to write home about in Goggles.

Theoretically the action should be more engaging during multiplayer matches where you’re faced with human opponents who would, hopefully, be more tactful than the computer AI. The problem is that this game doesn’t have any players; there was no one online the handful of times I checked the lobbies. Even if you have some friends you can convince to play Goggles with you, I have a hard time imagining the game inducing excitement for anyone.

The art style itself displays a spark of ingenuity and creativity not present in the other facets of the game, leading to levels that are quite interesting to navigate and explore. There’s also a lot of variety in the level design, ranging from a steampunk Victorian setting to a tropical island. The most enjoyment I derived out of Goggles was from aimlessly driving around and exploring the levels, putting the combat and objectives to the side.

Between stages there are comic style cutscenes which introduce you to the wacky characters and storyline. I would consider these another high point for the game as I found them to be funny in their own right. It’s not enough to redeem the gameplay, but it makes playing through it tolerable and almost worthwhile just to see.

From a technical standpoint, Goggles is also underwhelming, despite being developed with the ubiquitous Unity engine. A lot of the textures look muddy, for instance, sadly hiding much of the beautiful art rather than letting it shine. I also found the framerate to be inconsistent, which shouldn’t be the case considering how rudimentary the graphics are, despite the power of my rig. It’s plainly obvious to me that the game needs more development time.

There’s a charming game in Goggles that is unfortunately hidden behind a half-baked software release. While the art style is colorful and unique, the gameplay is flat and an important portion of the experience, multiplayer, has no participants. While I love the level design, it's not to recommend the game on.