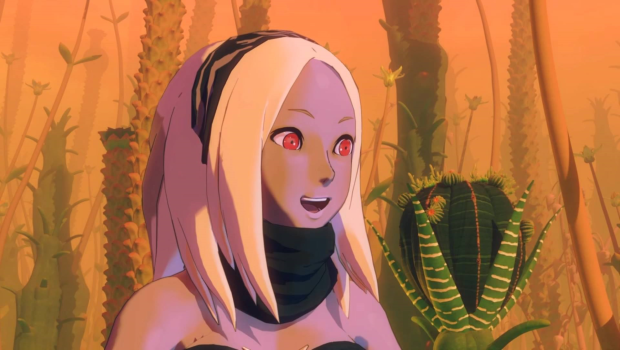 Japan Studio created magic when it brought the charming and lively character of Kat to life. Everyone’s favorite nevi-fighting Gravity Queen is back in Gravity Rush 2, and she hasn’t missed a beat. Her selfless, spur of the moment attitude is on full display as she seems to reach her full potential, in what is a fulfilling and enjoyable follow-up to her story.

Gravity Rush 2 picks up right where the first game (and follow up anime-short Gravity Rush: Overture) left off; if you are not already versed in the story of the series, the game might be very confusing as no backstory is given; experiencing the first game is definitely recommended. Gravity Rush 2 starts off in the new city of Jirga Para Lhao, where Kat, Syd, and Raven have been stranded following the events of Overture. The game contains three different stories, each with their own villains and endeavors. While the game does a great job with the story at the beginning, allowing ample time to meet the new characters and make new friendships, the story seems to fall off at key points throughout the game. While new abilities and a large open world create a fun and diverse game, frustrating camera control problems hold the game back from its full potential.

The story, while one that is overall entertaining and enjoyable, suffered from some of the worst pacing problems I have seen in a game. Most of the climaxes in the game seem to be rushed (no pun intended). This resulted in a lack of a sense of accomplishment, that I would have hoped for, considering the large stakes that you face in the game. This was especially prevalent in the third chapter, where the ending was extremely sudden, and left me confused as to what had actually happened. Along with bad pacing, several of the mysteries the game introduces do not have satisfying endings, if they have any closure at all. I found myself wondering what happened to a given character multiple times, which really diminishes the game’s story. It’s possible that, due to the quick pace of the game, these questions were answered but so rushed that I missed them, which doesn’t really make it any better.

I get most of my enjoyment from the Gravity Rush series from the characters, and Gravity Rush 2 is able to capture and surpass its predecessor in this regard in every way, expertly capturing the charms and quirks of each personality. While the characters in the first game were great, there weren’t that many of them, and they didn’t get as much development as I would like. The sequel contains a well-rounded set of new characters and provides a fair amount of time to discover and get to know each of their personalities, while still making time to show off almost all of the characters you met in the first game. Characters like Syd and Raven are finally developed fully and given enough time to really connect with players, while new characters, like Lisa and Cecie, are added to create even more relationships and depth for Kat.

The A.I. that is in the game is wonderful. The enemies are intelligent and responsive during battles, something I expected after playing the first game, but what surprised me was how impressive the games companions were. Fighting alongside Raven was a blast, and it felt like I had a real partner helping me through the fights, to the point where she even finished one of the bigger fights for me when I struggled. Besides being an amazing gameplay element, the A.I. helped create such an incredible bond between Raven and I, something that I felt was missing in the first game. Going in for a special move or even a basic attack and having Raven come over and join me to add bonus damage was a sight to see, helping to deepen my bond to her, and really adding to the overall experience.

When I played the first Gravity Rush, I kept hearing people say that they found the camera to be frustrating to use and that flying in the game was terrible, but in my own experience I found the camera to work just fine and found the flying mechanic to be a fresh and fun mode of transit. Unfortunately, in Gravity Rush 2 I’m finding myself joining the naysayers in agreeing that the camera is an unruly mess that significantly lowers the enjoyment of the game. There were times in the game where I had to stop what I was doing just to refocus the camera, which completely took me out of the moment. In some of the bigger fights, such as boss battles, I would have to stop attacking because I couldn’t see where I was going. This was detrimental to my survival, and the cause of most of my deaths in the game.

The diverse set of tasks that make up the surplus of side and main missions go a long way to helping the game avoid getting too tiresome. I never got to the point where I felt like the missions were getting too repetitive or that I was starting to lose interest in them. While some of the missions aren’t as impressive as others, all of them add a wholeness to the world and make it seem more lifelike and full. One mission would have you collecting ducks or tailing someone, while in the next mission you would be off to mine gems, or hack robots; this made the game stay fresh and new throughout.

The combat system seems to be very similar at first glance, giving you relatively the same skills and abilities as the previous title; however, the way that these moves are used and work feel much improved. In the first game, I pretty much used the gravity kick to defeat every opponent throughout the game, because the ability was far more powerful than any other attack. Japan studio has done a great job of rebalancing the skills and allowing you to use a wider range of attacks, such as the stasis field. This time around, the stasis field is much more powerful, and I constantly found myself using the field to throw enemies at each other. The inclusion of two new forms of shifting, Jupiter and lunar styles, helps to keep the game from becoming stale and allowed a myriad of ways for me to travel around the world or defeat enemies. The game avoids falling into the repetitive combat system of the first by adding enemies that are far easier to defeat when using abilities you get from the new forms. Some enemies that would be able to absorb a large amount of damage, normally, can be defeated in one or two hits while in the right form. Switching between all three forms during certain parts creates a fun strategy, and a feeling of accomplishment when it all works out.

Gravity Rush 2 far exceeded my expectations in its length and scale. The original game took me no more than 13 hours to complete in full, and I am glad to say that with the sequel Japan studio has doubled or even tripled that time. Encompassing a vast, ever changing world which is vibrant and full of life, the world of Gravity Rush 2 is far larger than that of the first. The ability to freely travel between areas makes traversing the world much more enjoyable than in the first game, where some areas were too far and traveling to them would require the use of unlocked manholes for fast travel, or transit vehicles.

The music of Gravity Rush does a remarkable job of setting the tone and feel for wherever you are in the game. Every time I switched from one area to another, the moment was enhanced by the changing of the music that was playing. Each area has its own unique theme that is used to encapsulate the
atmosphere of that particular district, which helped make every area feel alive and distinct from the last. During certain missions that involve multiple areas, the themes are replaced with songs more suited to the current mission, and they stick with you throughout the task. This really helps to instill a sense of intensity through some of the more distressing missions. Rushing to save someone wouldn’t have the same urgency if you were hearing the upbeat theme of the Pleajune district, for instance.

Gravity Rush 2 is a charming and fun game. The impressive AI does a fantastic job of building bonds between players and characters. A wonderful soundtrack alongside a wide variety of mission types come together to create a vivid and large open world. The game is hampered by poor camera controls and some hiccups in the story, but overall, the experience is one that I thoroughly enjoyed and will be playing again.

Zach has been a gamer ever since he picked up a PS1 controller and played Asteroids for the first time. From FPS games to Point-and-click adventures, Zach knows no genre that he can't get into. When not playing games, he spends his time looking at the newest computer components on the market and dreaming of a day when he can buy them.
Related Articles: Gravity Rush 2
Share
Tweet
Share
Submit