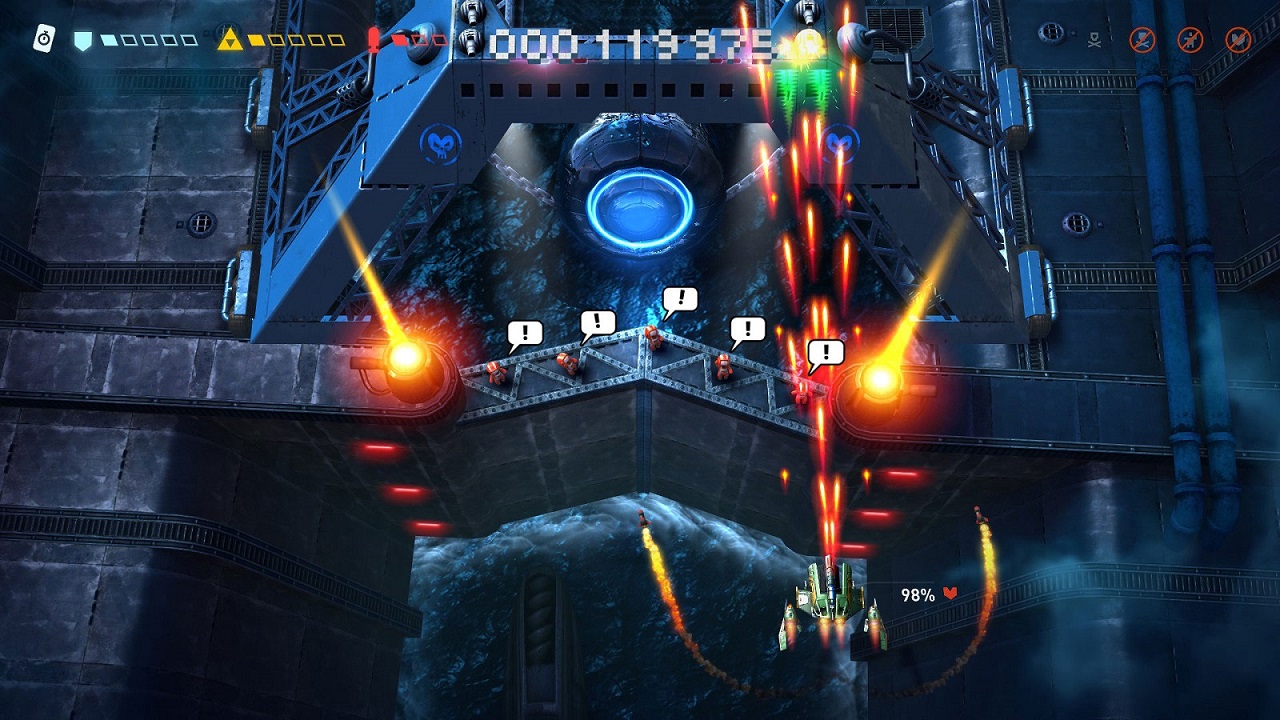 I have a confession to make: When I tried out Sky Force Anniversary on the PlayStation 3 a while back, I was less than enthused. After playing the first couple of stages, I was unsure what the hubbub was all about and shelved it away. However, with its “not really a sequel, not really expansion” successor Sky Force Reloaded released on the Switch, I got the chance to play it again, and this time I was impressed. While somewhat of a grind in the beginning, Sky Force Reloaded is a solid shoot-em-up that fits nicely on the Nintendo Switch.

A group of people stranded, waiting to be rescued? IT’S A TRAP!

Sky Force Reloaded starts out simple enough, putting you in the pilot seat of a souped-up aircraft trying to defeat enemy general Scarlett Mantis. During the prologue stage, you’re immediately defeated and the game proper begins. The game is a vertical top-down shoot-em-up where you pilot a ship across more than thirteen stages of high-speed bullet hell action. Your main weapon is initially a peashooter that you can upgrade as you continue through the game, with secondary weapons ranging from homing missiles that deploy every few seconds to smart bombs which must be bought or collected. Many stages end with a boss which you must dispatch in order to move on to the next stage. As you destroy enemies, you’ll earn stars that can be used in the in-game Hangar to upgrade various parts of your ship, from primary weapons to health capacity.

While the previous paragraph could describe almost every game of the shoot-em-up genre, Sky Force Reloaded really shines once it starts to differentiate itself. The game’s difficulty is brutal, and even early stages will prove tough without upgrading your ship, so grinding is entirely necessary. Each stage has four difficulties (normal, hard, and insane, with an unlockable nightmare difficulty opening up after the main campaign is finished) which will provide medals which are needed to progress to the next stage. You’ll get these medals from doing things such as destroying every enemy to rescuing some stranded humans throughout the playing field. I did appreciate how these side objectives fleshed out the experience and gave replay value to the stages themselves; thirteen stages are a lot for a shoot-em-up, and keeping the gameplay fresh with harder difficulties and more punishing enemies means you’re going to have a lot to enjoy. Grazing isn’t emphasized as much here, but with a healthy stream of bullets on later difficulties, you won’t notice the difference.

I don’t like sand. It’s coarse and rough and irritating, and it gets everywhere.

Speaking of which, the customization and progression systems here feel organic and enjoyable to use. While it does take some cues from free-to-play games (this was ported from a smartphone version, after all), the entirety of Sky Force Reloaded is with nary an in-app purchase, and instead relies on replaying stages. Since you can upgrade your ship with earned in-game currency (the aforementioned stars), each attempt at a stage doesn’t feel like a lost cause. Because it’s near impossible to try acquiring all four medals in one run of a stage, you can spend time on earning in-game currency here and there while replaying a stage again.

This is getting out of hand! Now, there are two of them!

The progression system feels very satisfying, and you never feel like any purchase is a waste as each one helps you inch further to success with each upgrade. Aside from earning medals and completing stages, you can also unlock different ships with new abilities to fit your playstyle (such as ships that offer concentrated bullets at the cost of weapon range or ones that can shorten rescue time). Cards that can give you temporary or permanent bonuses (such as support drones or a permanent discount at the Hangar) are also dispersed after some time, so there’s an incentive to go back and replaying a stage. It’s these tweaks in the gameplay that expand Sky Force Reloaded (and at a $9.99 price tag, provides plenty of bang for your buck).

BLOW THAT PIECE OF JUNK OUT OF THE SKY!

The grind feels like a double-edged sword, however. At first, you’re a powerless classic ship with no real way to progress except by getting mercilessly destroyed and picking up as many stars as you can. By the time you reach the third stage, you can put up a fight with your unlocked upgrades, but the first hour or so feels a bit monotonous since you’re forced to grind at the easiest stages in order to advance to the next ones. It doesn’t help that later stages require you to earn medals on higher difficulties to proceed, so unless you’re relatively skilled, you’re going to have to grind for more upgrades. Even then, the game almost forces you to upgrade at times, since default bullets can only go so far. The beginning of the game is more of a slog than anything else, but once you open up the possibilities, the game gets much more entertaining.

The presentation and other elements of the game fit well for the Switch. While it can get downright sadistic on later stages, the game holds a tongue-in-cheek approach to the whole package, with flavor text on the cards as well as pilots offering some humorous commentary contrasting with the serious nature of bullet hell. As an example, one of the unlockable pilots you can obtain is named Gringo Star (a play on the slang term as well as the famous drummer), who places a random crate in a stage with stars. If there was one element of the game that was a bit too cheeky for me, it would be the voice acting that peppers the stages; it’s not deal-breaking, but it will become grating, especially if you keep dying on boss battles. However, the gamer runs at a buttery smooth 60 fps, and while not the most gorgeous looking game on the console, still keeps up even with the bullet spray on-screen. Other than the main modes, you can also participate in weekend tournaments in order to flaunt your mastery against others, and can bring a friend with you in a co-op mode in case a stage is proving to be a bit tricky for you.

Sky Force Reloaded is a great shoot-em-up for the Nintendo Switch, and is enjoyable for the hardened veteran and newbie alike. The intense gameplay and enjoyable progression system just kept me coming back for more, and will provide hours upon hours of enjoyment.

Elisha Deogracias is an aspiring accountant by day, freelance writer by night. Before writing for Gaming Trend, he had a small gig on the now defunct Examiner. When not being a third wheel with his best friends on dates or yearning for some closure on Pushing Daisies, he's busy catching up on shonen manga and wacky rhythm games. Mains R.O.B. in Smash. Still doesn't know if he's a kid or a squid.
Related Articles: Indies, Sky Force Reloaded
Share
Tweet
Share
Submit