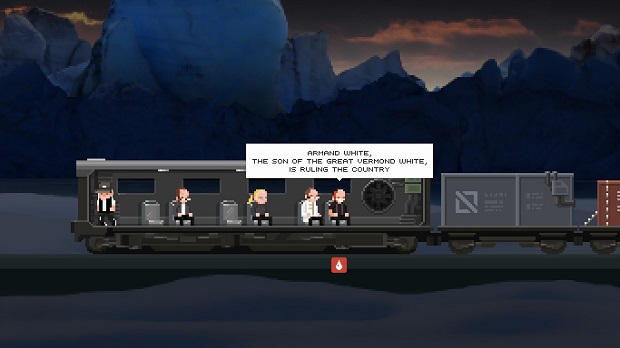 When you think of the post-apocalyptic genre, what are the staples that come to mind? Zombies, government conspiracies, improvised weapons? What about trains? Though they may seem unconventional or out of place, they’re not the only thing that makes The Final Station fascinating and unique.

The game opens with you waking up from a bad dream and preparing to serve as a train operator traversing the disjointed nation. An event collectively referred to as the First Visitation happened 106 years ago, and the world seems to be on the precipice of a Second Visitation. As a result of capsules falling from the sky and releasing a mysterious gas, humans have been turning into black, drippy monsters, much like zombies. Communication is dismal, with TVs on the fritz and many government soldiers unaware of what’s going on; in spite of everything you follow your orders, delivering cargo and scooping up survivors when you can.

Some levels only involve listening to NPCs and visiting the occasional shop, but most let you explore desolate cities, striking down monsters and hunting for supplies. You aren’t taught the controls, though many of them you’ll know intuitively from playing other PC titles, and you aren’t shown how to fix your train when it malfunctions. The only thing the game teaches you outright is how to melee attack; yes, thankfully you aren’t stuck wasting all of your precious pistol ammo when you miss shots out of fright. You can also find items in the environment – chairs, boxes, sometimes toilets – to throw at enemies.

When traveling, you have the chance to craft ammo and medkits, tend to your passengers’ dwindling health and hunger bars, and manage the different parts of your train. It’s fairly easy to keep people alive, except for those you invite aboard with bleeding head wounds, and it’s interesting to witness how they interact. The personality of a perpetual drunkard (who smuggled a few extra bottles with him) is vastly different than that of an insecure scientist.

You discover the story through notes left behind in buildings, encountering survivors throughout levels, chat messages, and snippets of conversation on the train in between locations. Unfortunately, mechanical maintenance and stopping to craft interfere with how much you overhear. I wanted to simply stand around and listen, but I had to pull a lever or monitor the cargo to keep the train from breaking down. That caused me to miss chunks of conversation; even if the information was inconsequential, I would’ve liked to learn more about the presidential lineage or how a certain city was reacting to another Visitation.

Much of the narrative in The Final Station is up to your interpretation, which I love. Even if you exclude the ending, which felt like a swift punch to the gut, this game is truly memorable. Because it’s so open-ended, it encourages discussion and formulation of theories, which makes the story stick in your mind much more than if it was cut-and-dry.

Personally, I believe this game makes a statement about human nature and how, even when faced with the ruination of everything you’ve ever known, most of us wouldn’t act valiantly. Some communities divide instantly, hoarding firewood from their neighbors, and some are merely striving for a sense of normalcy in the wake of tragedy. This often comes in the form of denial; people are still smoking on street corners and complaining about young people going to clubs. Government officials and research scientists put on a show like they care about the lives of their citizens, but selfishness and secrecy are rampant, even in the midst of global devastation.

The story of The Final Station is the core of the game, but of course it’s more than just a walking simulator. You have to fight off former humans, strategically rationing your bullets and medkits, and find the blocker code that will allow your train passage to the next town. You have the option of not entering further rooms or buildings once you have the code, but that also means skipping over the potential for story pieces, survivors, supplies, and intriguing sights.

Pondering the narrative was exciting enough for me, but I had a lot of fun with the action segments as well. Adapting to the game’s specific mechanics and learning what it wants you to do feels rewarding. When you get killed often enough, you start recognizing patterns, predicting what comes next based on building layouts, and planning a sequence of attacks. It never got boring, but it also ended when it should with a playtime of about 4-6 hours.

While it may look simple and even a bit silly on the surface, The Final Station is quite the captivating game. The story and survival aspects have been blended wonderfully, and it leaves you with plenty to mull over long after the credits roll.

Sarah Marchant is an office admin for a nerdy t-shirt company. She has a soft spot for indie games, a passion for story-driven titles, and a weakness for cooking games and anything with zombies.
Related Articles: The Final Station
Share
Tweet
Share
Submit