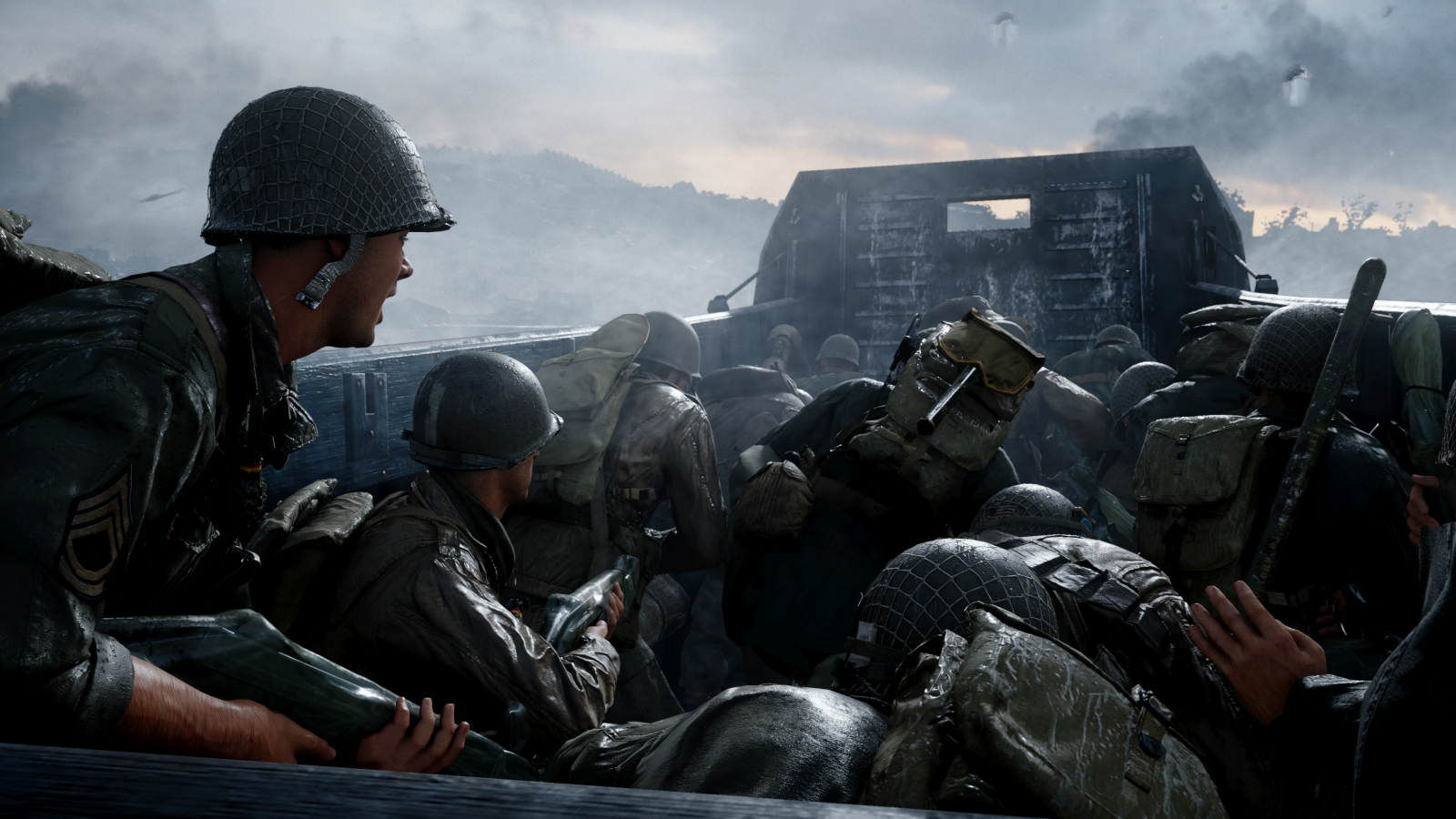 After nearly a decade of modern and futuristic warfare, the series returns to its roots and turns in one of the best COD games in years.

For first person shooter games, World War II has historically been more than just a setting, it has been an entire sub-genre. WWII games were already a big deal before the original Call of Duty came out, but the level of realism and visceral, in-the-moment gameplay that Infinity Ward brought to the table catapulted the genre into blockbuster territory, bringing with it a glut of similarly-themed games of varying quality in its wake. Eventually, the market got saturated, players got burned out, and the series (and shooters in general) moved on to even greater success with more modern settings. Now, nearly ten years after the last WWII-themed Call of Duty game (World at War), Sledgehammer brings the series back to its roots, delivering an experience that may be the most cinematic and realistic depiction of the European Theater in a game to date.

There is no greater benchmark for action and realism for these games than the first wave of the Allied invasion of Normandy (D-Day). I remember watching the Omaha Beach segment of Medal of Honor: Allied Assault at my first E3 many years ago and being blown away by it, but revisiting the footage now I am struck by how sparse it was – the machines running these games 14 years ago just didn’t have the horsepower to fully represent the massive amount of soldiers, bullets, and explosions that took place on that beach on June 6th, 1944. COD WWII’s campaign kicks the action off with this same battle, and the brutal gauntlet is nearly a note-perfect interactive version of the opening to Saving Private Ryan. It is also incredibly difficult, and as I zig-zagged my way through the chaos, dying over and over, it struck me that to a young GI at that actual battle, it must have seemed downright impossible. That feeling of being overwhelmed never quite reached those same heights as the game progressed, but the sensation of vulnerability stuck with me – I wasn’t playing a heavily armored super-soldier with a laser-guided energy rifle, I was playing a scared 19 year-old kid in wool combat fatigues and a M1 Garand rifle.

That kid is Ronald “Red” Daniels, a naive farm boy from rural Texas, complete with high school sweetheart, baby on the way, and tragic backstory that unfolds at a slow drip. He’s a bit of a walking cliche’, but his everyman appeal makes him the perfect character to ride along in. It’s the rest of his squad that drives the narrative, though, from the Jewish-American smartass buddy who sticks by your side through it all, to the conflicted Sergeant who’s trying to redeem his past on the backs of you and your squadmates. As the group fights their way through France and into Germany in some of the most historic battles of the war, they grow through victories and tragedies alike, and the resulting sense of brotherhood by the end of the game feels earned.

There are three segments in the game where you play as a character other than Red, two of which are simply vehicle-based missions that have you driving a tank and piloting a fighter plane respectively. The third and most unique of these instances is an undercover sabotage mission with you in the role of a French Resistance officer. While all three presented a pleasant change of pace, the sabotage mission was by far the most fun, and frankly went by too quickly. It would have been nice to see a few more levels with this character as her story seemed a little more involved than the segment allowed for. Some of my favorite game mechanics in the Call of Duty games tend to fall into these one-off campaign missions, and Call of Duty WWII is no different.

Mind you, the core gameplay of the campaign is rock-solid, and while the difficulty level can fluctuate a bit, the missions offer a nice amount of variety. I found the campaign to be more difficult on the normal setting than it has been in previous games. You’re not going to get very far if you just keep rushing out with guns blazing, mostly because auto regeneration of health doesn’t exist in campaign mode this year. Instead, you have to heal yourself with medical kits, and while they are readily available throughout each level (and one of your squadmates can toss one to you every once in awhile), you’ll have to take things a little more cautiously and deliberately. This just makes sense given the context, and making healing a more explicit action is something I would have liked to have seen extended to the other play modes on the disk.

Returning to the roots of the series and grounding the experience in the classic gear and weaponry of the World War II era may be the best thing to happen to Call of Duty multiplayer in years. There’s a level of focus and energy present that has been missing from the game for some time, and it’s actually surprising how fresh and different it feels considering how overdone WWII shooters were nearly ten years ago. For the most part, multiplayer merges the classic gameplay of the early WWII games in the series with a few of the innovations that have come up in the years since (such as scorestreaks). One of the most interesting additions is the new pre-game lobby area dubbed “Headquarters”, an area that presents the aspect of the multiplayer experience in a way that fits the context of the era. Essentially an encampment built on the bunker structure and surrounding area of Omaha Beach, you can find everything from a commanding officer who can provide you with your choice of side missions that can yield money, loot boxes, or both, a shooting range to test out newly unlocked weapons, and even a scorestreak training ground, a feature I’ve longed for for years. There is even an area reserved for when you are ready to upgrade to prestige, where you get to meet General Davis himself. HQ isn’t necessary – anything you can walk to in the Headquarters can also be accessed more immediately by a touch of a button in the menu system, it’s just not as fun.

Player customization and building loadouts are handled a little differently this year in the form of Divisions, which are basically specialized classes that yield special abilities and upgrade paths. Divisions are super flexible- you can still pick whichever weapons and perks you want, but choosing a division nudges you in a specific direction, which can yield bonuses if you stick to that division’s specialty. There’s nothing wrong with a sharpshooter from the Mountain Division choosing a bazooka as a second weapon, but sticking to the sniper rifle will provide more advantage and progression bonuses. The approach takes some of the guesswork out, and feels easier to navigate while still allowing for nuanced customization. Additionally, you can nab a few of the progression bonuses early via loot boxes or purchase them directly from the Quartermaster  in HQ (via the in-game currency) , but most of what you get is either cosmetic in nature or a weapon component that you’d be able to unlock eventually anyway. Additional optional challenges and orders you get from both the Quartermaster and Major Howard in the bunker at HQ will net you more game cash to spend, and you can even pick up a stipend.

By far, my favorite addition to multiplayer is the narrative-driven, objective-based War mode. With three assault and defend missions that are inspired or loosely based on real-life stratagems, War is the ultimate expression of team-based multiplayer and leverages the setting as effectively as the campaign does. Gameplay shifts as each side completes an objective, and teamwork and strategy are rewarded more than number of kills. My one complaint is that we only get three of these, but I imagine we’ll get some more as DLC starts rolling out.

This year also sees the return of Nazi Zombies, though this version is significantly more terrifying and complex than the Zombie game that kicked off the tradition in the Call of Duty series back in World at War. This time our four protagonists are members of an elite team that’s been assembled to retrieve stolen art from the Axis powers. This mission has led them to a small Bavarian town where an evil Nazi scientist has unleashed a lovecraftian curse on the area, causing hordes of undead Nazis to attack. The main characters are interchangeable, and the set-up story is somewhat flimsy, though it does tie into a larger metagame that reveals itself as you open up the environment.

The core zombies gameplay is here, but this time, instead of boarding up windows and repairing barricades, you’re given a persistent melee’ weapon (shovel), and much wider open spaces than in previous installments. Additionally, there are consumables such as unlimited ammo and one-hit kills that you can equip before each session, and each character gets one free self-revive action. Every section of the map offers something interesting, and there are a handful of environmental traps that can be set off to spectacular effect against your undead foes. It was nice to see a harder horror take on Zombies once again.

The assessment of this game was done both at an event hosted by Activision and with product provided afterwards.

With a campaign that brings some of the most historical battles of the European Theater to life like never before, multiplayer that combines the best of the old and the new, and one of the most visceral Zombies games the series has had, Call of Duty WWII is a triumphant return to its roots, reminding us why those early games were so good in the first place.

Mike Dunn is the old man of Gaming Trend, having cut his teeth on Atari consoles and First Edition Advanced Dungeons & Dragons back in the day. His involvement with Gaming Trend dates back to 2003, and he’s done everything from design and code to writing and managing. Now he has come full circle, with a rekindled passion for tabletop gaming and a recent debut as Dungeon Master (nearly forty years after he purchased the original DMG).
Related Articles: Call of Duty: WWII
Share
Tweet
Share
Submit