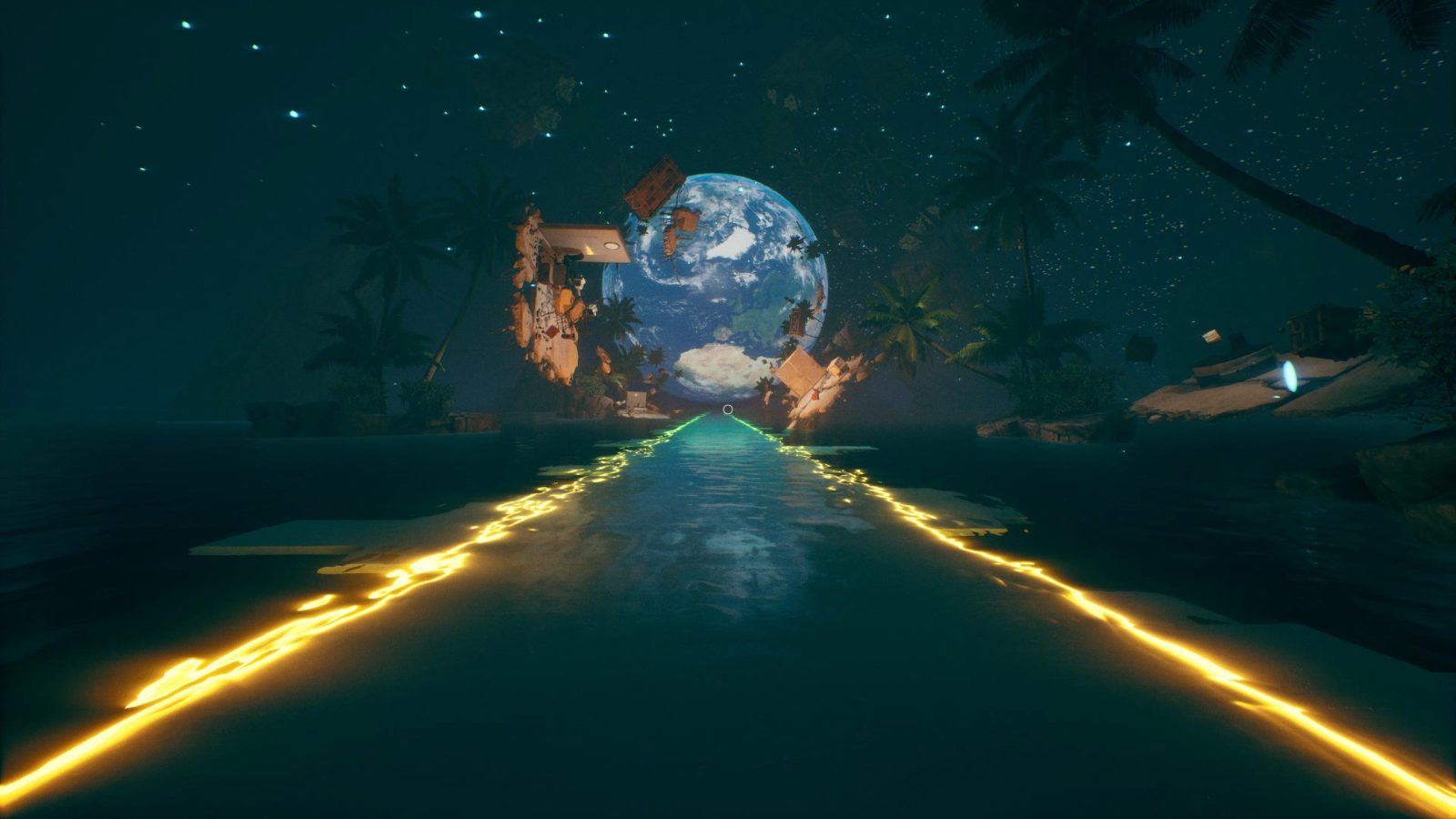 The Entropy Centre review — On the clock

The Earth has been destroyed countless times. Thankfully, the Entropy Centre on the moon has always been there to rewind the planet using Entropy Energy – until now. As the last surviving member of the Centre, only you and your trusty time-gun Astra can avert the cataclysm by solving enough puzzles to generate energy.

Everyone has one of THOSE games, the ones that change how you see the world a bit after you play them. Like seeing Tetrominos everywhere or places you can portal to. The Entropy Centre, a puzzle game about rewinding objects through time, is one of those games. For days after playing it, I would think “just rewind the TV to turn it off” or something along those lines. Obviously that’s impossible – I am, in fact, able to discern reality from fiction – but it’s always such an interesting side effect of games that get you thinking.

In The Entropy Centre you play as Aria, an amnesiac waking up on the dilapidated station with no idea how she got there. As you explore, you meet Astra, your new best friend. She’s an AI aboard a Puzzle Exercise Assistant, or PEA for short. Your PEA can rewind certain objects through time to solve the centre’s puzzles and generate Entropy Energy. Early on in the game, the Earth is destroyed so you need to rewind it a tad so they can correct course. The station’s reactor also needs repairing, so you and Astra explore the centre along the way.

In each puzzle area, you’ll use various types of boxes to cross gaps, hit switches, and more. The game starts off simple with normal boxes, but you’ll eventually come across laser boxes, bridge boxes, bounce boxes, and collapsable boxes. While sometimes you simply need to reach the goal, most often you need to also hold down switches to open the goal door. This means you have to solve puzzles backwards, placing a box on the door switch first thing so you can then rewind the box back to that position later. Any object’s movement is essentially recorded up to a point, and when you want to rewind it you simply point and shoot with R2, holding the button to move it backwards through time. 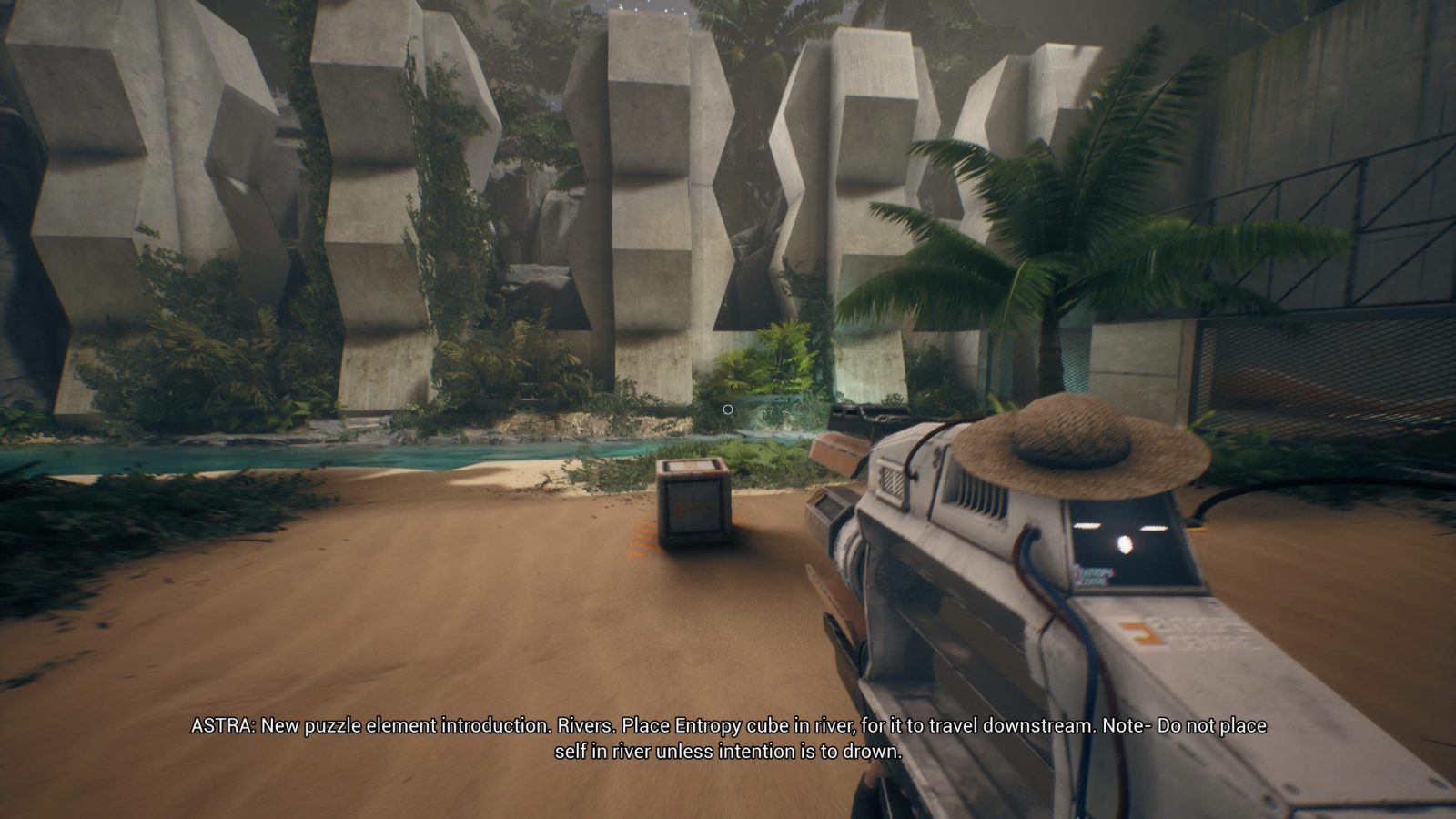 For example, an early puzzle may want you to reach a high platform, but the door up there is controlled by a far away switch on the ground. So, you can place a bounce box on the distant switch, then move it to the ledge, bounce off of it onto the platform, then rewind the box to activate the switch and move through the door. If this sounds complicated, it’s a lot more intuitive to play through in game than it is to explain on paper, but it will still tax your thinking muscles in a fun way.

It may be easy enough to figure out what you need to do in a puzzle area, but the fun and difficulty comes from discovering how you do that. The game is constantly introducing new elements and wrinkles in puzzles all the way to the final room. I’ve already mentioned the various boxes, but you really need to think outside the box (pun intended) for a lot of these rooms. A highlight for me was a few instances where I needed to drop a box from a high place, then later rewind the box through the drop to catch it on its way up… down? Whatever. The point is there’s always something new and interesting to discover around every corner. 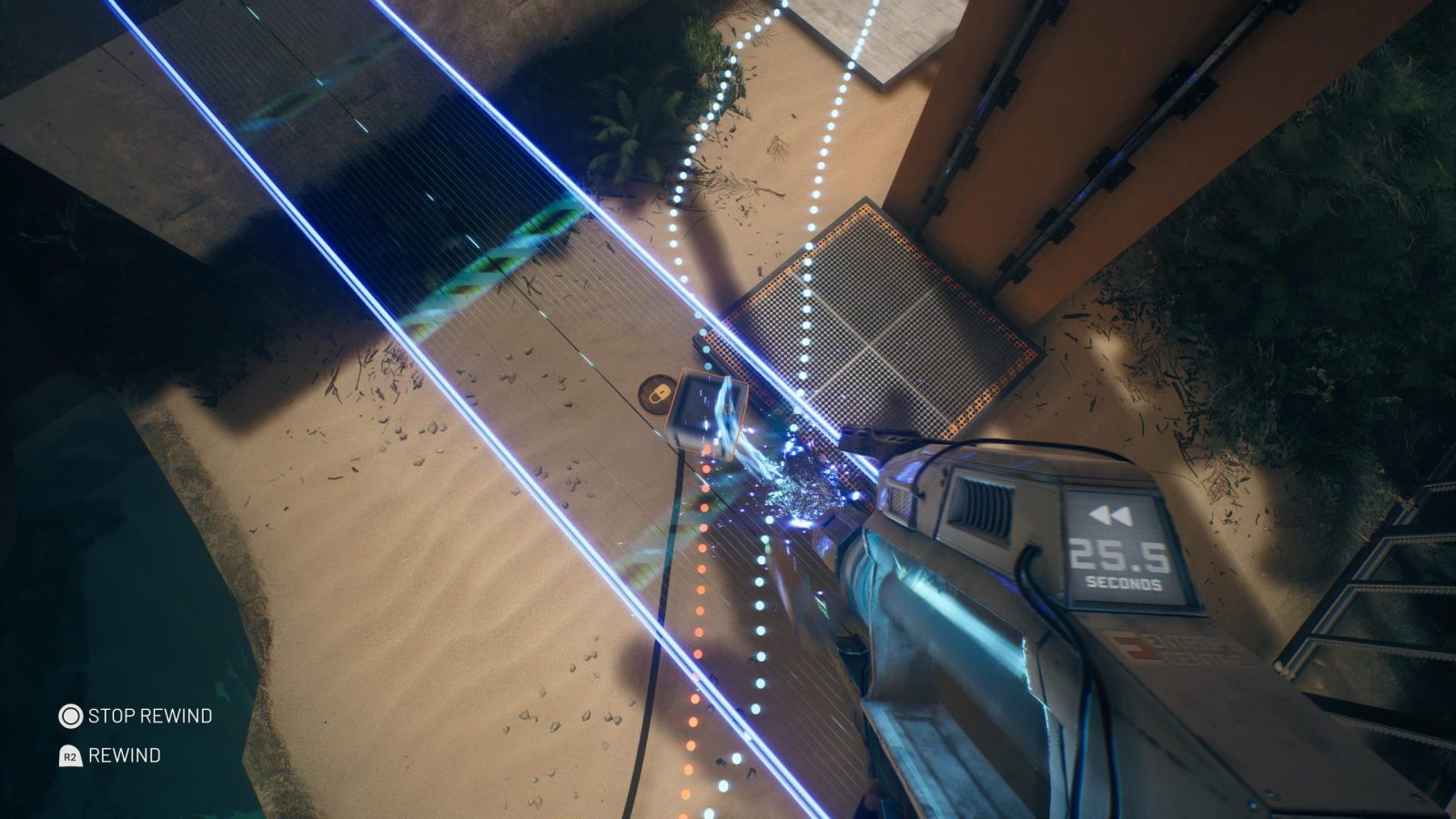 Aside from the sheer fun of solving these puzzles, what will keep you going is actually the story, characters, and humor. Saving the Earth is a familiar premise, but it’s done in such a way that it still feels urgent – plus you still need to figure out why you’re the only one here and why the station looks like it hasn’t seen use in decades. I wasn’t expecting to be laughing throughout the adventure when I first started playing, but The Entropy Centre is absolutely hilarious. In particular, Astra steals the show here with her adorable emoji face, relentless positivity, and adherence to protocol. At one point, Aria reads about a cat that disappeared after getting caught in the reactor then, hours later, Astra just spouts off a random cat fact because she automatically subscribed you to the centre’s cat fact newsletter. When asked if she wants to unsubscribe, Aria replies “…keep me subscribed…”. Their banter is consistently a riot and super weird yet endearing. I did find Aria’s voice over to occasionally sound awkward, especially in action scenes or with efforts, but these two are just a delight.

The Entropy Centre is a puzzle focused game, but occasionally you’ll be thrust into an action scene to spice things up. You’ll need to evade and destroy the rogue robots who populate the centre, because they’re suddenly out to kill you. You die in about two hits from projectiles or just one if they can catch up to you, but you’re not entirely defenseless. You can rewind projectiles to destroy whoever fired them and you’ll occasionally come across bomb boxes to blow them up from a distance. You’re not just running and killing, however, you still need to solve a few puzzles under duress. Thankfully, these are much simpler than the normal puzzles, but they’ll still test you on the fly thinking along with your reflexes. 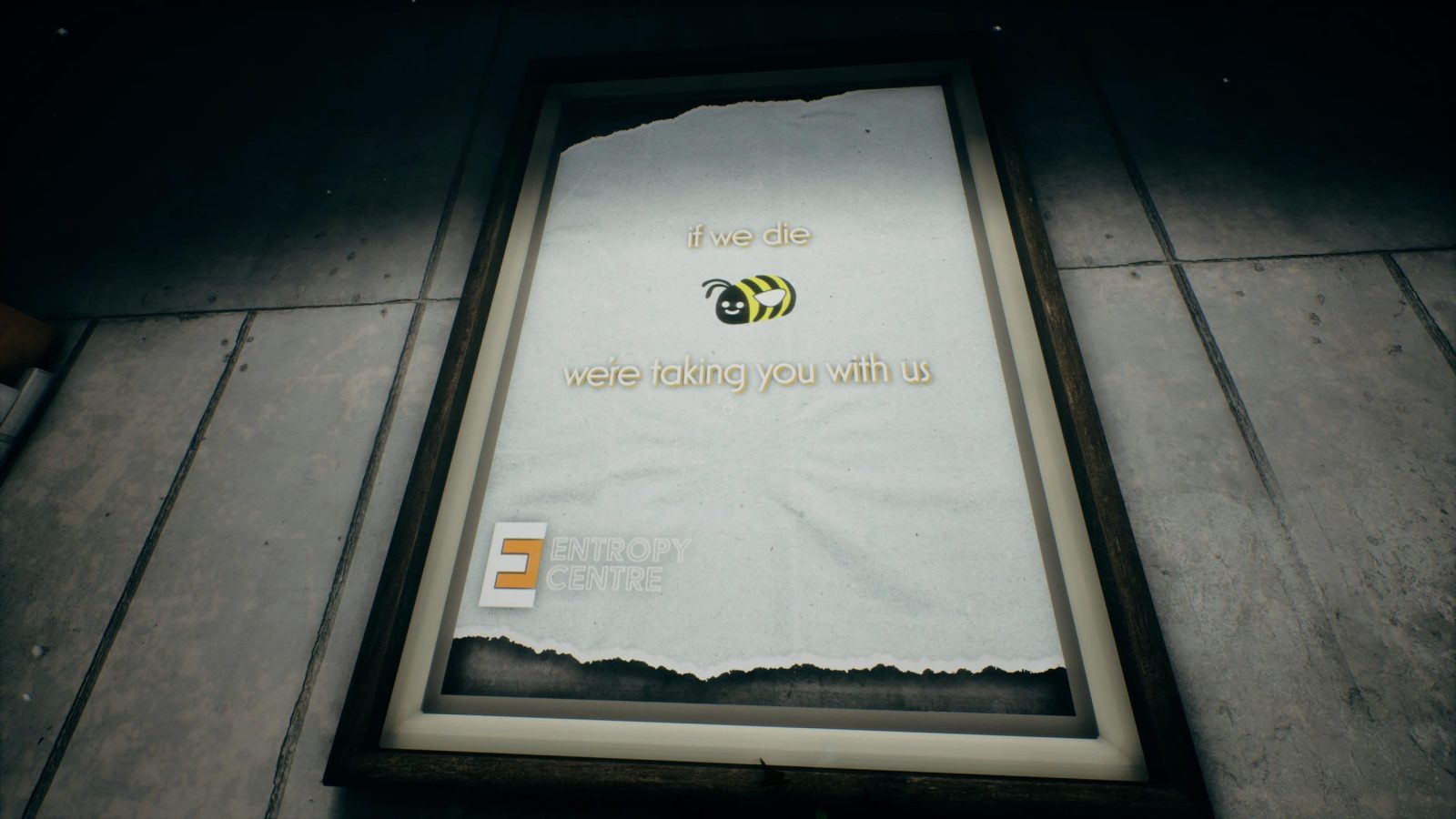 Unfortunately, the action scenes are the weakest part of the game, with one or two instances requiring you to basically already know what to do. Astra does help a few times, but in particular I remember moments where I needed to rewind a destroyed bridge or column to cross a gap but by the time I realized I could actually do that I was about to be killed. It’s not too big a deal thanks to fairly generous checkpointing, but a frustration nonetheless. As someone really interested in the lore as well, I somehow only ended up with about half of the backstory notes despite checking every computer I came across. I’m not sure if there are secret areas or something I missed, but some sort of checklist for each act would have been appreciated.

Regardless, The Entropy Centre is a very pretty and incredibly fun game. Playing on PS5 I did come across a few graphical hiccups, but this looks pretty damn good for an indie game. In particular the lighting and reflection work is top notch. I thought the game might be using ray tracing but I can’t find any evidence to the fact online, so great job here! The humor alone would make this game worthwhile, but combined with the inventive puzzles, great visuals, and interesting story this is a must play for puzzle fans.

The Entropy Centre review — On the clock

The Entropy Centre is a mind bending puzzle game that’s constantly introducing new ideas to feel fresh. Rewinding objects never gets old, and will change how you think for hours after you put the controller down. Add on top some hilarious writing, charming characters, and an intriguing mystery and you’ve got an instant classic.

David is the kind of person to wear his heart on his sleeve. He can find positives in anything, like this is a person who loved Star Fox Zero to death. You’ll see him playing all kinds of games: AAAs, Indies, game jam games, games of all genres, and writing about them! Here. On this website. When not writing or playing games, you can find David making music, games, or enjoying a good book. David’s favorite games include NieR: Automata, Mother 3, and Gravity Rush.
Related Articles: Indies, The Entropy Centre
Share
Tweet
Share
Submit