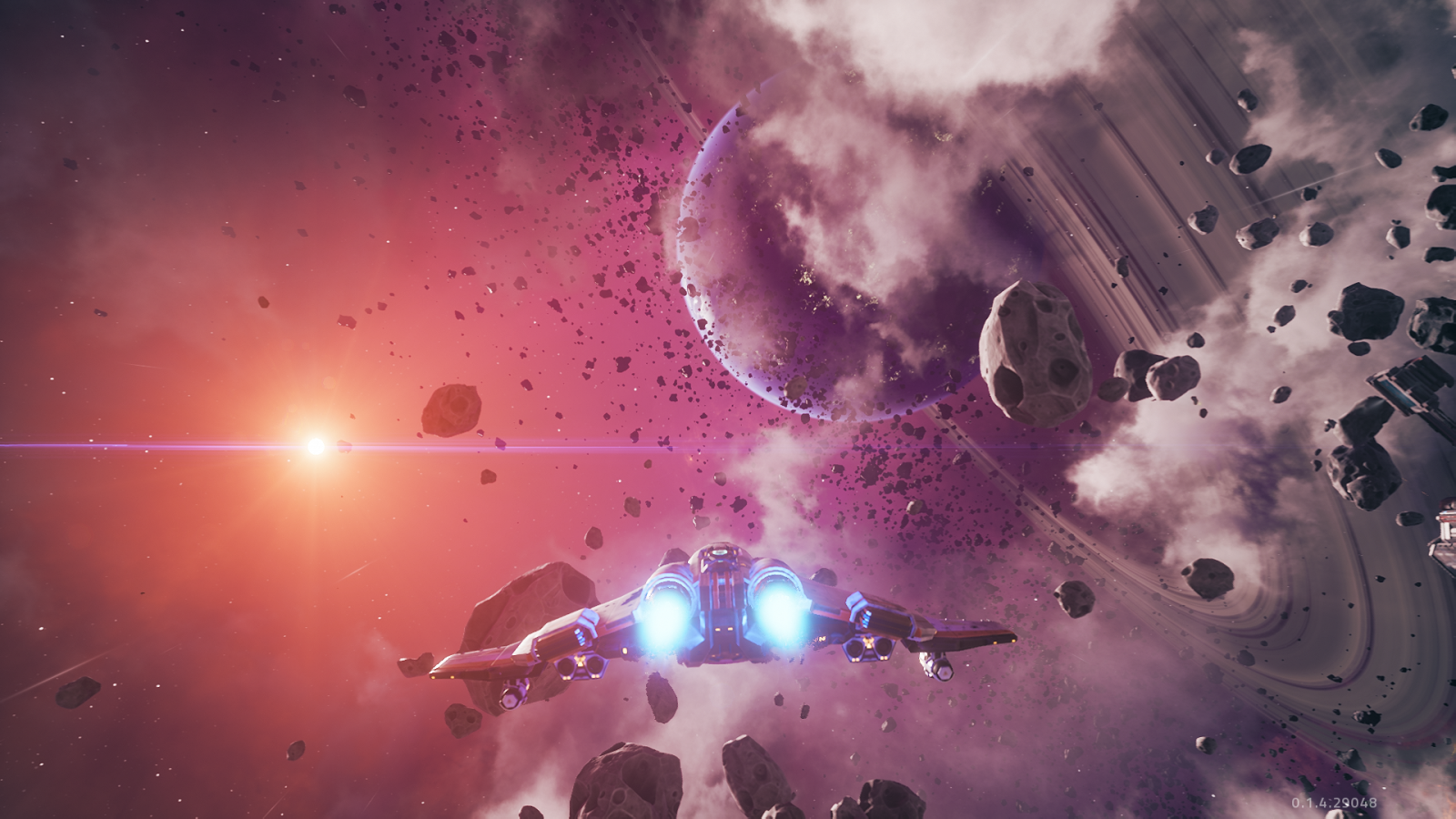 Roguelike is a term bandied about a lot in recent years. For a while, it seemed like every game took some inspiration from the genre, which left behind a great deal of bland copycats. The genre’s regular trappings, procedurally generated areas and run-based gameplay loops, offer a different and interesting way to explore a game’s mechanics. For me, it was in the lack of any character progression in between runs that would always halt all momentum and fun I might have had. Like Rogue Legacy before it, Everspace allows each run (while randomized and unique) to be a stepping stone; persistent character upgrades afford the mechanics room to grow and mature while also giving meaningful and satisfying additions along the way. The controls are also good enough on their own to be worth repeatedly starting your game from scratch.

Persistent character progression isn’t revolutionary by itself, however. What sets Everspace apart is in the fluidity of its controls and the effortlessness by which it executes on all of its disparate parts. You begin adrift in space, unaware of your history or your objective outside of your onboard computer pointing you towards a vague goal. You choose each unique area on a diverging star map. As your character develops, you can earn the ability to detect environmental hazards from the map or you can see how deadly an area will be so that you can plot your course through space how you see fit. Once in there, you’ll start mining, salvaging, and fighting to help make it to the next point on the map.

To exit an area, you just need to point your ship in the direction of a warp point that is always displayed on your HUD (unless that area has jammed your signal) and the only thing keeping you from constantly jumping to the next area is the fuel it takes to do so. This means that when you’re plotting your course, you might want to stop in the more challenging area to get some of that precious fuel the enemies will drop. But if you’re running low on health and resources, you might need to play it a little safer and try to find a trader. The game nimbly strikes a fine balance between the heavy action of the dogfights and the slower, more deliberate exploration and resource gathering.

Most of your time in Everspace will be spent navigating tight spaces in through debris or enormous asteroids on the lookout for different valuable resources that can be used to craft weapons and upgrades. The ships handle so smoothly that it never feels like a chore. You have full control of your ship in a 3D space and it’s impressive how handily Everspace manages that movement. You never feel out of control, and even when you lose all sense of place in a particularly harried dogfight, your ship always gently rotates back to its original position. The game does an excellent job of keeping your bearings in the middle of the vast expanse of space.

Just poking around in space is worthwhile because Everspace is artistically stunning. You are always in a more-or-less similar looking outer space environment, but the developer, Rockfish’s, different backgrounds seem almost infinitely varied and always striking. You could be flying by a planet’s rings or in a sea of asteroids that fill the screen with bright alien rocks that stand out against the dark emptiness beyond it. Each is impressively well-realized, and I often found myself stopping just to take it in for a moment.

For as big and empty as it can be, you are not alone in Everspace. There are the enemy Okkar forces to deal with in each area and if you stick around too long, they’ll start to appear in force to incentivise you not to dawdle. There are also the G&B forces that are friendly and will fight enemies with you until you decide you’d be better off with that fuel they’re carrying and you take it for yourself.

When you do inevitably get into open conflict, the combat is fairly straightforward; you have a shield and regular hull damage with weapons that are effective against one or the other, so you’ll regularly be switching between different weapons to take down your target. Getting some outlaw in your sights and chasing them down in a drag out fight was always extremely satisfying which was only amplified by the game’s exaggerated and bombastic ship explosions. It made each encounter–even small ones–feel dangerous and exhilarating.

You will start out with preset loadouts that are based on which of the three classes of ship you’re using (fragile and quick, slow and strong, and one somewhere in between), but during the run you can choose to build different weapons or consumables if you’ve found their respective blueprints. You can also upgrade them to fit whatever need you might have for that weapon. You might want a weapon to be more effective against enemy shields or to tear through the ships hull. It is a robust amount of options that is crucial without it feeling limiting when those upgrades are gone at the start of your next run. Considering you’ll be dying and restarting many times, it was nice that I always found more options to spice things up.

As you move further and further into space, your character will slowly start to rebuild his story and what he’s after. The story was certainly not the highlight of my experience, but it was surprisingly effective at exploring some interesting topics while also serving as adequate justification for the repetitive nature of the game. It is told through sporadic and lightly animated storyboards that are exactly as light as is appropriate for the game. Where the real interesting characterization lies, though, is in the offhanded and jovial rapport between the main character and his cheeky ship’s computer. They have a fun banter that sets the tone for the whole game fairly well without being annoying.

Even after I reached the conclusion of the story and saw credits roll, the game was brimming with secrets to find and perks to unlock. I couldn’t wait to jump back into space and see what I could find. Everspace deftly managed to combine the resource gathering and crafting of a survival game, the high stakes nature of roguelikes (including an optional hardcore mode that dauntingly offers permadeath), and fast-paced, visceral space combat. I was regularly impressed by just how much depth the game offered and how capable it was at delivering fresh and fun experiences every time.

Everspace struts capably into a crowded field and proves itself as a vital experience worth revisiting again and again. This is the first game from the team at Rockfish, and they’ve certainly set the bar high for themselves.

Nathan lives in Colorado catching Pokemon on the Go and at home. He previously spent three months interning for Game Informer before coming back to Gaming Trend to spread the good word on video games. His real passion, though, is collecting different versions of the 3DS and other weird Nintendo garbage. It's a never-ending quest for less space in his house.
Related Articles: EVERSPACE
Share
Tweet
Share
Submit