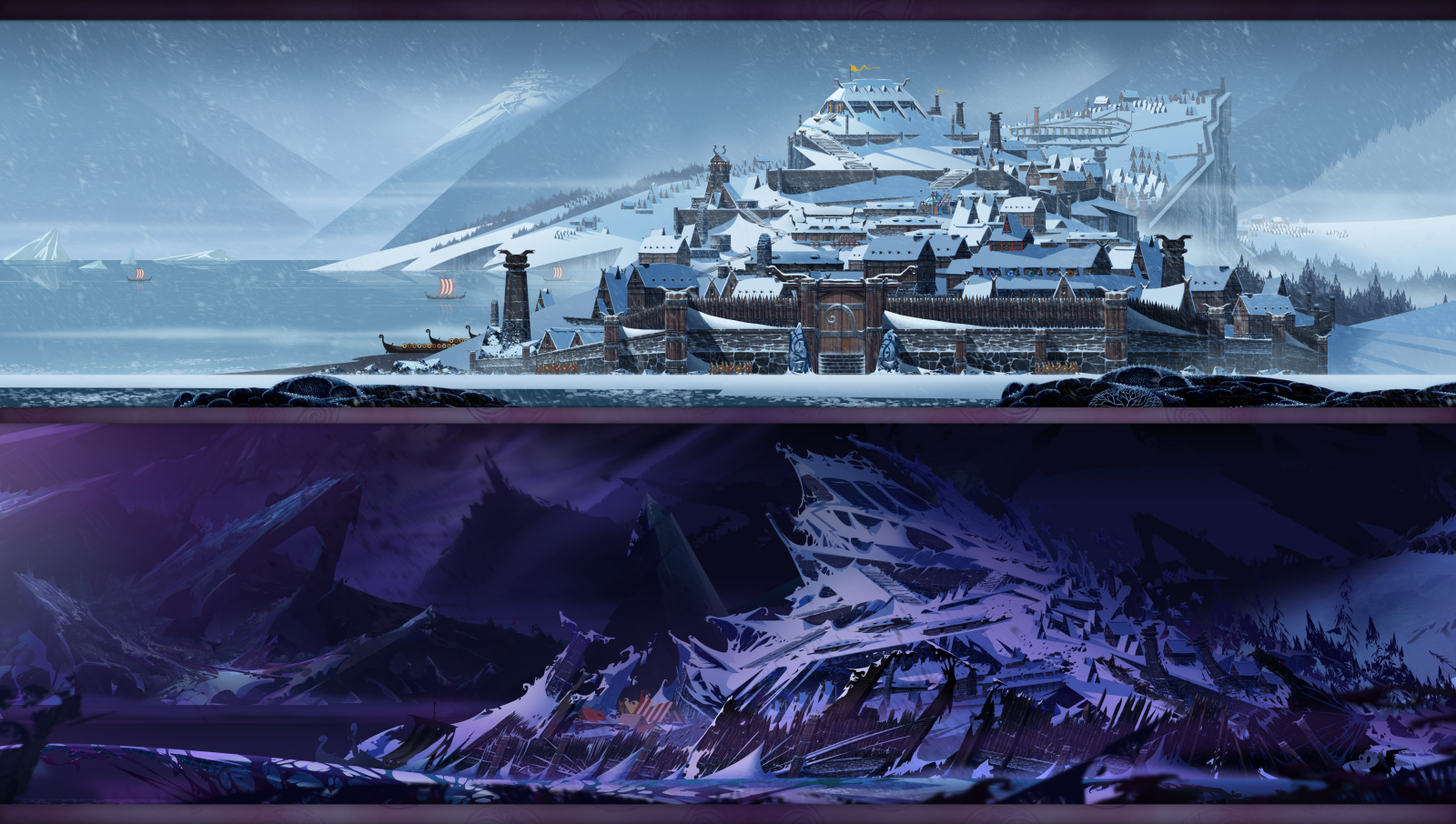 It was a long road to get here. A road lined with danger, twists, and turns, but The Banner Saga 3 reached its end. It doesn’t reshape the entire series, but it builds on the framework of the first two games to deliver a rich and compelling Norse-themed narrative with interesting characters fraught with perilous and nail-biting player choice. The Banner Saga 3 continues to carry the flag and rounds out the trilogy on a bittersweet note, hitting all the same highs as previous entries, but is mired by just enough minor annoyances to hold back an otherwise exemplary game.

The third and final entry in the trilogy sees Alette or Rook (depending on choices made in earlier games) finally reaching their destination. How they get there and under what circumstances are totally up to you though. The main thrust of the game is to repel the oncoming horde of Dredge, the ancient enemies that have been biting at your heels for the entire series, and forge as many alliances you can in the final days. The largest hurdle in your way, though, are not the enemies outside the wall but the dangerous politicking within them. The game does a great job of casting your foes in a more sympathetic light throughout the game, and much of the conflict arises from political strife between people for or against aiding the Dredge.

The conflict is played out in two distinct ways: the primary means for direct conflict comes from tense turn-based strategy battles. You’ll set up your team from a large roster of possible combatants (each with their own strengths, weaknesses, and unique abilities) and take turns moving on a grid. The developers masterfully layer mechanics on top of that standard strategy game formula to offer something akin to a deep tabletop experience. The Banner Saga, though, manages to make all the pieces fall into place in a satisfying enough way that it never smacks as impenetrable.

Those battles are always thrilling and often feel like you are getting through by the skin of your teeth. The glue that holds everything together, though, is the second way Stoic games plays out the conflict: the narrative. In between every battle, you’ll see your caravan marching ever forward towards your goal which is then intercut with brief bits of conversation or commentary, and then gives way to decision making. This is where the player choice comes into play. If you’ve played previous entries in the series, you’ll know that the choices you makes here can seem trivial but tend to always have direct and important influence on events that will play out. You might have to choose who among your caravan to send to diplomatically appeal to people which will, in turn, affect the overall strength of your caravan. You may have to choose to stop and help hungry townspeople at the expense of useful supplies, or you may make the wrong dialogue choice and cost one of your party members their life.

This is the ultimate success of The Banner Saga 3 is that your choices in dialogue almost never feel like clear-cut “good” or “bad” options. It made me really consider each person’s unique personality and how they might respond to the different options available. Making an emotional appeal might not be as useful when you’re talking to a gruff Varl, the game’s giant character race, who respects silence. It gave all the dialogue the same tactical tension present in the turn-based encounters where every decision you make is important.

Those decisions have far-reaching consequences as well. When you have to make decisions, you aren’t simply deciding if a character you like won’t be in the story any more, but instead whether that character you’ve been using in combat won’t be available. By letting decisions heavily influence your battle party, it makes for much more difficult tactical decisions. Do I want to let this character split from the party, which might be the right thing to do, at the expense of losing them from my active battle party? It is a lot more interesting than simply coasting through the game role playing the good or bad guy, when the decisions then also directly impact you as the player.

As an added bonus, if you are bringing over a save from the first two games (and I highly recommend that you play those games first) the game carries over your decisions. Not only will the decisions be brought over, but the game is such a direct continuation that your characters’ levels and stats will carry over from game to game. If you do jump in for the third game it isn’t impossible to pick up much of the context (and there is a recap that helps a little), but you’ll be truly short changing yourself from experiencing a complete story.

The turn-based combat can be challenging, but the game is surprisingly forgiving—or unforgiving depending on how you look at it—when it comes to losing in battle. I lost several fights in the game, but the game doesn’t give you a game over screen. Rather all the characters you had in battle at the time will be injured and thus less useful in future fight until your caravan comes to a stop and you can rest, expending valuable supplies to get them back into fighting shape. It means that a character can go down in a battle and not be out for good, but it still leads to harrowing situations where I would lose a battle and all of my best fighters were weakened for several fights in a row. I appreciated how it kept the game moving along, and also worked with the rest of the game’s focus on player actions being important for the story. If you lost that fight, then that is simply what happened there. You just need to regroup and do better next time.

For the third game, they introduced a new type of battle as well. The wave battles play out like any other fight, but you have a finite number of turns before the enemy sends in reinforcements. If you manage to defeat all the enemies before the turn limit is up, you’ll have the choice to swap out any injured fighters for fresh faces and take on another wave or cut your losses and flee. If you manage to make it to the end and take out the commander, you’ll earn a useful item you can equip later. Wave battles were a fun twist on the combat. They felt like I was pushing my luck every time I decided to stand and fight, but it was also some of the most rewarding moments in the game when I saw it through.

In the broad strokes, The Banner Saga 3 is a sharp and well-designed game with thoughtful characters and meaningful tactical combat—not to mention a stirring score from returning series composer, Austin Wintory. The game isn’t without its rough edges though. I played the game on Xbox One and while I didn’t encounter any bugs that could have tarnished my experience, navigating the busy and generally confusing UI was often a chore. The game seems tailor made for the PC. There are lots of arrows to click on and small UI elements that all seem like stopgap solutions for translating a mouse focused interface to the more static controller inputs. Some screens just map a cursor to the analog stick which thankfully aren’t critical or numerous.

Before a battle you’ll be clicking on your various party members and assigning upgrades or equipping useful items that grant bonuses in battle, and you’ll be swapping them into and out of active rotation for the fight. Even just in these screens I had a difficult time doing what seems like would have been simple drag and drop routine on PC, but was a headache on console. All of that is more or less manageable (even if the UI is too busy), but it’s in the battles themselves where the control scheme starts to take a real turn for the worse. You control your units on a grid from a top-down isometric view and you’re not just moving around enemies on the field but also traps and hazards on the ground. When the bodies start piling up and the screen is full of the hazardous purple remains of the Dredge that you’ve killed it can be difficult to wrestle with the controls. It was often quite hard to tell if my character was going to be moving directly through a trap on the ground or around it because there would be enemies between them and the camera, which you can’t rotate at all. It’s a shame because the fights are otherwise thrilling, but can become eye exercises rather than pure strategy.

The game’s shortcomings never made it feel completely unfair, but it is a big enough drag on the experience to keep it from reaching the heights of the genre. It is a compelling story with fascinating and well-written characters that I would recommend even with some minor annoyances in form along the way.

Despite some gripes about the translation from PC to console, The Banner Saga 3 does an admirable job wrapping up a grim tale of separation and loss. And it does that with challenging and fun tactical battles as well as fascinating player choice throughout.

Nathan lives in Colorado catching Pokemon on the Go and at home. He previously spent three months interning for Game Informer before coming back to Gaming Trend to spread the good word on video games. His real passion, though, is collecting different versions of the 3DS and other weird Nintendo garbage. It's a never-ending quest for less space in his house.
Related Articles: The Banner Saga 3
Share
Tweet
Share
Submit