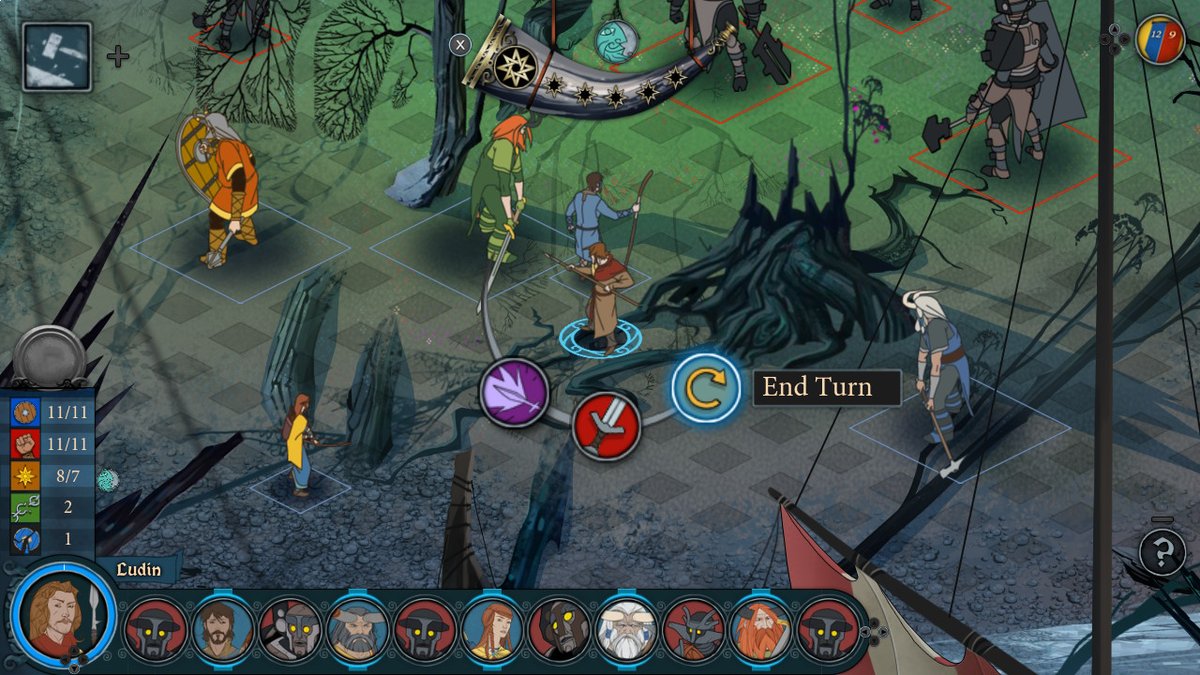 Going into The Banner Saga 2, my expectations were all wrong. I saw the game’s Fire Emblem-like strategy-RPG gameplay, and figured that would be the lion’s share of my enjoyment with the title. However, I found the real standout aspects of Banner Saga 2 to be everything surrounding the combat system, which is rather atypical for me. I’m a gameplay-first type of guy, but not with Banner Saga 2. With this game, I was drawn to its excellent atmosphere and gripping choice-based narrative.

From the moment I began my quest, I was blown away by Banner Saga 2’s visuals. The game has an amazing hand-drawn aesthetic that I find to be reminiscent of classic animation. But, the game puts its own twist on the style with a harsher, bleaker edge that complements the game’s inherently dark narrative. With that said, the artists also knew when to smartly use color to not only liven up a scene, but also to add an eerie aspect to the world. There are clearly gallons of care put into the game’s presentation, matched only by the care put into the game’s narrative.

Banner Saga 2 throws you in command of a caravan of survivors desperate to reach the safety of Arberrang with the Dredge closing in. If that sounds a bit complicated, that would be because Banner Saga 2 is a direct continuation of the first Banner Saga. However, the narrative here, much like a good comic book, feeds new players the key information needed to understand what is going on at the immediate moment. As a newcomer to the series myself, I actually didn’t feel all that lost. Of course, I didn’t understand all of the B-plots and the backstory of every character, but I got plenty out of the narrative as a first-timer. This is entirely because of the excellent writing in Banner Saga 2. The writers give you a lot to digest, but the sheer amount of characterization and worldbuilding on display is impressive and endlessly interesting. I got sucked into the narrative big time, not only because the writers are very good at their craft, but because of the game’s choice-based structure.

As you progress towards the city of Arberrang, often you’ll have to stop and make decisions based on what is going on around the caravan. Perhaps there is a barricade in the road ahead. Do you take the time to clear the path, or do you circumnavigate to stay moving, at the risk of the unknown? Perhaps there is a group of stragglers next to the road, asking for help. Do you take them in, or cast them away? Choices of this variety are plentiful, and truly personalize your narrative. Considering the magnitude of certain decisions and the way those outcomes influence later events, there is plenty of replay value from the narrative standpoint alone. In fact, I enjoyed this aspect of the game the most. Having to make gut-wrenching choices for the sake of the clan was engrossing in a way I don’t find even the Telltale games to be. The developers truly sold the narrative weight of the journey.

With that said, in certain situations, it didn’t feel like the outcomes were justified by the decisions. In one instance, I was faced with a problem, and I asked a member of my crew for his input. The result of this, seemingly passive action was that my character didn’t react fast enough to the problem at hand, which cost the lives of several caravan members. I had no way of knowing this would be the result. While this issue was not nearly prevalent enough to detract from the game on the whole, the few times this problem did crop up were certainly annoying.

Working in tandem with the narrative are statistics that must be micro-managed in order to keep the caravan trucking ahead. Population numbers, morale, and supplies all are factors in your adventure, and are always in flux based on the decisions you make. These systems showed the tangible effects of my governance, which forced me to really evaluate every aspect of a choice. For instance, when I’d cross paths with hungry stragglers on the side of the road, I’d have to weigh not only whether I’d like to incorporate them into my group, but both their effect on my food supply and my fighters’ ability to protect these people in a crisis. Introducing these systems lends more complexity to the decision making, which really benefitted the game as a whole.

Of course, the choice-based narrative is only one part of the equation, as the core combat in Banner Saga 2 is another likewise important aspect of the game. It’s quite reminiscent of the Fire Emblem series. Your team of survivors are placed on a grid-based battlefield and have to rout the enemy by taking turns trading blows. The battle moves back and forth with each team alternating between moving and attacking unit by unit. When I said at the beginning that I was more engaged by the interactive-storytelling than the gameplay in Banner Saga 2, my reasoning is twofold: Firstly, the narrative structure is just that good. Secondly, I just don’t find the gameplay all that compelling.

That isn’t to say the combat is bad, it just isn’t anything special. There is plenty of depth within the characters themselves, as they have a multitude of techniques at their disposal. Utilizing the characters’ abilities to cut down hordes of Dredge is rather rewarding, especially with the stellar animation that conveys the heft behind each blow delivered. But, in many instances, I simply found myself going through the motions because the battle structure doesn’t allow for much of a tactical mindset. This stems from two problems, the oscillating turn order, and the map design.

It is very hard to launch any sort of coordinated attack when all your units cannot move in tandem. If I could move everyone at once, I could better position my fighters, and more deliberately engage the opposition. However, I’m not sure how much altering this would even do for the combat without also redesigning the maps. Each battleground feels much more like a confined arena than anything else. There simply isn’t enough room to move around, to make choke points, to take cover, or really to do anything other than get right in the opponent’s face. That’s fine, but it just favors a particular playstyle that I found to be monotonous. Instead of cleverly moving around the map, Banner Saga 2’s combat revolves around head-on clashes.

The Switch version of Banner Saga 2 does have one significant advantage over other consoles when it comes to combat though: touch control. While the actual combat is just alright, without the Switch’s touch control, the UI and controls in combat can be downright frustrating. There is just too much happening on such a small map; trying to pick the right enemy and then cycling through submenus, alternating between the stick and the directional buttons to choose the right attack can just become a pain when there is a cluster of combatants sandwiched together. That is on top of the fact that the UI in any situation is just a bit too cluttered. However, with the ability to simply use the touch screen to select attacks and targets, the bulk of this problem is alleviated. Yet, that cannot mitigate the issues that arise from the camera.

Instead of a straight overhead view, the camera is closer to a three quarters perspective, which can obscure portions of the map. This makes it even more difficult to pick the right enemy to attack. However, the issue only arises when there is any sort of cover in the foreground that makes the tiles behind it hard to see and select. Considering how  most of the battle maps are fairly empty, it wasn’t an omni-present problem, but certain late-game encounters really exemplified this issue.

Banner Saga 2 is simply gorgeous, and its branching choice-based narrative approach is so compelling that I don’t even feel that the turn-based combat was needed. Actually, I think the game would’ve be stronger without it. While by no means bad, I did find the combat to be lacking a hard tactical edge and a cleaner UI. As it stands, the combat just felt like a diversion from the other elements of the game that were not only stronger, but exemplary. With that in mind, I do believe Banner Saga 2 is a great game that could’ve been even better if the combat system was given a harder look.

The Banner Saga 2 is a stunningly animated game that sets a new standard for both presentation and narrative outside of the AAA sphere. The game does stumble with a poorly designed combat UI, and a claustrophobic battle system that doesn’t offer much breathing room for different strategies. While monotonous, combat is serviceable, and doesn’t greatly detract from what is otherwise a defining narrative tale.

Abram is an aspiring games journalist with a soft-spot for titles published by a particular company that starts with N, and ends with -intendo. When he's not playing, or writing about, video games, Abram is most likely ranting to no one in particular about various films he's seen, or grabbing the sketchpad to do a bit of drawing.
Related Articles: The Banner Saga 2
Share
Tweet
Share
Submit