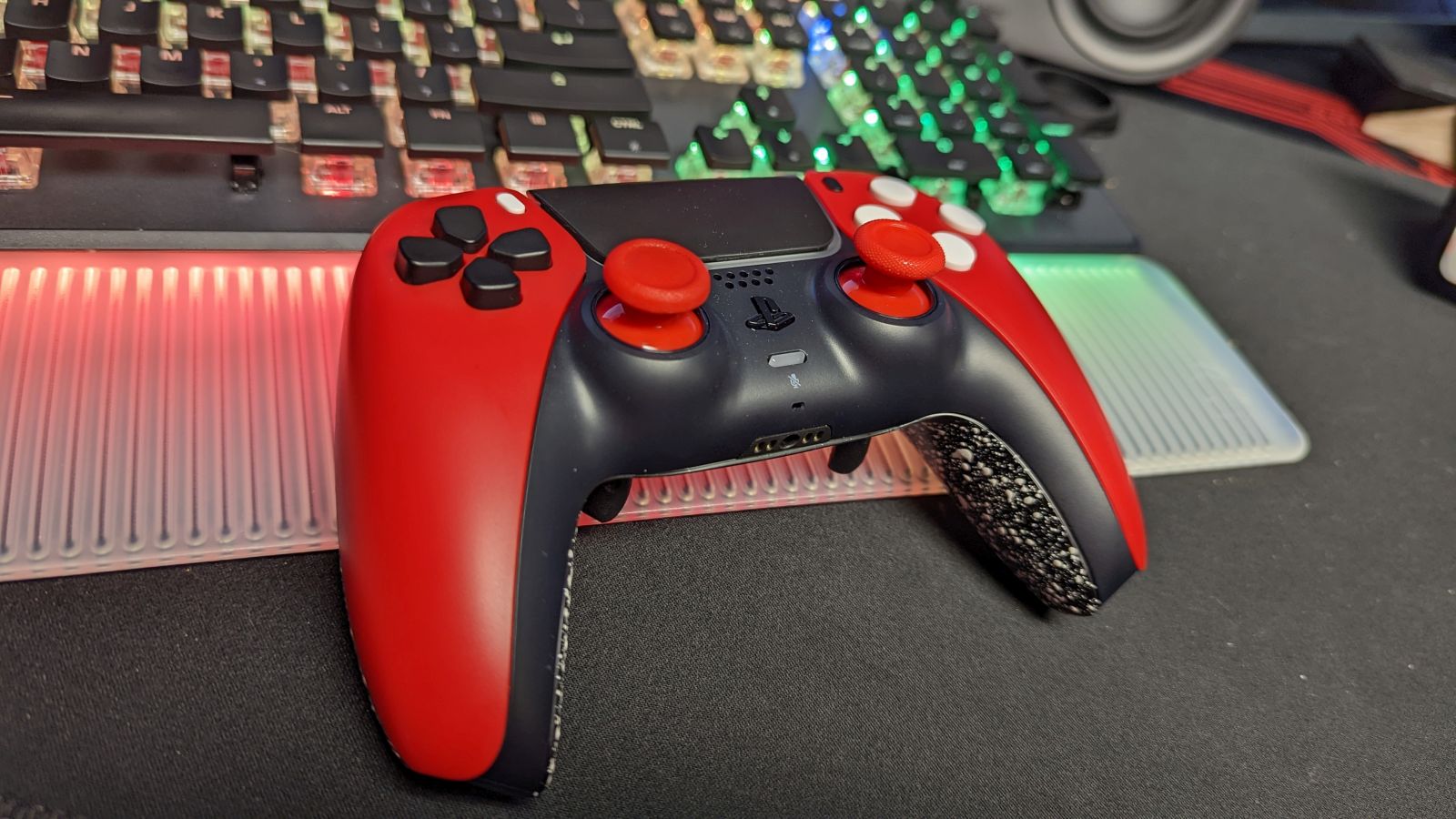 It’s not often an accessory hits and I don’t know about it, but that’s what happened when we heard from The Controller People. A group that’s been around since 2016, they’ve been making custom controllers for years and they’re always looking to innovate. We picked up one of their custom creations recently, and The Controller People might just be a name you need to have on your radar.

As you see in the name, this isn’t necessarily a completely new controller. That doesn’t mean you’re getting a Frankenstein’s monster of parts either, though. Like the Hex Controller (which we reviewed earlier this year), The Controller People build a better controller on top of the foundation of the excellent PS5 controller. This means you aren’t sacrificing as much familiarity, with the grip being largely the same.

The Controller People attack their design on multiple fronts: quick triggers, swappable thumbsticks, back buttons, you name it. Where they manage to be quite unique is with a very in-depth build-your-own-controller portal. It’s not just prettying up your controller with color either;almost the entire controller can be modified in some shape or form. Customizing the visual aspect is a key part of the experience (and there are a TON of options), but the additional modifications that lead to a more competitive design are the most important. I love what they’ve done, especially because it allows the customer to have a budget in mind and pick based on that. Each customization clearly points out the cost, along with a total at the bottom that updates as you add new things. There are pre-built controllers available as well, but custom is king.

Now, this review isn’t about a website, it’s about a controller. The controller I picked up is a nice minimalist red with white and black accents all over. That is the level of detail you can reach, and it’s the perfect controller for me. The grip underneath each handle is fantastic as well, with a splattered paint visual aesthetic that does double duty. The rubber is very comfortable to use and looks sweet, so it succeeds in both aspects. 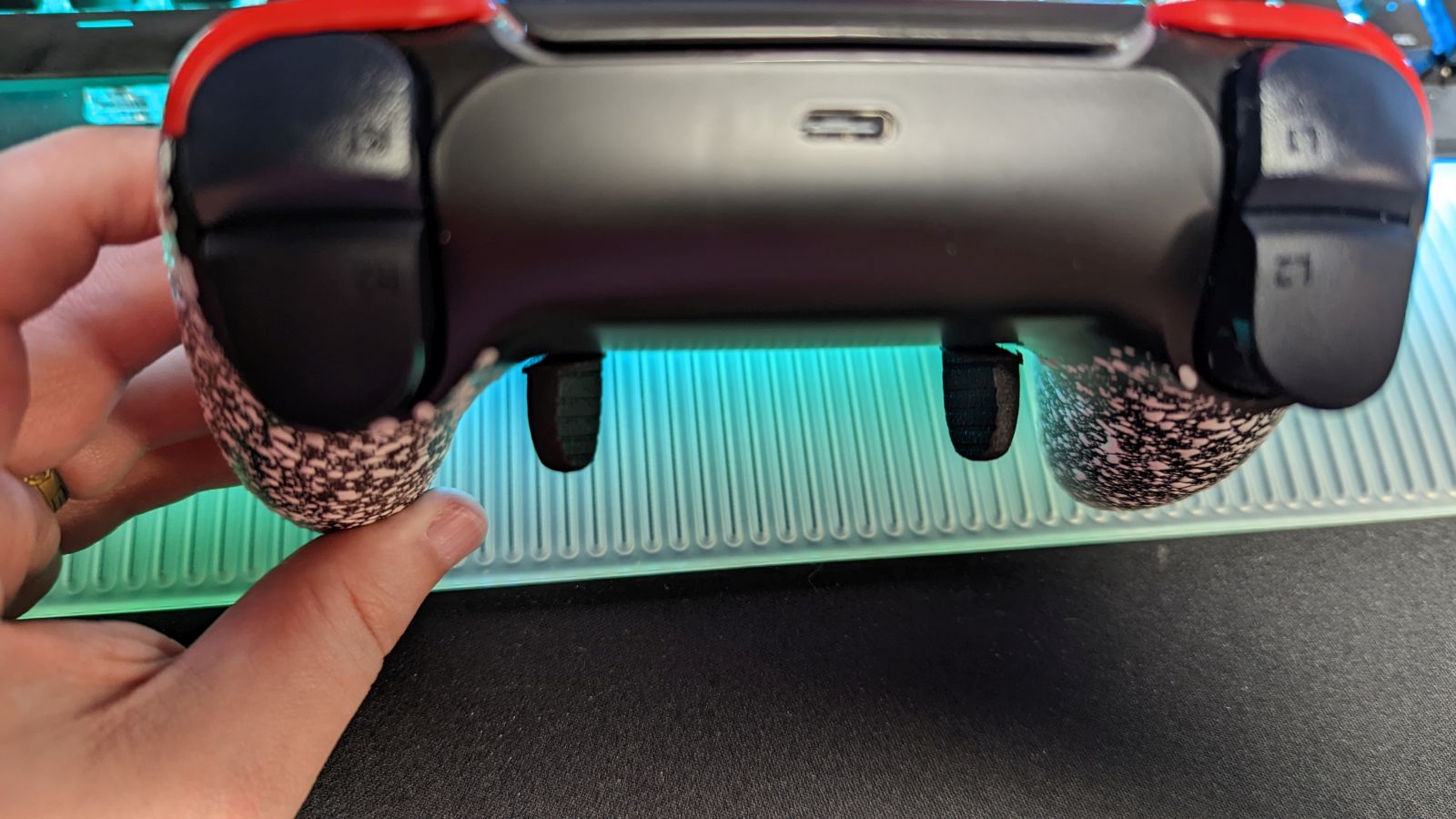 One thing that’s unique about The Controller People’s controller: its back buttons. These aren’t paddles or buttons, but studs (dubbed “ClickSticks”) that can be pulled like a trigger. The design choice works phenomenally; they’re grippy and hard to miss, along with being out of the way. If you struggle with accidentally pushing a back paddle or button in an intense moment like my dad, this is the perfect alternative. They’re equally accessible yet sequestered to their area. Even better is the performance. They have a nice click to them and they’re responsive. Remapping is also simple: just hold the stud and the button you want to map down for 15-20 seconds, and voilà.

Everything else on the controller is very straightforward, but the little extras are what makes this custom PS5 controller excellent. Gone in my build are the rumble motors/haptics, which would add weight and distraction to something built for competitive play, but it still feels balanced enough to note that they aren’t just pulling things out willy nilly. The thumbsticks (dubbed I.A.S., or Interchangeable Analogue System) seemed like they’d be similar to the Hex in that they’d be tall enough to throw me off. However, the multiple height options that came along with this build (three different heights) allowed me to work my way up the chain. The shortest ones are still taller than the standard PS5 thumbsticks, but not enough to impede my current feel for a new controller. They’re easy to switch as well, pulling the top piece off and clicking a new one into the stick base. While not as prevalent to some, the D-pad also has raised buttons, and I love how they feel. 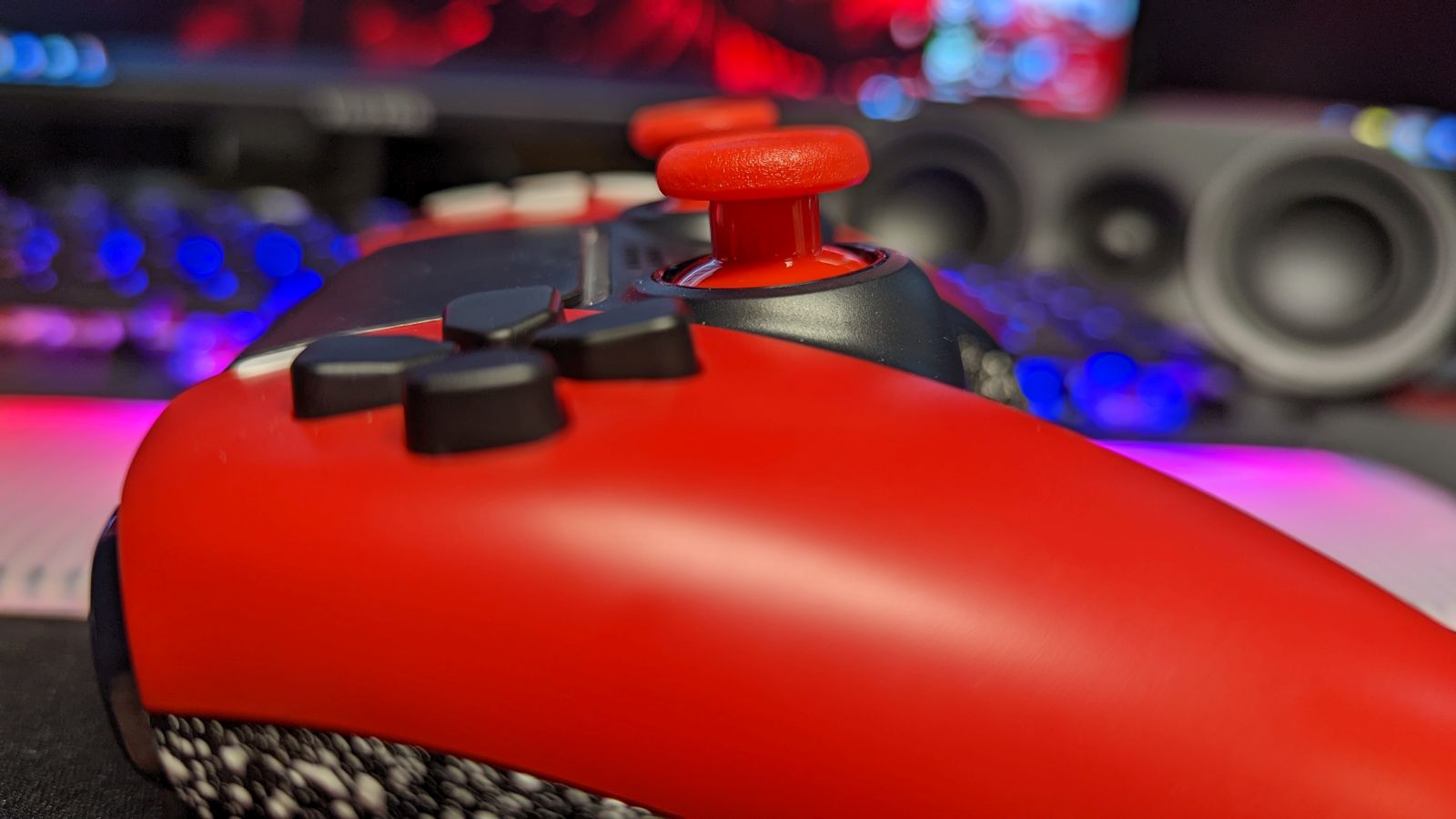 The triggers are an interesting piece to this one. In the different controllers I’ve used, you usually get them changed out for the quick triggers or a locking mechanism that controls the length of your pull. This one follows the former approach, with digital triggers put into place. I love quick triggers to the point that playing a random story game with one of my standard PS5 controllers actually throws me off a bit, and these have a nice clicky feel that reminds me of a mouse button. Quick response from your triggers is necessary in the FPS genre, and these offer that in a great way.

I did have a bit of an issue with the right trigger when we started the review process. It was somewhat of a freak problem (my R2 button would stop recognizing the press during sustained gunfire in game), not one that my rep had even heard of with their previous ones. While that issue was there, I have to call out the amazing customer service I received from The Controller People. They were personable, did their best to get to the bottom of the problem, and got me a replacement quickly once we realized there wasn’t anything we could do on my side (and the replacement works perfectly). That’s the mark of a company you want to do business with. Things occasionally don’t work as they should, but you can’t fix bad customer service. Alex and co are awesome and got me gaming again quickly, and I thank them for that. 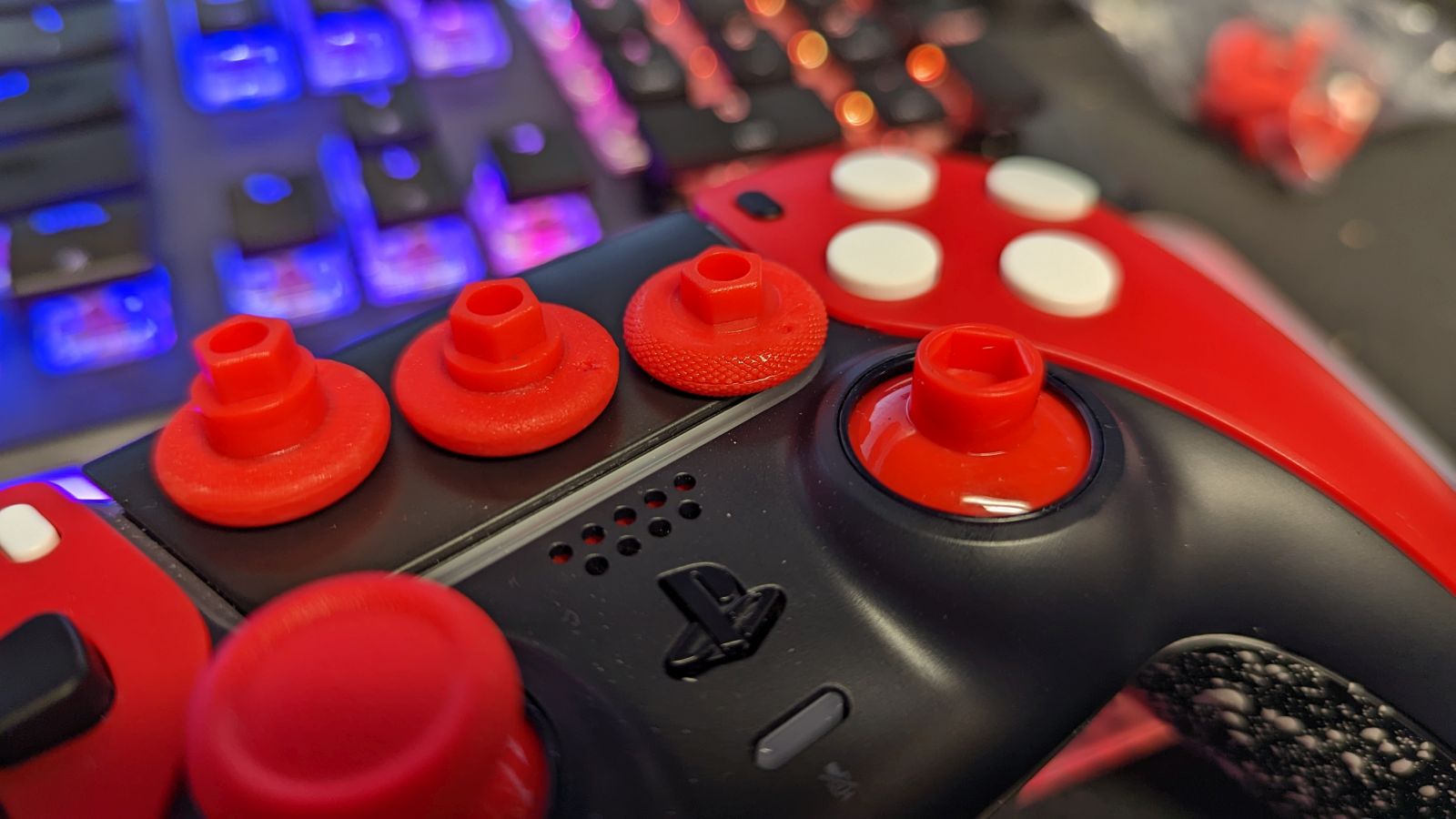 With all that said, I do hope The Controller People will work on their presentation. When I received my controller, it was in a standard PS5 box, with only a custom TCP sticker holding the box shut to let me know this was a custom build. No notes or guides were inside the box to walk me through my build, just the controller and extra thumbsticks. Being subtle is one thing, but posturing yourself as a premium product requires a bit more.

You can pick up your own The Controller People custom PS5 controller here!

The Controller People are aptly named. They put the work in to make quality products, and you can truly customize every aspect of your build. While there are plenty of standard parts and practices in play, the ClickStick back studs are terrific, offering a different feel to back buttons that are arguably better than what you’ve used before. All of that along with stellar customer service makes The Controller People’s custom PS5 controller a great pickup for anyone wanting a controller with extra personality at a fair price.

David Burdette is a gamer/writer/content creator from TN and Lead Editor for Gaming Trend. He loves Playstation, Star Wars, Marvel, and many other fandoms. He also plays way too much Call Of Duty. You can chat with him on Twitter @SplitEnd89.
Related Articles: The Controller People custom PS5 controller
Share
Tweet
Share
Submit