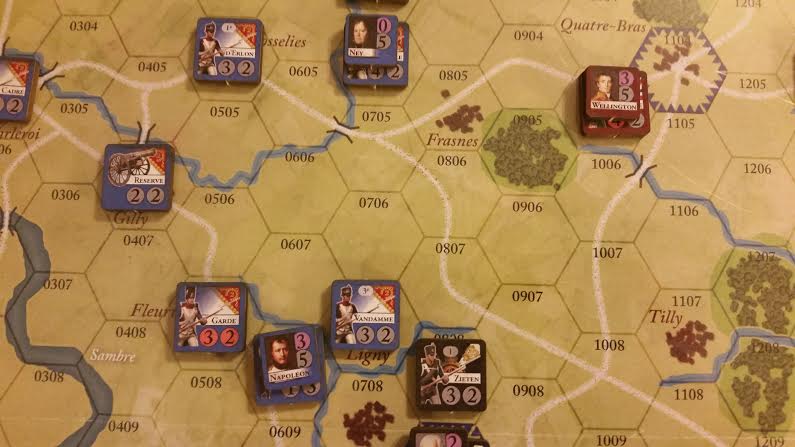 I could save everyone the trouble of reading the rest of the review and let you know that Victory Point’s Hundred Days 20 is a good game. But does that really tell you anything? After all, BoardGameGeek’s library includes nearly 300 Napoleonic games that have at least 25 reviews. Half of those have a rating of at least 7 and a good chunk of that includes games that recreate Napoleon’s crushing defeat at Waterloo in some way. It’s not enough to say that Hundred Days 20 is a good game but rather deciding if it stands out in a sea of worthy Napoleonic titles.

For those unfamiliar with Victory Point Games’ series, Hundred Days 20 is the latest in a long line of Napoleonic 20 games. The 20 represents the maximum number of counters used in each battle. The series busts the myth that war games must be month long affairs played in spaces the size of aircraft hangars. These games are meant to be set up and played quickly while still offering a good challenge. In this edition, the battles of Tolentino and the slightly more recognizable Waterloo are included. The Waterloo scenario is the third edition of the battle.

Hundred Days 20 is certainly eye-catching from the start. Both battles have beautifully rendered maps, but the most impressive thing is how they have a small footprint on the table yet have larger sized hexes so the counters never feel cluttered together. This may seem inconsequential considering the a battle consists of few counters, but it’s a nice feature, especially when several units start clashing together. The counters themselves are uncluttered and colorful. Each contains only two numbers representing attack and movement. Special units, such as guards or elites, have color coded numbers for easy identification. Included with the counters is one of the more unique accessories I’ve come across in a war game, a napkin. Brand new counters will wear off some soot from production, especially the black colored Prussians, so the napkin was a nice touch. Incidentally, though the soot came off on my fingers, it never stained the counters themselves. The final included items include a small deck of random event cards, a die, a set of markers, and the rulebooks.

The Iron Duke is Napoleon’s nemesis and equal in Hundred Days 20.

Getting into the game is fairly painless. The standard rule book may be 25 pages, but it’s so full of examples and illustrations that it’s a quick read. Both included battles have their own special scenario rules which are just a few pages long. It didn’t take me long to set up the Waterloo scenario and have a good understanding of the rules.

The updated Waterloo scenario begins earlier than Victory Point’s previous versions. The July 15 start date allows players to recreate the battles of Ligny and Quatre-Bras that led to Waterloo. This adds considerable replay value since the entire campaign can be explored rather than a single conflict. Players can choose to replicate Napoleon’s actual movements or test some what-if tactics.

Terrain, such as the river near Ligny, can be used as an effective defense in the game.

Once your counters are set up, Napoleon looks as if he’s in decent shape. His army is impressive. The Coalition forces of Prussia and Britain are scattered. But Hundred Days 20 has several game play features Napoleon must navigate. First, terrain plays a significant role in movement and battle. Secondly, random event cards can significantly hinder Napoleon’s forces through attack and organization penalties. This is a nice touch as it simulates some of the communication issues the French had in the campaign. Finally, Napoleon really has to be careful where to attack. That’s because the game causes you to attack all other enemies in your zone of control (adjacent hexes). This forces you to attack in line formation rather than slamming solitary units into the fray. It also adds some strategic thinking. Do you fight one battle at reduced odds to allow another battle a better chance of success? Tables and charts to show terrain effects, battle results, and morale ratings are all provided on either an easy to read chart or on the game map itself. It’s a smooth system that really amps the tension of maneuvering in a relatively short time frame.

Add to this the inclusion of dummy armies. The game can be played blind, meaning counters are turned with their nationality flags facing up. Dummy armies are added and add an interesting element to the game. The incoming attack on the right flank might be elite troops or nothing more than a feint to draw attention away from the real attack.

Once the basic premise is understood, there’s a wealth of additional rules that can be included. Smallish commander counters can be added to simulate a general’s ability to control troops in an area. Marshal Ney’s ineffectiveness is highlighted as is Wellington’s brilliance on the battlefield. Fatigue could be used to simulate the wear on front line troops, forcing the play of reserves or guard forces to keep units fresh. Players can also use optional weather effects tables which can bog down advancing troops. It’s a minor gripe, but it would have been nice to see the optional weather effects on the chart with the rest of the tables.

When fatigue is used, commanders must consider rotating troops from the front line to keep them fresh.

Both battles have key objectives for the attacker to capture. However, for Napoleon at Waterloo and his brother-in-law Joachim Murat at Tolentino, the game hinges on their armies’ morale. In my first play through, the French lost because Wellington’s route of Ney resulted in French morale reaching zero, an instant defeat. Victory in battles can sway morale between both armies, but morale can also be spent to boost troop effectiveness during battle or force march units to the front line. It becomes a dangerous game as the campaign wears on as decisions need to be made on how thin to run morale in an effort to get a vital breakthrough.

It may sound like a lot to digest, but one play through was enough for me to feel pretty comfortable with the system. The low counter count and great rulebook prevent the game from getting bogged down into rules discussions or analysis paralysis.

I’ve already stated that this is a good game, but after playing it I can definitely say it’s a worthy of a spot in any war gamers collection. It’s quick enough to be played in a sitting while being complex enough to provide a challenge. The components are great, and the rulebook is one of the best I’ve read. The expanded Waterloo campaign, not to mention the completely bonus battle of Tolentino, make this a highly recommended purchase.

Hundred Days 20 is a brilliantly executed game thanks to its great rulebook, quality components, and smooth gameplay. Though it plays in just an hour, there's enough depth to make for a rewarding experience.