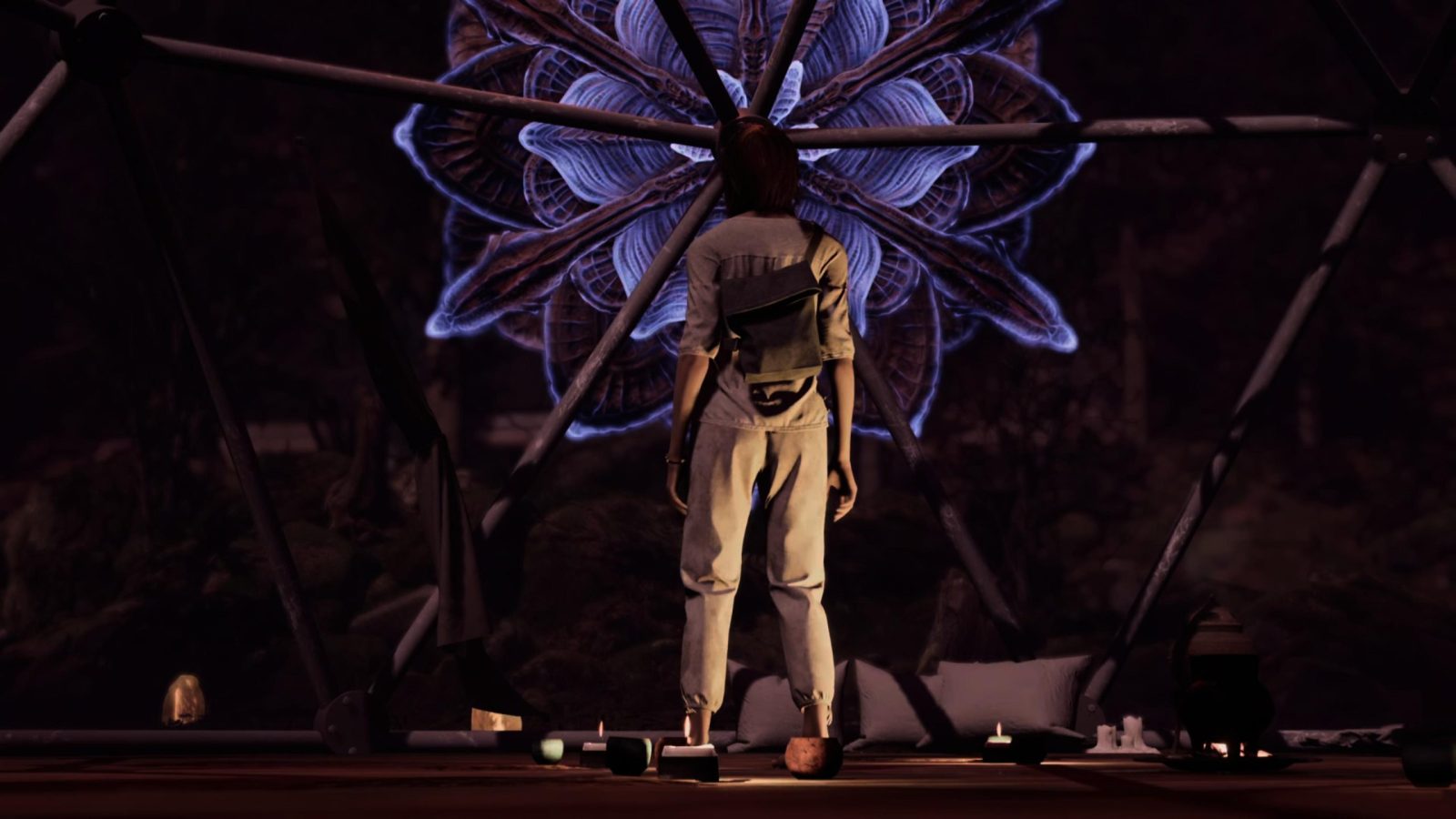 After agreeing to join her friend on a weekend spiritual retreat, Jess finds herself at the center of a cosmic dimensional rift. A group of troubled individuals have gathered at Glory Island to partake in a healing sanctuary titled the Prismic Science Spiritual Retreat. However, peace soon turns to discord as a group chant inadvertently opens a rift to a parasitic dimension called The Gloom that feeds on trauma and negative energy. Exploring an island sanctuary built on the bones of a bygone cult, Jess must keep the survivors together and seal off the encroaching dimension that seeks to consume them.

While a bit predictable at times, the story of Jess and the survivors is still an intriguing mystery to unfurl. Every person has arrived at the retreat to heal their past traumas, so getting to understand the cast of characters and their problems became part of the narrative itself. This is due to the nature of the Gloom, drawing out oppressive and negative thoughts within those suffering from its influence. These traumas are given form within this dimension, such as Jess’s deceased sister taking the shape of a swarm of flies that relentlessly pursues her. Much of the gameplay follows Jess’s attempts to reconnect the group to reverse the chant, and delving into the mental struggles of her peers as well as her own.

There are quite a few third person horror titles out there to sort through, but it’s often difficult to find one that really sets itself apart from the traditional staples of the genre. This is the best part of The Chant, with the horror theme being focused so purely on the spiritual and strange. The denizens of the Gloom include indoctrinated cultists and a lurid cross between plants and animals, that are almost hypnotizing to gaze upon. With non-traditional enemies, it is only fitting that Jess wields weapons of the same cloth. Instead of guns or knives, Jess can craft sage bundles, essential oils, witch sticks and more to brandish against the Gloom. 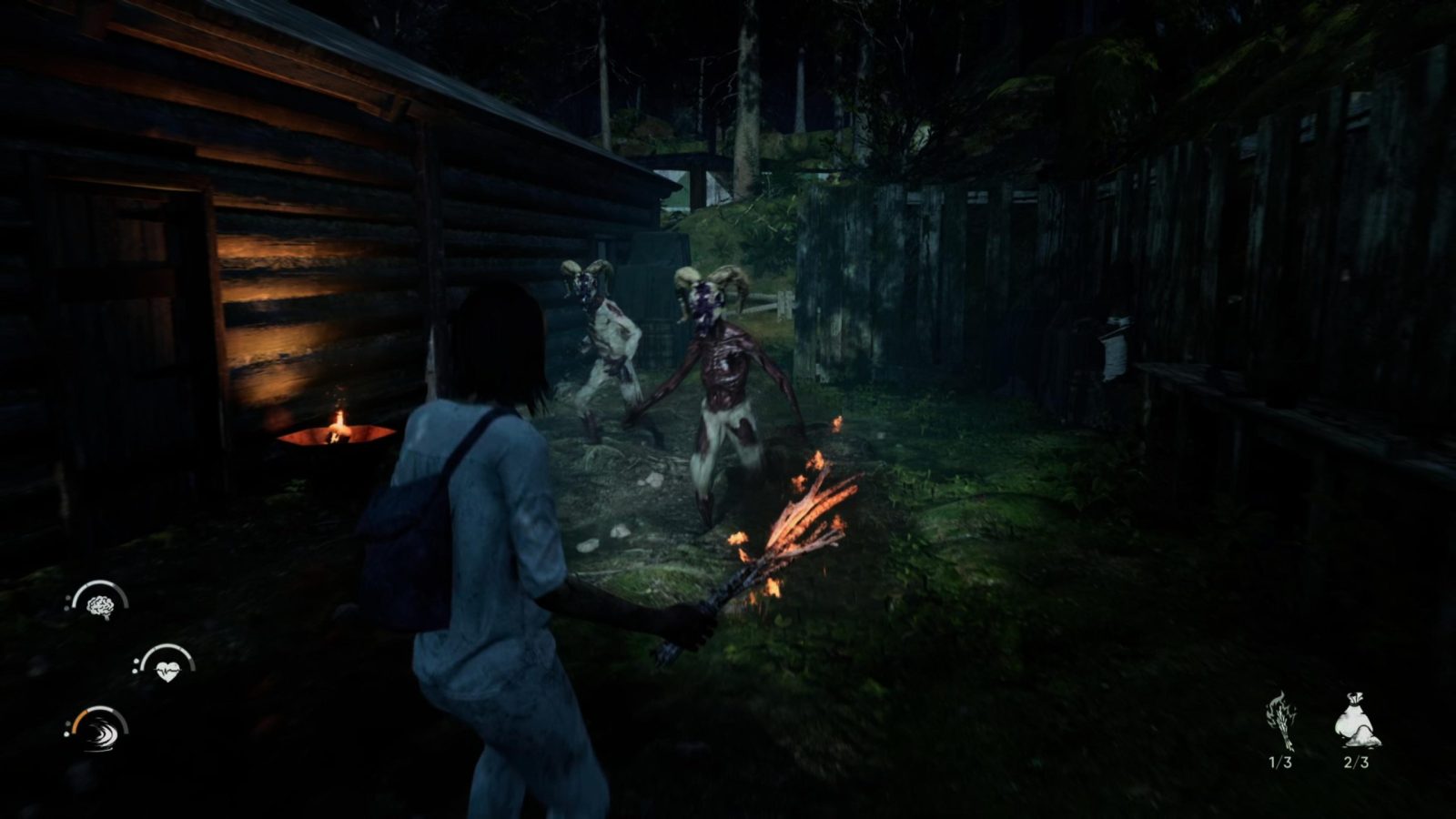 Finding what weapon combinations are most effective against which creatures encouraged me to not only craft a wide variety of equipment, but also ensure I checked every nook for crafting materials. Jess also has access to various prismatic abilities granted by the crystal around her neck that can help her escape or fight back against groups of enemies. My favorite of these is the Crystalize ability, which summons a wave of spikes from the ground to skewer anything too close. These combat mechanics in practice are fun to interact with, and I especially enjoyed gathering new abilities to wield through the prismatic crystals. 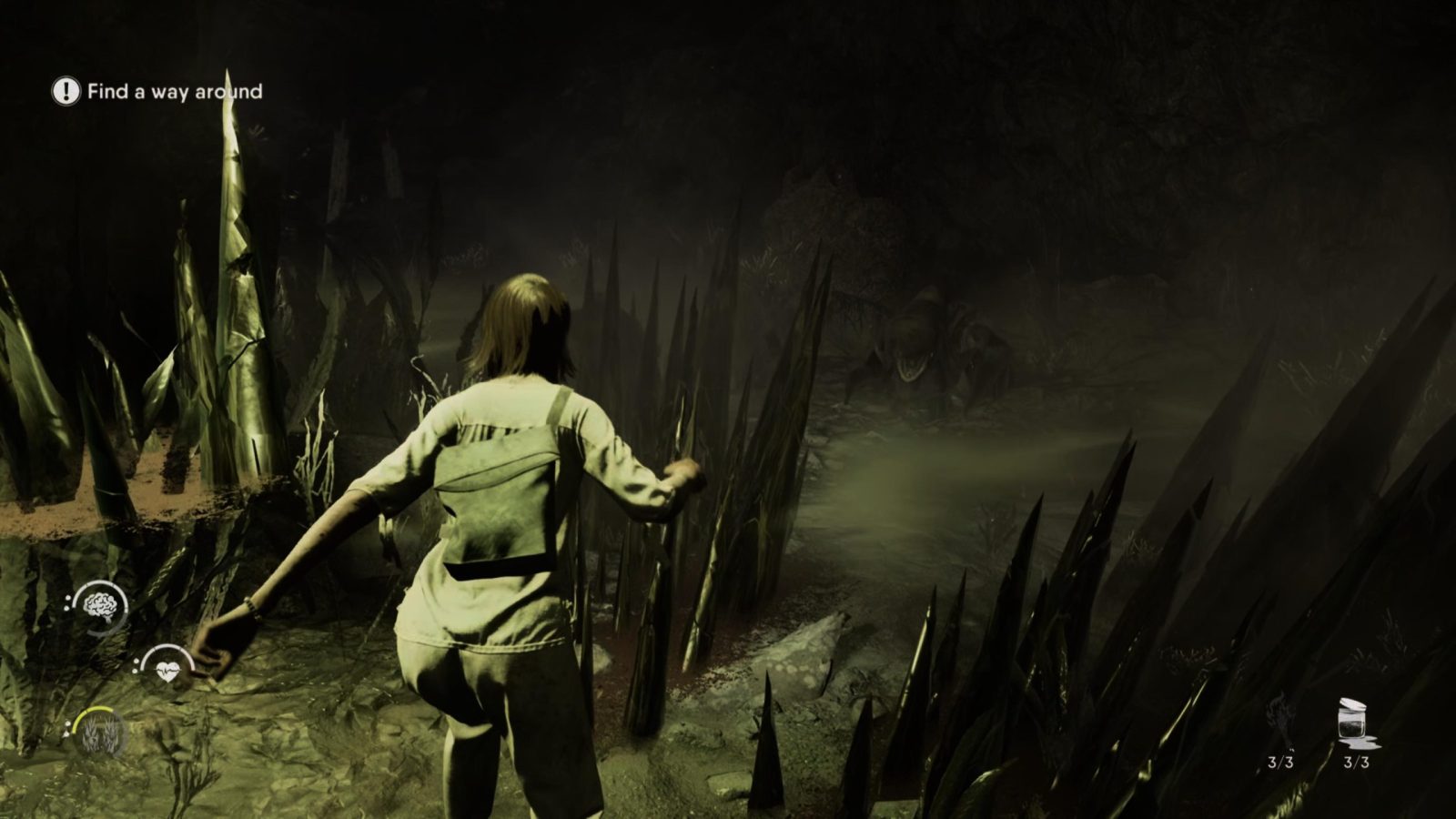 The Chant features three different meters to manage; Body which governs your health, Mind to monitor your sanity, and Spirit that allows for prismatic abilities to manifest. While simple on a surface level, these bars are actually important to the overall narrative as well. Consuming items to regenerate Mind, Body or Spirit will net you experience to the respective skill tree, and furthers your connection to those aspects of your psyche. Certain dialogue options throughout the game will also grant you experience towards these three paths depending on your responses.

I enjoyed having something normally mundane like a health/mana bar integrated into gameplay in this way, but I did find it to be a bit of a double edged sword. There were a few times where I found myself choosing a dialogue option purely for the stat upgrade, rather than the narrative choice. With consumables granting experience as well, it means that you might be locking yourself into an ending just by using too much of one item without even realizing it. I tended to explore the gloom infested areas deeply, which meant I was using a lot of lavender to keep my Mind meter topped up, and in turn finished the game with much more experience in that tree than the other two. It does feel a bit odd that the endings are tied to what stats you may or not be focusing on, but I still found it to be an interesting game mechanic nonetheless. 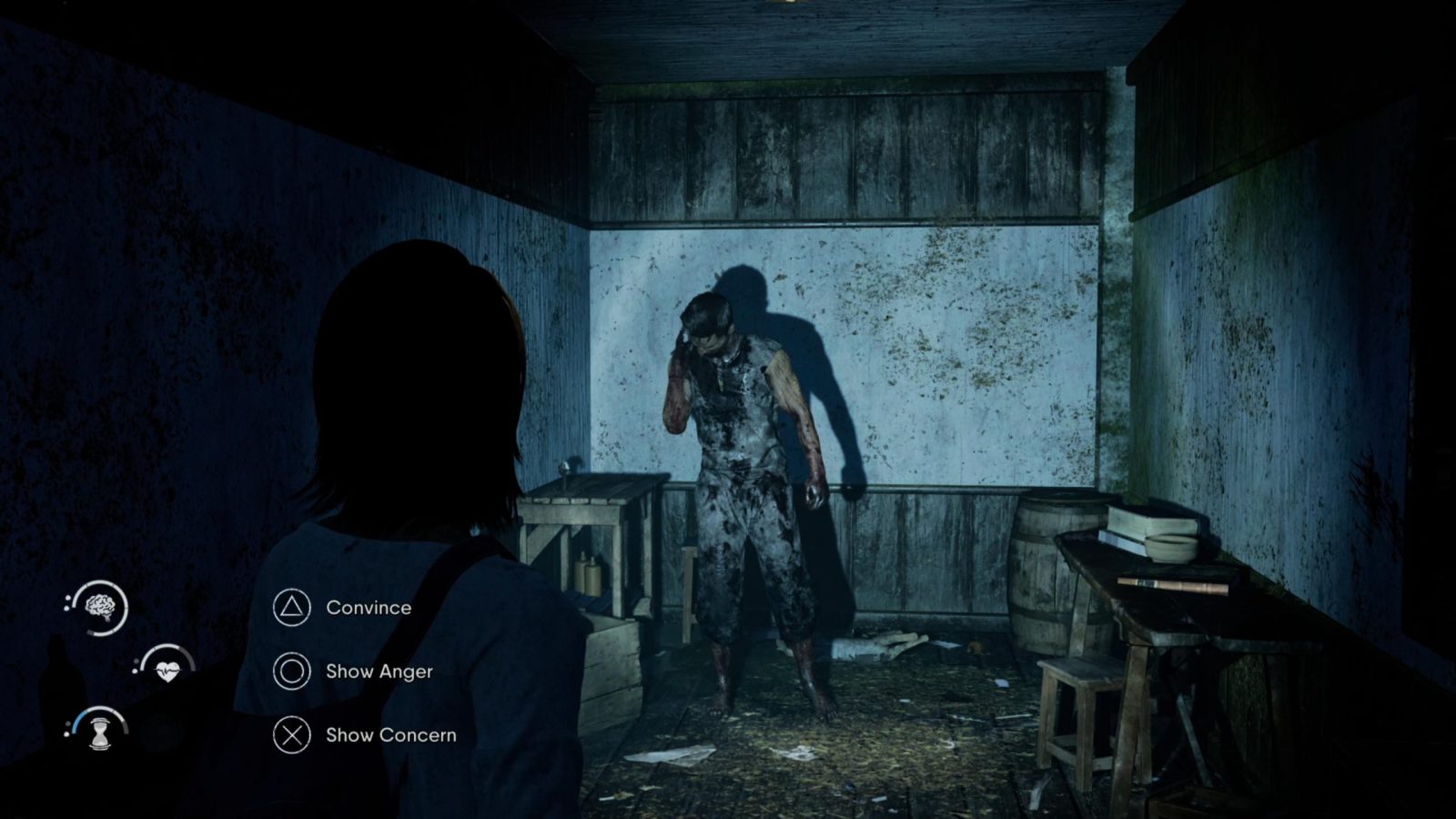 Many traditional horror games are very dark and somber, and The Chant takes a departure from this cliché in favor of a more colorful experience. The areas in which the Gloom dimension has bloomed are vibrant with bioluminescent flora, and the enemies found within them are equally psychedelic. This is accented by the crumbling ruins of a cult that once inhabited the island and the new-age spiritual retreat overlaid upon it.

The entirety of the island is interwoven, and exploration is open-ended with a metroid-vania progression system. Many areas of the island have succumbed to Gloom fissures, and can only be accessed once the player retrieves the correct prism to allow them passage. These are easily recognizable, as the color of the gloom matches the necessary prism required to enter. This exploration system made it feel as if all the different locations of the island actually existed in one place, and gave a sense of scale to the world. There is also a fast-travel option that unlocks later in the game to ease the amount of time spent walking around if you prefer a quicker trip back to the center of the island or back to a previously explored location. 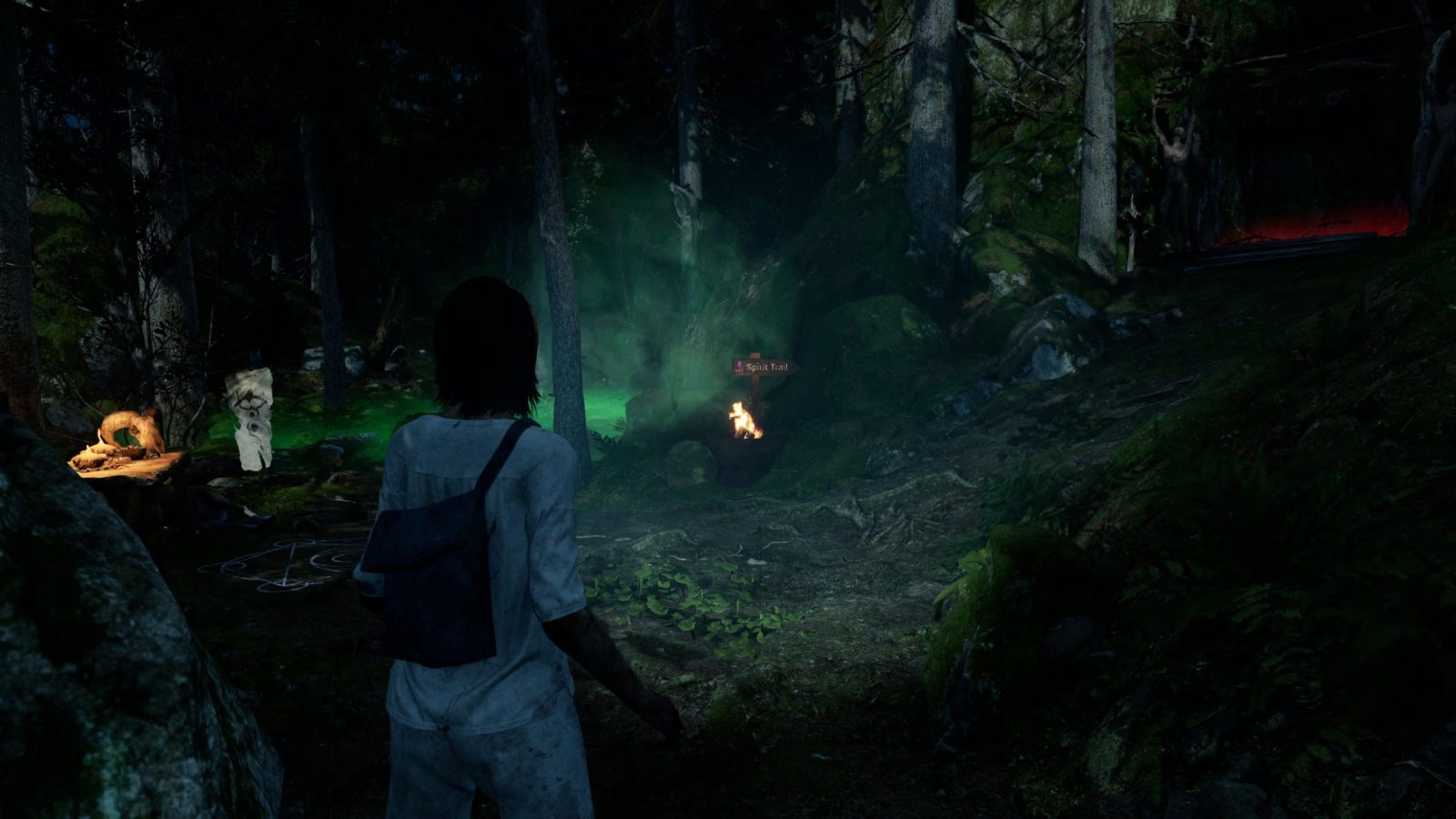 While the game is quite unique in the visuals department, I will say that some of the animations and lip sync can be a bit stiff at times. While not game breaking in any regard, it can disrupt immersion a bit when the characters’ faces don’t seem to match the dialogue, or when their expressions appear slightly plastic. The voice acting for some people in the game is also a bit flat at times, though I would like to commend both Siobhan Williams and Emily Tennant, who voice the protagonist Jess and supporting cast member Hannah respectively.

I will say that the ending of the game left me a bit puzzled, however the journey I took to get there was remarkably uncanny. Delving into the Gloom was just as chilling as it was mesmerizing, and it was refreshing to see a horror game that utilizes psychedelic imagery in this way. It may not be redefining what the survival horror genre can be, but the departure from traditional scares is well appreciated.

A visually striking take on the survival horror genre, The Chant solidifies its own identity within the alternative science of prisms and natural remedies. Unique game mechanics serve to create an unusual but fun experience, even if at odds with the overall narrative at times.

Corvo is a writer who loves to explore journalism through video games. Writing and editing reviews for triple-A games and indies alike, he finds his passion within expressing his experiences in a fair and accurate manner. Some of Corvo's favorite games are Destiny 2, Mass Effect, and Disco Elysium.
Related Articles: The Chant
Share
Tweet
Share
Submit