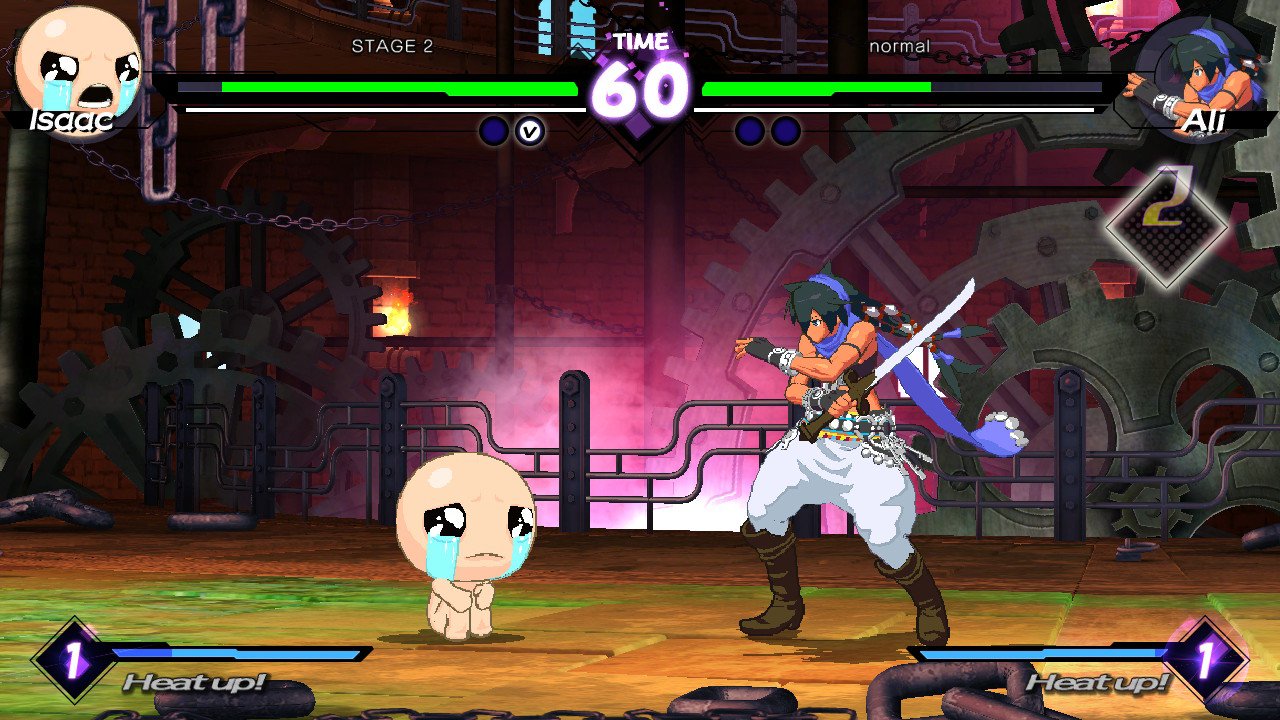 If there’s one genre that’s showing a diverse blend of gameplay mechanics as of late, it’s got to be fighting games. From the technical SoulCalibur VI and Street Fighter V Arcade Edition to the accessible Blazblue Cross Tag Battle and Super Smash Bros. Ultimate, there’s literally something for everyone that wants to try out a fighting game. With nonsensical stories also comes some surprising guest stars, and we’ve seen everyone from Darth Vader to the Teenage Mutant Ninja Turtles to even Bad Box Art Mega Man represented in some form. With Studio Saizensen and Nicalis’ Blade Strangers, we’re treated to some of the weirdest additions to an indie fighting game crossover yet, as well as some simplistic yet accessible mechanics that appeal to both beginners and veterans of the genre.

Blade Strangers takes place in a multidimensional plane, where a host of servers (literally a brain in a jar scenario) struggles to save their worlds from falling apart by creating Blade Strangers to defeat an evil force. They do this by altering the fighters’ memories and state so that they’re participating in a fighting tournament to see who will become the best. The fighters are understandably confused at their surroundings and the overlord servers use this to spark fights and skirmishes around the different worlds. It’s a tournament fight arc that’s been done to death (recently prominent with the Persona 4 Arena series of games), but it advances the story enough that it isn’t much of a problem.

While the story is a rather generic one for its premise, the cast of characters is not. Out of the fourteen offered, twelve characters were chosen from games that had involvement from Studio Saizensen (Code of Princess and Umihara Kawase, the latter which had a localized entry in the form of Yumi’s Odd Odyssey), Nicalis (The Binding of Isaac and Cave Story), or are other guest characters (Azure Gunvolt and Shovel Knight). While the plot does gravitate towards Studio Saizensen characters (to the point where Code of Princess protagonist Solange is the de facto main character for most story-related cutscenes and even the UI reflects the recent Code of Princess EX), there is a nice mix of other characters from different titles. I think it’s safe to say no one expected Isaac to make an appearance, and he’s just adorable when he shanks the competition with Mom’s Knife. Blade Strangers has an eclectic cast of characters that is sure to please fans of the respective franchises, and many gamers will probably pick up Blade Strangers by merit of this fact alone.

The gameplay in Blade Strangers is a simplified take on the 2D battle system with 2.5D sprites. Matches take place in a 1v1 area, with players trying to deplete their opponent’s health to zero. By whittling down opponents’ health or taking enough hits, you can also build up your special meter which can unleash some deadly attacks if they can connect, or you can use the meter for defensive moves that can cancel combos or segue into another attack. In addition, after getting pummeled for a while, you can activate Heat Up, which will make you stronger for a short amount of time. While most fighting games pride themselves on intricate movesets, Blade Strangers opts for a four-button scheme: a light and heavy attack, a skill attack, and a unique attack. The game runs at a very smooth framerate, even in handheld mode, and it does look rather pretty in action, with stages from the different games looking pretty great in the background.

Each character’s general moveset is interchangeable but will use the button inputs differently. Original character Helen will use her sword and shield with dash attacks while someone like Cave Story’s Curly will utilize her repertoire of weaponry. There is a number of special moves that each character has, and it helps to experiment with a person’s playstyle by delving into battle.  It feels like something out of Smash Bros. mixed with the simple but deep techniques of Blazblue Cross Tag Battle, and while I imagined the gameplay to be stale after a few matches, the variety of moves for each character is deep. It’s vastly different than something like Pocket Rumble, which I disliked because of its overly simplistic moveset. On the other hand, Blade Strangers’ system doesn’t sacrifice accessibility for depth, and it’s one of those games that anyone can easily pick up, but will reward those who want to put in the time to practice.

The main gameplay mechanics are superb, but Blade Strangers is a game meant for the multiplayer modes. Single-player modes are limited to story and arcade modes, which are basically the same thing, being a seven-battle gauntlet. The main difference is that the former has pre-scripted battles and cutscenes. While I didn’t mind the story, it’s a shame that we only get text screen cutscenes that aren’t even fully voiced at times. Like Code of Princess EX, we also don’t get an English dub for the characters, which is rather egregious considering Shovel Knight isn’t a Japanese franchise and he has voiced lines in Japanese. By contrast, you have Isaac with a few of his items and pre-battle introduction voiced in English, so it’s that odd “Frank West speaks English in Tatsunoko Vs. Capcom” situation here. Not all characters are unlocked at the start of story mode, so you’ll have to play through different characters’ campaigns in order to experience all sides of the story. As a side note, the game humorously lampshades Solange’s wardrobe decisions from disgust to bewilderment during her story mode, which I thought was pretty funny considering most of the other characters’ campaigns are somewhat underwhelming.

YOU HAD TWO GAMES TO BUY SOME ARMOR, SOLANGE.

Aside from the two main campaign modes, you also get a training mode, a combo challenge, and a survival mode that will beat you to a bloody pulp if you’re not prepared. Local and online multiplayer is included here, and while the latter was rather barren during my playthrough due to it being a review copy, I found it cool that the game tracks the disconnection percentages of each user; this means that being unsportsmanlike in-game will lead to some consequences. You can create rooms based on different server locations, although I wish that you could just do a simple “search all locations” option rather than specific areas. Local multiplayer is a treat though, and the Switch’s portability mixed with the simplistic mechanics of the game make this perfect for split Joy-Con play.

Blade Strangers is an odd mix of zany characters and entertaining gameplay. Its unique four-button fighting gameplay is a refreshingly accessible experience for anyone that wants to duke it out with Shovel Knight, Isaac, Quote, or any of the fourteen different fighters within the title.

Elisha Deogracias is an aspiring accountant by day, freelance writer by night. Before writing for Gaming Trend, he had a small gig on the now defunct Examiner. When not being a third wheel with his best friends on dates or yearning for some closure on Pushing Daisies, he's busy catching up on shonen manga and wacky rhythm games. Mains R.O.B. in Smash. Still doesn't know if he's a kid or a squid.
Related Articles: Blade Strangers, Indies
Share
Tweet
Share
Submit