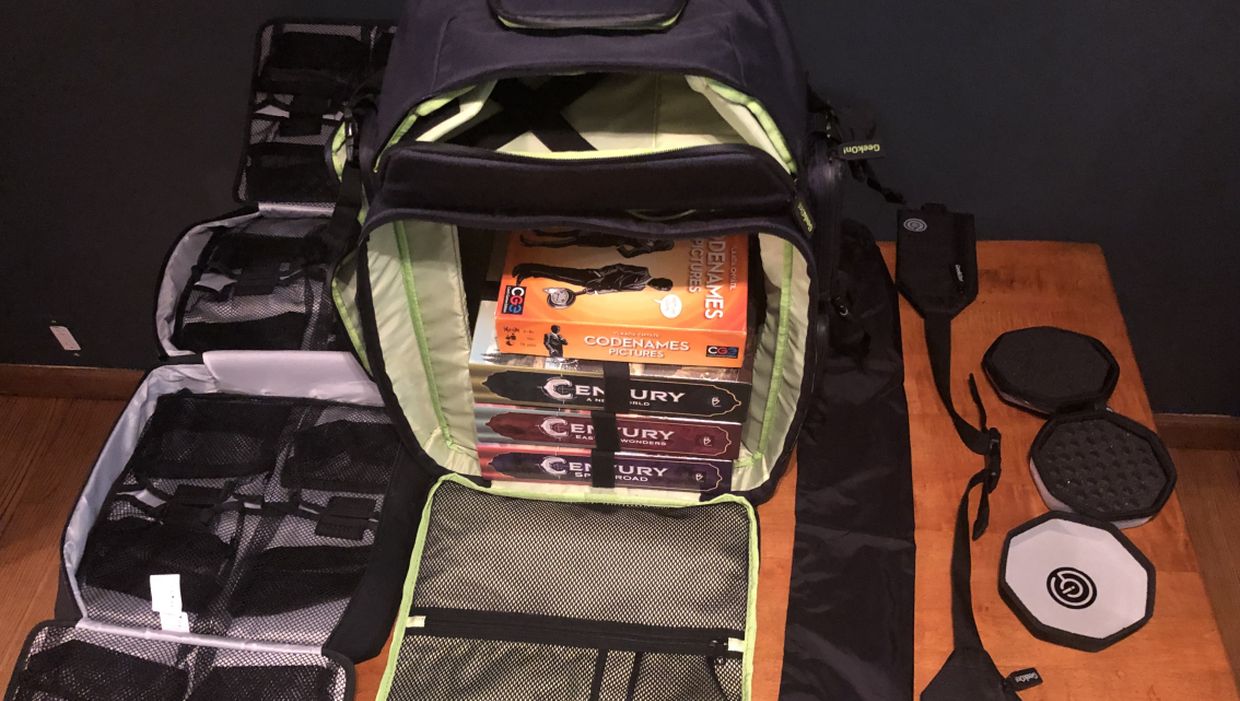 I love my wife. When she gives gifts, she always considers the interests of the person she is getting the gift for. One year for Christmas she gave me a personalized beach bag. I admit I was a bit confused by the gift, but she told me that she thought that I could use it to carry board games when we travel. This was a great gift for the times when I would take small games or a couple of regular sized boxes. However, if I’m going to a game day I like to have a lot of variety, and that usually means that I need to bring games in other bags. I have some large Ikea bags that I can use to carry games, but they can get too heavy to carry around for even short distances. When GeekOn! contacted me to try out one of their backpacks, I jumped at the chance to see how well they would work.

When I opened the backpack, I was surprised at how many zippers and storage areas there were. The front has several mesh pockets that can be used to hold components, snacks, writing utensils, battery packs, and other miscellaneous items. The main compartment is about as wide as a typical Ticket to Ride box. However, it’s just over 8″ deep. This makes it great for games like the Century and Codenames series. You can also put one or two larger games vertically with a couple of smaller games horizontally into the main area. A single large box game like Twilight Imperium can also be placed vertically without any problem. 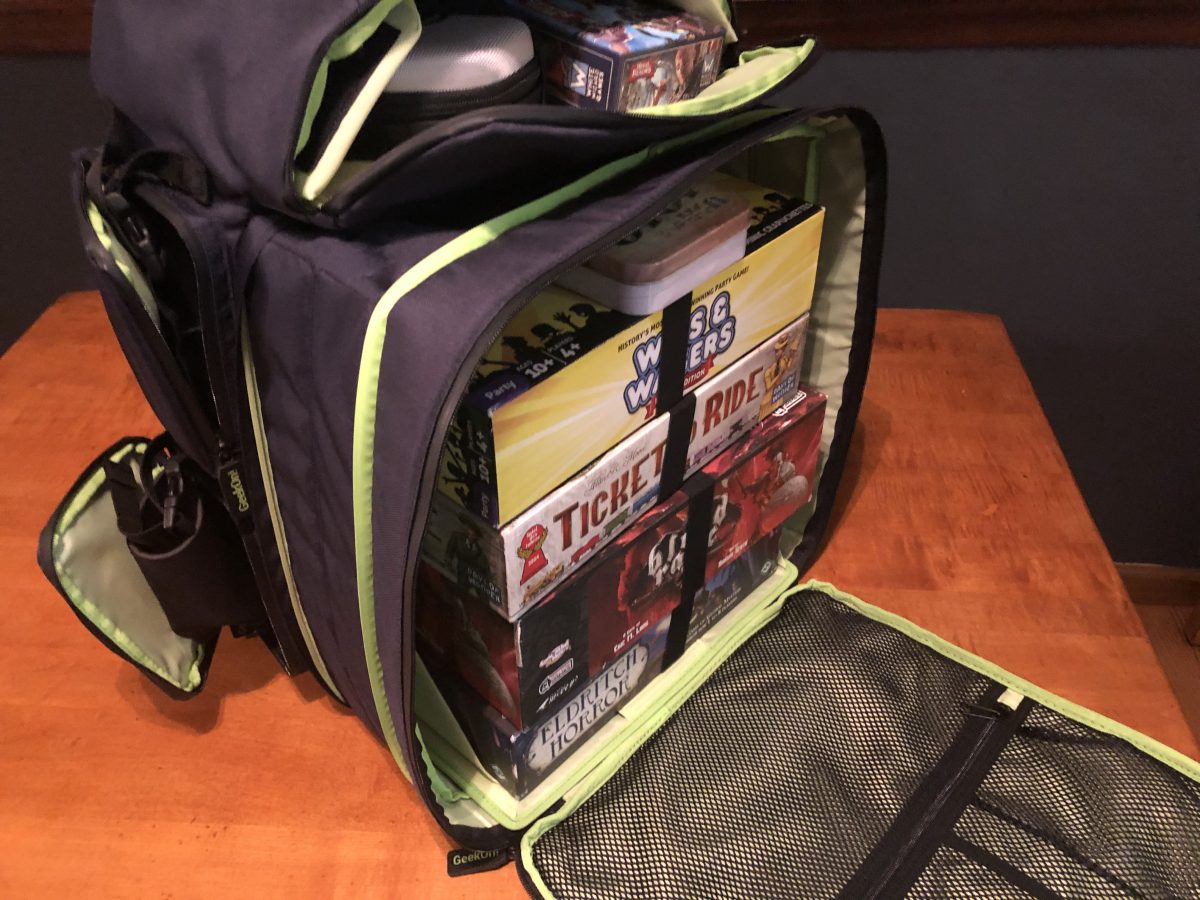 The magic really happens when the main compartment gets expanded, adding another four inches of depth. Now the games in a typical square box can be placed horizontally instead of vertically, increasing the number of games that can be placed in the main compartment. That 16.5″ of height can handle several games for a long gaming day. You can even fit Gloomhaven and Sword and Sorcery for a heavy dungeon crawl weekend. However, the weight of the backpack could break your back with all that gaming goodness. GeekOn! has a waist belt that can be purchased, and I highly recommend it if you plan on utilizing the backpack to its fullest extent. It’s also surprising how much depth that four inches adds behind you. After I expanded the backpack at conventions, other people ran into the backpack a significant number of times, even though I didn’t necessarily have an issue of intentionally swinging the backpack into others.

A small compartment over the main compartment can hold some small games, but it has specialty storage area. A pocket on the right holds cards while the left side has elastic straps to hold their dice tray and case. Even with these filled, a few small card games can be placed in there, but it’s great for games like Hero Realms. The floor has Velcro to attach it to the back wall. When it is unattached, it gives a couple of extra inches to squeeze in a small box or two. 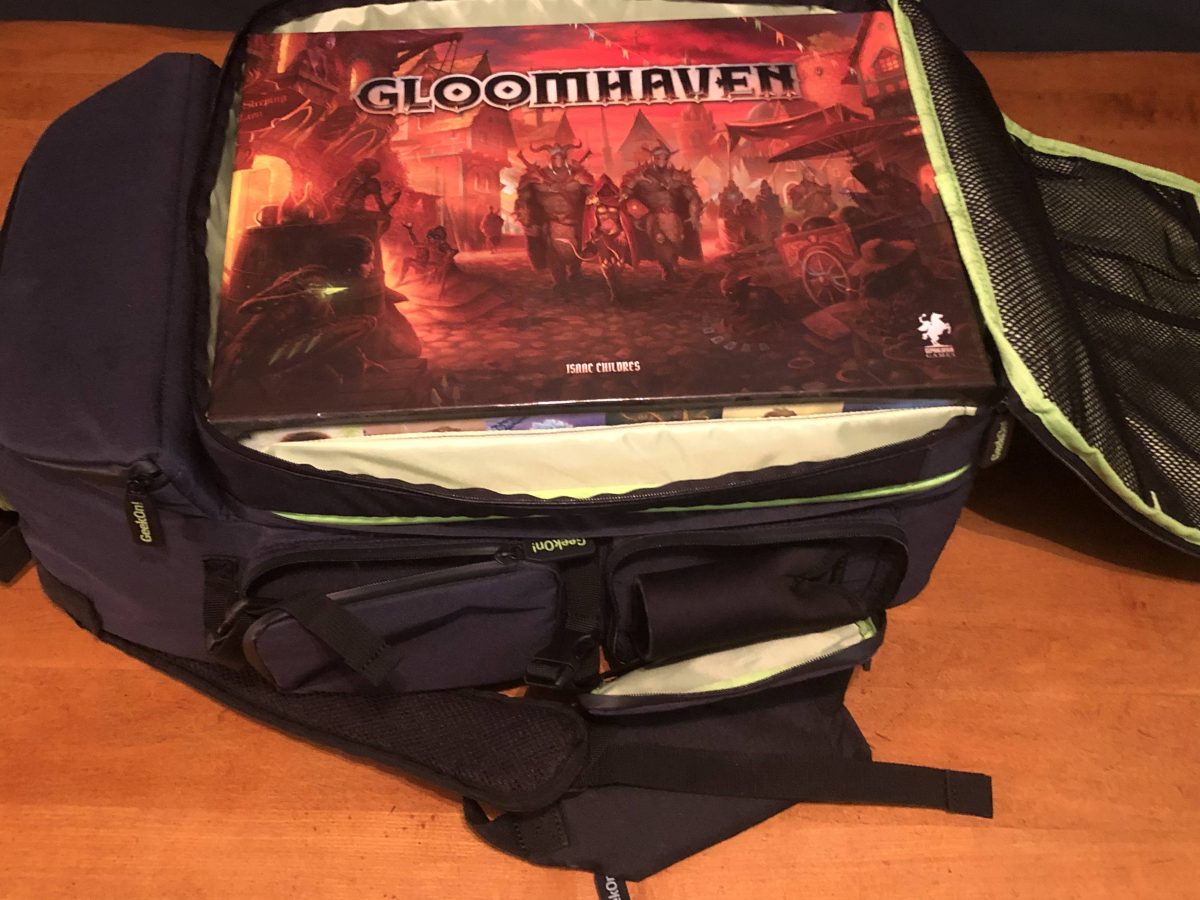 Several small side compartments and one on the top adorn the outside of the backpack. The bottom two side pockets hold beverage coozies, perfect for holding water bottles or some other drink bottles while at a convention or game day. The top two pockets are empty, able to hold typical card games and other small boxes. The top pocket contains a few elastic bands, holding charging cords, your cell phone, and USB drives in place.

What’s amazing is the number of pockets that GeekOn! created that might not be noticeable at first. The very back has a zipper that can be opened to hold notepads, game manuals, and other papers. The straps of the backpack include some storage, with one side having a pen slot and sunglasses holder with the other having a long zipper to hold keys and business cards. 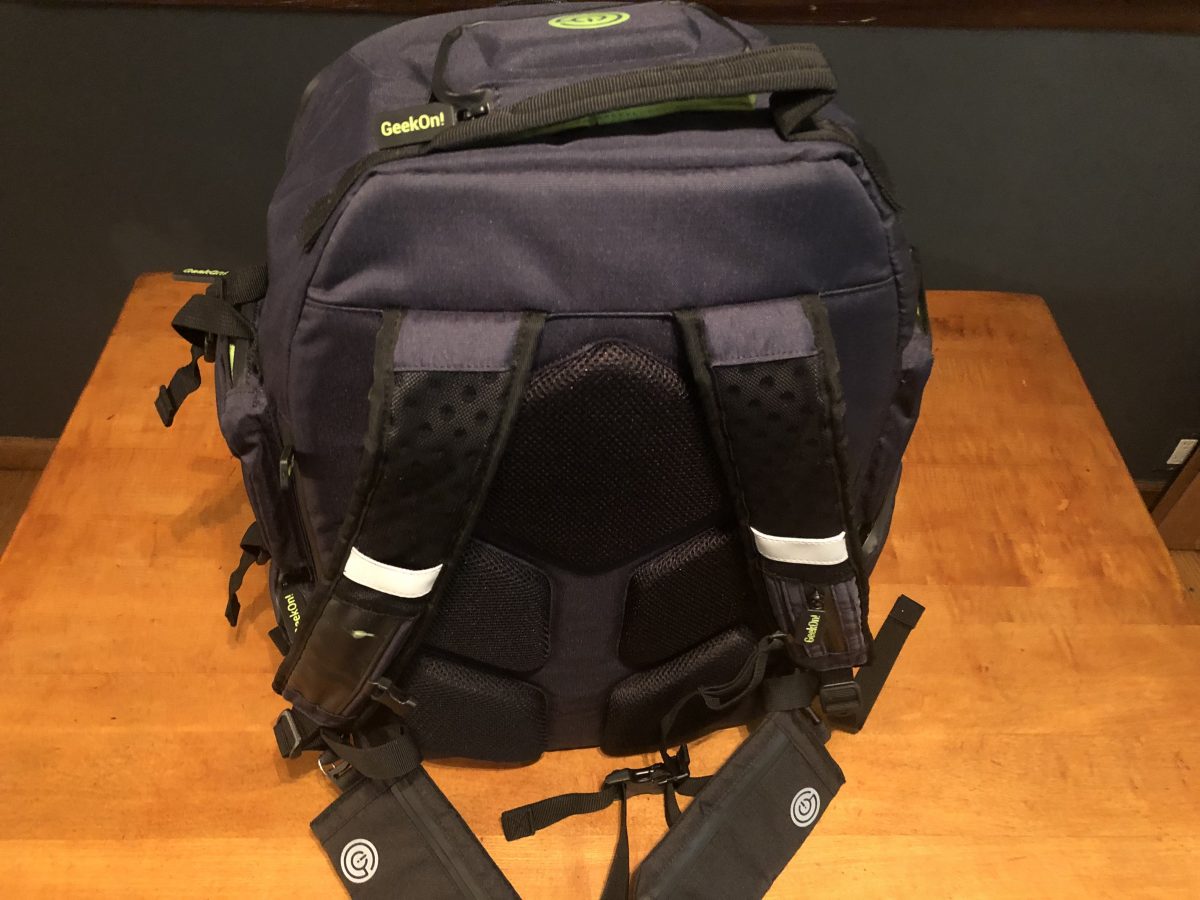 If you’ve ever worn a backpack for an extended period of time, especially indoors, then you know how sweaty wearing a backpack can be. The cushioning on the backpack helps air flow, making it more comfortable to wear it for an extended period of time. However, I highly recommend getting the waist strap from GeekOn! It really helps to shift weight off of your shoulders which helps when carrying all of those heavy game boxes.

While most of the advantages of the backpack are easily visible when looking at it, some features aren’t noticeable at first glance. A backpack like this carrying heavy cargo could burst at the seams after many uses. I’ve had several laptop backpacks separate at the top where the hand strap is located. However, they have reinforced seams to make sure that the backpack will hold up to the weight.
The backpack also features waterproof zippers. These zippers aren’t just featured around the main bag compartment, but every external zipper is waterproof. I did think about placing my backpack into the shower with several games in it to see what the carnage might be, but I decided against that. However, whenever I went out in less than ideal elements, I never found any evidence of water getting into the backpack. 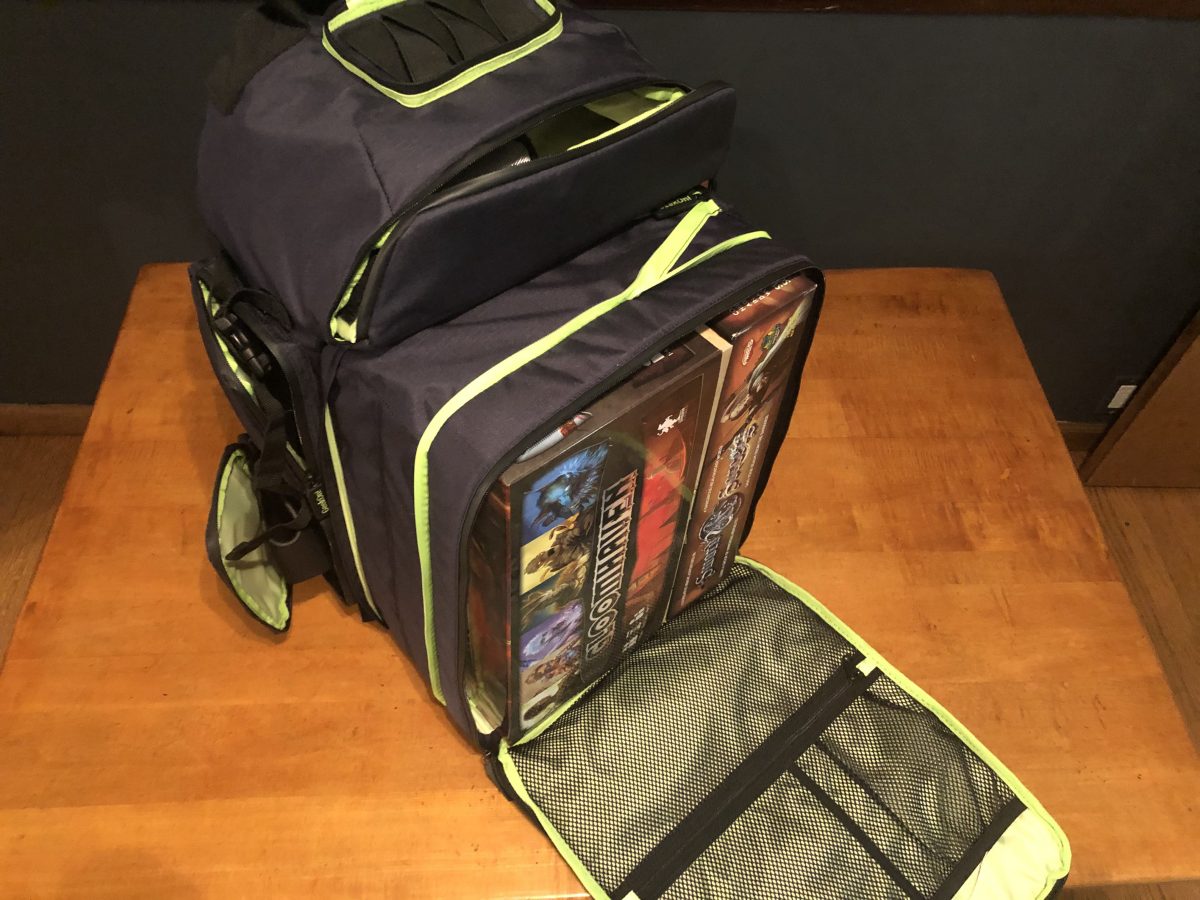 GeekOn! carries other products as well for your gaming needs. The aforementioned dice holder and tray are great editions for RPG players and those who like to bring their own dice along. To help keep your boxes from opening in transit, they have 8″ and 11″ elastic box bands. They stretch so that you can use them on all sizes of boxes without worrying about the bands causing damage to the boxes. The playmat dry bag can be used to hold playmats for several games or map grid paper. It conveniently fits in the side straps of the backpack. They also have what they call the Quad-Mod Gaming Module. This package contains four sections with several pockets. These can hold dice, miniatures, tokens, cards, and other miscellaneous items.

The engineering behind the backpack is impressive, but the price of it may be a prohibitive factor. The backpack by itself is $200, with all the pieces being available as separate add-ons or in a bundle for $300. The price tag is more expensive than other board game backpacks, but you certainly get what you pay for in this case.

GeekOn! has marketed this as the Ultimate Boardgame Backpack, and it's easy to see why. It comes with a ton of space and features to make it comfortable for the size and weight that it can become. It comes in multiple colors and can be ordered directly from their website. Almost every game will fit in it, with the only exceptions I've found are Ticket to Ride 10th Anniversary and Too Many Bones, which have larger boxes than most games out there. If you constantly travel with board games to events, then I don't think you can find a better travel solution than this.

While not working as a Database Administrator, Keith Schleicher has been associated with Gaming Trend since 2003. While his love of video games started with the Telestar Alpha (a pong console with four different games), he trule started playing video games when he received the ill-fated TI-99/4A. While the Speech Synthesizer seemed to be the height of gaming, eventually a 286 AT computer running at 8/12 Hz and a CGA monitor would be his outlet for a while. Eventually he’d graduate to 386, 486, Pentium, and Athlon systems, building some of those systems while doing some hardware reviews and attending Comdex. With the release of the Dreamcast that started his conversion to the console world. Since then he has acquired an NES, SNES, PS2, PS3, PSP, GBA-SP, DS, Xbox, Xbox 360, Xbox One S, Gamecube, Wii, Switch, and Oculus Quest 2. While not playing video games he enjoys bowling, reading, playing board games, listening to music, and watching movies and TV. He originally hails from Wisconsin but is now living in Michigan with his wife and sons.
Related Articles: GeekOn! Ultimate Boardgame Backpack, Tabletop
Share
Tweet
Share
Submit