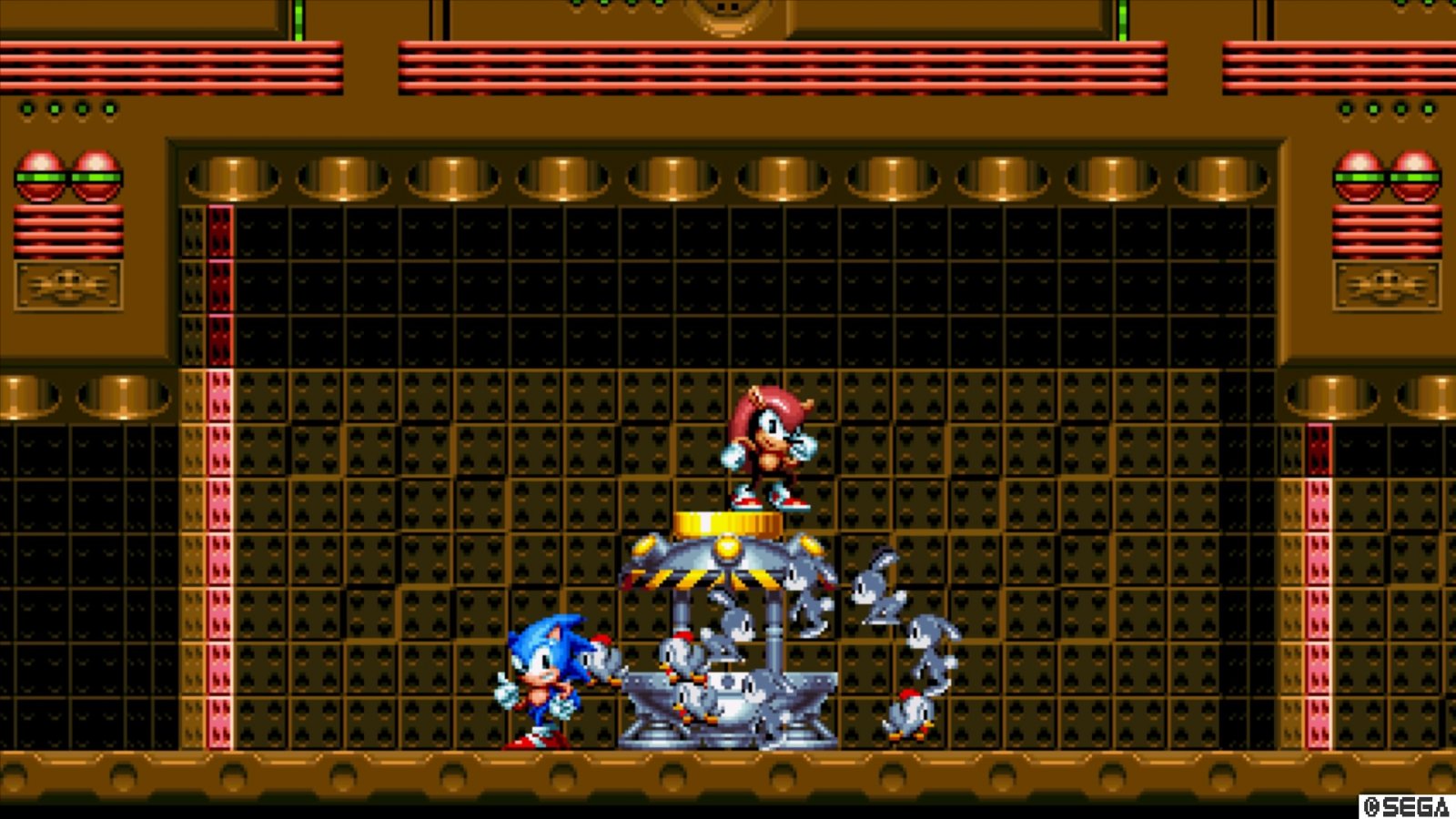 For years I thought the dream of a good new Sonic game had long passed. I started to wonder if Sonic was ever even good, and if we had just been delusional for some part of the early 90s, but as Sonic Mania proved when it launched last year—and what Sonic Mania Plus reinforces—is that it is, in fact, very possible. Sonic Mania inexplicably feels completely fresh while also mining the depths of its history to feel like something ripped out of time, and the new additions to Sonic Mania Plus (Encore Mode with two new characters and some remixed visuals) fit the series like a pair of red sneakers.

Sonic Mania Plus most notably offers two new playable characters in Ray the Flying Squirrel and Mighty the Armadillo (not completely new as they both appeared in arcades in SegaSonic the Hedgehog back in 1993). Even if you were one of the few who played that earlier arcade game, this time out they no longer control identically to Sonic and they have their own unique moveset to set them apart. They are so well realized as Sonic characters that, had I not known any better, I would have thought they had been in the games alongside Tails and Knuckles the whole time.

Ray is a plucky yellow squirrel who can swoop through the air à la Super Mario World’s cape, and Mighty is a red armadillo with a gruff attitude and a chip on his shoulder who can slam into the ground. Both were fun additions to the game that worked well alongside the series mainstays like Sonic and Knuckles. It speaks to the charm and usefulness of the new characters that given the option, I almost always preferred using Mighty because his slam ability was so useful for cutting a wayward jump short or smashing an enemy.

There were some other minor changes to the overall package (not just that it is literally now in a physical package instead of exclusively downloadable). You can now play the competitive mode with up to four players, which adds a fun extra challenge, but the mode was never a real draw for me. Racing against a friend through a zone did offer a neat way to see just how large and varied the levels could get though.

Aside from those changes, the Encore mode makes subtle changes to the color schemes in the level, changing things just enough to make them feel different without having to actually change the level layout. Green Hill Zone loses the blue skies and takes on an orange hue of dusk. It’s an impressive attention to detail in a game that is founded on those details.

If you didn’t catch Sonic Mania when it first launched in 2017 though, it is Sega’s attempt at revitalizing 2D Sonic by joining with popular members of the Sonic community known for making faithful recreations of classic Sonic. That idea pays off here as, unlike missteps like 2010’s Sonic the Hedgehog 4, Sonic Mania mixes just enough old and new to bridge the gap between the early 90s and today. You start out in the familiar Green Hill Zone and it feels like a remake for a split second before you start to notice little differences. As you progress, you find yourself in reimaginings of zones from Sonic 1, 2, 3, and Sonic & Knuckles before running through completely new zones made for Sonic Mania. All the older zones perfectly capture the spirit of those classic games while introducing new paths to follow to make them new again. It’s an amazing progression that follows the trajectory of classic Sonic while also managing to carve out an interesting path forward.

All the zones have their own unique platforming mechanics like teleporters in the Titanic Monarch Zone or huge guns that launch your characters in the Mirage Saloon Zone. They all offered new and exciting ways to interact with the game that kept Sonic Mania engaging all through its 12 different zones. I was always kept on my toes when encountering new obstacles or finding new secret areas. Plus depending on the character you choose, some of the levels and boss fights are unique. Sonic and Tails might take on a different variant to a boss than Knuckles or Ray.

Not only does the gameplay perfectly recapture the Genesis versions (down to the low-poly 3D bonus stages and fun Sonic Spinball areas) but the sprite based art goes a step beyond what was possible on the Genesis while managing to evoke that same crisp 2D art style of the day. It feels like a natural extension of those games, almost like they had made this game not on a Genesis but maybe a Saturn or Dreamcast. Add in the higher resolution that Sonic Mania runs at on modern machines and it is an absolute treat. It’s truly a beautiful game, especially when Sonic gets moving and the screen whips past at a stunning 60 frames per second.

As good as all of that is, somehow the music steals the show here. Tee Lopes, who made his name remixing older Sonic soundtracks, outdoes himself with some of the best music I’ve heard in a platformer in years. Studiopolis Zone is a true standout with an up-tempo beat and even a few synthesized lyrics thrown in now and again. I wouldn’t begrudge anyone who played through this game exclusively to hear the soundtrack; It really is what pushes this game over the top. Every other aspect is already so solid that it’s almost unbelievable that Sega managed to come together on this and assemble a Sonic package that is not only good, but completely refreshes the series and makes Sonic vital in 2018.

I wouldn’t have thought it possible; Sega has re-entered the platformer space so strongly that, in some areas, it is Nintendo that could take notes and learn from what Sega has done here. Where the endearing music of original Mario started to take a backseat to the bland soundtracks of the New Super Mario Bros. games, and where the fan made remake of Metroid II was more faithful and interesting than Nintendo’s official remake, Sega has stepped up and delivered on something special in a way Nintendo is unwilling to. I can’t wait to see what this team has up their sleeves next for Sonic.

Racing through remixed and all new zones at blistering speeds is reminiscent of old Sonic while also surpassing it in almost every way. The new characters they bring to Sonic Mania Plus are excellent additions to the stable of playable critters, so it’s somehow an even better package than Sonic Mania was last year.

Nathan lives in Colorado catching Pokemon on the Go and at home. He previously spent three months interning for Game Informer before coming back to Gaming Trend to spread the good word on video games. His real passion, though, is collecting different versions of the 3DS and other weird Nintendo garbage. It's a never-ending quest for less space in his house.
Related Articles: Sonic Mania Plus
Share
Tweet
Share
Submit