I’ve found it hard to find a good fantasy VR title available on Steam. Like, really hard. I’ve gone through my fair share and exhausted them, including titles like Unknightly, Skyrim VR, and Vanishing Realms. But, most of the time they get boring pretty quickly since the gameplay gets stale or the level design is horrendous. But then The Wizards – Dark Times popped up, and that title has addressed most, if not all, of my woes for VR fantasy games.

I won’t lie, I didn’t play the first title in the series. Though, I have heard great things about it. As was the previous game it’s set in the fantasy land of Meliora. However this time a dark force has fallen over the realm, known as the Umbra, and the inhabitants have turned into aggressive, hateful beings. Overall, the story is interesting and feels like a bit of a dungeon and dragons adventure. Though you don’t have a party to fight alongside you, you do have your friend Aurelius who narrates inside your head(set) and provides a lighthearted take on a world that’s otherwise dark and hateful. I will say now that Aurelius is one of my favorite things about this game. I have to give props to his voice actor, Jason Marnocha, for making him so entertaining that I’m not sure what the game would’ve felt like without him. 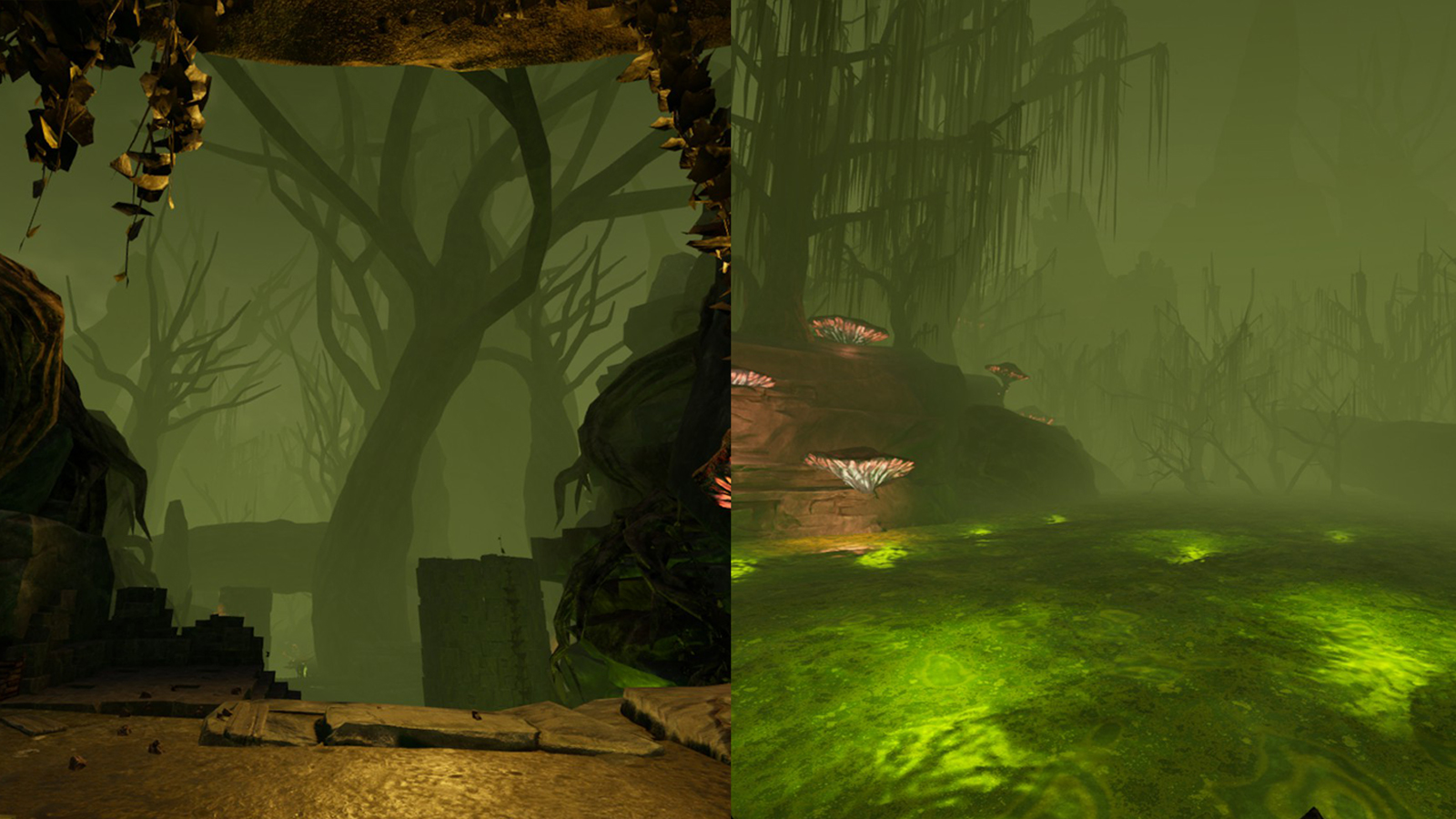 Meliora just has a certain charm to it in VRNow, the gameplay is fantastic. Never has a fantasy game made me feel like I was in complete control of my surroundings. You’re given 11 spells to unlock, each with their own ability to affect the outcome on the battlefield. I won’t spoil what they are since they’re all incredibly fun to experience the first time around. At first, you’ll only have access to the fireball and arcane shield spells, and while that’s pretty great at the start, eventually you’ll come to unlock some of the bigger guns in your arsenal. You’ll acquire a bow and arrow with freezing capabilities, which can then be evolved into dual swords that will instantly freeze anything (but bosses) upon striking them. Couple that with the force push you can also get, and you’re exploding your frozen enemies like no tomorrow. Eventually, all your spells will have primary and secondary functions (the latter being more powerful), and they’re just insanely fun to mess with. 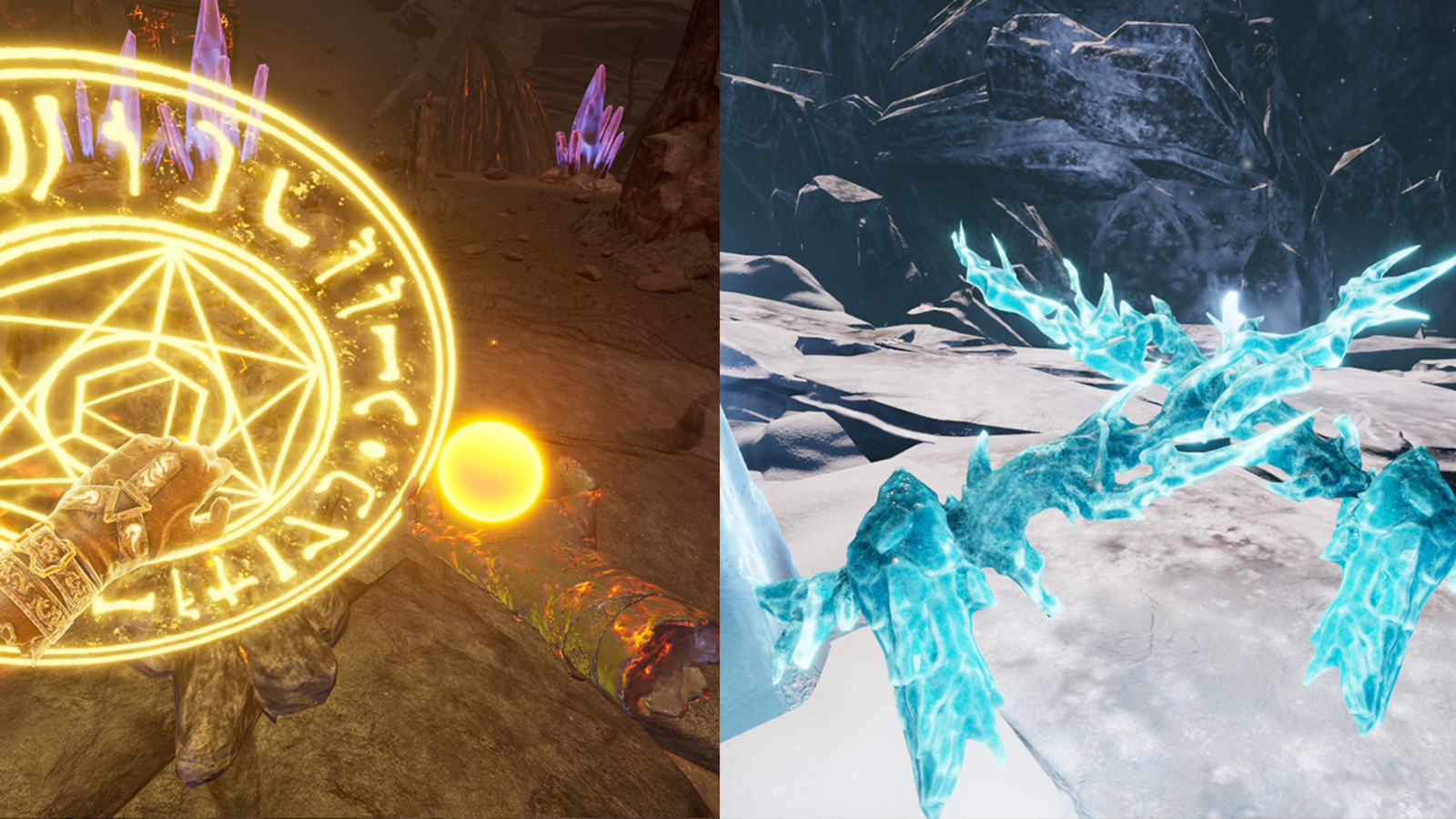 Pictured: Left side – Arcane Shield on the left hand, Fireball on the right hand. Right side – Dual Ice Swords

Though, at first, the spellcasting felt very hard to understand. It’s not entirely overwhelming since there are tutorials in the game and instructions within the pause screen to ensure you don’t feel that way; a lot is going on nonetheless. Take the basic spells: fireball and arcane shield. Casting the fireball is just a pull of the trigger, but the arcane shield is the same action plus moving your hand to the left (if you’re using your left hand) or right (if you’re using your right hand). At first, I’d constantly create a fireball instead of forming an arcane shield, and it stagnated the gameplay. I partly blame it on being unique VR controls that I haven’t become accustomed to, and partly on the fact that some movements are very close in line with others. Eventually, I learned the nuances of those spells through repetition, but even now at least 10-15% of the time I’d accidentally create the wrong spell at the wrong time and get my butt kicked.

The spellcasting is otherwise a fantastic mechanic, and there’s plenty of attention to detail. I appreciated the ability to use the force push to blow out campfires and torches, or otherwise using it to push back an arrow or bomb that’s fired at me. What I’m getting at is that essentially all of the spells can be used in a way that’s outside of the box. For example, coupling the arcane shield and freezing arrows is a recipe for devastation since you can freeze your enemies then throw a shield that hones in on them and explodes them into a million glorious pieces. Or even, put two fireballs together to create the magma burst spell, and send your enemies into the air, then force push them into the wall or off a cliff. As I said before, you’re in complete control of the battlefield if you know what you’re doing, and there’s plenty of unique moments in the gameplay to constantly keep you hooked.

The Magma Burst spell in action

You’d imagine that a fantasy game that’s heavy on magic and spell casting would have a mana system or potion creating at the very least, right? Well, not this one, and this part is more about taste than anything else so take what I say with a grain of salt. I found it was a clever and necessary decision to remove both those systems. I know I know, throw those tomatoes at me. But, if anything those systems would only encumber the player, and spellcasting is full-on as it is anyway. The last thing I’d like to be doing is worrying that I’ve used all my mana up at the beginning of a fight and have to just run and hide until it’s full again, or that I didn’t bring enough health potions to a battle and now there’s no way I can win. I think that was a good decision and allows the player to focus on the spellcasting and gameplay as a whole, and have an overall fun experience with the title rather than getting bogged down in the details of what a fantasy game usually utilises. And for that reason, I enjoyed every minute of every fight and encounter I had in this game.

I will say, I’ve fallen in love with the environment design. Take the hub, the place you’ll spawn into at the start of returning playthroughs, and where you’ll go once you go through a checkpoint portal. This place is beautiful; there’s a goblin sitting high above playing music, and a witch brewing some concoction in a cauldron. You can relax here, tankard in hand, and take the moment in, right before you venture out and slay your enemies. And for the areas where you’ll have your encounters or the areas where you’ll be exploring, you can tell the art team has put in a lot of detail in them. And without a doubt, they have done a stunning job. Every. Single. Area. Was immersive and a treat for the eyes. I don’t know how long I spent in places like the hub just admiring it and taking it all in. This is so important for VR titles, especially fantasy ones because slapping a few textures and polygons together and creating generic levels just won’t appeal to VR players (like me) who have had access to the platform for years. So, hats off to the developer Carbon Studio for their attention to detail. 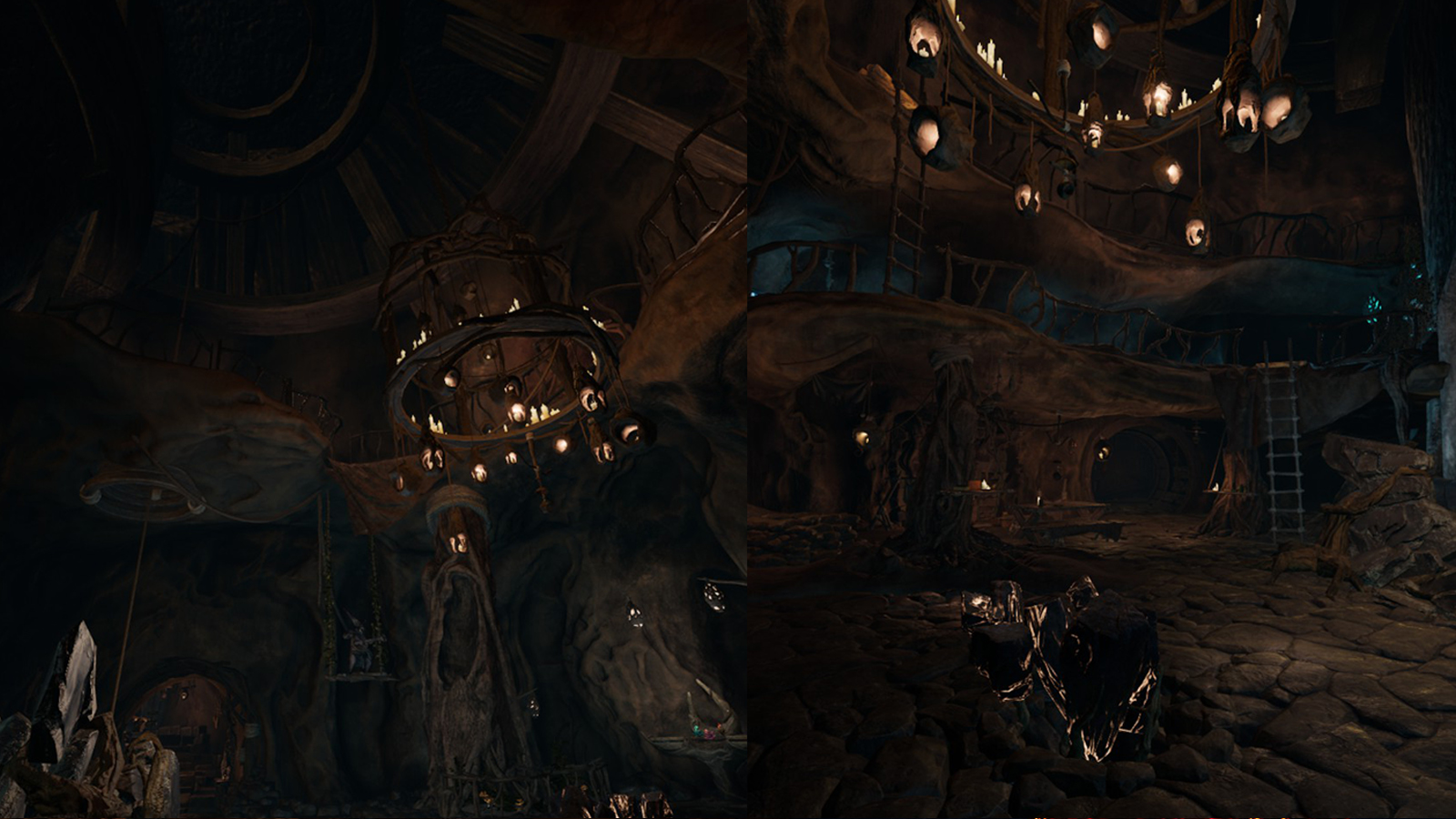 I love everything about this place

But, let’s get to comfort. In general, the gameplay is perfect for all types of players. There are two types of movement, either locomotion or teleportation, and you can set it to either one or both. I used both only because sometimes I’d get caught on an edge and teleporting out was the only way out (I’ll get to this a little later). There’s snap turning, and you can input the degrees of each turn to suit your liking. There’s also vignetting so you don’t get motion sickness, and major support for lefties (abilities are typically ambidextrous, but you can set the primary and secondary hand used to cast the bigger and badder spells). There are subtitles as well, but if you don’t require them then I implore you not to since they take up a big part of the screen and are generally interruptive (I learned that a little too late). 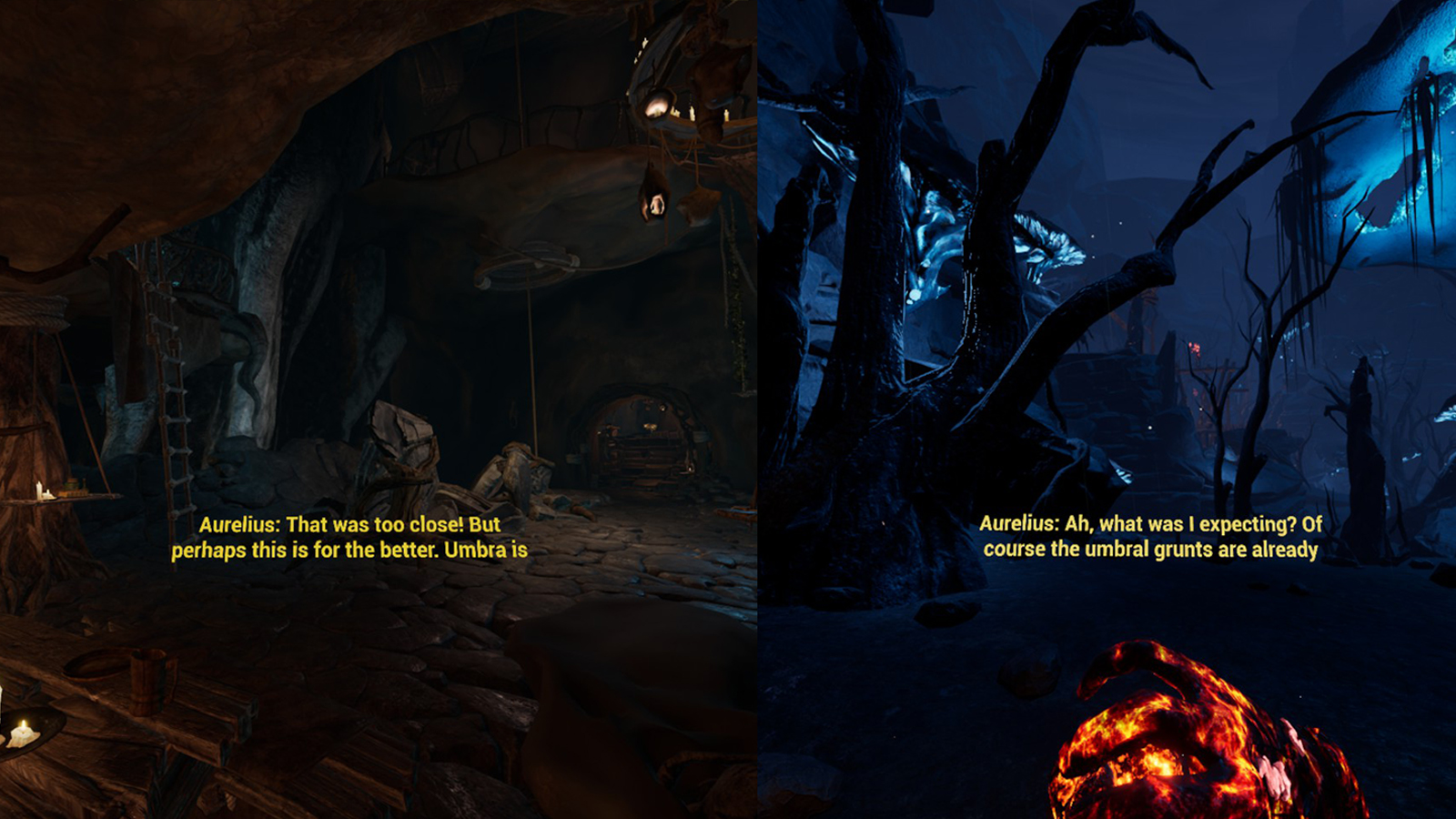 In VR, these subtitles can be a bit irritating

As for the glitches and other grievances, I didn’t find/have too many. I’ve already said my part about the spellcasting being a bit wonky at times so I won’t go there. As I’ve said a few sentences before I did have an issue with some of the movement in this game. Namely, there’s no freedom of movement; by that I mean you can’t just fall off an edge to get to a lower platform. Unless there was a rope to climb down, you would have to find another way down. I mean, sure you can teleport down, but VR titles are all about freedom no matter what motion settings you’re locked into. Also, a common issue I had was clipping on the edge and getting stuck, and the only way out was to either wiggle out or teleport out. Again, annoying, but solvable. I also found it a bit disappointing that there was only a set amount of things to interact with. I could grab a knife off the table, but I couldn’t flip it around in my hand or use it in combat. I could grab a tankard off the table, but I couldn’t fill it with anything. Those objects felt more like set pieces, and that doesn’t always fit into a VR game, which had the effect of reminding me that I was playing a game. I know, it’s small, but they eventually add up, since as you progress through each level there’s a very finite amount of things that are interactable or moveable, and a small portion of those impact the story. At times I felt like I was playing a VR game with a console controller since I could barely interact with my surroundings.

Overall, this game was a blast. It’s decently priced and provides enough hours of entertainment to scratch that VR fantasy itch. The spellcasting was superb and allowed for so many great moments and experiences. Being able to take control of the battlefield with the unique arsenal of spells is one of the most rewarding things about this game. While I do have grievances with the game, like barely being able to interact and affect any of the surroundings, the experience I had with this one made up for it.

The Wizards - Dark Times is great. It’s absolutely a must-have if you’re interested in VR spellcasting using only hand movements, and generally want to feel like a wizard. While there are some minor grievances with the gameplay, they pale in comparison to the level of fun and enjoyment you’ll get out of this one.

With a deep interest in writing, Ben followed that into a Journalism degree. As an avid lover for gaming, he is constantly expanding his library with console, PC, and VR games. He's obsessed with stealth games and loves hunting down the smallest of details inserted by devs.
Related Articles: The Wizard - Dark Times, VR
Share
Tweet
Share
Submit