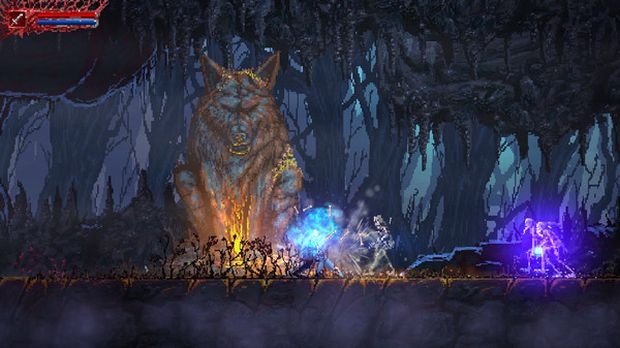 Castlevania is a series that’s undergone many changes over the years. While the series has roots as a relatively straightforward action platformer, it’s today commonly associated with the sprawling open-ended levels, leading to the phrase “Metroidvania,” and most games that claim to be “inspired” by the series have more in common with Symphony of the Night than any of its immediate predecessors. Slain: Back from Hell, while not an official Castlevania game, has so much in common with the original NES and SNES titles that it feels like the closest thing the series has had to a remake.  While some might take issue with the large amount of content that feels almost copy-pasted from the original games, Slain has enough original ideas to at least stand out in the modern era.

Slain: Back from Hell is an action platformer that’s deliberately retro in every way.  Most of the time you’re going to be jumping, attacking, and blocking attacks in a combat system that almost reminded me of Dark Souls, but simplified for two dimensions.  Overall, it controls well and feels responsive, though deflecting attacks, a necessary strategy for completing the game, requires timing a little too precise to be consistently replicated.

The game’s difficulty is another callback to the retro era..  Checkpoints are few and far between, and there are plenty of instant death traps, though they’re all pretty easy to see coming.  While most of the difficulty feels fair, there are a few moments when it seems checkpoints are withheld just to artificially lengthen the game.  For example, a tough platforming section followed by a mini-boss fight is already difficult enough without more enemies to fight afterwards.  One particularly frustrating moment came right after I encountered a new enemy type, whose attacks required a lot of skill to dodge.  When I finally beat it, I was transported to another area, into a cutscene, and then forced to fight two more of the same enemy in a particularly claustrophobic space with no chance to heal between fights.  Dying meant going through the same fight, the same cutscene, and then a more difficult version of a fight I’d already done.

Another major criticism I have of Slain is that, at times, its similarities to Castlevania cross over from homage to plagiarism.  Certain enemies are very similar not only visually but in terms of AI.  There are Medusa heads and skeletons along with other recognizable enemies.  Some of the levels even feel similar, to the point where the game almost feels like one of those “haunted” ROM-hacks you see on the internet, where a classic game gets coated in an extra level of gore but otherwise remains largely the same.

Visually, though, Slain looks great.  The artstyle mimics the Super Nintendo, though with surprisingly fluid animation for a pixel art game. The backgrounds are nice, mimicking the style of over-the-top heavy metal album covers. Enemy designs are similarly styled, and that aesthetic mixed with an incredible amount of gore makes the game stand out against other pixelated platformers. The soundtrack is also a highlight of the game, with plenty of awesome guitar riffs that underscore the mood perfectly.  Overall, the visuals and sound do a much better job of selling the experience than the story, which manages to be both confusing and completely unmemorable.  Who the player character is, what they’re doing, and why are pretty much never brought up in the game proper.  While a complex plot isn’t what most people look for in a retro action platformer, there are still quite a few story sections in the game that don’t really serve any purpose rather than break the flow of gameplay.

Slain: Back from Hell

Slain is a fun retro platformer with a slick combat system, great visuals, and a killer soundtrack. While its difficulty feels unfair at times and the Castlevania-inspired levels and enemies may be a little too close to the source material for it to feel totally original, it’s still a blast to play.

Christian DeCoster is a freelance writer and indie developer. Before writing at Gaming Trend, he wrote for GameSkinny. Enjoys horror movies good and bad, as well as Southern Bastards, the best comic no one's reading, and weird indie games.
Related Articles: Slain: Back from Hell
Share
Tweet
Share
Submit