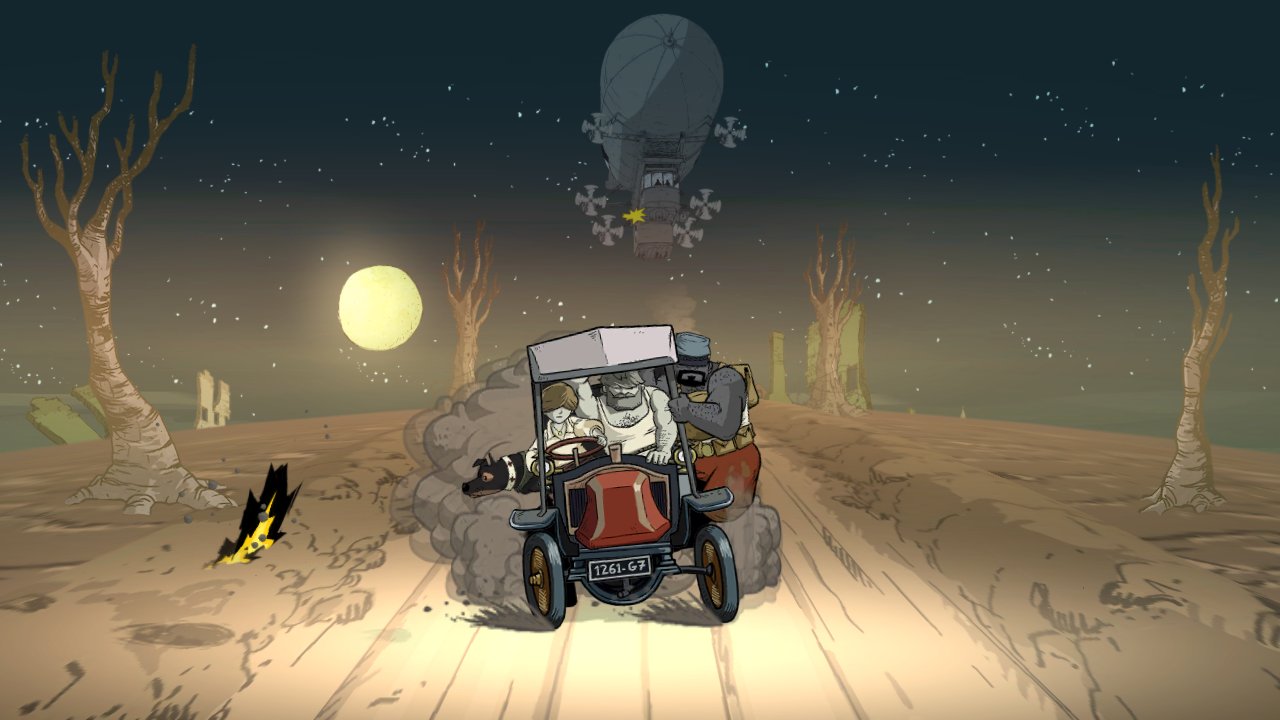 World War I is often shied away from in video games. Battlefield 1 took a swing at it, but often the grisly violence, imprecise weaponry, and slow-moving trench warfare of the Great War lends itself poorly to the fast-paced power fantasy of popular war video games. Valiant Hearts is not only set during the First World War, but also eschews the gameplay issue by refocusing on the individual stories of foot soldiers and the toll of the war on ordinary people. It is has no spectacle but for the grave and grim realities of war that took the lives of nearly 40 million people. It does not shy away from painting a difficult and brutal picture of World War I.

The narrative focuses primarily on a single French family in the town of Saint Mihiel as they are forced into this conflict and struggle to be reunited after being thrust into battle after battle. The family’s patriarch, Emile, is conscripted into the French army shortly after his son-in-law is forced into the German army. They are put on opposite sides of a conflict that neither of them are interested in, and both simply want to return to their daughter and wife respectively.

Valiant Hearts is a side-scrolling adventure/puzzle game. It is all done in Ubisoft’s impressive and underutilized UbiArt engine that allows the game to be entirely hand drawn. It’s the engine that gave us Child of Light and Rayman Origins, so it affords a lot of flexibility in how the designers want to express the world. It pays off in this case; all of the characters are drawn with an individual flair and have eminently expressive mannerisms. Most of the story is told through diary entries and narration relegating the characters in-game to short bursts of speech and emoticons to convey their mood. It is done effectively, and by not having the characters do much actual spoken dialogue it amplifies the style of the game perfectly.

Instead of being the bombastic, spectacle-laden showpiece of war that something like Battlefield 1 attempted, it relies more on informative historical context to be something more akin to a war documentary. Each area comes with a quick blurb about a different aspect of the war, like the value of dogs in the war (which I’ll get into in a bit), the particulars of specific battles or broader changes in the war at a certain time. The character’s personal stories then serve more as a framing device for the overall conflict. The narrator will describe a gruesome battle and then we’ll get to see the battle from the perspective of Emile or his American friend, Freddie. They build off of each other brilliantly by expanding and elevating one another. The more educational aspect is emboldened by placing the player in the shoes of the fictional Emile or his son-in-law Karl, while the stirring narrative is made more tragic by getting the broader context of the war.

Late in the game there is a battle that was such a bloodbath that if the narrator didn’t explain the sheer volume of the dead, the visual of Emile clambering over piles of fallen soldiers would have seemed almost absurd, but instead highlights the truly grim and unnatural force the war was. The individual character motivations can sometimes be less interesting; you spend much of the game chasing after the fictional Baron von Dorf. He is mostly effective at giving the character a reason to move forward but is not a well-explored character and instead comes across as a mustache twirling cartoon villain with little depth.

The narrative is generally well done. The player gets to read sporadic diary entries where we see the fear and frustration of not knowing if a loved one is alive or dead. I do wish Valiant Hearts had done more to examine the psychological effects of the war on the soldiers. It absolutely touches on it—and quite effectively at times—but its impact on the story is light, and more often your character silently trudges forward, making no mention of the horrors on display. For how impacting the overall experience can be, it is ultimately a minor complaint. Being grossly under-informed on all things World War I, Valiant Hearts does an admirable job telling a gripping story while also being highly informative.

That all aside, the moment-to-moment gameplay usually involves exploring a 2D environment and solving simple puzzles to find the object you need to move on. The solution is generally fairly obvious and only requires you to explore one or two place to find what is gating your progress. It tends to only ever get more complicated when it asks you to find a series of different items to move on. You need to get the tire to leave town, but you need a different uniform, but you need a different item to get the uniform, etc. The puzzles were never overly challenging, but that was fine. It was an inherently worthwhile experience to explore these areas and simply collect the various pieces of war memorabilia and paraphernalia that are all accompanied by interesting descriptions. The puzzles were always just challenging enough to make you explore, but never difficult enough to keep you stuck in one place for too long.

The puzzles are occasionally broken up by more action-oriented gameplay segments that are less consistently interesting. You might play as the field medic, Anna, where you are tasked with speeding along a road dodging obstacles or tossing grenades at enemy vehicles. There is a boss fight against a zeppelin that feels especially out of place. Some of these alternate gameplay segments can be more interesting; you might have to stealth your way past the guards of a POW camp or aim a cannon at a distant enemy encampment. The variety of the gameplay is generally valuable for the telling its particular story, but some of the more video game-y moments only serve to distract from what Valiant Hearts is doing as a whole.

There were some smart Switch-specific additions made for this release, especially if you’re playing in handheld mode. While I’d highly suggest you play the game in a way that lets you experience the excellent and understated soundtrack, handheld mode lets you play entirely on the touchscreen. I found it to be mostly needless as I much preferred the standard controller, but it is nice as an option. It is mostly nice to simply be able to play the game anywhere. I played a good portion of the game in bed with headphones in, and the art pops sharply on the smaller screen.

This version of the game also adds a short animated side story focusing on the most important character, Walt, the dog of war that you befriend early on. The side story does not add any more gameplay, but rather a short and surprisingly compelling story about how your canine compatriot found his way to the battlefield. It also adds some more crucial context to the importance these animals played in the war and the dangerous missions that were entrusted to them.

Valiant Hearts does plenty that is not new or inventive. It is a fairly rudimentary 2D puzzle/adventure game at its core, but the way that it delivers its narrative alongside its more informative and historical context seemingly puts it in a completely different genre of video game storytelling. By not solely relying on one aspect or the other to do all of the heavy lifting, it builds a game unlike any other. It does all of this by tackling a subject matter that is vastly underrepresented in video games with a grace and tact that should be applauded.

Instead of simply running you through various battles of World War I, Valiant Hearts: The Great War uses the story of a French family to build a better understanding of the broader historical importance. This personal story serves as the perfect framing device for the game’s documentary-style presentation. While there are a few missteps and areas where it could have been stronger, it is a beautiful and well-executed game that offers a unique glimpse into one of the deadliest wars in human history.

Nathan lives in Colorado catching Pokemon on the Go and at home. He previously spent three months interning for Game Informer before coming back to Gaming Trend to spread the good word on video games. His real passion, though, is collecting different versions of the 3DS and other weird Nintendo garbage. It's a never-ending quest for less space in his house.
Related Articles: Valiant Hearts: The Great War
Share
Tweet
Share
Submit