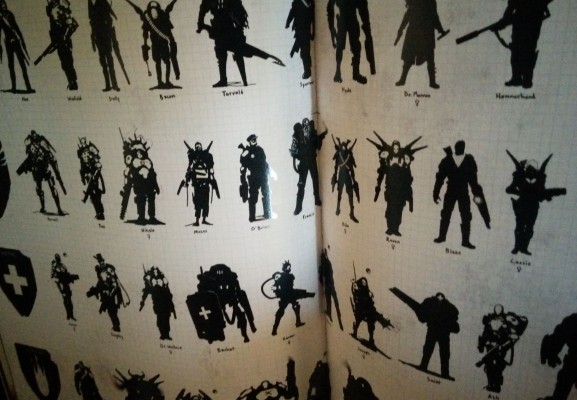 Evolve is, arguably, the spiritual successor to the mega-hit Left 4 Dead series.  Developer Turtle Rock Studios created an entire world called Shear, as well as a massive backstory full of soldiers, monsters, and massive Kaiju-like beasts.  The asymmetric 4v1 monster hunter did pretty well in our review, but you know me — I’m a sucker for how all of these titles are made.  When I picked up The Art of Evolve from Insight Editions, I got to see a unique side to this brand-new IP, as well as a few hints for what it could have been.  Let’s head to Shear and get a closer look.

The first thing you’ll notice about this hardbound book is its Kaiju size, coming in at 191 pages.  This is somewhat surprising, given that the story of Evolve is fairly surface-level.  As I turn through the pages of incredible artwork, and read the introduction by Phil Robb and Chris Ashton, two of the three co-founders of Turtle Rock Studios, I have to wonder if there is a lot more to Evolve than what was shipped to shelves.

So may characters, presented in silhouette

The book is split across 6 chapters, but don’t skip that aforementioned introduction.  Robb and Ashton mentioned that they expected their concept art to take just six months to a year, but in fact went on for two additional years and all the way through the production cycle.  The reason was simple, but difficult to overcome; they needed to create an entirely new world — a marked departure from their more realistic previous works.

The Art of Evolve kicks off with the part that interests me the most — pre-production.  The artwork here served as the groundwork for what would eventually become the primary concepts for Evolve.  Amazingly, even these early sketches showed exactly how close the initial concept and final design really were.  These initial sketches were fantastic amalgamations of crab like creatures, insects, and hulking primates, already showing the three-stage evolution process in action.  The formative work at this stage is still chokingly detailed, showing powers that made it all the way across the finish line to the retail launch.

One of my favorite pieces – so expressive.

With the beasts fairly well-defined, the team moved on to the daunting task of creating a world for these creatures to inhabit.  Chapter 2 is dedicated to the savage frontier of Shear.  Every aspect of every biome is rendered to a staggering level of detail.  Every plant, rock formation, and outcropping received more love and attention than most gamers will ever realize.

If you are unsure of where you stand…you are the sheep.

Chapter 3 focuses on lunch — the fauna of the world of Shear.  The team at Turtle Rock needed to create creatures that would be for the most part, a delicious snack for the monsters to hunt and eat.  Those same creatures would still be incredibly dangerous and hazardous to the humans hunting the monsters.  With only those two larger guiding principles in mind, the concept team went absolutely crazy.  Creatures that look like armored frogs, large barnacle-covered strider creatures, and strange hook-handed beasts became the vicious fauna that would inhabit this world.  Page after page of beasts large and small are concepted out, with most of them being realized into the full product.

If you’ve played Left 4 Dead you immediately recognized the archetypes presented as the Hunters in Evolve.  They are four soldiers from very different walks of life, all larger than life but somehow relatable.  Pages 92 and 93 are eye-opening and speak volumes to the cosmetic DLC approach the team has taken to their product.  Each of the four classes have a staggering 12 variants, most of them vastly different than the two flanking.  These inkblot-style sketches are the perfect introduction to the remainder of this chapter — the concepts and backgrounds that would become Markov, Hyde, Val, Parnell, Lazarus, Caira, Hank, Bucket, Cabot, Maggie, Griffin, Abe, and the incredible deluge of weapons that each of them can wield.  Each character’s full evolution into their final forms are represented here, showing alternate ideas such as a female Markov that would have been named Nikola sporting a 60’s style exosuit.  Bucket, one of my personal favorite characters, gets four full pages of attention.

The stuff of nightmares!

The fifth chapter in the book shows off one of the earliest concepts for the world of Shear.  The team wanted the world to look like everything in it was either cobbled together junk, repurposed, and semi-mixed with a frontier style flair.  The shanty settlements, larger towns, vehicles, and exosuits are all shown in great detail.

The final chapter of the book literally saves the best for last — the monsters.  Pencil sketches give way to concept vertical slices, pushing to near-final concept sculptures.  These concepts also show power use, suggestions of movement models, as well as alternate looks for a great many of the final creatures.  The final form of the Kraken looks like a creature from Cthulhu mythos, but early concept art is downright Nyarlathotep.  The Wraith went through several iterations as well, all illustrations laid bare for us to see.

There is only one hitch you might have with The Art of Evolve — the price.  The MSRP marked on the book is $45, though I have seen it on sale for $29.99 at the time of this writing. while the price may seem stiff, I can’t express the amount of quality work detailed here.  If you are interested in how an idea evolves into a final product, it’s shown here in every detail you could want to see.

The Art of Evolve

Put simply, this book reveals more about Evolve than we could have ever surmised from the making-of videos or the game itself. It opens a window into the deeply-ambitious concepts that would eventually become Evolve that few art books ever show. From the earliest concepts through to the physical manifestations of the incredible monsters, The Art of Evolve has it all. If you are a fan of this fledgling franchise, you need this book. It is eye opening and worth every penny.

Ron Burke is the Editor in Chief for Gaming Trend. Currently living in Fort Worth, Texas, Ron is an old-school gamer who enjoys CRPGs, action/adventure, platformers, music games, and has recently gotten into tabletop gaming. Ron is also a fourth degree black belt, with a Master's rank in Matsumura Seito Shōrin-ryū, Moo Duk Kwan Tang Soo Do, Universal Tang Soo Do Alliance, and International Tang Soo Do Federation. He also holds ranks in several other styles in his search to be a well-rounded fighter. Ron has been married to Gaming Trend Editor, Laura Burke, for 21 years. They have three dogs - Pazuzu (Irish Terrier), Atë, and Calliope (both Australian Kelpie/Pit Bull mixes).
Related Articles: The Art of Evolve
Share
Tweet
Share
Submit