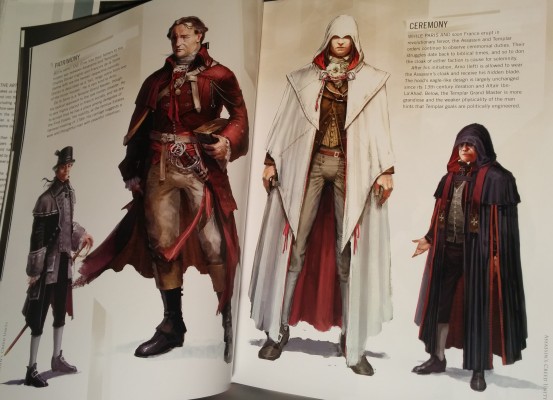 This is how it’s done.

There are art books that I’ve checked out in the past that give you the journey from inception to release, but others that seem to focus almost exclusively on the final product. The latter makes for a far more compelling look behind the scenes, the slick veneer of rendered artwork replaced by amazing watercolors and pencil sketches. When people point to games transcending their medium and revealing the incredible art underneath, it’s books like this that showcase it.

The Art of Assassin’s Creed Unity is forwarded by Mohamed Gambouz, the Artistic Director for the game. His credits are extensive, working on some of the best games ever to grace our libraries. TItles like Prince of Persia: Sands of Time, Tom Clancy’s Splinter Cell: Pandora Tomorrow, Beyond Good & Evil, as well as Assassin’s Creed I and II, Brotherhood, and now Unity are just a small portion of his extensive work. He speaks of wanting to achieve a “richness” with the art in Unity, and this book showcases the road he and his team strode over four years to achieve exactly that.

I’m not going to split hairs – Unity’s launch was more than a little rocky. That said, nobody can deny that this game is absolutely gorgeous. Regardless of any technical hurdles the team is still tackling, including framerate and pop-in, the team took their dreams and designs and poured them into their in-house Anvil Next engine to make something beautiful. The word “textures” doesn’t just apply to the skin-over-skeleton mechanics of making something look beautiful, but also the “richness” that Gambouz and his team achieved. Old world France looks and feels gritty, opulent, bourgeois, dirty, and filled to bursting with some of the most amazing landmarks that still stand today. Four years of development time is readily apparent here.

After the forward the book opens with an in-depth look at Arno Dorian, the protagonist in Unity. From his youth to his well-armed and well-dressed confidence, Arno’s artwork portrays a man that has risen above his circumstances – a character with an inferred depth we didn’t necessarily see come across in the narrative.

With a heavier focus on customization and personalization, the book follows the game, showcasing a great many concept drawings for Arno’s various looks. Filthy pirate, doubleted noble, military commander, freedom fighter, and even tricolore-bearing patriot are all represented here. It showcases all of the ways Arno can blend into any crowd through the power of deception and disguise.

As the game progresses you’ll eventually unlock the Café Theatre, Arno’s home base that can be upgraded and rebuilt, not unlike the Tuscan village Monteriggioni in Assassin’s Creed II. Looking at the artwork, I can immediately visualize the in-game render as it’s a nearly 1:1 representation. Every detail is meticulously showcased. Chairs, the spiral staircase, the solarium, and armor stands open a window into the process the team used to showcase some of the highlights in the Café.

Chapter two focuses on Allies and Enemies, though some of the characters in this game are easily both. From Élise de la Serre to Donatien Alphonse François de Sade (better known as the Marquis de Sade), friends and foes are shown in their full-page glory. Even in previous Titan books there hasn’t been this level of detail shown — it’s greatly appreciated and raises the bar. Also for the first time we get to see the artwork used in the fantastic Unity companion app. Remko Troost’s work on the members of the Brotherhood you can recruit bring to life an essential element of the game that might have gone overlooked in an art collection.

The next few chapters of the book focus on the tragic veneer that serve as the underpinnings of Paris proper. Majestic buildings thrust deep into the sky while revolution burns below. The guillotine and gendarme (French army infantry) juxtaposed against the majestic holy spires of the Cathédrale Notre Dame de Paris reveals the struggle between the powerful and those without. There is no denying that this era was a period of stark beauty and abject terror.

In the center section of the book are a dozen or so pages devoted to Anomalies. If you have not completed the game, I suggest you skip these sections entirely. They reveal some major plot twists and turns that are better experienced unspoiled.

The Art of Assassin’s Creed Unity closes in a place far less savory – the catacombs. Filled with the bones of the dead, this popular modern tourist attraction once served as the seedy underbelly of Paris. While the game doesn’t feature the full extent of the ossuary, they did enough to capture the grotesquery of the destination. This maze would be an incredible, albeit somewhat unhinging, destination to see in ones life.

There is only one thing missing from this book, and it’s a surprising omission — cooperative play. The missive put in front of the team was to create the first cooperative multiplayer game, able to bringing four players together to tackle missions in any way they saw fit. This mechanic works beautifully in the game, but somehow it is not showcased in this book. Either there were not concept pieces for this system of play, or it was simply cut. Either way, it is sorely missed.

The Art of Assassin's Creed Unity

After a somewhat disappointing outing with The Art of Watch Dogs, I am blown away by how fantastic The Art of Assassin’s Creed Unity is from cover to cover. This 192 page art book is a must-have for any fan of the series, or an aspiring artist of any kind. It raises the bar for videogame art books, and presents a window into the gorgeous visuals brought to life in this beautiful, albeit tumultuous, title.

Ron Burke is the Editor in Chief for Gaming Trend. Currently living in Fort Worth, Texas, Ron is an old-school gamer who enjoys CRPGs, action/adventure, platformers, music games, and has recently gotten into tabletop gaming. Ron is also a fourth degree black belt, with a Master's rank in Matsumura Seito Shōrin-ryū, Moo Duk Kwan Tang Soo Do, Universal Tang Soo Do Alliance, and International Tang Soo Do Federation. He also holds ranks in several other styles in his search to be a well-rounded fighter. Ron has been married to Gaming Trend Editor, Laura Burke, for 21 years. They have three dogs - Pazuzu (Irish Terrier), Atë, and Calliope (both Australian Kelpie/Pit Bull mixes).
Related Articles: The Art of Assassin's Creed Unity
Share
Tweet
Share
Submit