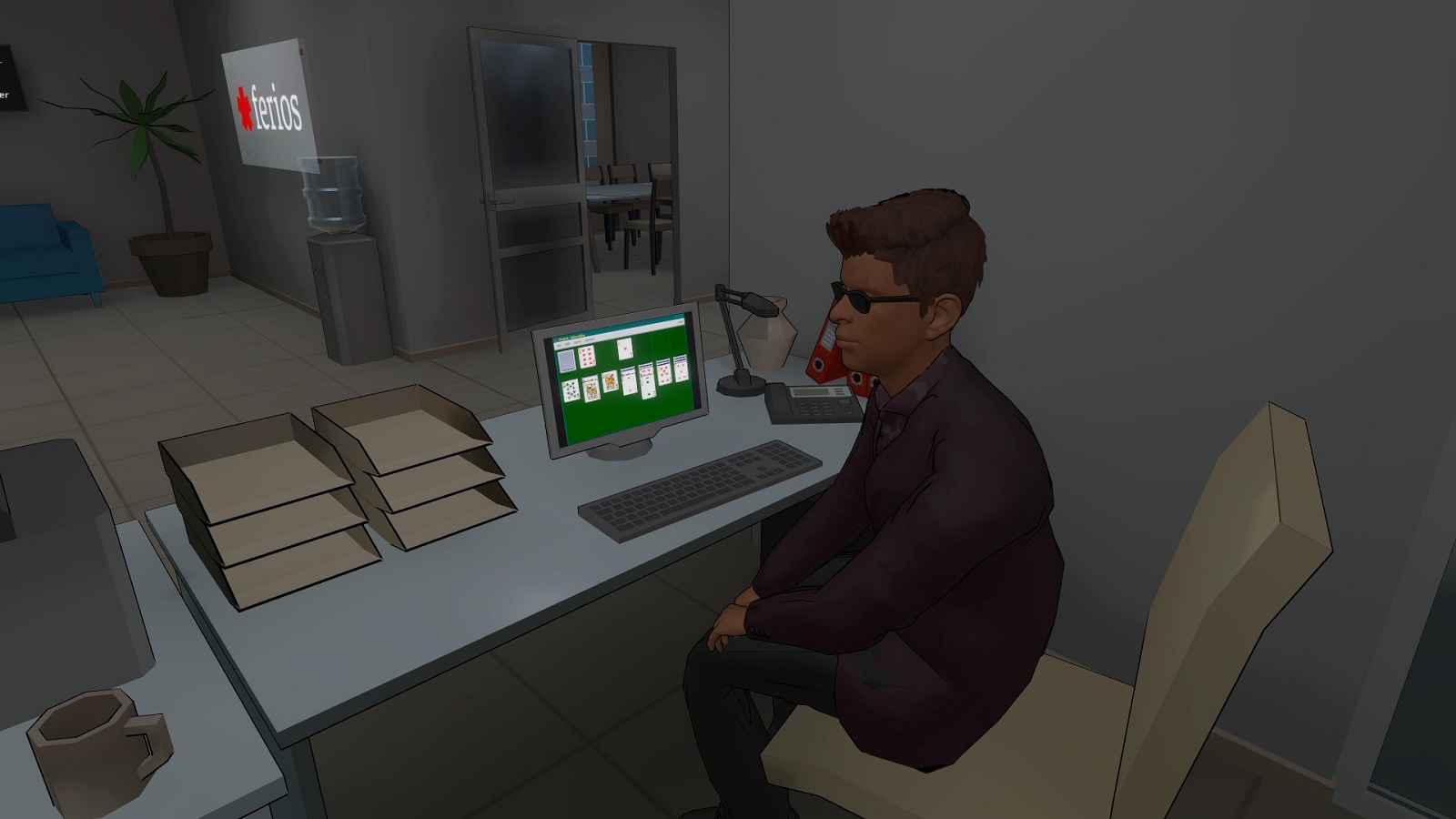 As hard as you may try to keep the stock market on the periphery of your life, modern-day capitalist society will thwart your futile attempts at every turn. Between the ever-growing obsessions with entrepreneurship, a pandemic cleaving away at employment numbers, and the unavoidable buzz surrounding meme stocks, cryptocurrencies, NFTs, plus whatever other “golden geese” are hiding around the corner, there are more eyes on investing than there’s probably ever been. In comes The Invisible Hand, a satirical take on stocks that forces players to reckon with the destruction they’ve unknowingly unleashed in their blind pursuit of the next big money-maker. Big laughs and absurd outcomes are present in spades, even if its commentary struggles to stay afloat. Regardless, stepping into the full-grain leather shoes of a big-time stockbroker manipulating a volatile, virtual market is just as fun as it sounds on paper.

The Invisible Hand is perfect for someone like me, that is, someone who knows the bare minimum. I had a good time on my tour of the world of Wall Street, which the game laces with a decent dose of cynicism and absurdity. It’s hard to imagine the avid investor progressing at the game’s intended pace, and properly experiencing the twists and turns of working for FERIOS Capital, but perhaps that only adds to the humor. On a recommendation, you, the Wall Street wunderkind, land a job day trading at FERIOS and quickly work your way up the ranks in a cutthroat environment. The numbers quickly fly up, as does the dopamine, but unbeknownst to you, it’s all downhill from here. 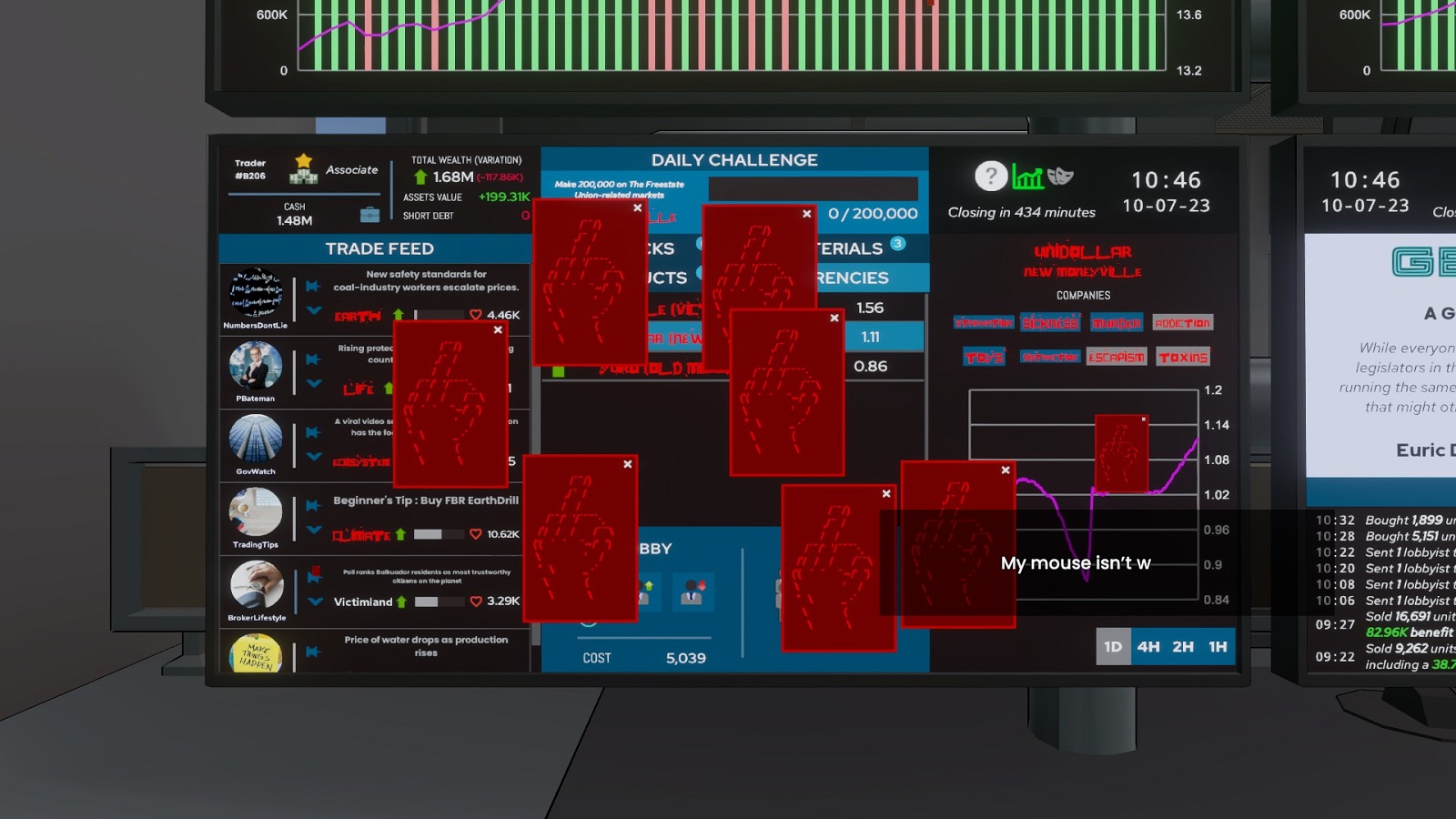 Something tells me that I’m doing something wrong.

As an entry-level analyst, your first few days go by without much of an issue. Stock-illiterate players such as myself should have no problem with getting up to speed. Sitting down in front of four monitors littered with numbers and graphs is overwhelming, to say the least. But, in a matter of minutes, you’ll be raking in the big bucks like a seasoned trader. The game introduces the tools of the trade at a steady pace, starting with long and short positions with a handful of stocks. But The Invisible Hand quickly evolves into an entirely different beast. Soon, you’ll be deep in the world of insider trading and paying lobbyists to manipulate currencies, materials, and more to bring your numbers up. As you outperform your co-workers and secure higher and higher positions in the company, you’ll be introduced to all-new problems to manage, and tricks to exploit.

In the background, news reports give you the latest on today’s hot button issues, but the numbers game is all that matters at FERIOS. Your daily evaluation caps off your workday, measuring your success against your peers, the money you’ve earned, and how well you’ve hidden your crimes against humanity from the public. Your personal funds can be put towards condos, houses, and mansions as part of a secondary real-estate game. Spending your cash on properties — including valuables to stock them with — raises their value and allows you to generate more income by renting them out. Alternatively, you can host parties for your fellow co-workers for discounts and stock tips.

The game has a way of fueling your hunger for bigger and bigger numbers. Your daily schedules are packed full of rewards and goals that keep you motivated to achieve more than you did the day before. Crashing and burning are still within the realm of possibility, but as you get more money to play with, the path of least resistance is up. It’s incredibly difficult to lose in The Invisible Hand, the generous positive feedback loops keep you on top despite the occasional blunder. You stare as the numbers increase exponentially until you’re no longer concerned with anything outside of what you can see on your four screens. The satisfaction of seeing constant, rapid growth is the game’s crowning achievement, but that quickly detaches itself from the central narrative. 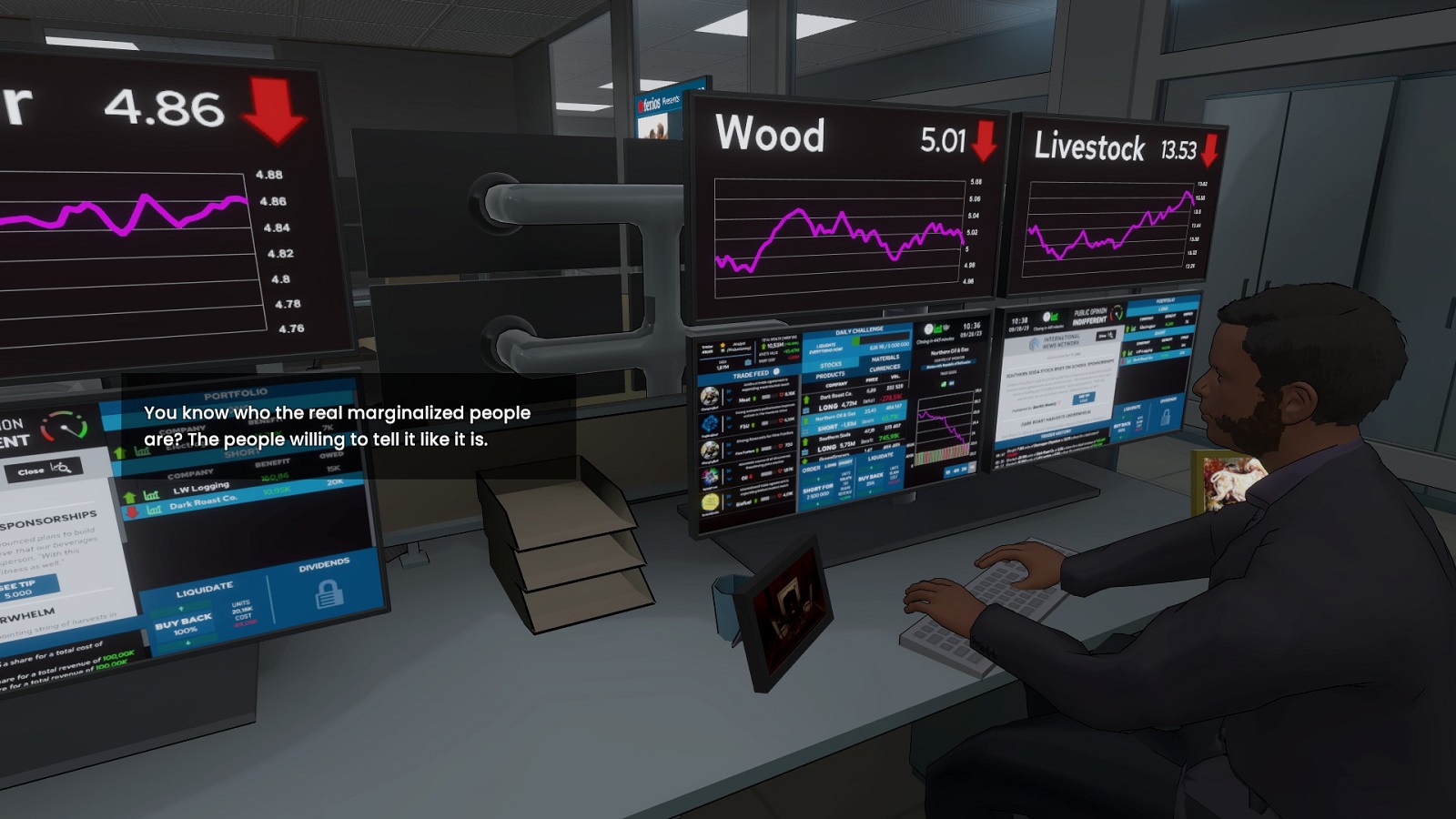 I think you’ve been staring at the numbers for too long, sir.

The Invisible Hand tries to let its mechanics do the talking, but that’s brushed aside in favor of its humorous, if not very on-the-nose, dialogue spouted from the filthy mouths of your co-workers. There’s the heartless executive, the failson who mans the front desk and spouts verbal garbage every morning like clockwork, and a host of other welcome caricatures. The game owes a lot to its writing to keep any actual satire above water; the addictive numbers game, while a blast to play, doesn’t contribute as much as one would expect inside its narrative structure. This morals-versus-money conflict that the game pitches is tepid at best, and left largely ill-explored.

Dodging the easy but underhanded, unethical methods isn’t much of a challenge at all. You can get rich fast however you choose to play. But all those decisions you make on the job do nothing to change the story’s trajectory. The key beats in the game’s linear narrative are completely eclipsed by the chaos the player creates at their desk. It’s sorely lacking real consequences beyond a verbal slap on the wrist — repercussions that actually affect how you play. I would’ve almost preferred if The Invisible Hand leaned further into the ludicrousness of its day trading components, instead of trying to bring the player back to earth with its narrative.

The Invisible Hand is better as a comedy-laden introduction to the stock market than it is a satirical exploration of stocks, greed, and capitalism. The game is witty and endearing in all the places that matter. Some stiff storytelling and lack of any true challenges hold it back from its true potential, but it’s hard to dismiss three hours of fun. The day trading system is simple, intuitive, and home to a myriad of emergent gameplay outcomes that’ll have you smiling ear to ear.

The Invisible Hand is a deceptively absurd take on the corporate circus that is Wall Street day trading. It’s at its best when it lets the player wreak havoc however they please, but in trying to juggle both stock market shenanigans and its satirical story, it fumbles on both fronts.

A self-deprecating, overly sarcastic pair of glasses that occasionally possesses a human host in order to partake in the delightful process of playing video games, then immediately complaining about them. When he is not playing games (a rare occurrence), he can be found either writing about things that no one cares about, or haunting the quiet streets of his Canadian suburb.
Related Articles: Indies, The Invisible Hand
Share
Tweet
Share
Submit