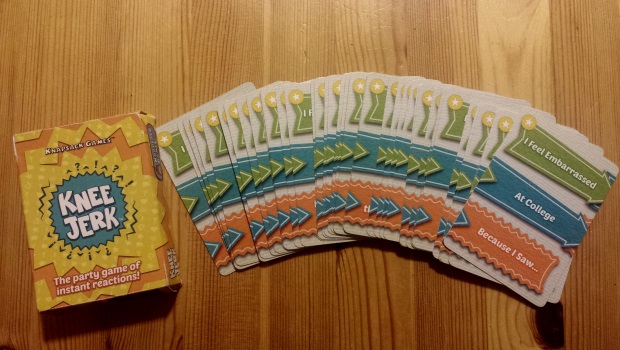 How funny are you? Are you any good at making your friends laugh? What about staying on-topic? Can you add to the subject at hand without going off on a tangent? How quickly can you react? Everyone else at the table is going to put in their two cents, and you need to make sure you are first. And how good are you at doing all of this after two or three beers? Find out in KNEE JERK, currently on Kickstarter.

KNEE JERK, designed by Andrew Federspiel and published by Knapsack Games, is a simple party game about quick reactions and big laughs. The “host” plays cards to set up a situation, in the form of an incomplete sentence. The players blurt out their punchline as quickly as possible. The first player whose answer is accepted by the host earns a point.

Like most party games, KNEE JERK has no theme, except for what emerges during play. Depending on your group and which way the wind is blowing, your theme could be “morbid humor” or “Nicolas Cage.”

My review copy of KNEE JERK is an early prototype. It consists of a deck of about 50 cards in a simple tuckbox and a rulesheet. The final copy is expected to have more cards and several sets of variant rules. The quality of the cards in my prototype is acceptable, and I’m sure the retail version will be just as good, if not better.

The rules for this game combine the voting mechanic of Apples to Apples with the reflex mechanic of games like Think Again! The first player to give an answer earns a point, unless the host rejects the answer. The rules require the host to explain why she’s rejecting an answer. When I show the game to a new group, I go the extra mile and suggest that “too obvious,” “not funny,” and “non sequitur” are common objections. The Kickstarter version of the game will include extra rules, including a traditional “voting” version, among others.

Like any party game based on open-ended answers, it all comes down to getting big laughs at the table. As the title implies, the fastest knee-jerk responses are usually the funniest. Sometimes a killer combo will come up when the host reads the cards. When the setup is “I feel like we’re in a horror film… on the airplane… because someone said these two words…” then the ONLY answer is “…m*********ing snakes!” In one game, I played the setup, “I feel awkward… in the Haunted Mansion… because I was touched by…” and I rejected every answer until I got the one I wanted, “…the ghost of Walt Disney.” Killer plays like that are surprisingly common, and I expect they will show up more often with the new and improved set of cards.

The only flaw with the game is that there aren’t that many cards, and after a few play throughs, you’ve seen them all. This is mitigated by the fact that it takes three cards to complete a setup, so the combinations are practically endless. Plus, the final version is going to have more cards than this prototype.

This is a great game for anyone who needs a filler, unless your group is of the dry and humorless variety. Some gamers just don’t enjoy party games, either because they don’t have a lot of experience improvising, or they focus on more analytical strategic games. For anyone else, this game is a winner. Even people who don’t care for quick reaction games get into it after a round or two.

Bottom line: At one of the groups I played this with, my buddies asked me not to put it away until everyone had a chance to be host at least once. At another group, a friend of mine pulled out his cellphone during the game and backed the Kickstarter right then and there. This game has such a simple, yet visceral appeal, I predict it will be very popular with anyone who likes a little silly fun at the beginning or end of their gaming session.