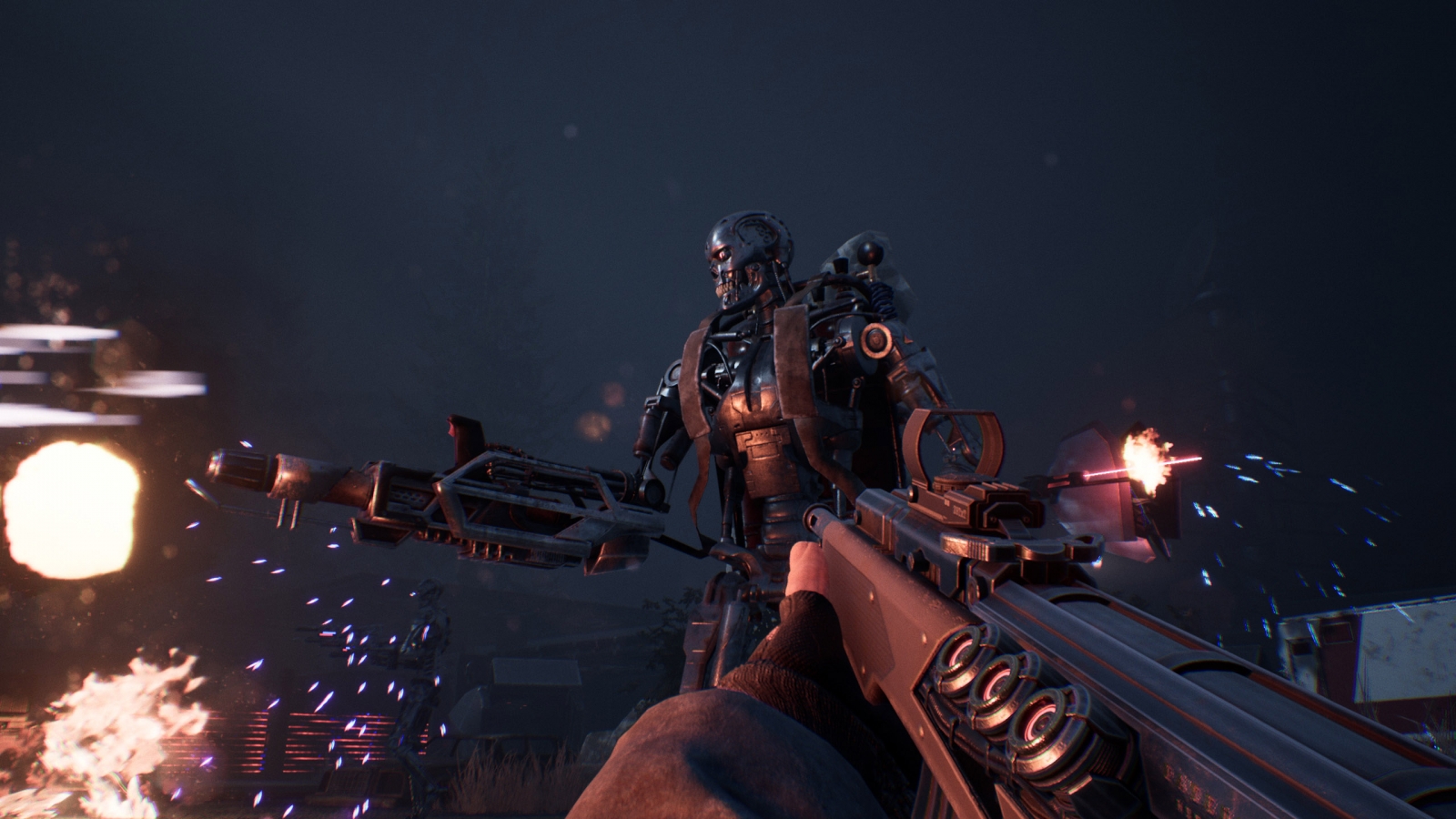 This pandemic caused my wife and I to go watch quite a few classic movies over the last two years. While I may have seen small portions of some at grandma’s house, I largely grew up without a TV, so it’s been a blast watching through the Karate Kid, Indiana Jones, and Back to the Future to understand even further the references I make. One that we haven’t started on yet is the Terminator series, not for lack of desire, but time. If only we had Time Displacement Equipment to help out…

Even with this gap in my movie watching history, I figured it’d be a lot of fun to tackle the review for Terminator: Resistance- an original story from the franchise in video game form. Given a lot of movie tie-in games tend to be just awful, I was a bit hesitant at first. But upon playing through this one I found this new take on a Skynet destroyed world fun to play, even if it can be brutally rough around the edges.

Let me expound on this. Terminator: Resistance takes place right before Skynet sends the Terminators back in time to kill key people that could stop them. You play as Private Jacob Rivers, a soldier from the Pacific Division of the Resistance, or at least the former Pacific Division, given a Terminator ripped this unit to pieces as you raced out. For some reason you’re being hunted, and by a robot killer that looks like a human, easily disguised amongst your team. Uncovering what Skynet has planned is going to be your main objective as you make your way through the US wastelands.

What ensues is a story I found largely interesting. Rivers comes across a group of scavengers and attempts to escape with them. As we prepared to leave, the leader, Ryan, asked me to see if I could find any survivors. This blew my mind; as I was expecting a largely linear experience, the game opened up a side mission for me. Something intriguing, I had the option to pass on it and just leave. This does close off the opportunity to do it later, as the narrative moves forward, but just the fact that these are here is a twist I didn’t expect.

These are also more impactful than you might expect, as doing something for someone can result in gaining trust with that person. For example, I did something for the first person I met, a girl named Jennifer, by finding a dog for her young brother Patrick. I won’t spoil anything for you, but in gaining the trust of each of these people you’ll have an opportunity to change certain outcomes later. It’s not on the level of Telltale, but it’s a good inclusion. Honestly, these stories can supersede the main narrative, with great personal storylines that connect you with this ragtag group. 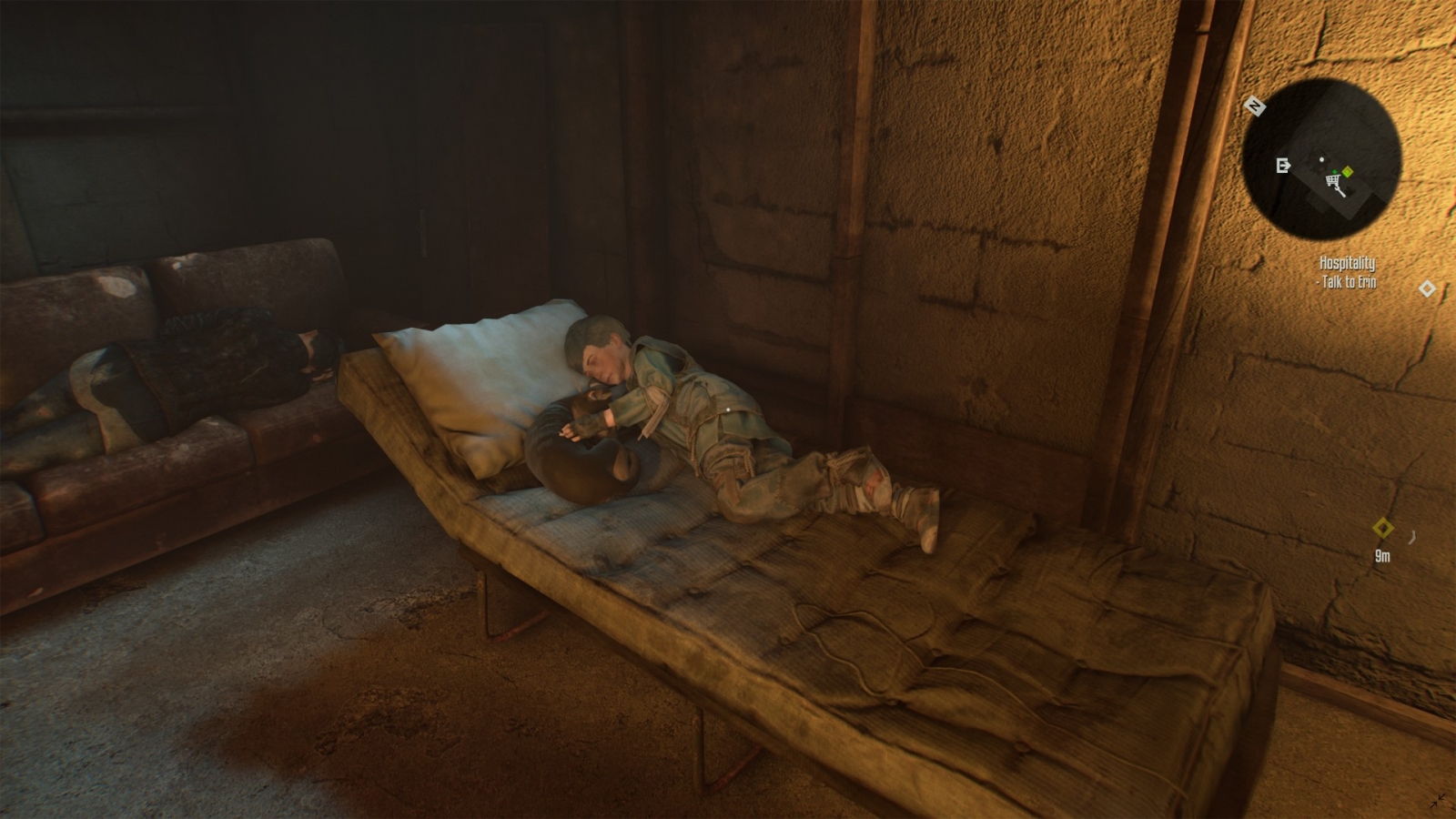 One of the areas that really shows the potential this game can have is in the dialogue. Yeah, there are moments when it doesn’t hit right, but there is a lot of emotional depth that can be found as you converse with these people who become like family to you. Listening to their stories of surviving the war with the machines endears them to you, even the crabby Dr. Erin. Towards the final missions you have a decision to make for each of these characters which will determine their survival, and the choices you make can still feel heart wrenching, even if it saves their lives.

Back to the main campaign, it’s good, but I’m not sure it’s much more than that. Your missions are largely “go here, do the thing, come back if a side mission doesn’t distract you”. This is fine, especially given most first person shooter campaigns aren’t very realized, but it feels like Terminator: Resistance aims higher than that. It’s elevated by the strength of some great story moments, along with the aforementioned strong side missions, but the lows keep it at average. There’s also some fun fan service, with John Connor obviously in play, so that’s appreciated.

So let’s make the trek into the gameplay. Starting off visually, this game looks half baked. It looks crisp mind you, but almost as if I’m playing an old game on high-end settings. I’m having a hard time placing it, but it strikes me visually as an early PS4 title, not much prettier than say Fallout 4. That really sucks, because in an apocalyptic setting the greys and browns really run together and make a game look worse than they should. The good news is that the audio sounds amazing, from the Terminators themselves down to the fire of the plasma rifles. 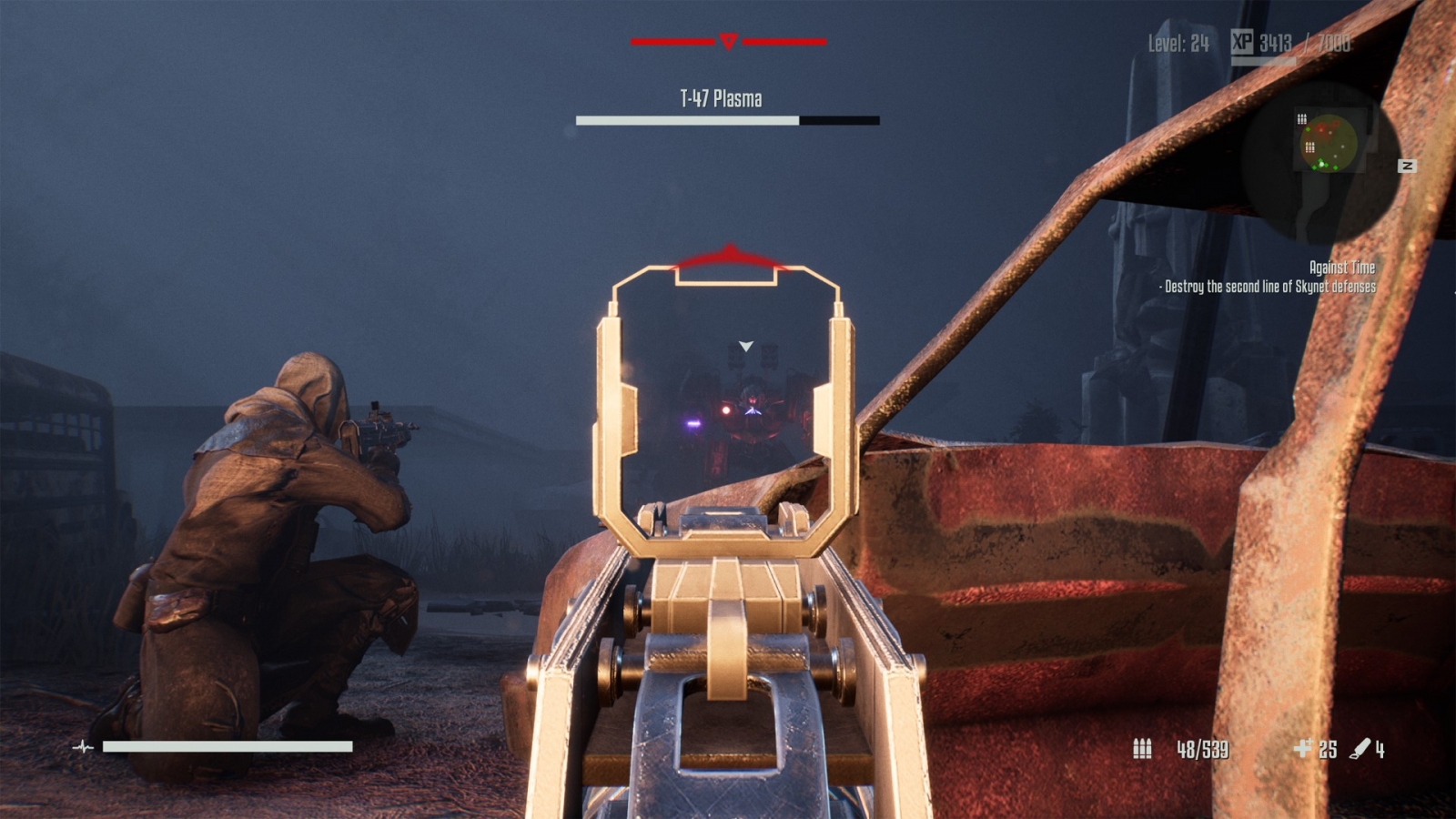 Of course, if the plasma rifle doesn’t feel good to shoot, it wouldn’t matter, and thankfully Terminator: Resistance is quite competent in this area, if a bit uninspired in design. All of the guns are enjoyable enough to use, although when you get ahold of the plasma rifles you pretty much switch over. This also opens up another feature I didn’t expect, upgrading your weapons. The plasma rifles are Skynet tech, and as you murder machines you pick up Skynet chips to infuse with these, kind of like say the runes in God of War. These affect things like fire rate, clip size, damage, the such like, all giving bonuses that are very useful. They aren’t one size fits all though, and you have to line up the chips according to several wire designs on their right and left sides for them to work, and you have to always have three attached at once.

Given we’re already talking about upgrades, I was impressed with the implementation of skill trees, even if they feel like they’re there just to be there. You have all your normal stuff, percentages of additional damage, taking less damage, lock picking or hacking more difficult doors and computers, and more. While it could be more stuffing, it doesn’t hurt the game at all, and I’ve enjoyed my time filling those out. It does look like you need to find skill books in the world to finish the entire slate of them, as I fell one or two points short.

Speaking of the world, I like the levels even if they are kind of grungy, although this is the apocalypse we’re talking about. You’ll be traversing a largely ripped up landscape, with broken buildings surrounding you for a lot of the game, with some Skynet facilities and even a mountain hideout mixed in. These are open, and the exploration available is a big win in my opinion. Because the side missions are engaging instead of padding, these environments are actually worth digging through. There are plenty of different resources to find as well, so many of your trips off the beaten path will be rewarded with resources to trade for ammo and health packs, or crafting items to build them. 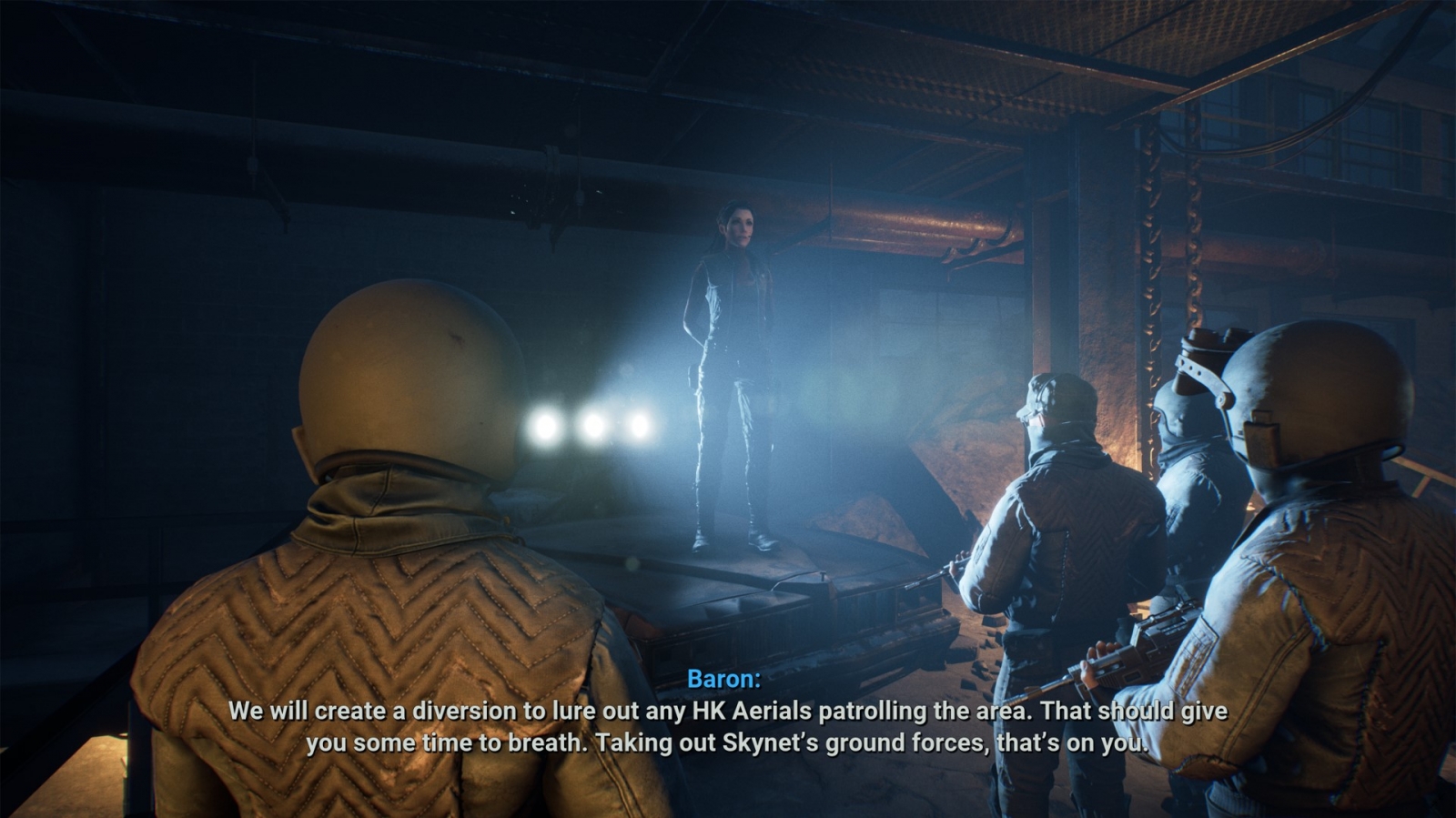 While the world is barren and empty of life, it’s not short of Skynet machines that want to kill you. Terminator: Resistance strikes a good balance between the big and small robots, never throwing more at you than you can handle based on what equipment you’ve earned the right to use through story progression. Even if there’s a team of T-800s heading your way and you’re armed with a pipe, this isn’t the end, because usually there’s a rusty car to hide behind or a route behind some walls to make it to your objective without engaging with the enemy. It all feels really fair, and the stealth mechanics work well. That being said, there’s nothing like pounding a T-800 into the ground with plasma fire, and shooting all of them up is epic.

Where Resistance succeeds with it’s narratives, I feel Annihilation Line rings more hollow. This spin-off takes place after you defeat the Infiltrator, a lifelike Terminator sent to kill you. You’re still playing as Jacob Rivers, but you’ll be making a trip out of the shelter with a familiar face in Kyle Reese, the protagonist from the first movie. In this escapade you join his team to figure out what’s going on with a nearby camp of survivors going dark.

While I thought the story itself was okay, it was missing the engaging relationships from Resistance. There’s an empty feeling to the dialogue, even when the characters have legitimate problems they’re working through. It’s like some magic is missing, and even though the characters themselves work well, I’m just not feeling it.

Thankfully the gunplay is still fun as before, and because of where you start in the story you’re immediately wielding a plasma rifle, meaning the devs are free to throw even more Terminators at you. More still, because they outfit you with plenty of skill points at the start (this DLC is separate from the main game so you’re reset to one), and with you joining a squad, the idea to chuck every metal being at you seems to have been the prerogative of Teyon. It’s challenging yes, but is also incredibly exhilarating destroying bunches of Terminators. 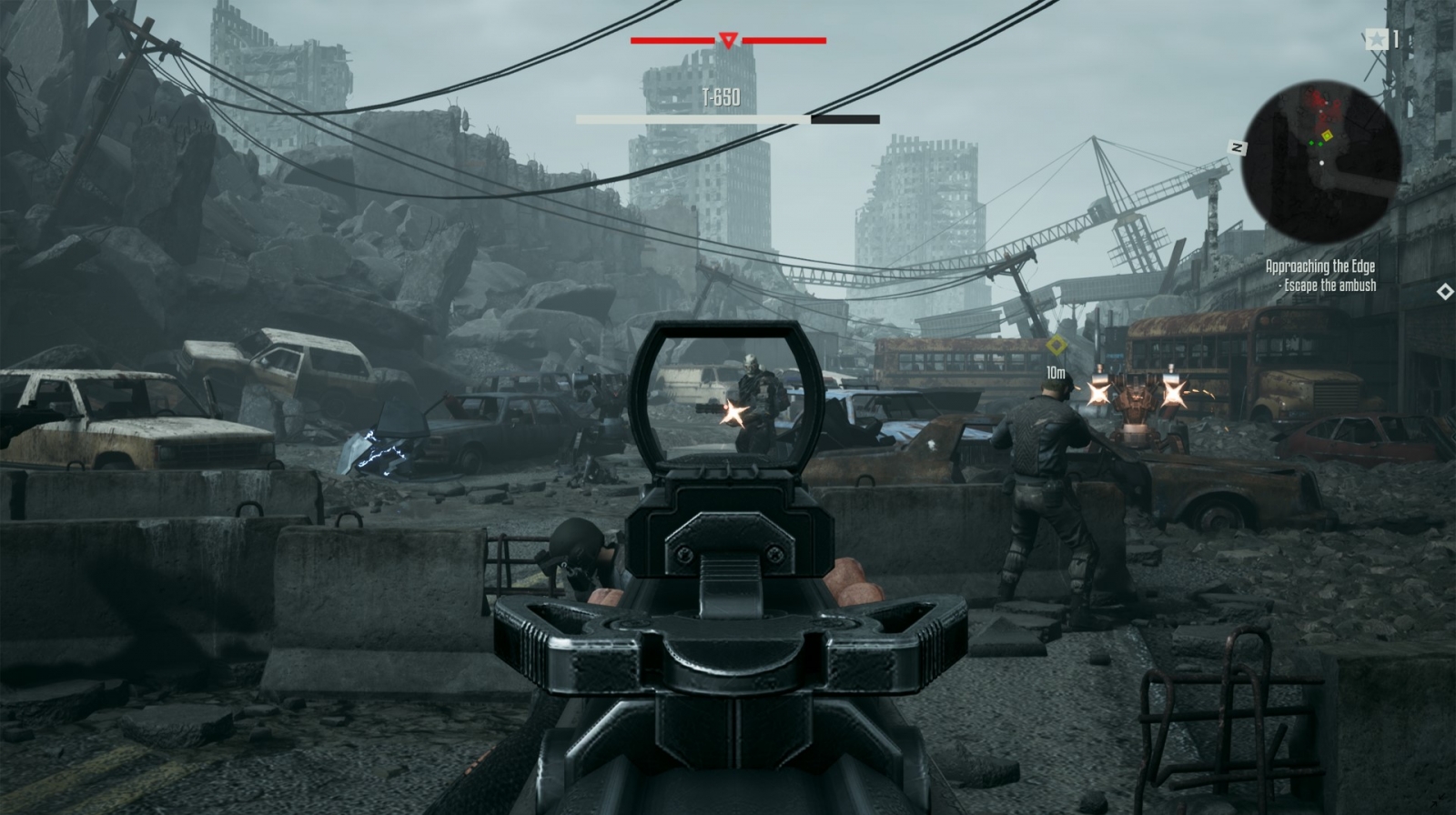 Probably the best moment comes at the end, with a fun, large-scale boss battle coming right after a big twist in the previous mission. This is followed with an interaction I feel like was supposed to pull at my heartstrings, but fails due to a lack of foundation. It’s kind of the crux of the narrative, and I don’t want to spoil it for you, but it just comes across as vacuous without more set up than the opening tutorial mission. Yeah, the visuals do look a bit cleaned up, but it seems like what was the heart of the base game isn’t there.

Terminator: Resistance shows a bunch of potential, even if it doesn't always meet it. I was happily surprised with deeper than expected progression, and great dialogue and relationship building. But playing the game I feel stuck in the past, with visuals from yesteryear meeting good but standard gunplay. The worst part is watching the newest piece, the Annihilation Line DLC, take a step back. The Wolfenstein series does better in this sub-genre, but Terminator: Resistance is still a lot of fun to play, which says something about where it could go if Teyon gets another shot.

David Burdette is a gamer/writer/content creator from TN and Lead Editor for Gaming Trend. He loves Playstation, Star Wars, Marvel, and many other fandoms. He also plays way too much Call Of Duty. You can chat with him on Twitter @SplitEnd89.
Related Articles: Terminator: Resistance
Share
Tweet
Share
Submit