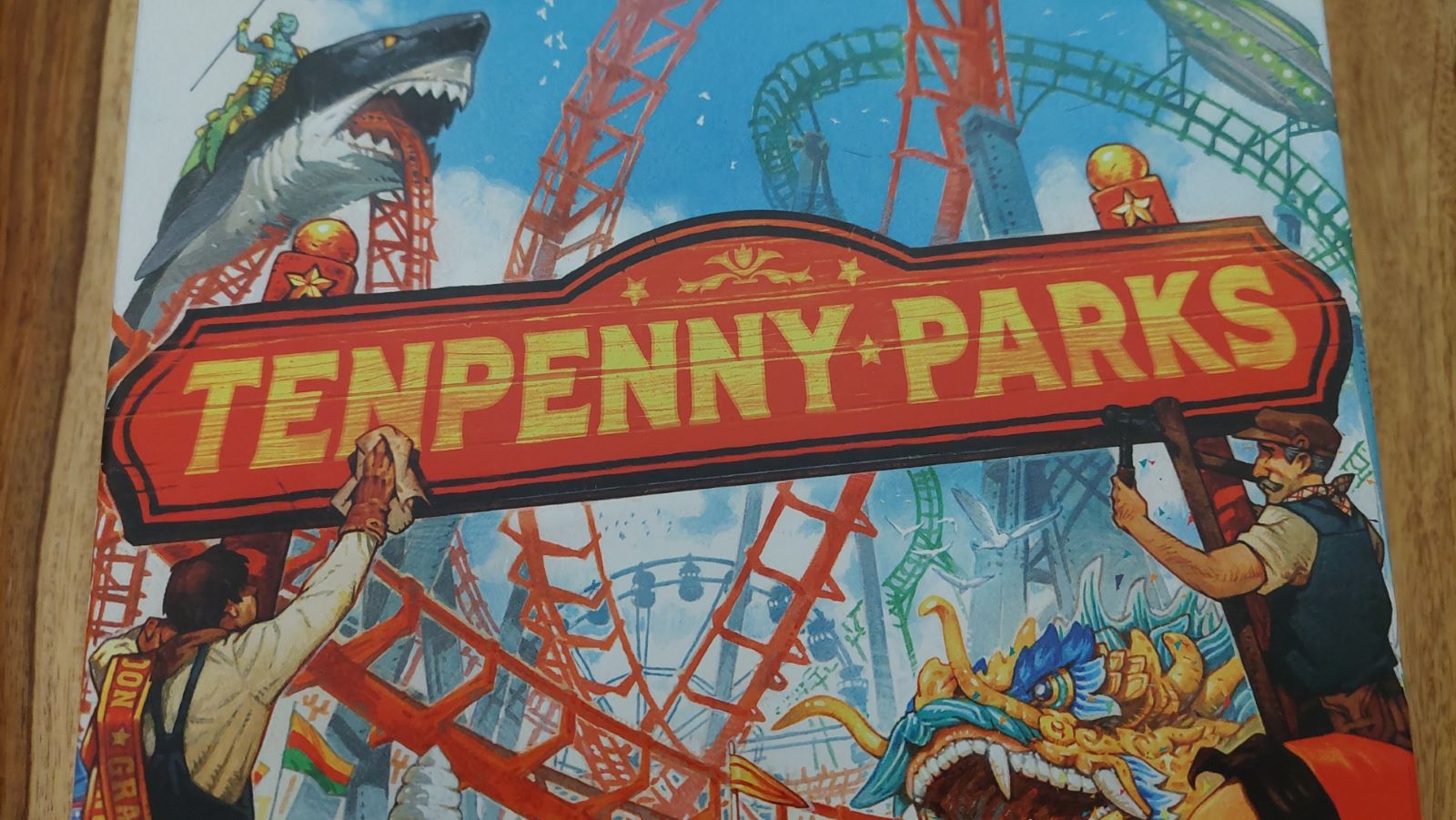 Come one, come all, to see the magnificent Tenpenny Parks! It’s got worker placement, it’s got polyominoes, it’s got player interaction, it’s got asymmetry, it’s beautiful inside and out, it comes from the makers of the beloved Cartographers and Roll Player, aaanndd iiiitts… Alright. Yeah, It’s ok.

From Thunderworks Games, Tenpenny Parks is a small euro-style game which tasks 1-4 players with building the best attraction park. Played over five rounds, players create their park by buying land, cutting down trees, building concessions, and more. At the end of each round, players score bonuses for being in the lead on either of the three emotion tracks. The player with the most visiting persons, or VPs, wins. 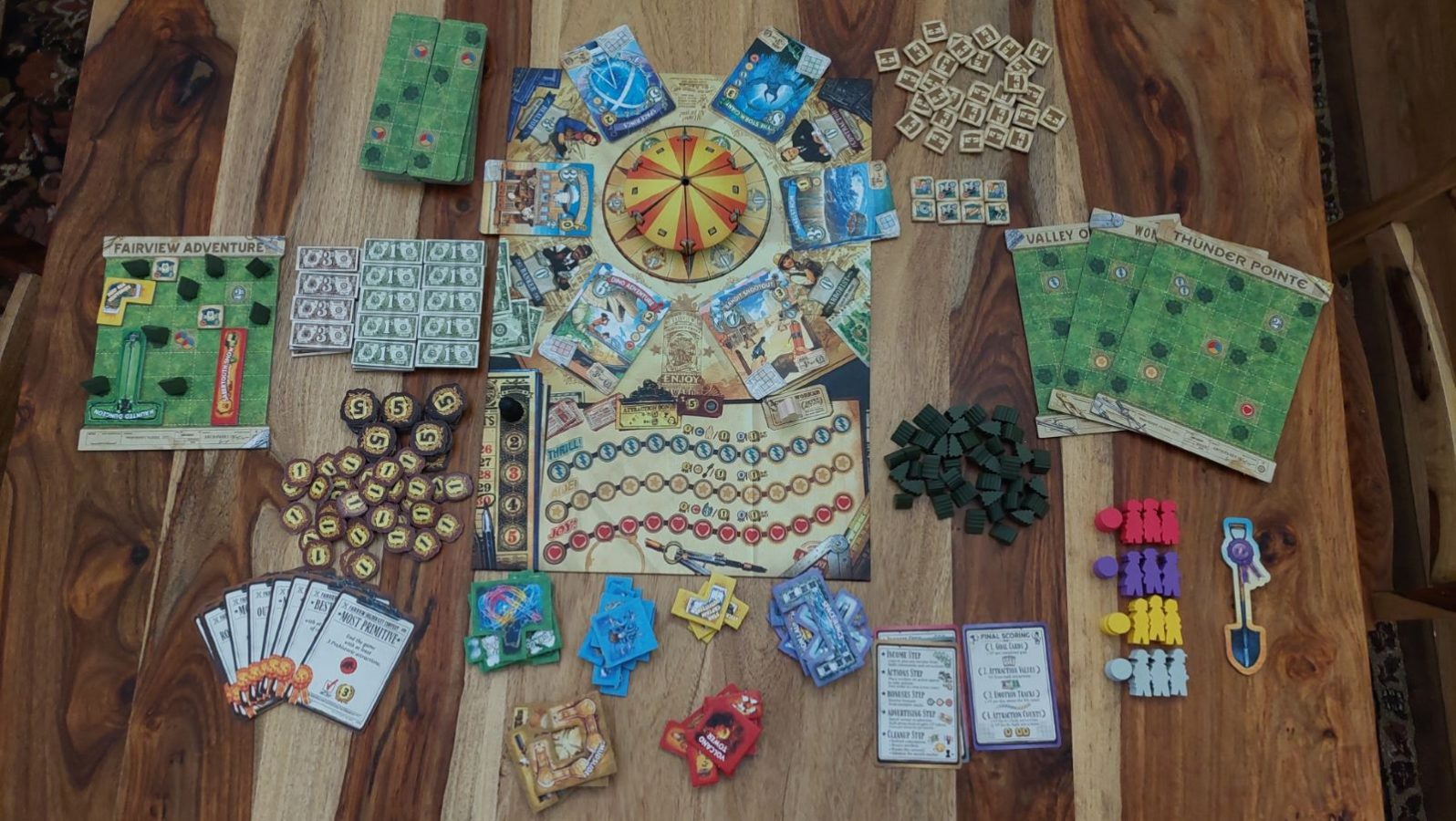 Tenpenny Parks is much simpler than your typical euro game, and plays in roughly an hour. Also unlike many euro games, the rules are crystal clear and concise. In fact, this might be the simplest euro-style game I’ve played – more on that later. Tenpenny Parks breaks its five rounds into five steps: income, actions, bonuses, advertising, and cleanup.

Play begins with everyone taking their first income of 3 dollars. As for actions, players have three workers to place between five types: builder, banker, arborist, contractor, and realtor. The builder spaces appear on a rotating carousel within the board and each corresponds to an attraction for sale. Each builder space on the carousel is marked by a unique price adjuster that increases or decreases the cost of respective attractions. When workers are placed here, the player pays for the corresponding attraction and places the unique attraction piece into their park board. When placing tiles, players cannot build on top of trees, and tiles may only touch diagonally. Importantly, the builder spots are the only spots that follow the traditional worker placement rule of allowing only one worker; the rest can hold any number. 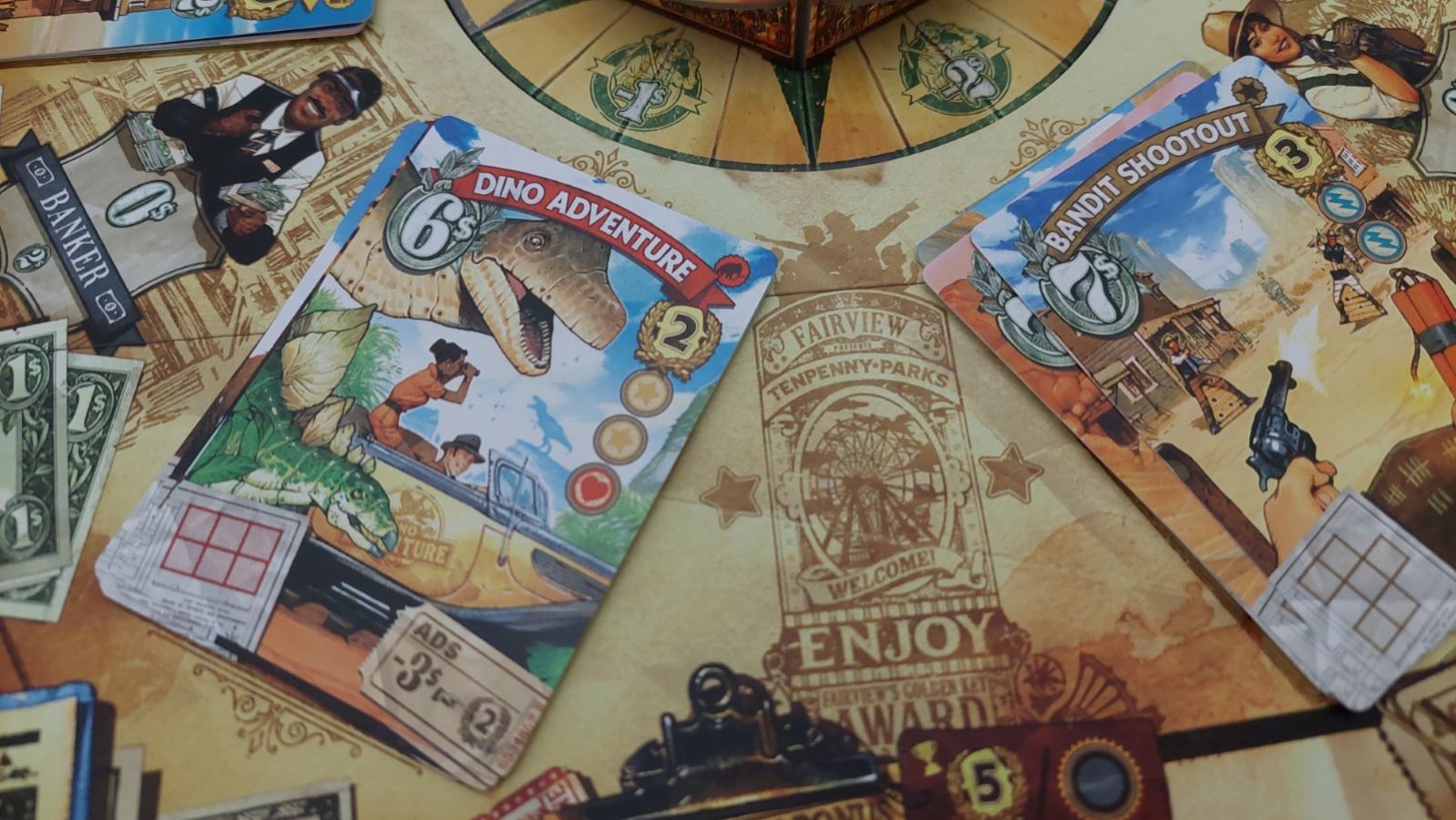 The other four actions are all fairly simple. The banker gives the player two dollars, the arborist allows the players to remove trees from their park, the contractor lets players choose from a small pool of revealed concession tiles, and the realtor allows players to buy an extra piece of land to extend their park for three dollars. Concessions are one square tiles that give small bonuses like income and emotions; they’re like free mini attractions. 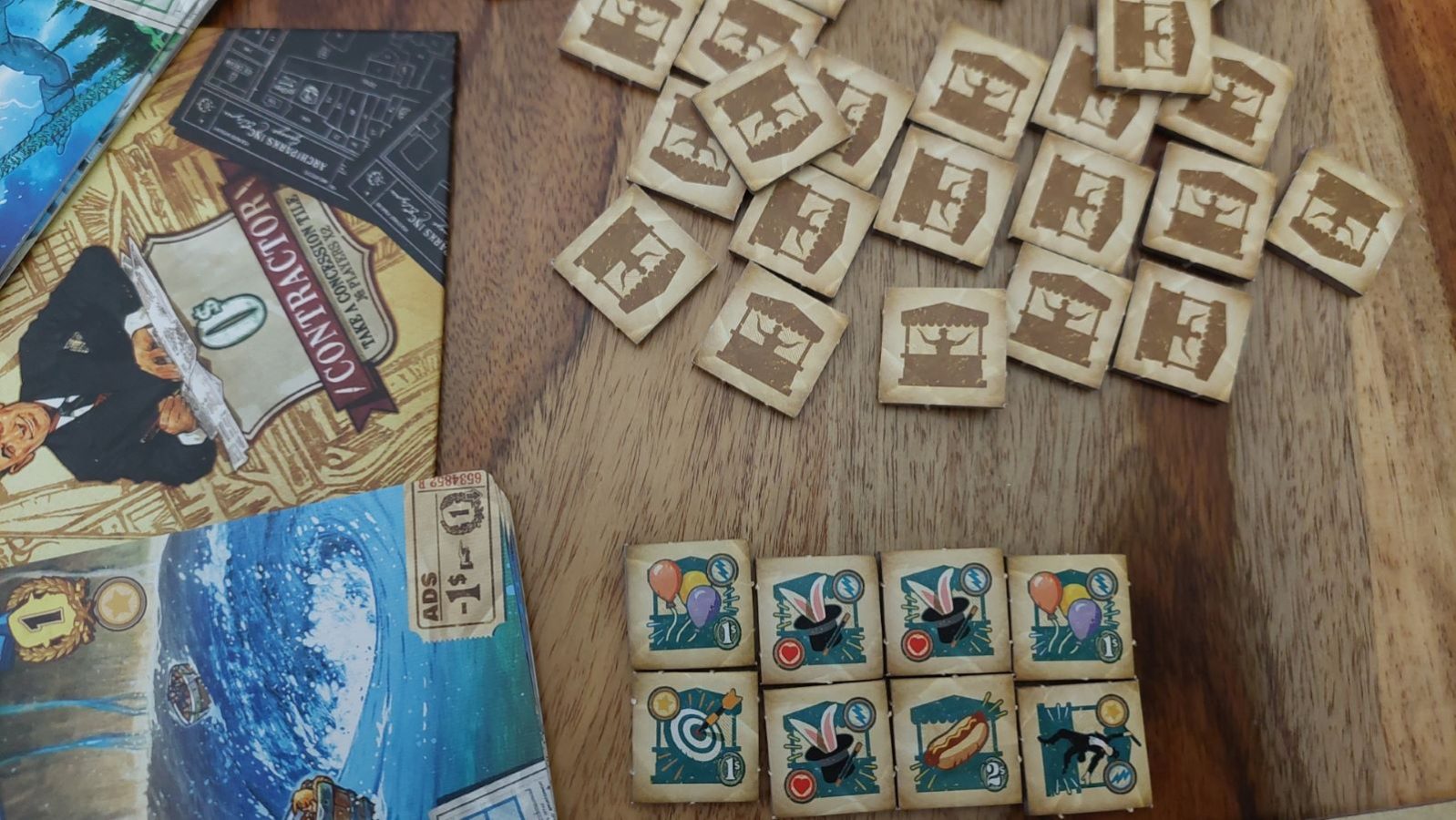 As players place concessions and attractions their park will gain three various emotions, marked by three tracks on the bottom of the board. During the bonuses step, the leading players on each track will get to choose respective bonuses based on which track they lead. For Thrill, the lead may take one VP or move their marker backward one step to receive an extra worker for the following round. The leading player on the Awe track may take on VP and give the shovel token to the player on their right, or bump their marker down one to take the token for themself. The player with the shovel not only goes first, but gets to rotate the carousel to their desired position. Finally, the leading player in Joy may take one VP or move their marker back to gain three dollars. In three or four player games, the player in second on each track receives one VP. 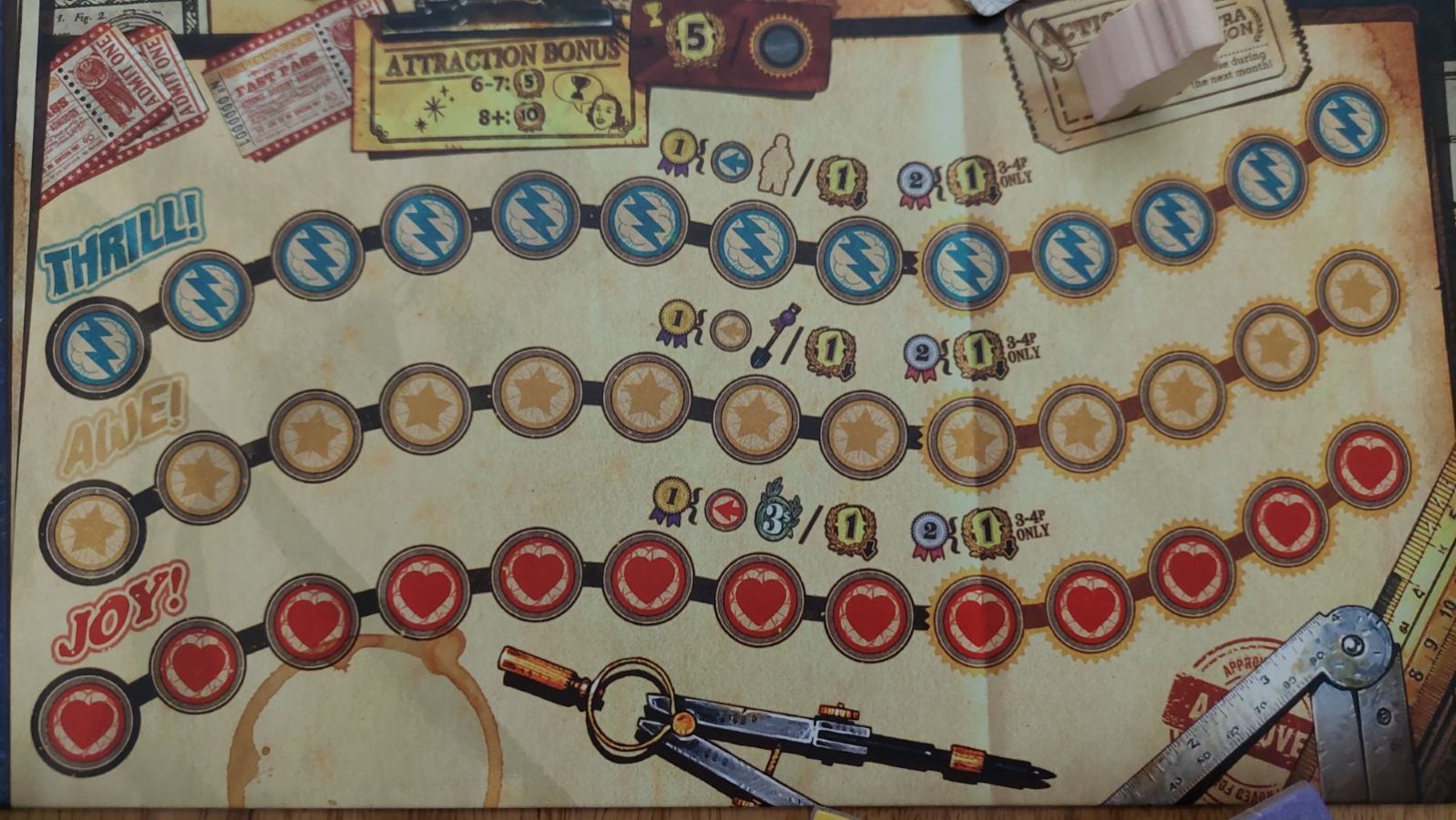 Next up is advertising, where players use their built attractions to convert money into points. Each attraction has a defined amount marked on their card, and can only be used once per advertising step.

Lastly, The cleanup step simply refreshes the board for the next round. After the last round points are tallied. Aside from points accrued throughout the game from various bonuses, players earn points from goals they chose at the beginning, attractions, end-game bonuses for reaching certain levels along the emotion tracks, and a bonus based on final attraction count. 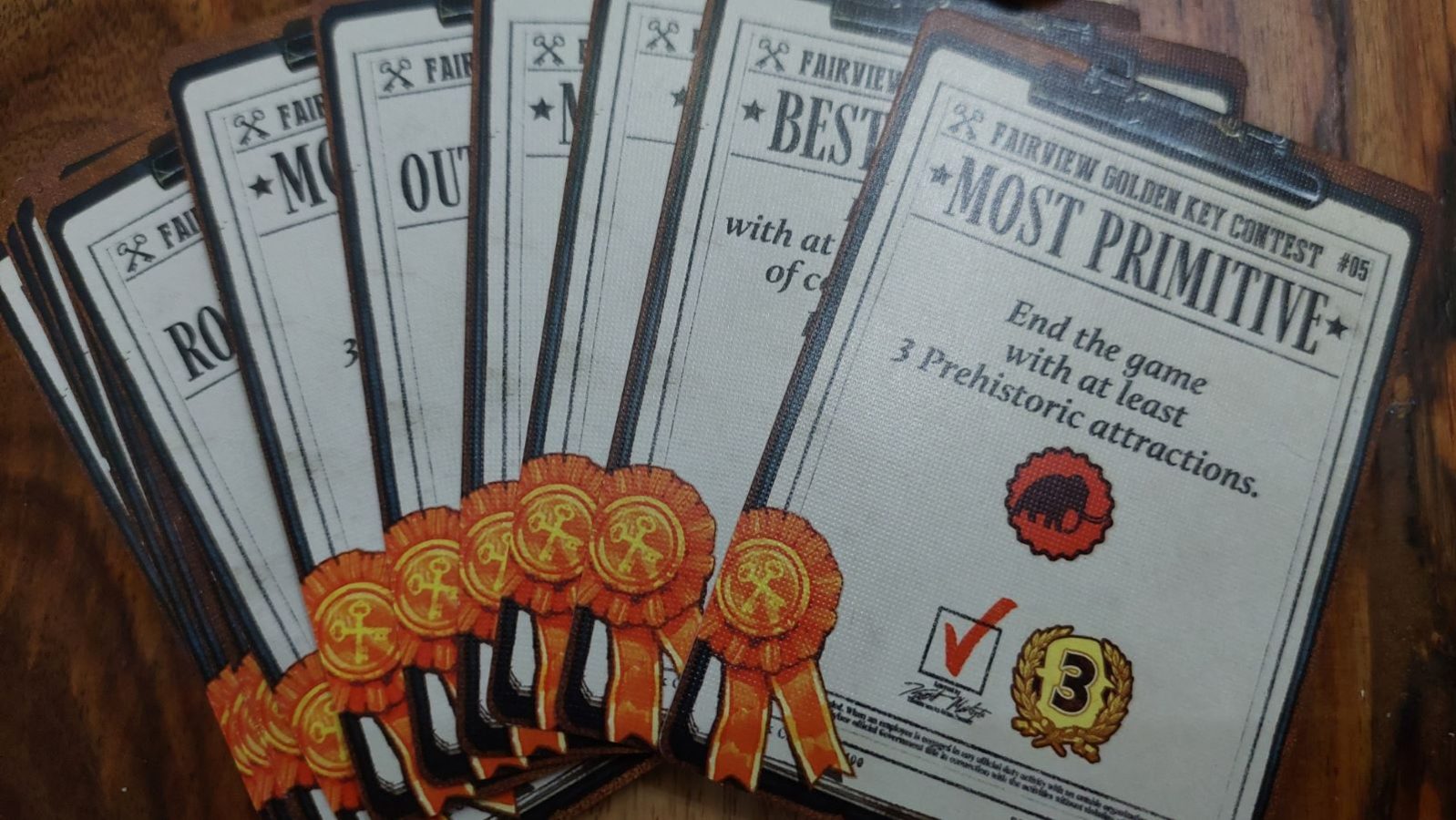 Again, Tenpenny Parks is the simplest euro style game I’ve played. For the record, I love simplicity in principle, especially when applied with precision, but simplicity can easily suffocate game design, which I will argue happens here. Tenpenny’s worker placement remains the obvious example. Worker placement without a limit of one worker per location is just vanilla action selection with extra steps. Thus, Tenpenny Parks is more an action selection game with a small zest of worker placement for one particular action. It’s got the flavor without any substance, like hotdog water.

Secondly, the overall strategy of Tenpenny Parks fully reveals itself after only two or three plays.
Filling parks with attractions is perhaps the heartiest puzzle in Tenpenny Parks, but takes only one or two tries to solve. Players, myself included, usually fall for the trap of using concessions to grab early placement bonuses, before realizing there’s no longer any room for attractions. Once you’ve learned from that mistake and familiarize yourself with the placement rules, you’ve mastered Tenpenny Parks.

In a game with greater complexity, players can experiment with varying strategies and, ideally, leave the game with thoughts about what they would try differently next time. But in a system as simple as in Tenpenny Parks, players can try everything there is to try in only two games. Tiles can be placed differently, and decisions regarding emotion bonuses can differ, but that’s pretty much the fullest extent. Looking at the busy and intricate box art now, I almost feel lied to. 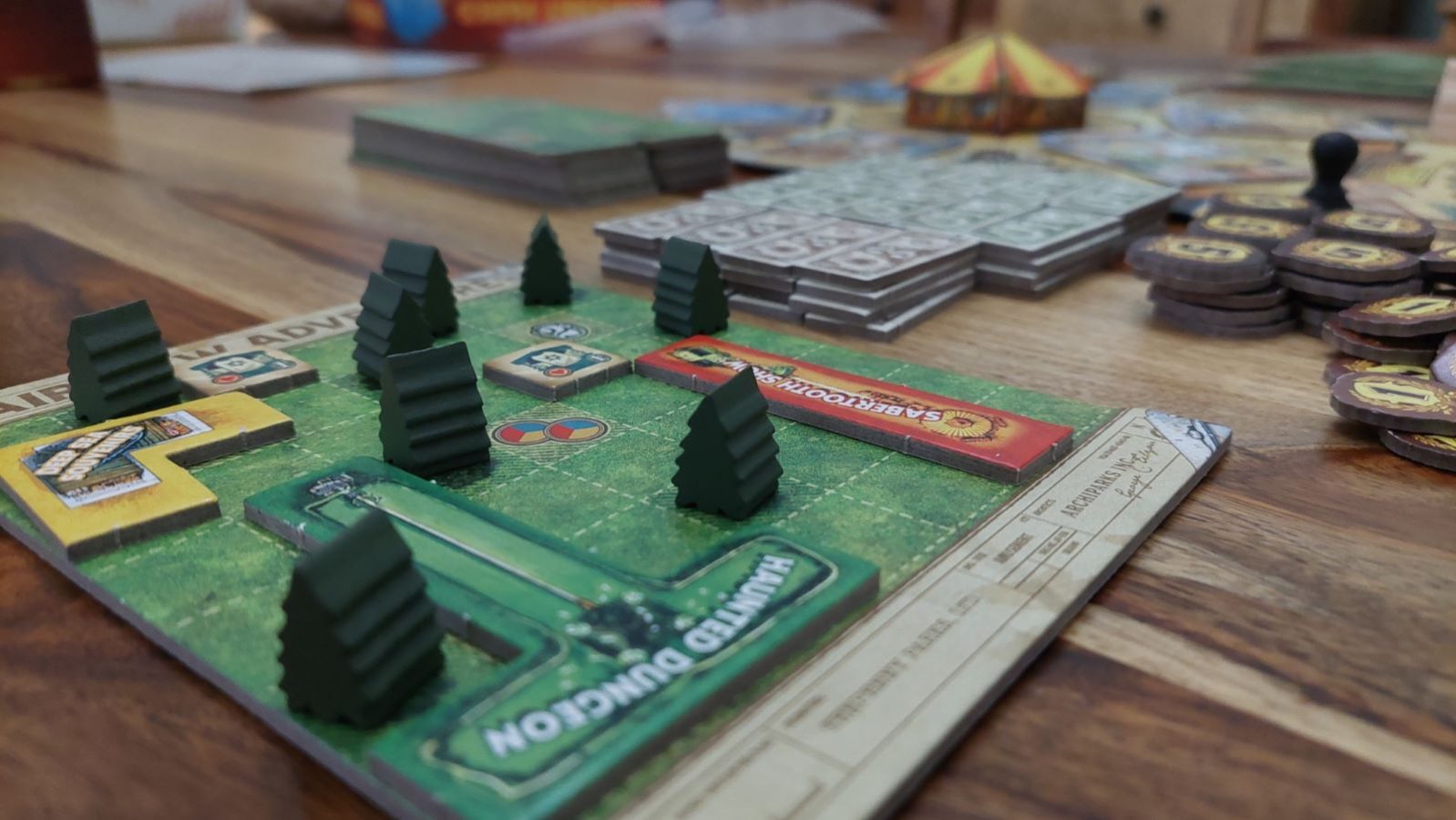 So, Tenpenny Parks is not for heavy gamers, but it’s easy to pick up and play, which means it’s a good introductory game right? Well, no… not really. What Tenpenny Parks achieves in accessibility it pays with lifespan. I would not recommend a beginner spend their money on a game they are likely only to play a few times. Don’t get me wrong, Tenpenny Parks plays just fine. It’s a very well oiled machine that doesn’t do much.

To end this review on a more positive note, the production of Tenpenny parks is fantastic. If I were to score it on production alone, I’d give a near perfect score. The colors are vibrant, the tokens are thick and solid, the workers are uniquely shaped, and the rulebook is impeccable. My only small issue is the busy board art obscures the worker placement spots. Honestly, Tenpenny Parks makes many games look bland and flimsy in comparison.

Tenpenny Parks is an exceptionally beautiful but exceptionally mediocre game, kinda Like that really attractive person you later learned was a bit of an air-head. It’s not bad enough that I would recommend against it, and it’s not good enough I would ever recommend it.

Ellis is a fledgling table top hobbyist with a passion for finding and sharing novel experiences. Always on the hunt for a good laugh or competition, Ellis hopes to draw deserved attention towards any conduit of positive memories, small enough to fit on a table.
Related Articles: Tabletop, Tenpenny Parks
Share
Tweet
Share
Submit