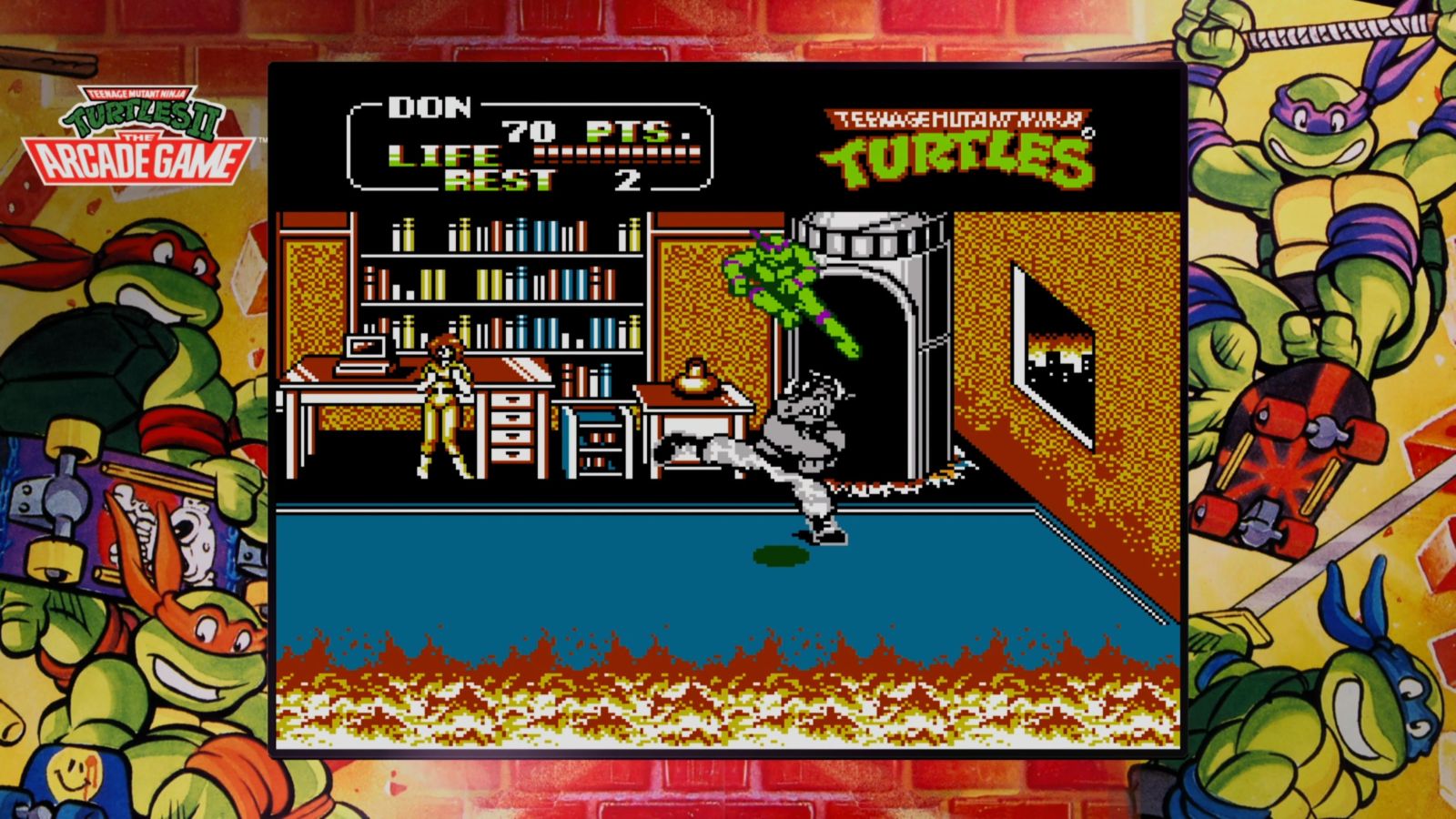 As a man currently in my thirties, I was practically raised by the Teenage Mutant Ninja Turtles. I fondly remember catching the original films at the theater, attempting to do yo-yo tricks like Michelangelo in TMNT 2, collecting the action figures, playing the NES classics (and dying over, and over, and over to that stupid seaweed level) and even knew the words to Ninja Rap. In the years since I’ve revisited the videogames on countless occasions and while a few may not be as great as the nostalgia of my youth remembers, most are still incredibly well-made for the era and pack in a ton of replay value, especially when played co-op. So of course, when a chance to review Teenage Mutant Ninja Turtles: The Cowabunga Collection was offered to me, I immediately accepted. 13 classic games with a slew of modern updates? Count me in.

It is obvious that a lot of love and attention was put into crafting TMNT: The Cowabunga Collection into the ultimate nostalgia package. The title screen features a wailing guitar performing some of the series’ signature music as you decide whether to hop online, check out the game list, or visit the Turtle’s Lair. The Turtle’s Lair is the most surprising feature here; an incredibly dense collection of everything TMNT related including strategy guides for every included game, high definition versions of the original boxes and instruction manuals, vintage magazine and catalog ads, an impressively large collection of comic book covers from multiple comic series, a gallery of still frames from all seasons of the 1987/2003/2012/2018 television shows, interesting behind the scenes documents for each game including concept art/enemy designs/level designs,  and a comprehensive music section which features the full soundtracks for each game. For fans of TMNT, the Turtle’s Lair will be almost as exciting as re-visiting the games. 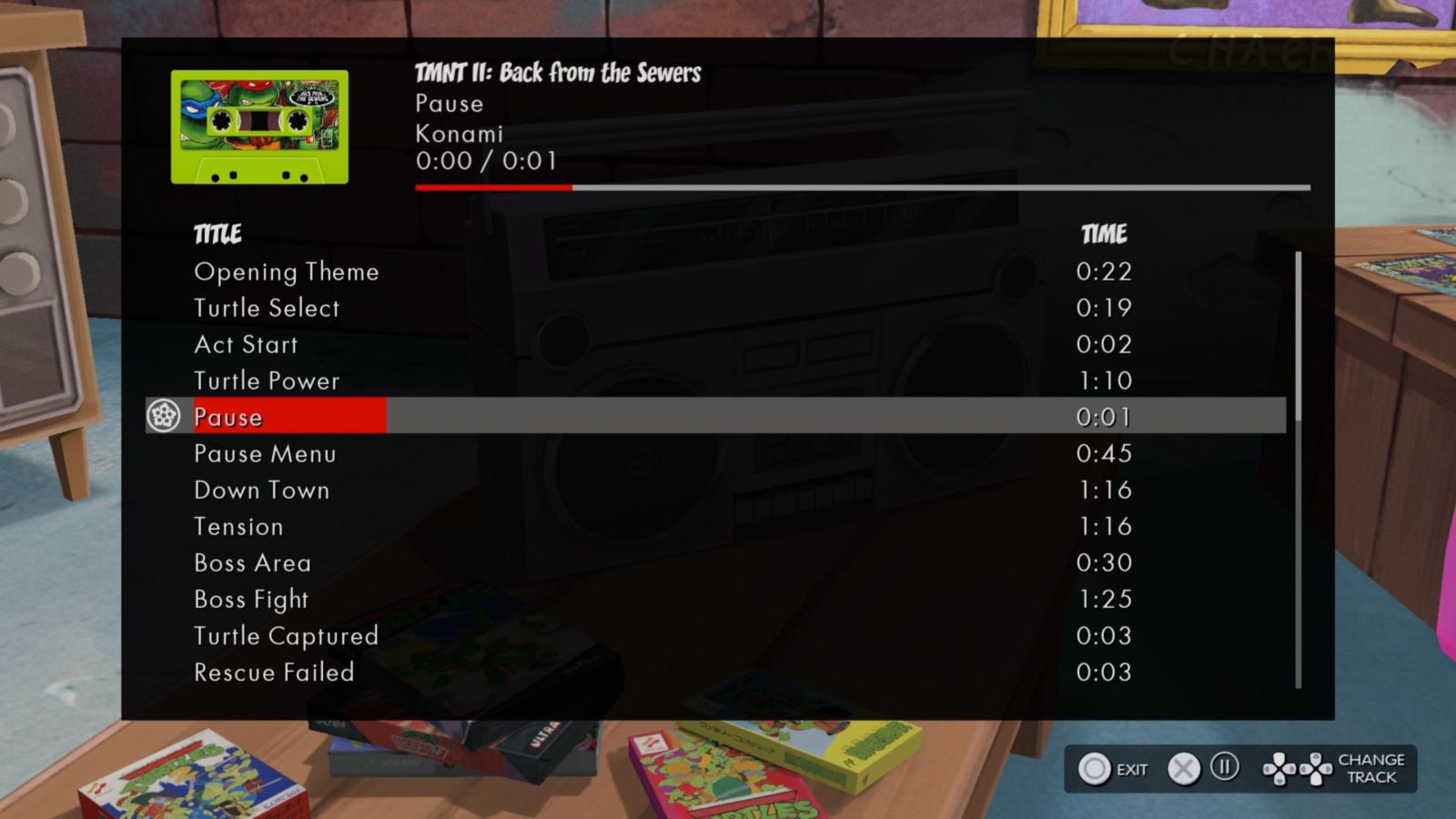 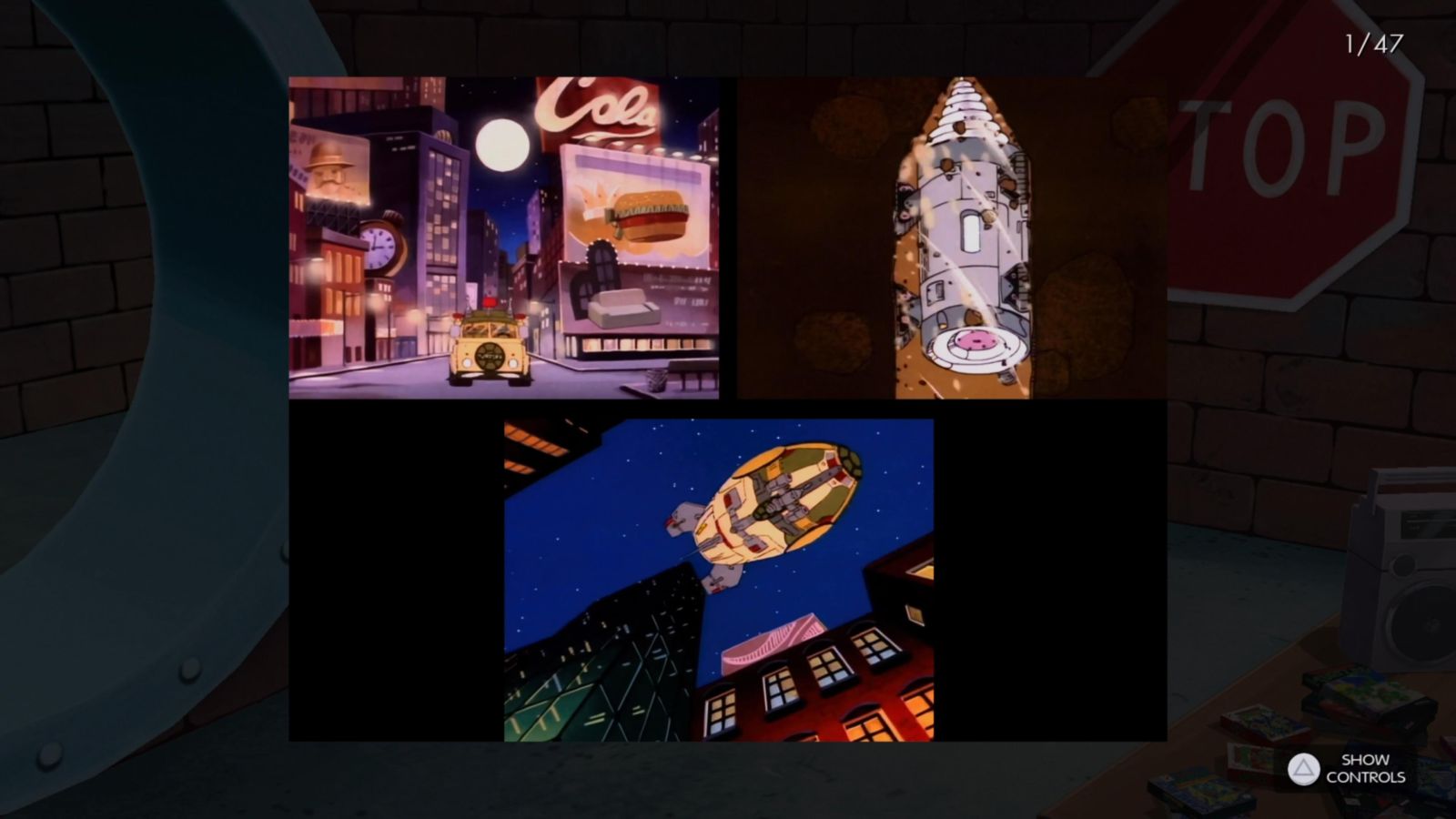 Speaking of games, there are 13 available ranging from the GameBoy to the arcade, each with enhancements (which I’ll explain in more detail a bit later), many with the ability to play with 2 to 4 players either local or online (aside from TMNT on NES and the GameBoy games which are all single player only and a few of the games which unfortunately do not feature online play), and the ability to watch a full playthrough of each game – which may very well be the only way I ever see the ending to TMNT on the NES. While watching the playthrough you can hop in at any time and take over, a welcome feature which I haven’t seen much of since the Guitar Hero days. It’s great fun to have a game playing through in the background and allowing anybody visiting to hop in whenever they feel the need. 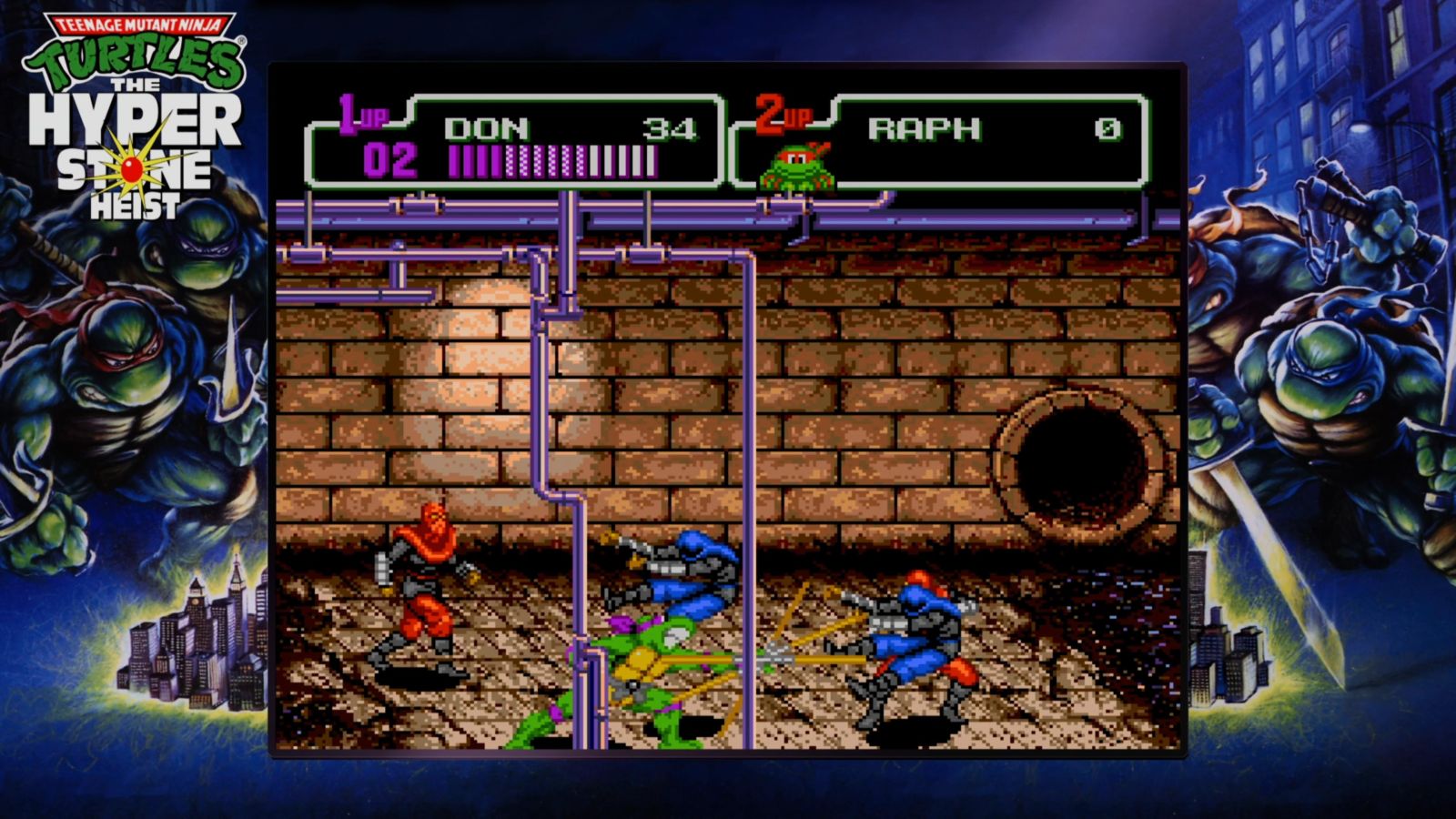 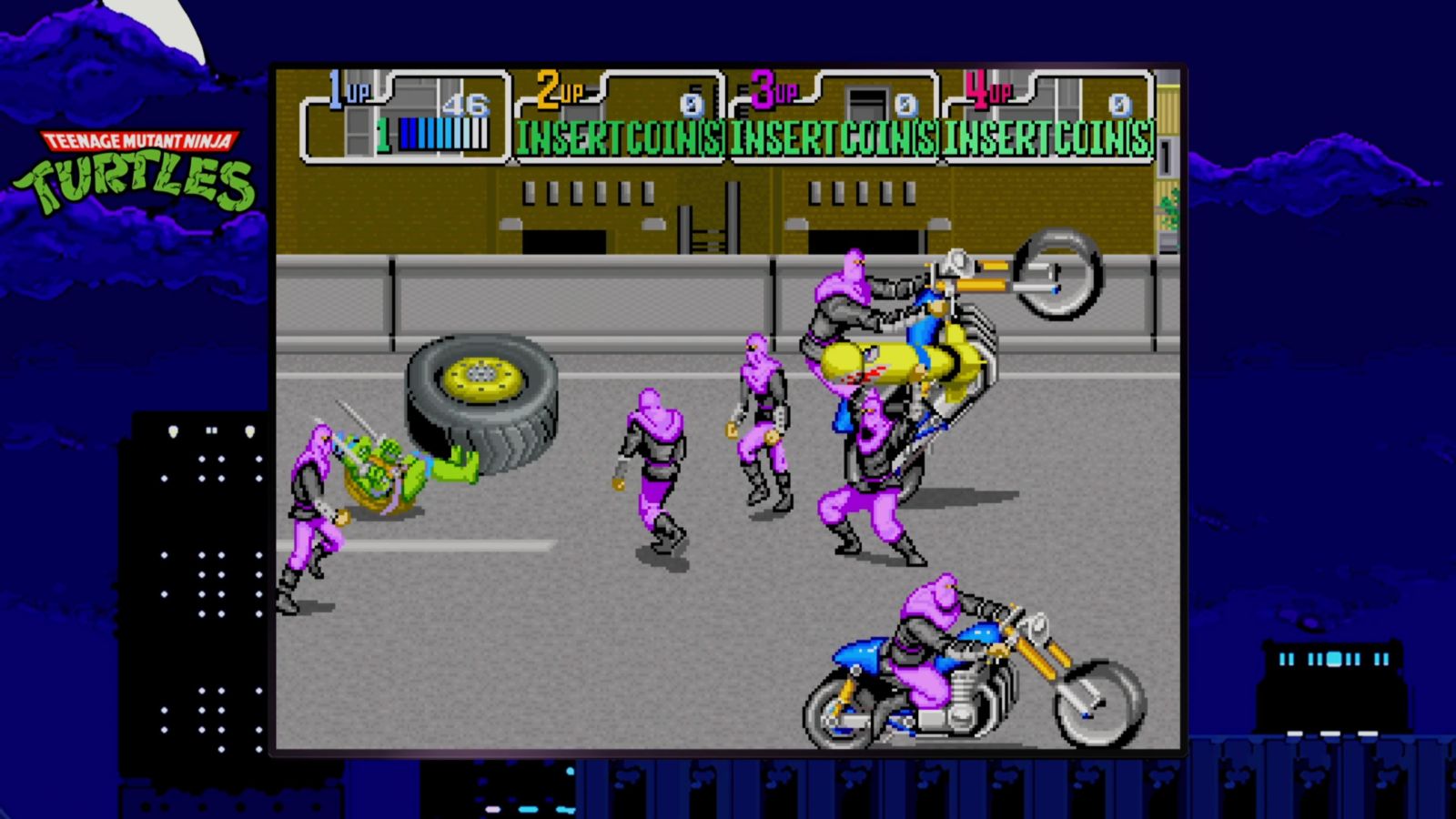 You may have noticed that there are a few duplicate titles in there, but each is unique in its own way. Tournament Fighters for the NES, SNES, and Sega are all slightly different, with the NES of course being the least impressive version as it was created on 8-bit software. The Sega and SNES versions, despite both being released on 16-bit systems, each have a unique look, with the Sega version having a more dark and gritty style while the SNES version is a bit brighter and more cartoonish. Other duplicates include TMNT: Turtles in Time for the Arcade and TMNT IV: Turtles in Time for the SNES as well as the Teenage Mutant Ninja Turtles arcade game and TMNT II: The Arcade Game for the NES. As for which version is the best, that really comes down to player preference but I suppose there’s a good argument to be had for the Arcade versions being the most complete and definitely the most graphically impressive.

One thing is for sure, this collection contains the definitive versions of all 13 games and marks the first time many of these games have been made available on a console, and that alone makes this collection worthwhile. Add in the previously mentioned enhancements and the Turtle’s Lair, and you have one of the best retro collection packages available. 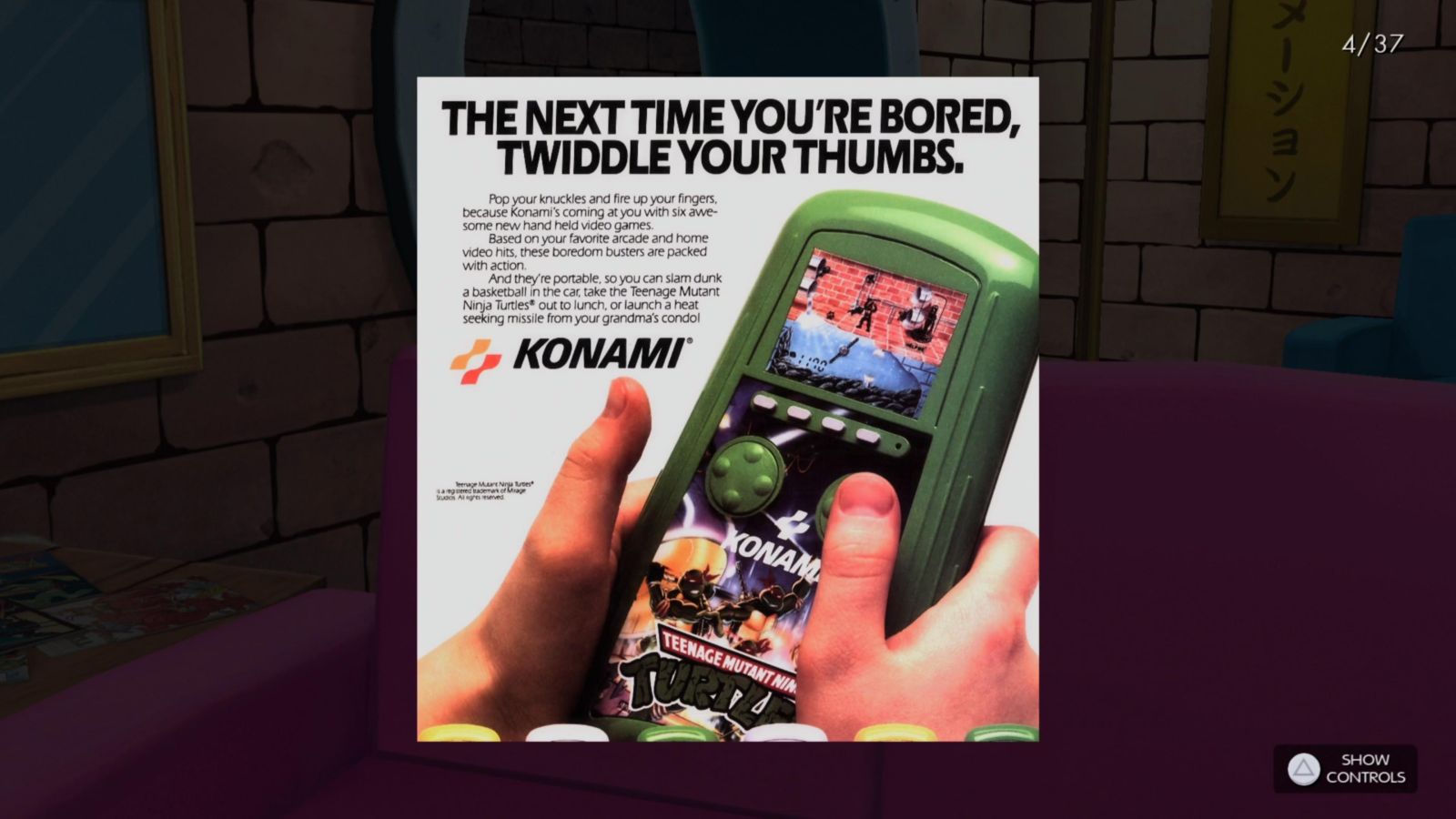 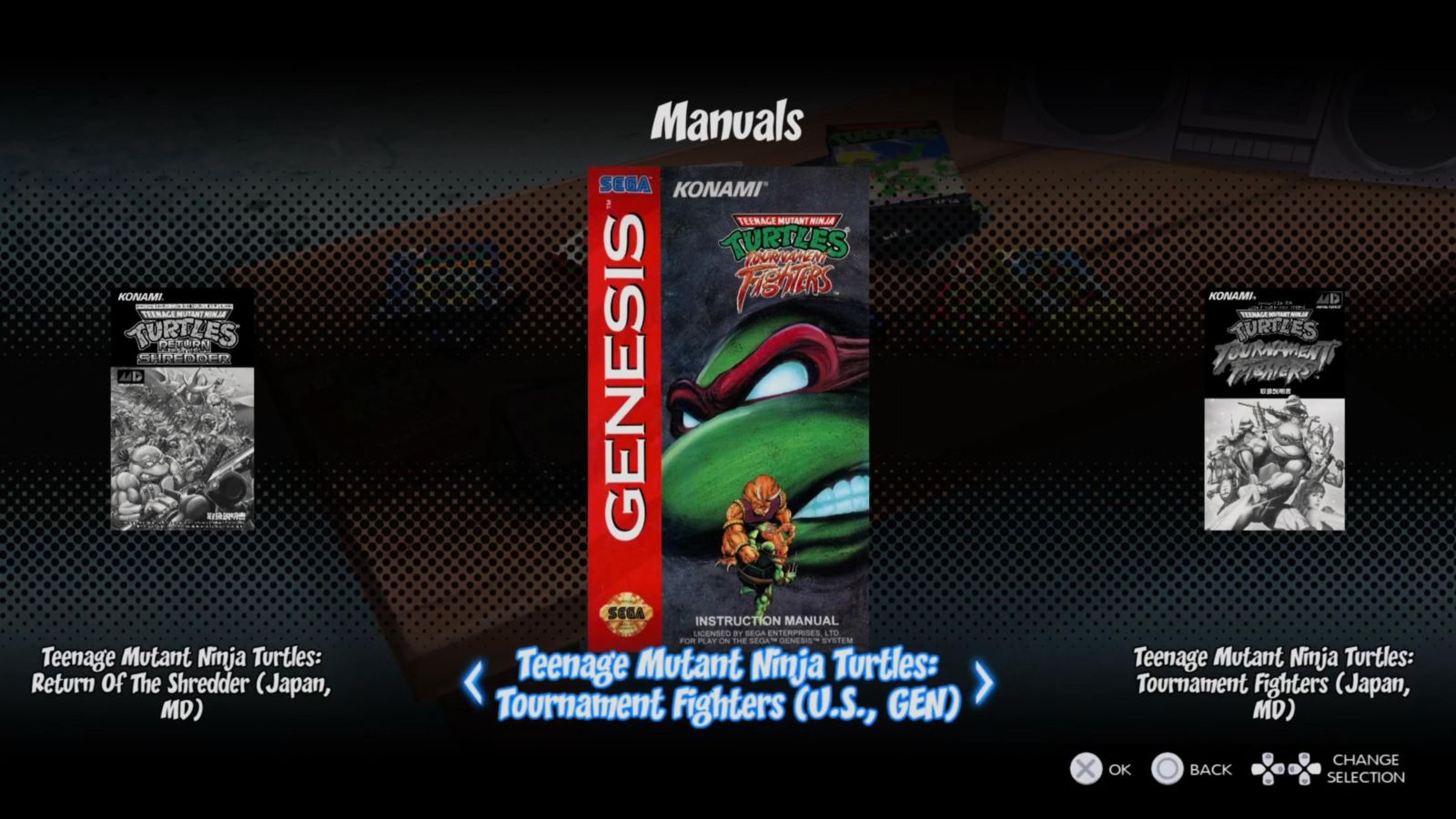 Enhancements allow you to switch up how you play these classics, adding a variety of options for each game including providing the ability to set your starting level, removing slowdown and sprite flicker, easy menu navigation, god mode or infinite lives, extra lives, fancy jump kicks, helpful map icons, nightmare modes, bonus stage modes, removing penalties, turbo mode, button dash, and more depending on the game. There were far more options than I had expected, and I had a blast running through some of the titles multiple times with different features unlocked. These enhancements really add to what are already – mostly – incredible games and provide ways for players of all ages and skills to enjoy each game.  I dare you to find a more exciting way to play the arcade Turtles in Time than turning on God mode, turbo mode, and nightmare mode and absolutely demolishing the hordes of enemies thrown at you. Also, the ability to remove sprite flicker and slowdown is immensely appreciated when playing through the NES classics, as it makes for a much smoother experience without changing any core gameplay elements.

When playing any game you have the ability to rewind at any time by pressing L1. L2 brings up a menu screen which allows you to save your progress or load a previous save, open up the strategy guide for that particular game, view the controls or change them as you see fit, a few options for screen size including original, wide, or full, filters including TV, monitor, and LCD, and the ability to toggle the collection’s border on or off. Personally I found the default settings perfect for each game, though it is nice to have options for those who need them. Keep in mind that these games were made in a different era and weren’t made to be stretched to fit today’s screen sizes, so messing with the size will distort the image. But hey, you do you. 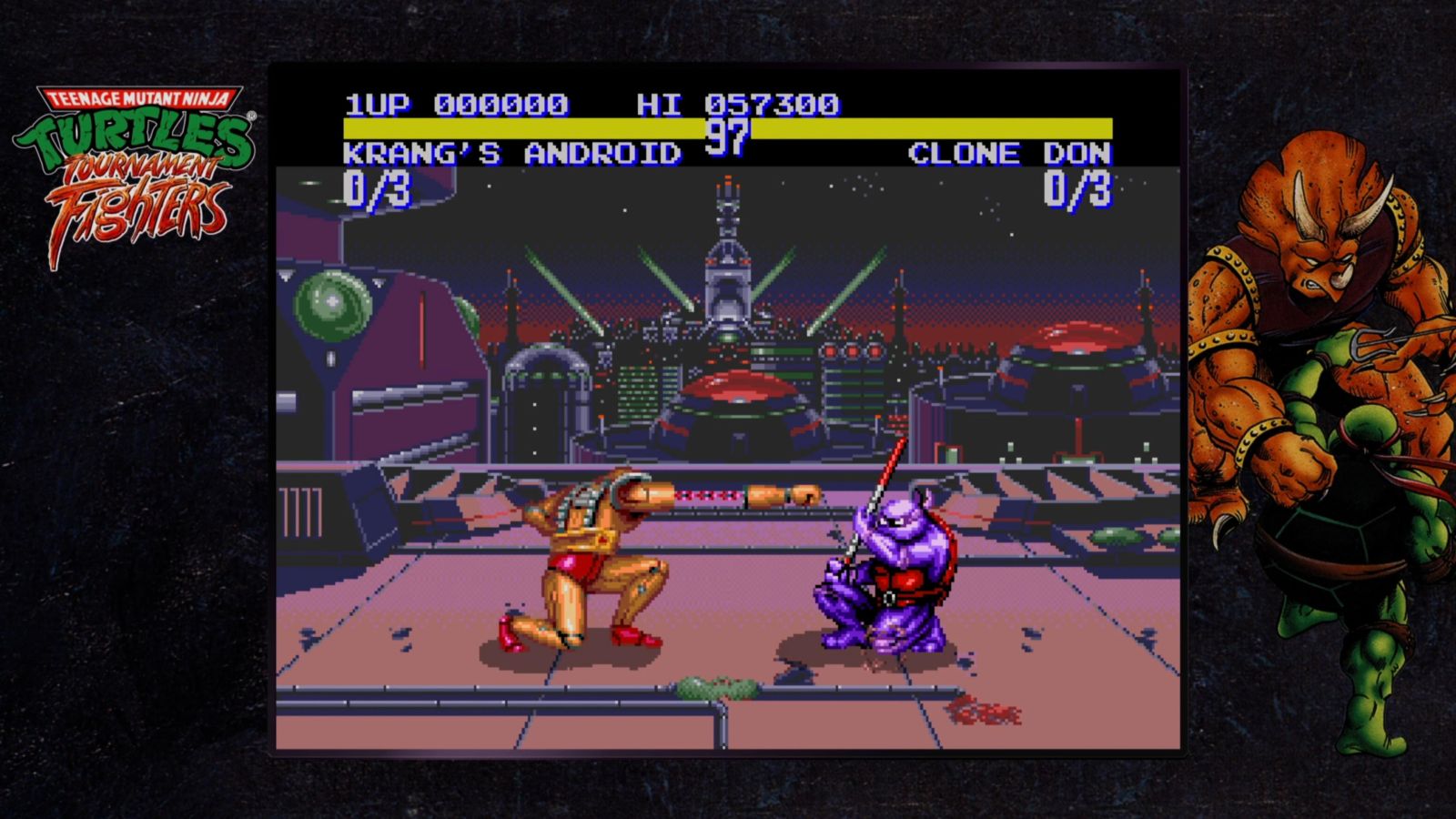 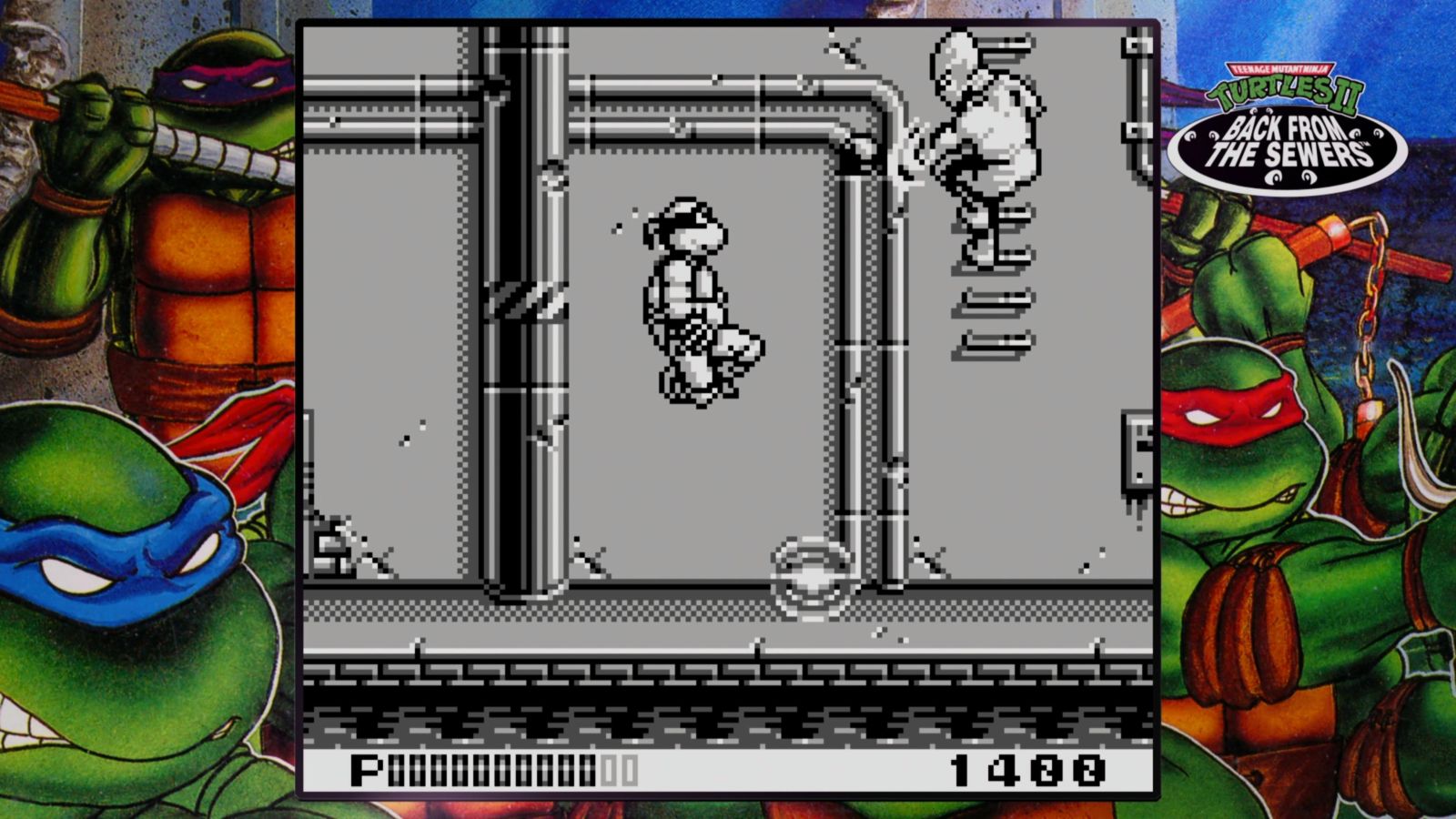 Each game plays exactly how you remember it, for better or worse. Most of these, especially the beat ‘em ups, offer up hours of fun – especially when playing co-op. Unfortunately, the GameBoy games aren’t quite as enjoyable due to their slow movement and technology on handhelds just not quite being where they needed to be to accurately bring the TMNT experience to life. Still, I have a soft spot for the GB games, especially Fall of the Foot Clan, and enjoyed revisiting them. The fighting games were never quite intuitive enough for me to really enjoy, not to mention I am embarrassingly bad at them. I’m still glad they are included in this collection though, as I’m sure there are those that will love re-visiting them, especially with the added enhancements, ability to save, play as bosses, and more. Overall, you have 13 good to great games in one incredible package, making The Cowabunga Collection well worth the $39.99 asking price.

All 13 games control exactly how they did originally, although you can use the D-Pad or thumbstick for movement this time around. I was surprised at how often I found myself using the thumbstick rather than the D-Pad and how good it felt despite it not being the intended method of control. Old habits die hard and no matter how many times I attempted to use the D-Pad, my hands would naturally seek out the thumbstick instead. The options menu allows players to further tweak the controls to match their preferred playstyle. Despite their age, most of these games control remarkably well – meaning that if you can’t overcome a particular boss or level, then you have only yourself to blame (well, that and the fact that some of these games were meant to steal your quarters). Thankfully, the addition of a rewind feature and a save feature help to alleviate a lot of the stress that stemmed from run-throughs, not to mention the previously mentioned enhancements, which can all but make you invincible in many games. 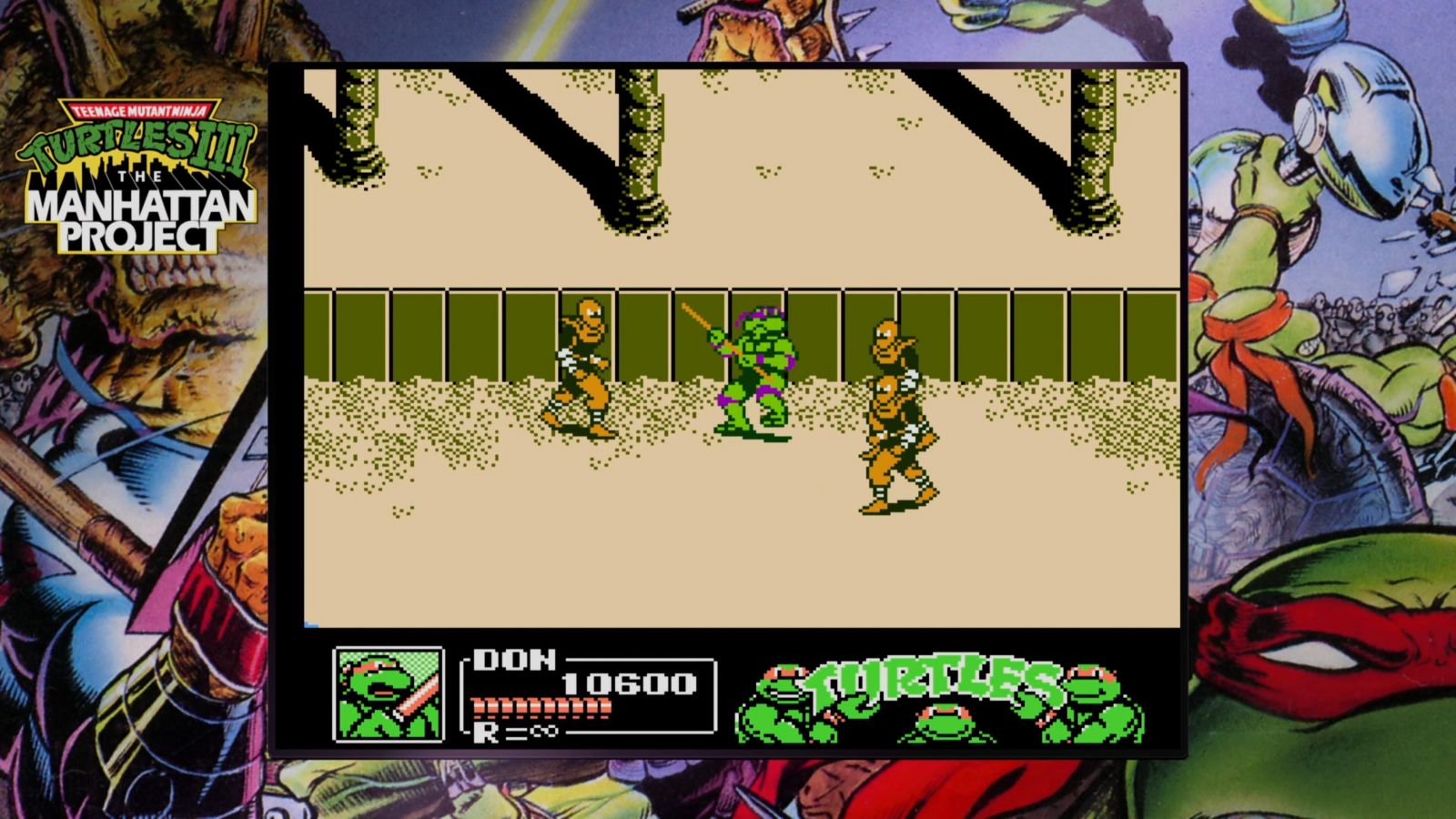 Speaking of saving, each game allows you to save, but unfortunately there appears to only be one save slot per game. Not a game breaker, but in modern times I’ve never understood why all games don’t allow you to have multiple saves.  Still, the games are short enough that I doubt anybody will be too upset if they have to replay a few levels. Plus you could always select the game’s playthrough and fast forward to the spot you want to jump in or, on most games, you can choose the level you would like to start on.

Every game which does have a multiplayer component allows you to either search for open lobbies where you can then choose which character you want to play as, or to create your own lobby. When creating your own lobby you can toggle between making it public or private and whether or not you’ll allow people to join a game while it is in progress. Overall, the online component worked exactly as intended, with no slowdown or issues connecting. Whether this will still be the case when the game hits the masses is to be seen, but during the time I had with the game I experienced no issues.

TMNT: The Cowabunga Collection is a painstakingly crafted love letter to a by-gone era of gaming, bringing 13 classic games to the modern age while adding in a slew of features including the ability to rewind, save, and toggle enhancements which greatly enhance the gameplay experience. Add in the impressively comprehensive list of documents available in the Turtle’s Lair and you have a collection well worth the asking price.

Richard Allen is a freelance writer and contributing editor for various publications. When not writing for Gaming Trend you can find him covering theatre for Broadway World, movies and TV for Fandomize, or working on original stories. An avid retro gamer, he is overly obsessed with Dragon's Lair. Chat with him via @thricetheartist on Twitter and @richardallenwrites on Facebook and Instagram.
Related Articles: Teenage Mutant Ninja Turtles: The Cowabunga Collection
Share
Tweet
Share
Submit