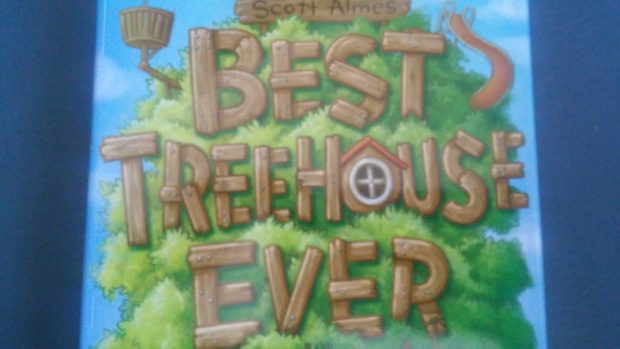 Parents trying to get their younger children into gaming often have the difficult choice between something above their children’s skill level or too simple to occupy themselves. Best Treehouse Ever tries to fill in this gap, introducing younger players to the forward thinking concepts of strategy and card drafting but with none of the daunting complexity of heavier games. It serves this purpose fairly well, though an adult player will still find themselves unchallenged quickly.

The concept is exactly as it sounds: each player is competing to build the grandest, most exciting treehouse at the table. Everything about the game keeps to this concept well, justifying each new rule and making them more palatable.

Each player starts with a tree trunk at their base, a balance token, and six cards. Cards represent rooms in the treehouse that will be added to it. These rooms come in six colors which represent the types of activities you could imagine in a massive, near-magical treehouse. Most of the game’s character comes from these cards, which are exactly as imaginative and outlandish as a child’s perfect home base would be. By the end of the game your treehouses can have chemistry labs, pirate ships, chocolate fountains, and more.

Players build up from the base according to a few key rules: you can place a card from a new color anywhere, but from then cards of the same color must touch that one. It makes deciding when and where to place a card require careful forward thinking. Building on a massive tree as you are, you must also keep track of how well it balances.

Tree trunks have three spaces at the bottom for the balance token. Each room placed left or right of center moves the token one space in that direction. Once you get to the end space you must place on the other side of the tree. No collapses allowed!

After placing a room into their treehouses, players pass their hands to the players to the right. The rounds go until every card is gone. This drafting element has the benefit of introducing players to the concept of drafting: keeping hold of what you want but watch to keep track of what the opponents will have access to. Colors are crucial and no one can have everything, so you need to learn quickly how to look at more than just your own table.

The scoring has its own strategy as well, and gives you a number of options to help balance differing levels of ability. There are six cards, one of each color, which grant one point per room to each player has and an additional point per room to the player with the most of that type in their treehouse. You can also choose to add in cards to be distributed to players which either increase the point values of certain colors or deny those points to other players. Making it even more complicated if you so choose are minor mission cards that grant points for specific configurations of colors somewhere in your treehouse. Players handle these cards and score for three rounds, after which the game is over.

Best Treehouse Ever tops out at half an hour of painless strategic fun. There isn’t any true depth here nor are there many strategies. The colors have no different abilities so the only variance in play comes down to what you happen to get dealt and how you handle the draft. I actually got the chance to play a few hands with some younger people, adding the extra rules along the way. They appreciated the feeling of building their treehouse and puzzling out the best way to do it. I had a blast connecting with them, but I cannot see myself playing it again without them. I appreciate that Best Treehouse Ever is short, simple, and playful, but it is too much so for my tastes. I suspect most grown players will feel the same.

Best Treehouse Ever introduces children to the strategy genre with care, respect, and a great deal of fun. While it can’t provide the same level of engagement for adults, the short play time and choices involved still provide a satisfying, if simplistic, strategy experience.

John Farrell is a legal aid attorney specializing in domestic violence, living in West Chester Pennsylvania. You can listen to him travel the weird west as Carrie A. Nation in the Joker's Wild podcast at: https://jokerswildpodcast.weebly.com/
Related Articles: Best Treehouse Ever, Tabletop
Share
Tweet
Share
Submit