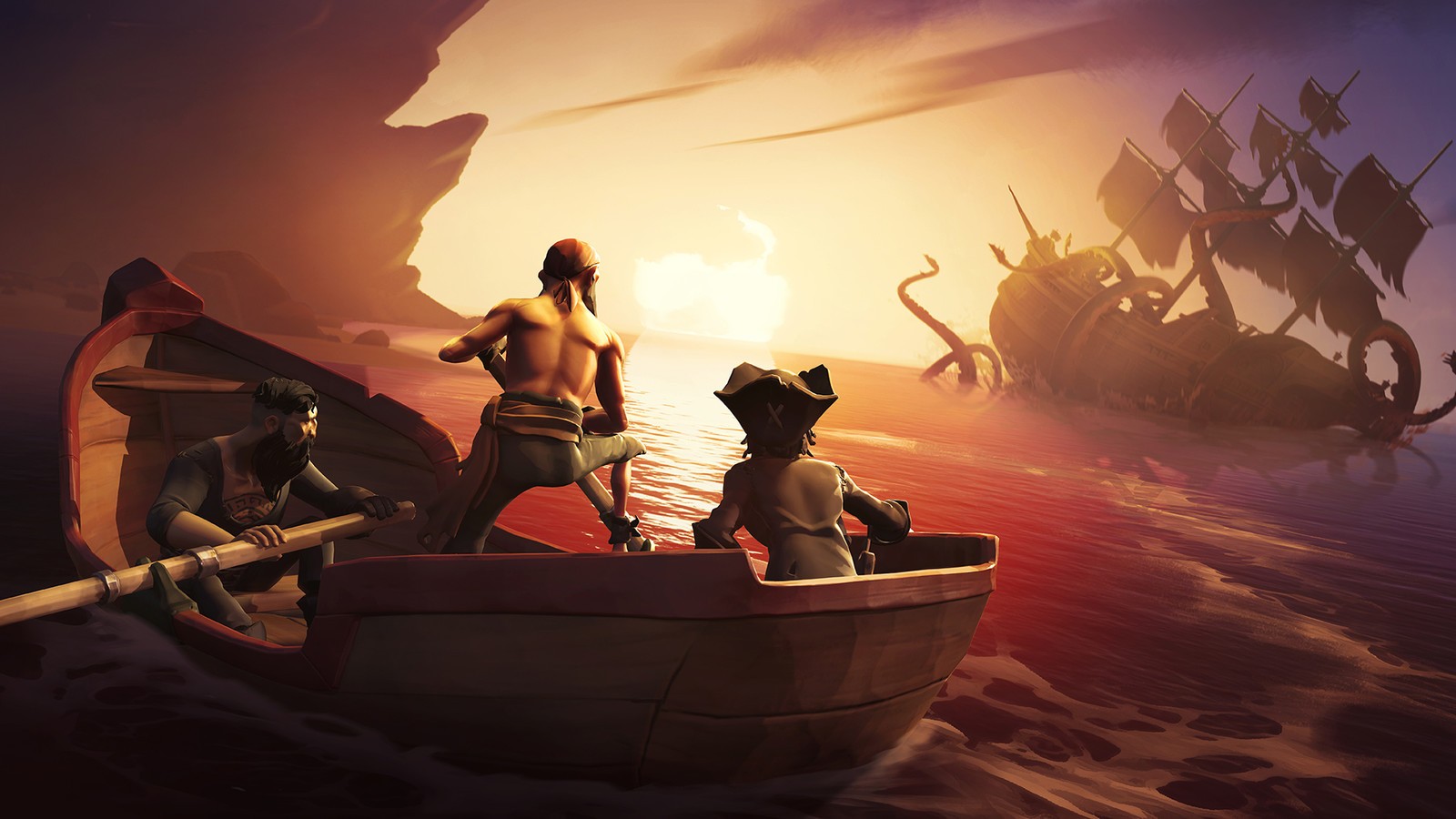 Back in the days of wooden ships and iron men, both pirates and traders alike kept secret journals called “rutters” that provided key information on the uncharted parts of the sea. In fact, they were so worried about this critical navigation tool that they often would create fake rutters for the enemy to find (so they’d stop searching the ship’s hold) in case they were boarded. We’ve recently gotten to hoist the sails on the Rare Studios pirate adventure, Sea of Thieves (our review), and today I get to check out Tales from the Sea of Thieves. They aren’t quite rutters, but they are way more interesting just the same. Ahoy, landlubbers, lend me yer ears fer a minute, and let me tell ye a tale…

Titan Books has traditionally worked on extensive art books for their game tie-ins, but this adventure book told from the perspective of scholar-turned pirate Good Lad Faintheart, as well as a few other characters that I won’t spoil for you. Throughout the book are editor’s notes, chastising Faintheart for her language, breaking the fourth wall, and even having conversations with her mid-book. It’s entertaining, as is the writing throughout.

There’s a lot of blood on these pages…

There are a few issues with grammar in the book that can’t be ascribed to pirate-speech. Another editing pass would have caught these, but they aren’t overly prevalent, just immersion breaking.

Throughout the book there are little bits of traditional tattoos, as well as artwork that the Rare team used to bring the game to life. Presented as a Lewis-and-Clark-esque chronicle of various passages and island excursions, there are entire swaths talking about the flora and fauna Faintheart encountered in her adventures. This lets Titan show off things like the full-page spread of parrot heads — a fantastic example of color saturation and color theory.

The color saturation in these is fantastic.

If you, like my wife, insisted on singing the sea shanties in Assassin’s Creed IV: Black Flag, you are in for a treat! There are a few shanties sprinkled in between some fantastic explanations of the kinds of games pirates would play, including lesser-known titles like Cho-Han, Karnath, Betty, and more well known variants like Liar’s Dice. It’s a great way to tie in with the game, while expanding on the universe seamlessly. It also expands your vocabulary beyond “yo ho, yo ho, the pirate’s life for me”.

One of the dangerous beasties you’ll encounter in Sea of Thieves are undead pirates. Tales from the Sea of Thieves covers these in the fashion you’d expect might be told in the oral tradition around a campfire and with a mug of grog. Entitled things like “Tales my papa told me”, they cover everything from cursed loot and pirate lords, to ships like the Ferry of the Damned and her Captain.

In a twist, the good Captain devotes a big chunk of the book about how she’s eager to spend forever with her crew, becoming (as she calls it), “Pirates for All Eternity”. I don’t want to spoil the fun, but there’s a great sailing journal that involves battles at sea, skeletons, and even a massive Kraken! If scary sea monsters isn’t your jam, there is a nice recipe for Trutle Sup – a pirate dish that, of course, includes a heaping helping of lard.

The book itself is presented as a shelf-worn, well used leather bound book. Featuring the Sea of Thieves skull on the cover, the edges are bound and embossed with gold embellishments on the edges, as you might find on books from the time. It is, however, much smaller than the usual fare from Titan. At just 7.2 x 0.8 x 9.3 inches, it makes some of the pages feel like they could use a bit more size to appreciate the artwork, but it does keep with the idea that this is, in fact, a real ship’s rutter.

Tales from the Sea of Thieves

Author Paul Davies has done a masterful job of translating a game with no defined main story arc into an entertaining and fun adventure book. The 160-page book does have a few hiccups that can’t be ascribed to pirate speech, but overall it’s a fun romp from start to finish. If you are a fan of Rare’s recent seafaring adventure, it’s easy to recommend as a companion piece.

Ron Burke is the Editor in Chief for Gaming Trend. Currently living in Fort Worth, Texas, Ron is an old-school gamer who enjoys CRPGs, action/adventure, platformers, music games, and has recently gotten into tabletop gaming. Ron is also a fourth degree black belt, with a Master's rank in Matsumura Seito Shōrin-ryū, Moo Duk Kwan Tang Soo Do, Universal Tang Soo Do Alliance, and International Tang Soo Do Federation. He also holds ranks in several other styles in his search to be a well-rounded fighter. Ron has been married to Gaming Trend Editor, Laura Burke, for 21 years. They have three dogs - Pazuzu (Irish Terrier), Atë, and Calliope (both Australian Kelpie/Pit Bull mixes).
Related Articles: Tales from the Sea of Thieves
Share
Tweet
Share
Submit