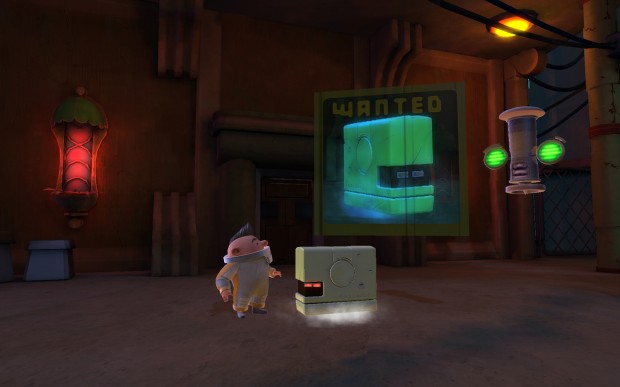 It’s a tale as old as time itself.  You are a pilot, docking at a space station, dropping in for some fuel. As you are heading to security, an alien named Junker absconds with your suitcase.  Now it’s up to you and your newfound sentient luggage case (that follows you around like a pet) to solve two-person puzzles to recover your stolen property.   I mean, we’ve all been there, am I right??

Frontier Development (of Elite: Dangerous, Zoo Tycoon, and several Rollercoaster titles fame) and Amazon Game Studios have partnered up to bring their first showcase title for the Kindle Fire to life, entitled Tales from Deep Space.  Tales from Deep Space are the misadventures of a traveling salesman named E who, when he sets down to make some sales and refuel on a space station named Big Moon, ends up having his suitcase nabbed.  As the whole station goes into lockdown, it’s up to you and CASI (it’s actually a “Combat Assured Secure Inventory” drone, but it kinda looks like an old ATX computer tower) to help you recover your suitcase in the middle of an uprising of the cyclopean “Meeks” that inhabit this station.  It’s a little wacky, and that’s just how I like it.

The biggest surprise here is the production value.  We live in a world where most apps are just recycled ideas stuffed to the gills with microtransactions and limited entertainment value.  Tales from Deep Space rings in at $6.99, and it easily earns every penny.  The game is equal parts simple platformer and two-person puzzle game, asking you to flip switches and open gates, as well as make a few leaps and climbs.  If you’ve ever played Little Big Planet, you have a good idea of what I’m describing.

Utilizing the touch controls of the Fire, the game is simple and intuitive, leaving it accessible for kids and adults alike.  Dragging your finger out from E or CASI will draw a dotted line, indicating the direction you’d like them to travel.  For the most part, they’ll “figure out” what you are trying to get them to do, whether that be climbing, jumping, or running through the space station.  Since they both run at the same pace regardless of how far you draw out, you can easily keep your hands out of the way of the beautiful stylized artwork Frontier has brought to the table.

Eventually, as the station gets locked down and the Meeks begin their uprising, you’ll get into the combat portions of the game. Thankfully, it’s as approachable as the control scheme.  Tapping in the direction you wish to shoot fires shots from E’s pistol, while CASI pops open to reveal fists of fury that he can unleash on foes at close range.  None of it is gruesome, with Meeks coming apart more like LEGO characters — there is nothing here that’ll make a parent raise an eyebrow.

While there is very little spoken dialogue throughout the game, there is a great deal of comedy here.  Characters emote and interact in cute and creative ways, not unlike the aforementioned efforts from TT Games and their LEGO properties.  It’s all very tongue in cheek and a lot of fun.

A quick stop for a refuel and suddenly BAM! Mayhem!

There are quite a few collectables in Tales from Deep Space.  There are 20 Rock Fleas to exterminate, 20 DataCubes to find, and three very large game areas to explore.  You can also collect Meeklets (they look like little crawling eyeballs that might have popped out of the cyclopean Meeks that run the station) from the Meeks you shoot or punch.  The collectables are optional, but they’ll keep you coming back and exploring every little nook and cranny of the game space.

Surprisingly, Tales from Deep Space supports multiplayer.  Having a second Kindle Fire tablet enables gamers to play the game cooperatively.  I don’t have a second Fire, but supposedly a second player (local co-op only) can take control of CASI to help with puzzle solving.  It is a surprising addition, and one they could have easily overlooked and still had a great deal of success with this title.

If there is one negative I can find, it’s the platform.  The game only works on the Kindle Fire tablet. This means you can use it on the Kindle Fire HD and HDX – essentially the most modern of the device platforms.  When you take a look at how buttery-smooth the framerate is and the speed at which the game loads, it’s very clear where all that memory and processing power is going.

Summary: Tales from Deep Space is a charming title, appropriate for kids and adults alike. Local cooperative play (if you have a second Kindle Fire) is a nice addition to a very long list of fantastic features. The whole thing is wrapped nicely in a beautiful graphical package, enticing to any Kindle Fire owner. If they wanted a killer app to sell the idea of Amazon Game Studios, they’ve got it.

Ron Burke is the Editor in Chief for Gaming Trend. Currently living in Fort Worth, Texas, Ron is an old-school gamer who enjoys CRPGs, action/adventure, platformers, music games, and has recently gotten into tabletop gaming. Ron is also a fourth degree black belt, with a Master's rank in Matsumura Seito Shōrin-ryū, Moo Duk Kwan Tang Soo Do, Universal Tang Soo Do Alliance, and International Tang Soo Do Federation. He also holds ranks in several other styles in his search to be a well-rounded fighter. Ron has been married to Gaming Trend Editor, Laura Burke, for 21 years. They have three dogs - Pazuzu (Irish Terrier), Atë, and Calliope (both Australian Kelpie/Pit Bull mixes).
Related Articles: Tales from Deep Space
Share
Tweet
Share
Submit