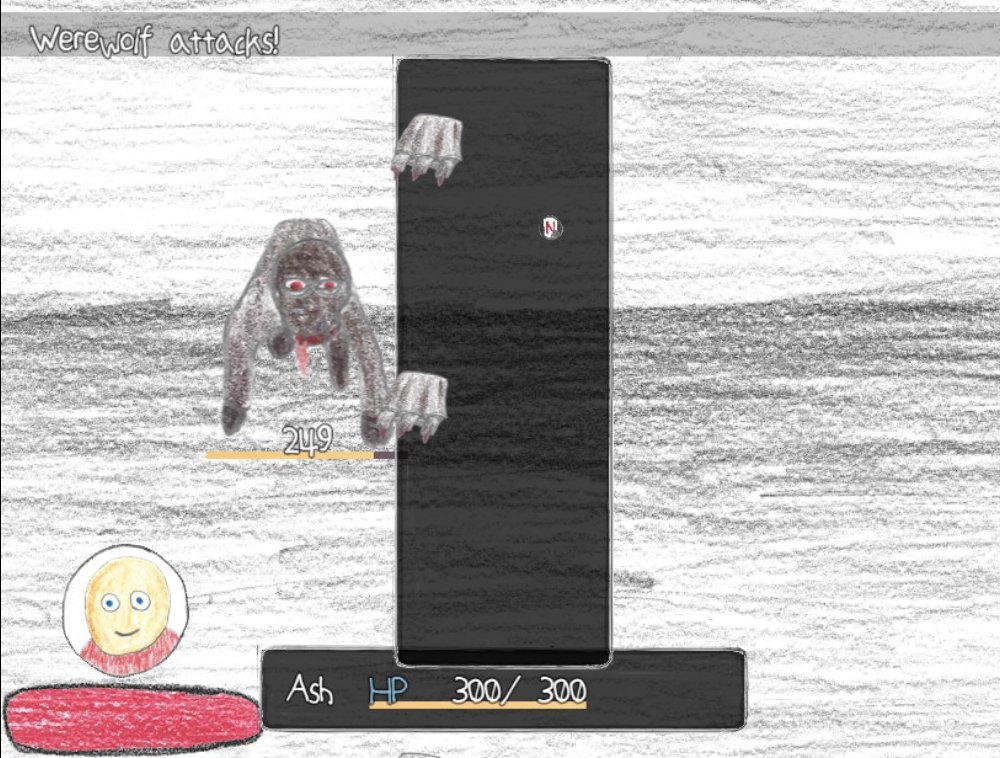 I guess I should address the elephant in the room: Nepenthe takes major inspiration from Undertale, and it ends up being half as competent as its source material. An ambitious first effort from indie developer Yitz, Nepenthe takes the RPG morality system and attempts to create a fresh new take on it. However, while it does have some unique art direction and serviceable soundtrack, the derivative gameplay and light amount of content make this game sadly middling in its execution.

Nepenthe puts you in control of a nameless, bald person as you traverse a mysterious land looking for answers regarding your amnesia. Along the way, you’ll meet different characters that will either embrace or destroy you depending on your actions, and you can affect the overall atmosphere with them. There are three different endings you can get, and it’s worth a replay or two to see the true story unfold.

The main gameplay mode acts like a turn-based RPG where you attack by pressing the Z or X keys based on timing; the more you press correctly, the more damage you can give. During enemy turns, you’ll need to dodge incoming fire à la shoot-em-up bullet hell gameplay. Sound familiar? The gameplay is almost a carbon copy of Undertale’s: The system feels derivative and competent at best, a rip-off at worst, and the results are rather mixed. The “timing-attack/dodging-defense” method works well enough, but it doesn’t help shake the feeling that better gameplay exists.

The battles themselves aren’t terribly difficult, and as a result, I didn’t really feel challenged during my playthrough. While Undertale is a rather easy game (sans one or two examples), there were still some innovative and challenging battles within the main story. The combat is too simplistic to really make its mark, and it comes off as somewhat underwhelming. That being said, initially, there are two modes that you can change in order to make the battles slightly easier, so if you want to ignore the action bits and get straight to the story, you can.

Of course, if the story and presentation are good, the gameplay can be forgiven for its faults. The rest of Nepenthe is all over the place, however; The story, while admittedly heating up near the end, is an overall disappointment. The characters and writing are very one-note, and most of the “funny” jokes regarding the story are very flat and generic. Imagine a dad joke so corny you’d roll your eyes; now multiply that by a hundred, and you have Nepenthe’s humor. (To the game’s credit, there were a couple of jokes I legitimately chuckled at, but that’s pretty much it.) Additionally, it’s riddled with small typographical errors, which while not a dealbreaker, can be annoying.

I admit, I did chuckle at this though.

Oddly enough, I found that the handling of the story’s main inspiration (i.e. an Undertale clone) was uneven; in Undertale, you can beat the game entirely without killing a single monster, but here, you’ll have to destroy at least a couple of dastardly foes in order to get the best ending. To be fair, this game didn’t have a mercy option originally, so this negative can be downplayed a tad. That being said, there are a couple of characters (particularly Mo, a seemingly random NPC with a significant role later on) that do elevate the story and will be your saving grace should you end up replaying the game. The game itself is $4.99, and while only lasting a little over an hour, does have some replay value thanks to multiple endings.

While the story and gameplay are rather middling, the presentation is surprisingly great. The graphics are simple and feel like a six-year-old drew them, but for some reason, it gels pretty well. It has this stylistic art direction that wouldn’t work in most other games, but it manages to capture the childlike passion in those drawings, kind of like how the animated kids’ show Chalk Zone uses rather mundane drawings and makes an imaginative world out of them. The characters move awkwardly, but it really pops throughout gameplay, and the movement cycles are fluid and unique.

Finally, a strong point of Nepenthe is its soundtrack. While there are a few generic piano tracks on a loop, the scored tracks with guitars in them are pleasing to the ear, and I would stay a minute or two on a screen just to listen to the mellower tracks. There’s also one enemy battle with a fully voiced song in the background while fighting, and this was probably my favorite moment in the game. If it were up to me, I’d just ditch the ominous pianos and keep up the acoustic guitar rhythms.

The song during the Solider battle was an absolute banger, not going to lie.

Nepenthe is half as good as its source inspiration, and while it’s still in need of much more improvement, it is an ambitious first effort. While it suffers from derivative gameplay and a shallow story, it does have a unique presentation and some fine music.

Elisha Deogracias is an aspiring accountant by day, freelance writer by night. Before writing for Gaming Trend, he had a small gig on the now defunct Examiner. When not being a third wheel with his best friends on dates or yearning for some closure on Pushing Daisies, he's busy catching up on shonen manga and wacky rhythm games. Mains R.O.B. in Smash. Still doesn't know if he's a kid or a squid.
Related Articles: Indies, Nepenthe
Share
Tweet
Share
Submit