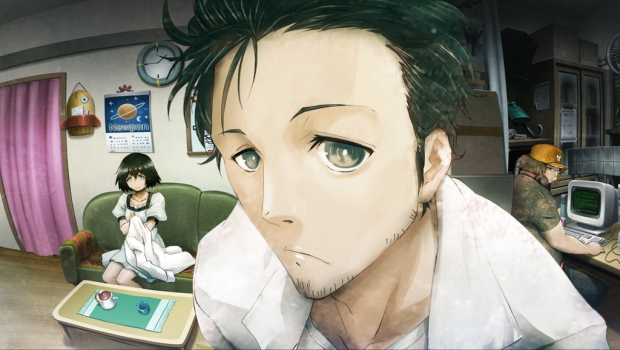 Everyone has that moment in their life they wish they could undo. It can be as major as burning that final bridge with a friend or as minor as not going to the store that one day. It’s often ambiguous, and you think that you can pinpoint the exact point where things changed. Often you’re right, but often you don’t realize how drastic the changes from there will be. It’s the Butterfly Effect, a theory not uncommon to gaming, yet few stories tell it as well as Steins;Gate.

Originally a PC visual novel, Steins;Gate has finally been ported to the PS3 and Vita for American audiences. It is the story of Okabe Rintarou, a young genius with a mind for conspiracies and delusions of grandeur, and his quest to be the world’s greatest mad scientist. It’s the story of the trials and tribulations of those around him, each dealing with their own personal struggles, keeping face in a world going slowly mad. But mostly, it’s the story of a microwave that can transmit texts to the past, and the implications that device has in each character’s life.

Most of Steins;Gate plays out in text windows, with occasional text messages to break up the conversation.

Told in standard visual novel format, Steins;Gate is a significant amount of reading, occasionally broken up by text messages and emails, or by branching choices you can make. It’s a notably long one as well, with a likely clock time of anywhere from 30 to 40 hours to see everything Steins;Gate has to offer across the multiple routes and endings. As a PS3 title, it’s a little hard for me to imagine sitting down on my couch and turning on the big television for a good long bout of reading.

Yet the Vita is an entirely different story. Steins;Gate maps perfectly to the Vita in every way, through a natural implementation of its user interface and in sheer form factor. Steins;Gate is like a novel you keep by your bedside, gradually picking away at it every night for several weeks, and in that manner it’s perfect for any Vita owner who wants a go-to relaxation title.

Characters like Suzuha have innocent appearances, but there’s much more to them than meets the eye.

From aesthetic to character design to writing style, Steins;Gate maintains a cohesive mood, composed of both techno-futuristic designs and dystopian despair. Colors are washed out and greyed, yet some shots let colors spring to life, especially in the eyes and hair of certain characters. The design of each character in some way informs you of them – for example, Kurisu wants to be seen as respected among her peers despite her age, so she wears a baggy jacket too large for her.

As you progress through Steins;Gate, you’ll come to terms with each character and their insecurities. As Okabe discovers the power of his accidentally created time machine, each person sees a way to right some wrong in their life. Some are small, some are drastic, yet each takes part, and when the ever-predictable twist of Unforeseen Consequences comes, you’ll sigh and wonder why they thought this was a good idea.

But it’s once those consequences hit that you begin to realize the attachment that Steins;Gate’s cast holds to you. Daru, the endearing otaku hacker; Mayori, the prodding companion who’s always smiling and encouraging; Kurisu’s distant-yet-caring gaze; Suzuha, the girl-next-door with a heart of gold and carefree attitude. When eventuality comes and you must attempt to undo all you’ve achieved, it’s heart-wrenching to try and find a way to stop the horrible timeline of Unforeseen Consequences from happening, yet still give each character the happiness they search for.

Choices have serious consequences, as there’s a total of six endings to find throughout the game.

Steins;Gate still finds the smiles and laughs though, and it manages to tread the line of “enough” and “too much” otaku culture well. It can be difficult early on to keep up with the plot, due to both the intentionally-cryptic nature of the game’s opening chapters and the constant use of several different nicknames and aliases by the main cast, but it’s never unmanageable, and many of those “pet names” have quite the emotional tie by the end of the story.

When I finished Steins;Gate the first time, I immediately wanted to dive back in and see more. When I finished the True End, I felt emotionally drained but rewarded with an incredible story of love, time travel and happiness. This third time around, I’ve been taking it slower, enjoying the nuances and clever foreshadowing and callbacks each route has.

This is a game for those who love to lie down at night and read a bit before turning out the lights. It’s for those who are intrigued by the idea of a time travel story done right, and not put off by the potential word count ahead of them. I can’t truly guarantee everyone will enjoy starting Steins;Gate, but color me surprised to find anyone who won’t enjoy completing it. A touching love story, a time-travel thriller, and a suspenseful conspiracy tale all wrapped up in one package, Steins;Gate is a definitive title of the genre for good reason.

Steins;Gate is a complex visual novel with a costly time commitment, but it offers one of the best stories on the Vita. Beautiful aesthetics, excellent writing and intricate character design accentuate the story’s strength in ways only a visual novel could. There’s a reason this is at the top of every Recommended Visual Novel list - this is a de facto title of the genre, worth your time and interest.