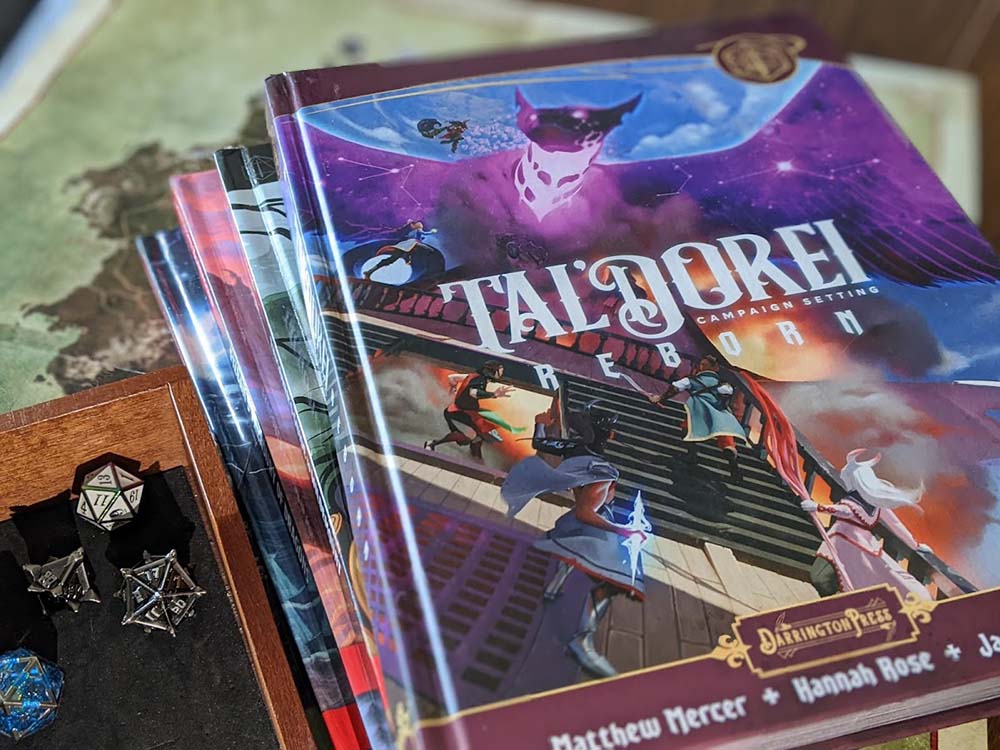 First off, the book itself. While Tal’Dorei Campaign Setting Reborn has 280 pages, the pages themselves are of a higher quality and weight than most other D&D books–meaning that it is thicker than the Monster Manual, which contains 350 pages. Tal’Dorei Reborn is just shy of 1” thick, while the Monster Manual measures just over 0.75”. At just under 9” deep, this book is also thicker than most D&D books, which come in at an even 8”. 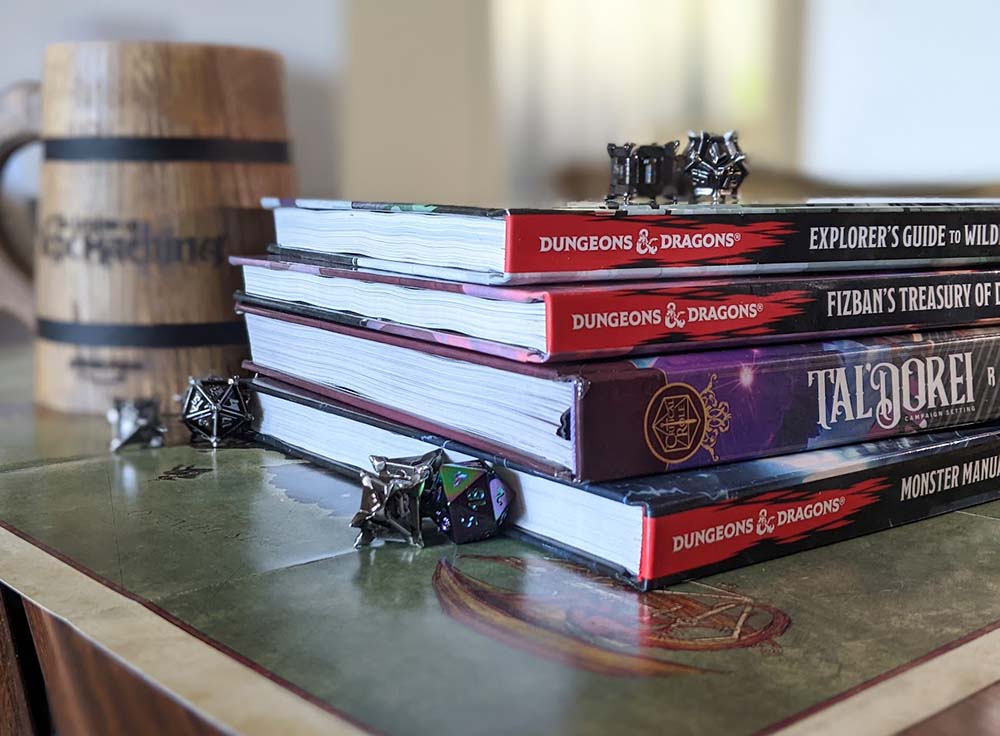 You can quite easily feel the quality of the pages, they are thicker and more stable, less likely to crease or tear if you find yourself flipping quickly through it. The original campaign book contained an array of mostly fanart which was of a varying quality. While it was inspiring to see the work of passionate fans highlighted in an official book, many couldn’t help but wish for a little more consistency. Tal’Dorei Reborn more than delivers in this department, and the higher-grade paper only improves the quality of the plethora of artwork within. From filler art to maps to full-page splashes, everything is bold and beautiful when it should be, and grim and gritty when it shouldn’t.

The inside front cover has a triangular pocket which contains a 23”x18” fold-out map, meaning you can just slip it out; there are no perforated lines to tear along, nor residue sticking it to the book itself. This single-sided, full color map contains a number of notable locations, from Emon to Westruun, the Briarwood Timberland to the Frostweald, and the neighboring continent of Wilemount as it reaches off the edge of the map. There are also a number of notable new locations, including Niirdal-Poc, created by Aabria Iyengar during her time as Critical Role DM in Exandria Unlimited. It’s the first hint that the world of Tal’Dorei has not been static over the last five years. 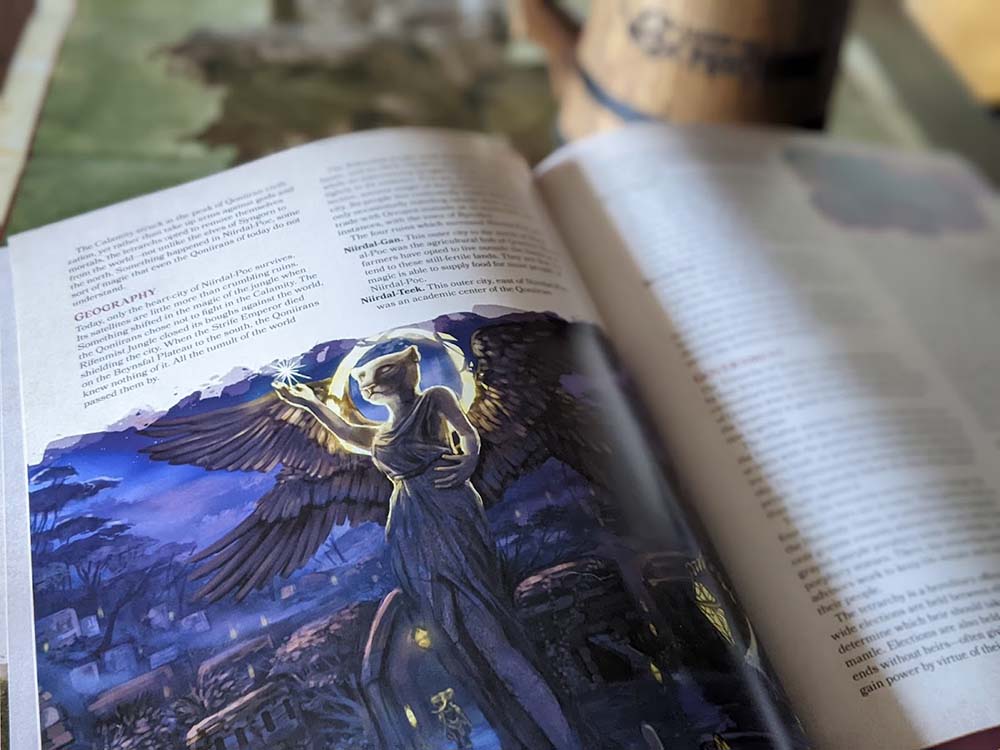 Before we dive in further, It is worth noting that this is a campaign setting, and as such it does not contain any pre-made adventure modules. Its intent is to give the history, tools, and resources to run a game inside of Tal’Dorei, but if you need inspiration you can draw from the two completed campaigns, the current campaign, or the animated series. If you’re truly set on the need for a pre-made campaign you’re in luck! Critical Role: Call of the Netherdeep hits shelves next month and should fill that need.

What you will find in this book is a whole lot of history, myth, politicking, factions, and the kind of lore that has actually been pretty light in most 5e books. While lore this dense could be seen as oppressive or overwhelming for newcomers in another setting, most fans of Critical Role already have a basic understanding and vocabulary around the peoples and powers of this world – the Calamity, the Betrayer Gods, the Tal’Dorei Council, the Ashari, etc, which means that many players are likely be excited to learn more about how all of these stories and entities fit together. It’s an incredible resource for anyone looking to run a more political game, where the really important battles are won via knowledge of history, religion and alliances. It even features the Exandrian calendar: 11 months, the number of days in each month, major holidays and when they are celebrated, and a brief guide on how to use said calendar, if you wish to do so. 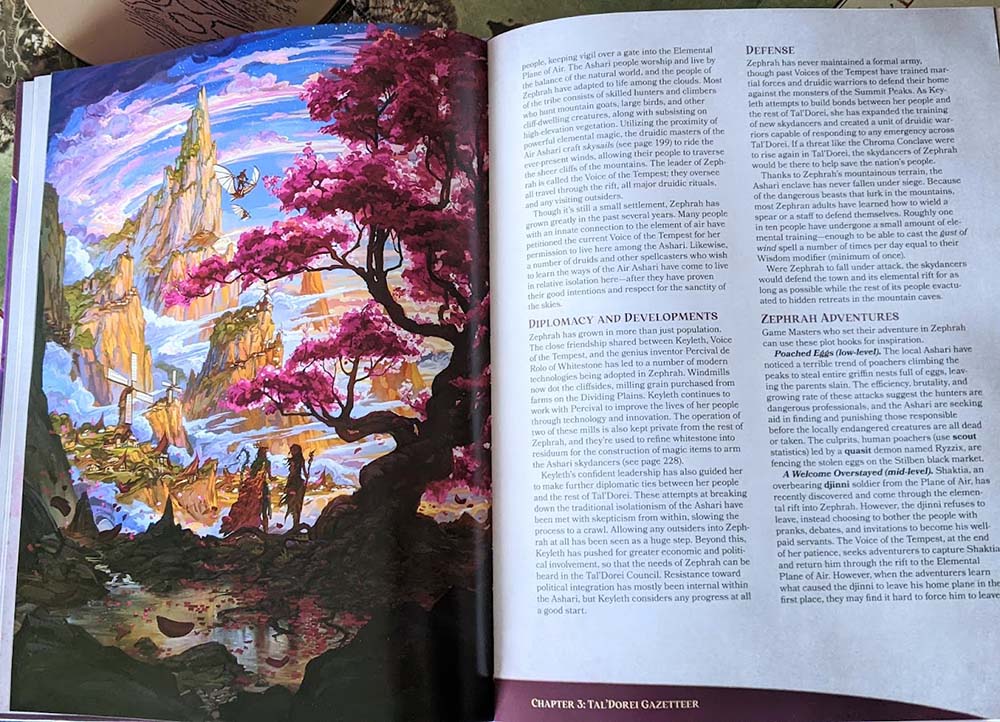 Tal’Dorei Campaign Setting Reborn dedicates a full 80 pages to locations within the continent, ranging from small towns, major metropolises, and regions within the kingdom. Information is provided around the major faiths, imports and exports, government and diplomacy, crime, and even population counts for towns and cities which include a percentage breakdown between the major races found within each location. Maps of regions and cities are included, though perhaps no city has quite the same care given to it as Whitestone. The city has grown dramatically since the publication of the first Tal’Dorei book, and Whitestone now features familiar places of interest, such as the Sun Tree and the Slayer’s Cake Bakery, as well as a number of new and touching places of note, such as the Snowdrop Memorial Trail and Lord Trinket’s Public Park.

The character options section is robust, providing the history of the various races without boxing player characters into strict adhesion to that race’s history. This section even dives into the unique relationship between the two Dragonblood subraces, the Draconians and the tailless Rvenites, and how their situations have changed since the events of the Vox Machina campaign. Available races include Fribolgs, Goblinkin, Half-Giants, and more. 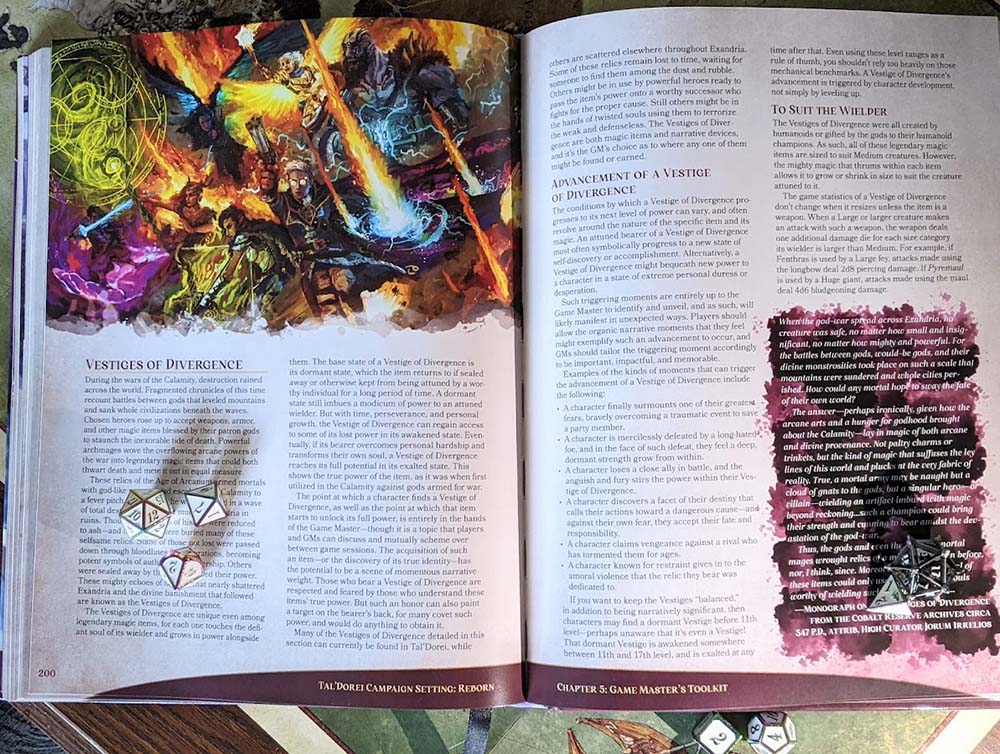 This book also has a section dedicated to Hemocraft, and features two sub-classes created by Matt Mercer which focus on the use of blood magic: the Blood Domain Cleric and the Blood Magic Wizard. We see some familiar subclasses from Campaign 2, such as the Oath of the Open Sea Paladin and the Way of the Cobalt Soul Monk, as well as the class of the much-beloved Gilmore, the Runechild Sorcerer, and more still. Backgrounds include the Ashari, a Clasp member, and a Whitestone Rifle Corps, which offers proficiency with firearms, though it is worth noting that this section lacks a Percy-styled inventor gunslinger subclass.

Rounding out the Character Options section, Tal’Dorei Campaign Setting Reborn offers game masters the option to bestow the Fate-Touched supernatural blessing upon a player or NPC, as well as a host of new feats. Some of these feats are wonderfully mechanical, such as the self-explanatory Thrown Arms Master or the Flash Recall feet which allows a spellcasting class with prepares spells to use a bonus action swap out one of their prepared spells for another out of their spellbook or class spell list, while others, such as the Cruel feat, are deliciously narrative. Characters with the Cruel background gain access to d6 cruelty dice, a delightful counterpart to a fighter’s superiority die, which can be used to deal extra damage, regain hit points on a critical, or to up an Intimidation roll. We also find Vital Sacrifice, a feat tied into Hemocraft, which allows a character to shed their own blood in order to gain advantages in battle. 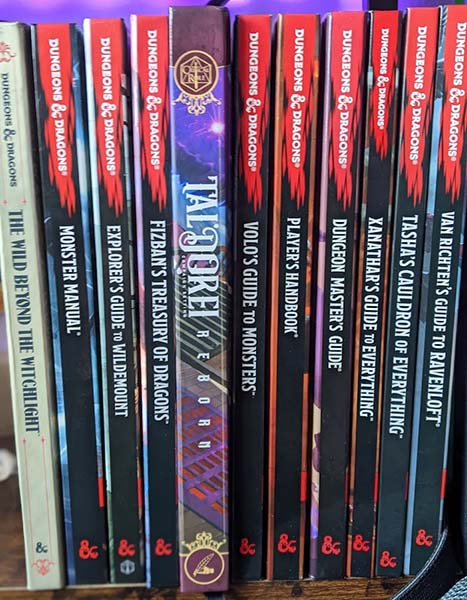 The Game Master’s Toolkit contains a good bit of DM’ing advice around creating good conflict, how to reward characters, and crafting an all-around memorable campaign before diving into perks and challenges specific to Exandria. Here you’ll find various magical items and treasures found in Tal’Dorei, and two pages dedicated to items and tools created by the Ashari. That’s when we come to the really good stuff, the stuff every Vox Machina fan wants: a full ten pages detailing the Vestiges of Divergence, their histories, and their benefits in their Dormant, Awakened, and Exalted forms.

The final 58 pages are dedicated to the allies and adversaries found in Tal’Dorei, and here you find artwork, stat blocks, and informational text all mingling. This section is a true delight for the game master who doesn’t just want to throw a random band of frenzied warriors at their party, but rather want to know why this group of warriors are attacking people, who they serve, and how they tie into the overarching story in Tal’Dorei. Oh, and it helps that they’re called Ravager Stabby-Stabbers, so there’s no way that the party will take them seriously until they’re in big trouble. That’s just pure fun for a GM. 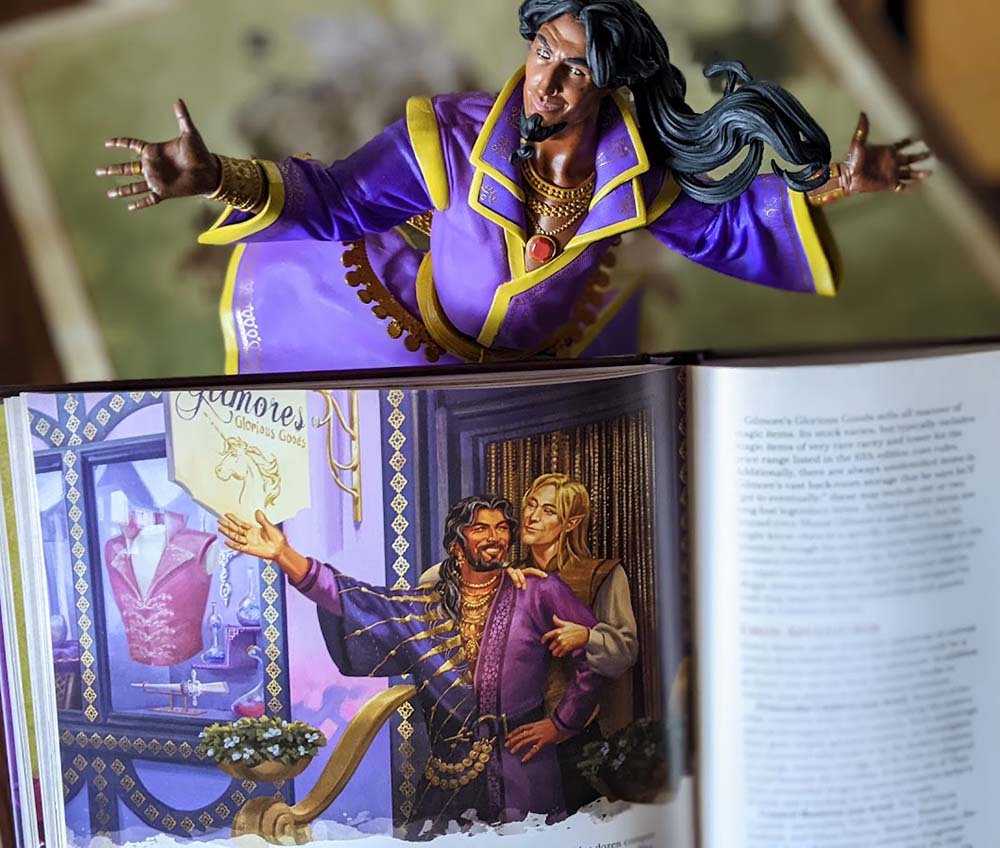 While there are a number of monsters, cultists, and other various baddies ready for you to drop into your campaign, it would have been nice to see some of the minor or memorable NPCs who would make great quest givers, allies, or companions for a new party in Tal’Dorei. While there would likely be possible complications around bringing guest characters such as Kashaw Vesh, Zahra Hydris, or even the infamous Arkhan the Cruel guest in, there are plenty of other characters who could deliver a solid plot hook. Stat blocks and tips for playing Kynan Leore, Kaylie, and Gilmore would be a wonderful addition to any adventure.

Pages 260-275 are dedicated to Vox Machina themselves, providing stat blocks, should your party be foolish enough to try and pick a fight with the heroes of Tal’Dorei, but also a glimpse into their lives in the 20 years which have passed in the world of Exandria since the end of Campaign 1. Some of them aren’t entirely surprising, Perxy and Vex have built a family and a legacy that will long outlive them both, some of them are achingly tragic, such as the fact that the Champion of Ravens is not Vax, though Vax resides within him, and others are… somehow both surprising and unsurprising at once. The union of Pike and Scanlan was apparently unable to stand the test of time, but I can’t help but see this section as the start of their child Wilhand’ildan’s villain arc. Also, Scanlan now has a mustache and it’s just as terrible as you might imagine. 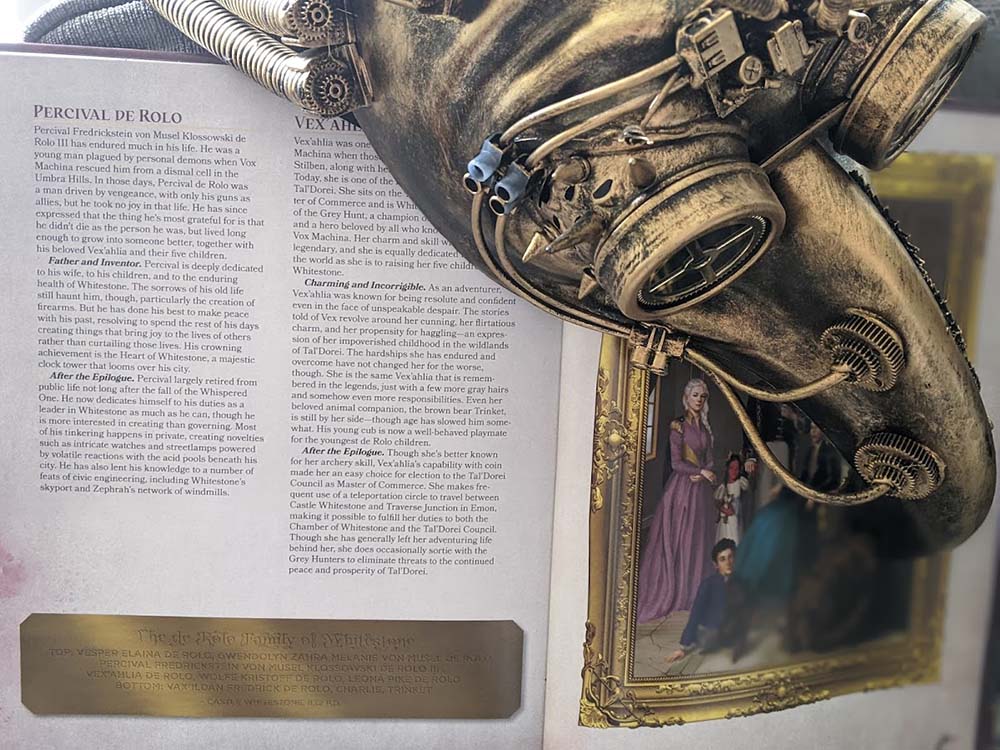 The Tal’Dorei Campaign Setting Reborn is a great tool for anyone looking to run a game within Tal’Dorei. There has been real love, care, thought, and craft poured into everything from political systems to locations to maps, and the book itself is high quality and simply bursting with impressive artwork. Critical Role fans will be excited to play some of the subclasses featured in the stream, and to learn more about Matthew Mercer’s Hemocraft magic. Fans will also be delighted to learn more about what the Vox Machina crew has been up to post-campaign, as well as how the world of Tal’Dorei has changed over the last 20 years. While all of this is nice, it’s really the deep dives into the politics and the religious history of Exandria which make this book stand apart from other fifth edition books. Anyone looking to play a political game full of secrets, espionage, and treaties will find a wealth of information and tools to make great use of. Tal’Dorei Campaign Setting Reborn is available now at Darrington Press as well as the Critical Role Shop.

Tal’Dorei Campaign Setting Reborn is a must have for any Critical Role fan hoping to play in or simply learn more about Tal’Dorei. The care, thought, and thoroughness that went into this book is obvious from the high-quality paper to the robust political, religious, and socioeconomic details included for each region. While it is missing a few details which fans would like to see, it is one of the more robust source books available for 5e.