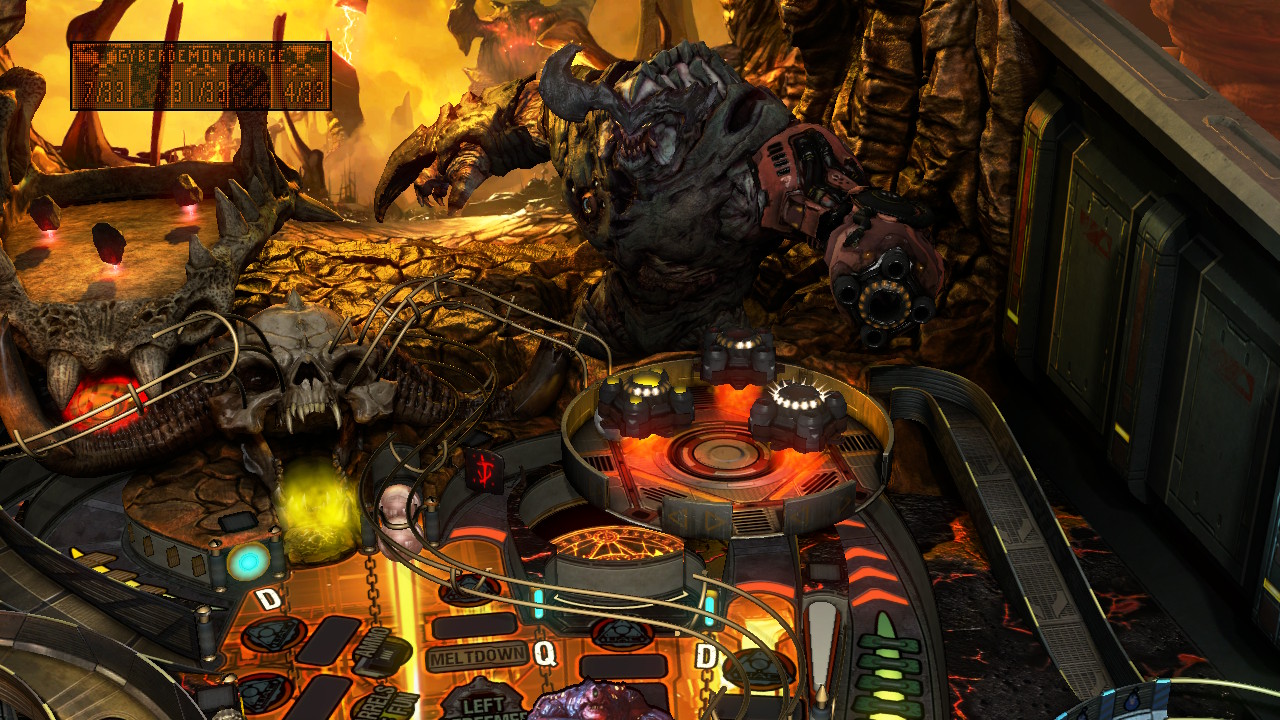 Pinball FX3 is back again with another set of fun and creative pinball tables. This new set features three games made by Bethesda: Doom, The Elder Scrolls V: Skyrim, and Fallout. Get ready to hop into a game of pinball as these worlds are brought to life.

Before getting into the specifics of each table, for those unfamiliar with the base Pinball FX3 game, feel free to check out my review for the Jurassic World pinball pack here (http://s226919.gridserver.com/feature/reviews/mr-hammond-i-will-endorse-your-park-pinball-fx3-jurassic-world-review/). Within the first few paragraphs, I go over basic information such as modes and features.

Now, to start off the fun, let’s jump into the Doom table. When starting your game, the first step will be choosing the difficulty. In a similar fashion to Doom, you can pick Hurt Me Plenty or Nightmare. Hurt Me Plenty lets you play as you would normally, but Nightmare increases the points you earn at the cost of losing various aids such as ball saves and extra balls. This is an interesting and risky choice, but if you’re feeling confident, it’s worth it to take that chance. Another aspect of the game itself is the inclusion of health, armor, ammo for weapons, and argent cells. These come into play when facing off against the enemies that appear throughout your game as a result of activating quests.

As you play, a variety of challenges can be activated that you are tasked with completing. You must shoot the ball into a skull near the middle of the table, which prompts you to select a mission to start. A few of these are Rune Trials, The Pit, and Lock ‘n Load. By shooting the ball into the left lane enough times, you can trigger a Rune Trial, which gives you an objective to complete just like in Doom’s actual rune trials. The Pit requires you to shoot the ball into lit lanes and activate switches in order to raise a circle shaped elevator. Lock ‘n Load gives you the chance to obtain a new weapon by freeing a captive ball at the back of the table. Hitting the captive ball enough times spawns a new weapon to replace your starting pistol. So get ready to power your way through hell and rack up that score.

The second table is based on The Elder Scrolls V: Skyrim. Before playing, you must choose a character to become. This includes a human knight, elf mage, argonian, and orc. You also choose an effect such as earning 10% more gold, having 10% physical resistance, or 10% magic resistance. Another unique feature is having an inventory that you can use. By holding the launch button, you open the inventory, and can change your character’s equipment, use items, and also change your equipped spell. Like in Skyrim, you also have health, magicka, and stamina bars. They will regenerate naturally over time, but hitting the left orbit or using items can help speed this up. Keeping an eye on this can help when getting into fights during your game.

The ability to complete quests is available while playing your game as well. By shooting the ball into the center cave, quests are unlocked to be worked on. Some of these quests include Explore Skyrim, Caves of Skyrim, and Dragons. Explore Skyrim allows the player to discover new places by hitting the side target banks to arrive, and then shooting the ball into the Watchtower to explore the location. If you happen to find a cave, then you will be taken to a tiltable mini playfield. You must get the ball to the exit at the bottom, and depending on which path you take, you may find gold, treasure chests, or enemies. In order to face the dragons, you need to shoot the ball into the Watchtower when the SHOUT light is flashing, and then hit the targets in the mini playfield to learn a shout. After this is done, it’s time to fight the dragon. Time to become a Dragonborn and take on the world around you.

The final table of the set is based on Fallout. Like in Fallout itself, you start off by creating a character and assigning your S.P.E.C.I.A.L. points. If you decide you don’t want to do that, you can randomize a character and use them. A companion will be chosen from a select list and will provide a bonus perk to your gameplay. There are health and radiation levels to keep an eye on as well. Once you’re in the game, the shop will become important to you. The shop allows you to heal, improve armor and weapons, and spend skill points after you’ve leveled up. Completing quests earns you experience and allows you to level up. To open the shop, the ball needs to roll down one of the shop in-lanes on the sides. Once opened, shoot the ball into the saucer to enter the shop. Take advantage of the shop when you can.

Some aspects of Fallout that show up are Factions, Vault Quests, and the V.A.T.S. If you want to do quests for a faction, you must hit a specified area before shooting the ball into the Faction Hole near the middle. Hit the bumpers for the Minutemen, the ramps for the Railroad, the right miniloops for the Brotherhood of Steel, and either orbits for the Institute. Completing all five quests for a faction aligns you with them. Hitting the gear targets at the back of the table opens the Vault Door. Launching the ball up the ramp prompts you to choose a vault to explore and begins the quest. Completing the quest unlocks a bobblehead with a perk. Using V.A.T.S. takes a lot of effort, so be prepared. First you fill the meter by hitting the top rollovers or by hitting enemies. Once filled, it can be used during fights by holding down the launch button, then selecting targets with the flippers, marking them with launch, and firing by pressing both triggers. So get ready to traverse the wasteland and take on all that stands in your way.

All three tables have clearly been made with plenty of love and attention to detail. They are unique and each table feels different than the others. The effort to make each table feel like the game they’re inspired by, both visually and with the inclusion of features from their respective games is appreciated. Some of the mechanics and methods of completing missions are complex, but that adds an extra layer of challenge to the gameplay. If you’re a fan of these franchises, you’ll be spending plenty of time delving into the pinball version of their worlds and enjoying every minute of it.

The Bethesda Pack for Pinball FX3 adds another set of three great pinball tables to the already vast lineup. The tables are creatively designed and the similarities to their respective games is amazing. The methods of completing missions can be complicated, but at the same time, that adds to the depth. Taking the time to explore all three worlds is definitely worth it.

Codi loves to play video games and watch movies. He will watch almost any kind of movie just to experience them. His ideas take inspiration from the shows and movies he watches, and games he plays. He also loves a good pun.
Related Articles: Bethesda Pinball Pack, Pinball FX3
Share
Tweet
Share
Submit