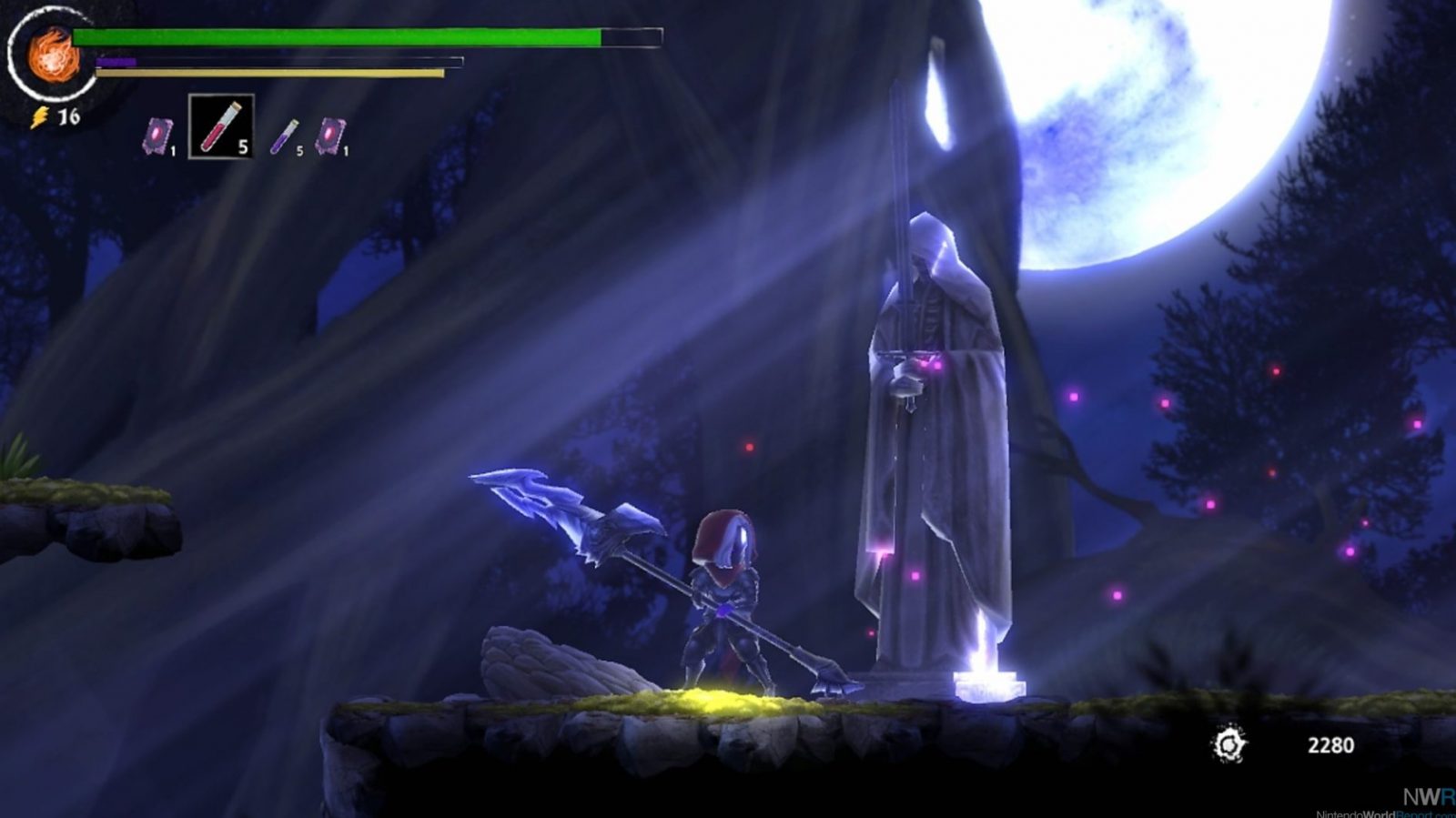 You are a nameless hero with no memory, no idea of where you are, why your identity is hidden behind a shroud, and no way to escape the bowels of the wretched place you find yourself in. If you think this sounds like the perfect storm of unfortunate events for a hero to embark on a new adventure, you’d be correct. 3000th Duel is a metroidvania style game (I don’t use this term loosely in this case), with creepy dungeons, side-scrolling-biome levels, an onslaught of attacks to unleash, and enemies that lie waiting in the darkness. This is a game that you’ll want to experience for yourself, as the game gets better and better the more you play, so I’ll spare the spoilers.

What I enjoyed most about 3000th Duel was its nostalgic approach to its story and gameplay, while mixing in important elements to make the game feel modern. Though I would have loved to feel more of a direct connection with the story, it never took away from the overall experience. It starts with your nameless hero awakening with no memory of who or where he is. And with that, you set off looking for answers in an unfamiliar world. I must admit, the game takes its time with its pacing, leveling up, weapon unlocks, and filling you in on the adventure you are embarking on; which made me question at first glance if this game was worth the trouble, but as I pressed on those doubts were soon put to rest. It definitely feels like Neopopcorn, the developers of 3000th Duel, have done this on purpose to show the clear progression of gameplay, unlockable content, and story, giving you time to settle in and experience them all. It’s not that there is a lack of story, it’s simply told in a manner where it’s difficult to tell where the beats are, as there’s little continuity as to when you are filled in. Instead, most of it is told through finding memories hidden in the world, in-game cutscenes, and by interacting with corpses. 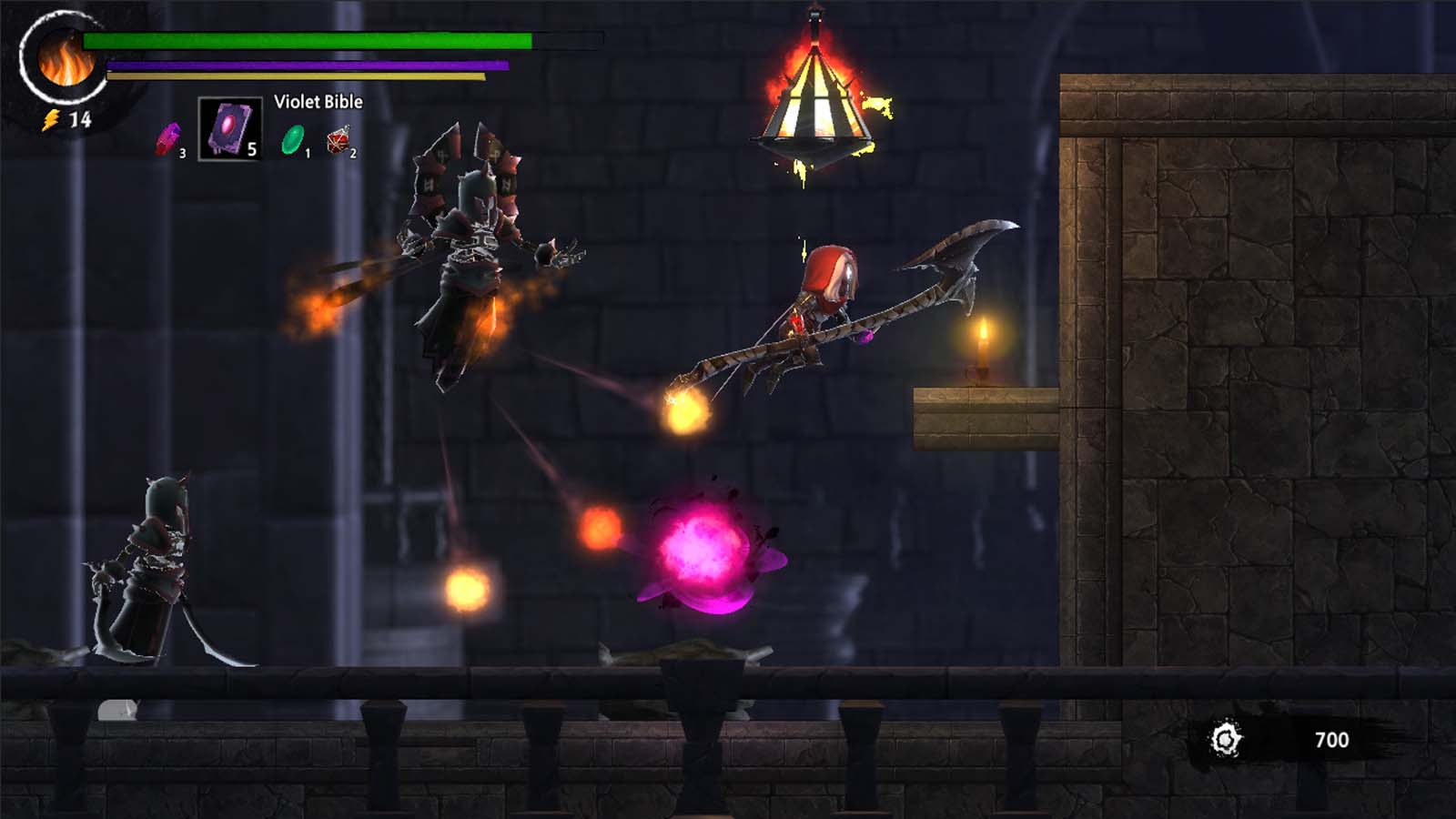 Platforming skills to pay the bills

As I embarked on the journey, I found the level design to be amazingly intricate, with platforming elements, multiple dungeons and lairs to explore, and inaccessible locations, beckoning you to revisit when you’ve gained the necessary skills. The design of the levels constantly changed, adjusting to your new-found abilities as you progressed in the game. Each level has its own unique style, usually tailored to fit the theme of the big boss that you’ll face at the end of each level. The colors, lighting effects, and art come to life as the world scrolls by from left to right, giving the sense of a vast and unexplored world in the background. The unfamiliar world is broken up into small biomes, pieced together to give the sense that the world is larger than perceived, and it works. Think of the world as a large labyrinth where some locations are accessible only by obtaining certain abilities later in your gameplay. And to give the world a deeper sense of meaning, flora is often destructible in the environments, and in some cases are used as clues to solve puzzles to unlock hidden locations.

Now what is a metroidvania style game without enemies that seem to lurk around every corner, waiting for you to enter their line of sight to pounce? The enemies are a mixture of heavies, projectile throwers, or sprinters, chasing you down, inciting fight or flight. Most enemies force you to approach them using different tactics, not because they are difficult to defeat, but because some take more damage than others. From the beginning to the end, I felt that this was the Achilles heel of the game, as the enemies never posed a threat, only being roadblocks or vessels to kill to obtain (in this case) karma points. At times, if you approach an enemy from behind or below, they will remain oblivious to your existence until attacked. This is where the immersion of the game wears thin and the frustration of wanting a challenge overrules. 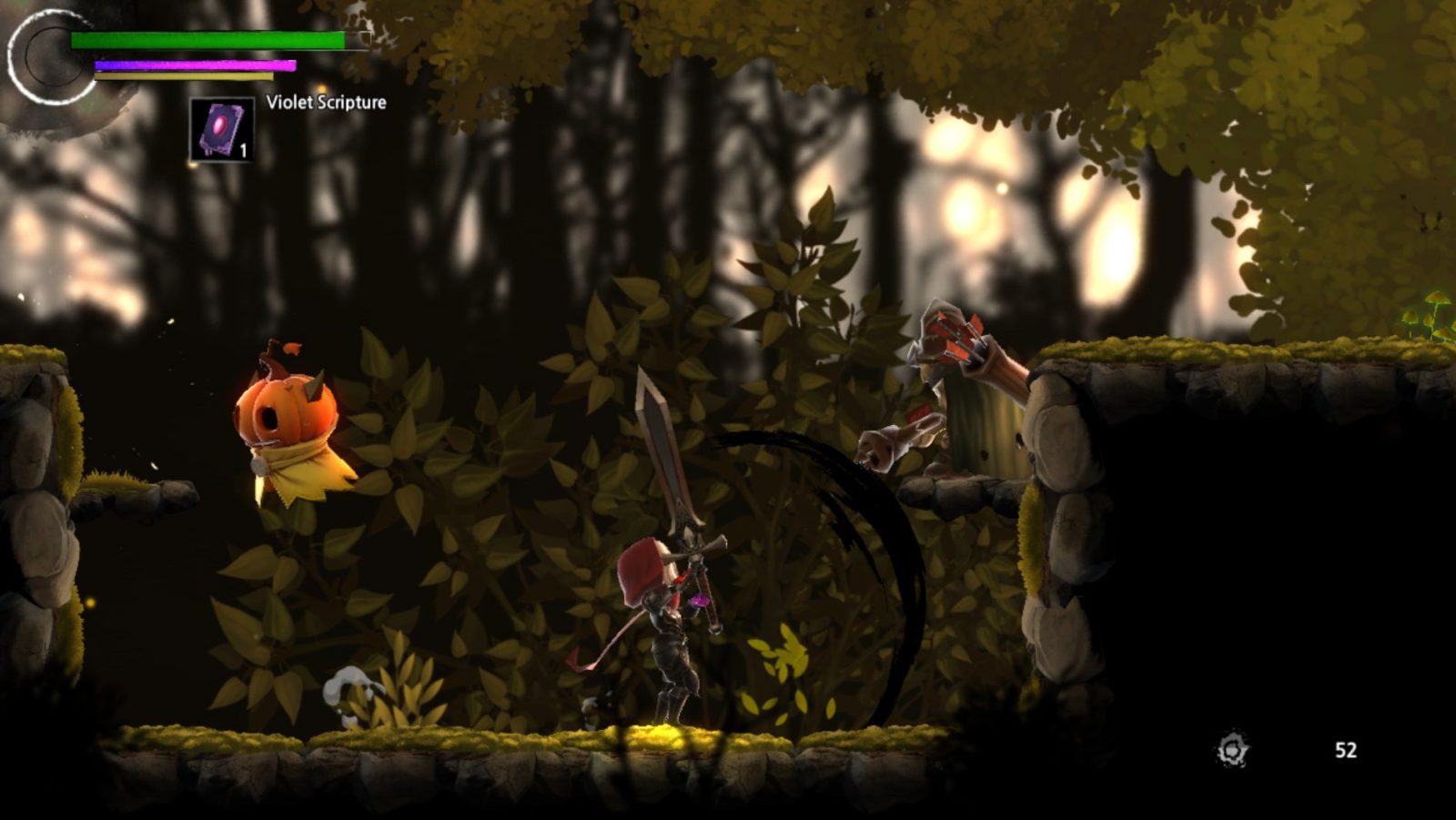 Taking on all comers

Clearing all enemies from each small biome section isn’t necessary to progress, but doing so rewards you with karma points that can be spent to level up your vitality, strength, mind (special attacks), and activity (dash), which makes this game more difficult to put down. Your stats can be leveled up at prayer statues, usually found somewhere in the middle of each level along with a save statue. You also have a skill tree that, unlike the stats menu, can be accessed on the fly via your (press +) menu. Here, you can access your equipment screen which contains your plethora of weapons that you will acquire during the game, Occult items, which are your specials obtained by defeating bosses (more on that in a moment), and accessories, items looted from chests which grant bonuses to your offense and defense. Also, in the menu is your inventory, which breaks down your character level and items in your possession, and most importantly, this is where to access the Sealed Skill tree.

The Sealed Skill tree is a massive set of skill sets for you to unlock that unlock or enhance weapons and abilities. To upgrade or unlock these skills, you must use a Seal Breaker Stone, acquired from locating hidden chests or by defeating bosses. Within the skill tree, there are subcategories that allow you to tailor how you play the game by selecting which skills you want to unlock. For me, because I found that I needed to carry one weapon with significant reach and another with devastating power, I chose to upgrade lances and axes – but your choices may vary depending on your style of play. The skill tree is where you will also level up your basic skills that will allow you to return to previous levels via teleporters to access areas that weren’t accessible in early play. 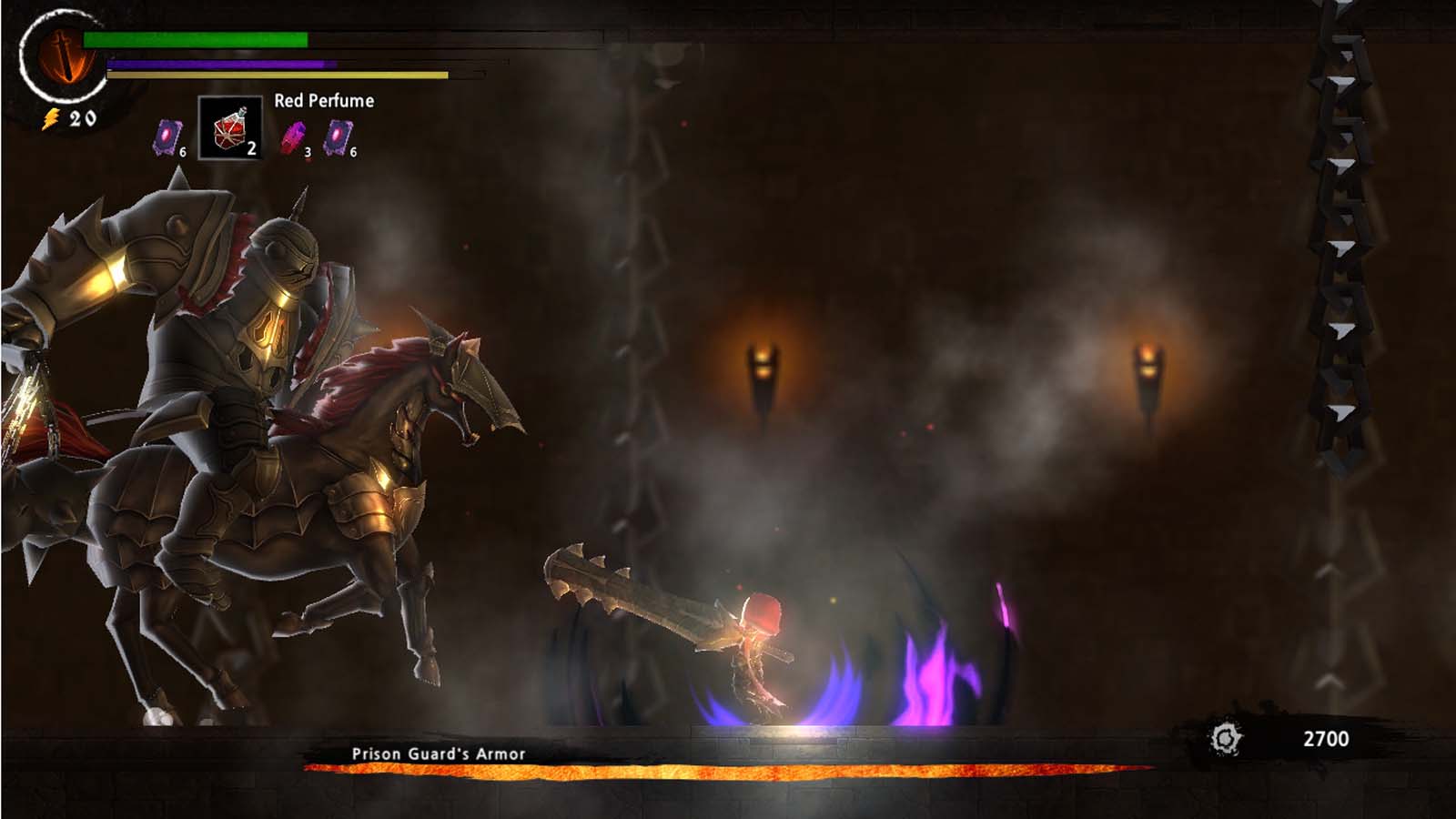 Now, where the game shines and steps into a league of its own is with its big boss battles. Designed around the type of level that you must tread through before reaching them, bosses are large, menacing, and challenge each new skill you’ve unlocked prior to reaching them. Naturally, their health is much larger than yours and, depending on the boss, they will use the very power you earn when defeating them against you. Each boss beaten will give you their special abilities that you can activate and use from your inventory. These abilities, though limited in use, can be replenished and are game changers in how you approach future boss fights.

But all the powers, abilities, and leveled up weapons cause a major problem. I found myself more often than not, overpowered and breezing through bosses, especially the enemies in the levels. Also, having access to my inventory at any time and collecting new weapons and specials from bosses, the regular enemies never felt like a threat, which made the basic gameplay of exploring the world simplistic and my character overpowered. It’s not something that’s a deal breaker, but when I beat a game, I always think of the journey it took for me to beat it and not just the moments created to stand above the rest.

3000th Duel is an amazing action-adventure game that pulls out all the stops to give us the experience of nostalgic gameplay with current videogame nuances. With a rich world to explore, visuals and audio hints that make you believe that the world is constantly evolving, and boss battles that shake you to the core, this is a must on the Switch.

T.K. is a freelance writer, narrative designer, and author. Writing and developing narratives and giving voices to digital world and characters is his passion. As a game writer, QA game analyst, and editor for Gaming Trend, he enjoys being a part of the gaming industry.
Related Articles: 3000th Duel, Indies
Share
Tweet
Share
Submit