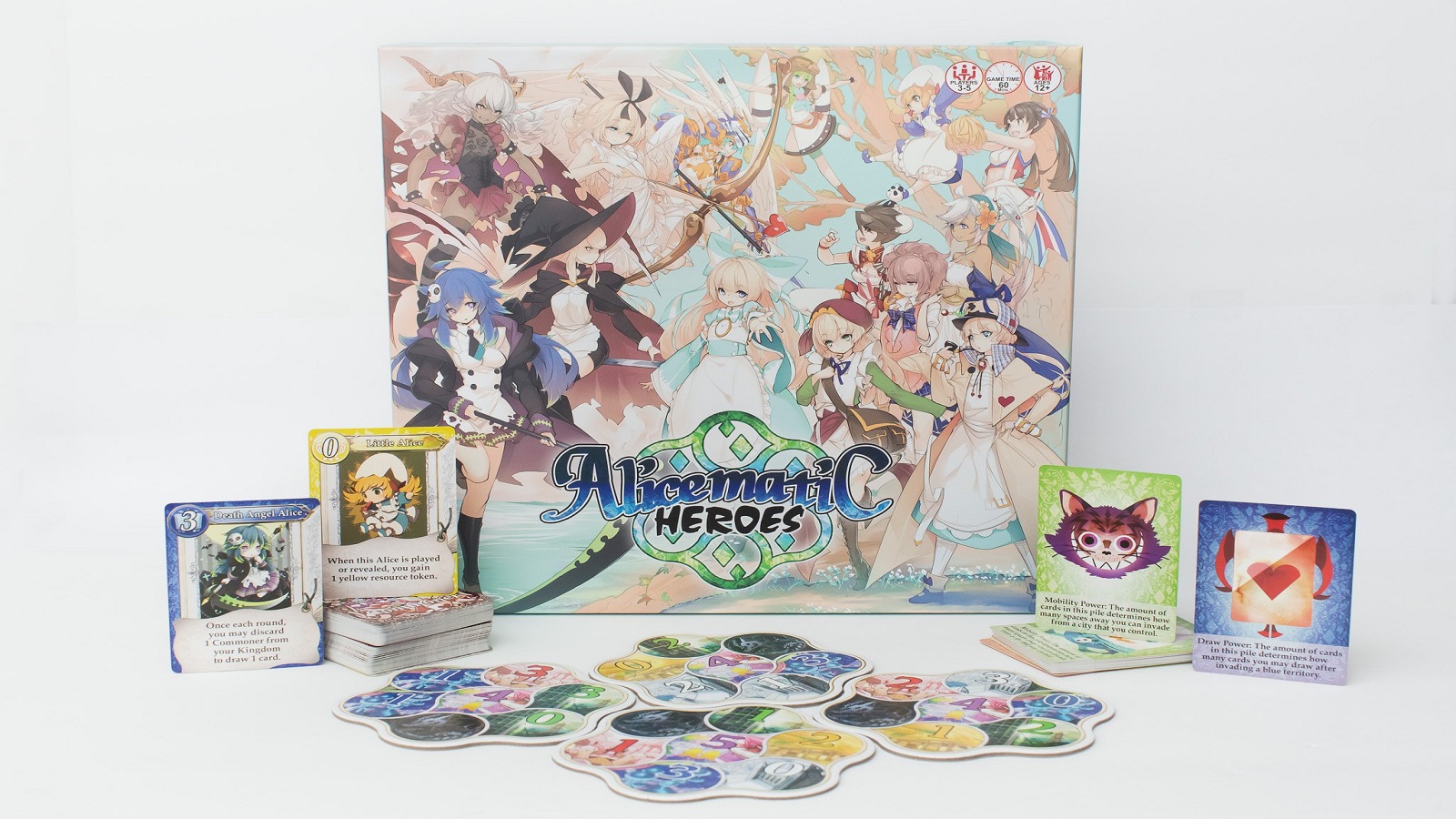 Alice in Wonderland is a tale that’s often used in a variety of media, mainly because of its sickening sweet yet surprisingly devious undertones. I do love me some psychedelic soirées, however, and Japanime Games has released Alicematic Heroes, a strategy game that allows three to five people to conquer Wonderland using a variety of different Alice types. All in all, it’s a pretty fun experience that may take a little getting used to. 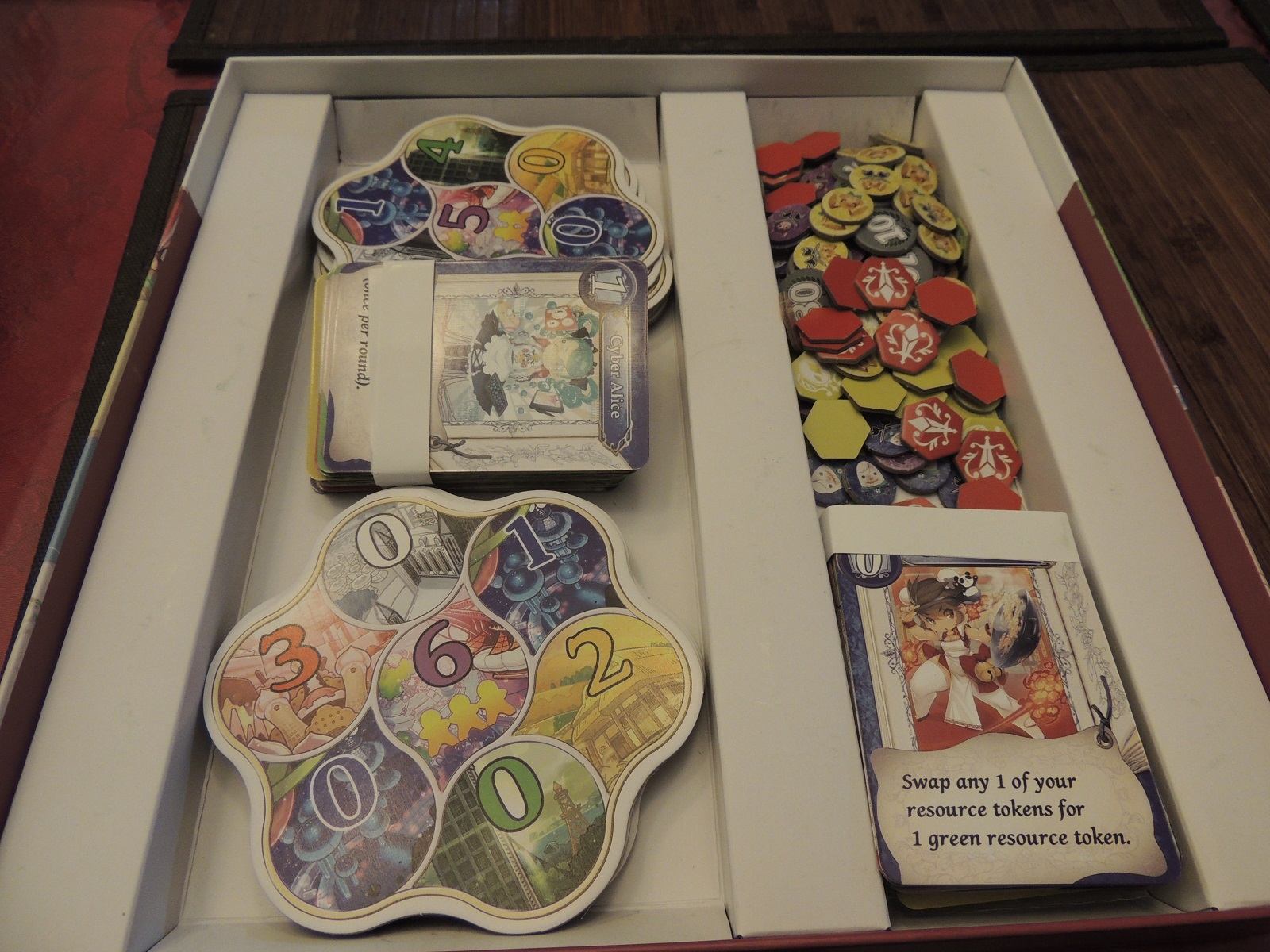 In Alicematic Heroes, nefarious creatures known as the Nothing have ravaged the world of Wonderland. The Queen of Hearts, in a desperate bid to save her land, summons different versions of Alice to save the day. While this does make the Nothing retreat into Mystic Forests, the different Alices don’t want to leave, and The Queen of Hearts decrees that they can stay and rebuild Wonderland to its former glory. This competition is determined by three to five players duking it out on a board that changes every game, with the player who earns the most victory points deemed the winner.

To begin, the board is formed out of tiles that are shuffled and placed in a predetermined mold based on how many players are in the game (with bigger player counts getting more tiles). After this, each player gets five cards and can choose two cities (middle spaces on each tile) to occupy. It’s here where the game begins, as players will have to choose different Alices to summon. There are five resources you will manage, based on color: military power (red), draw power (blue), dream power (yellow), mobility power (green), and victory power (white). Each of these resources will be strengthened based on where you play your cards. After playing one card, you’ll take one spot to attack, with the hopes of invading it. You have two phases during your turn, with every player doing these phases in order. The game lasts for 14 turns. 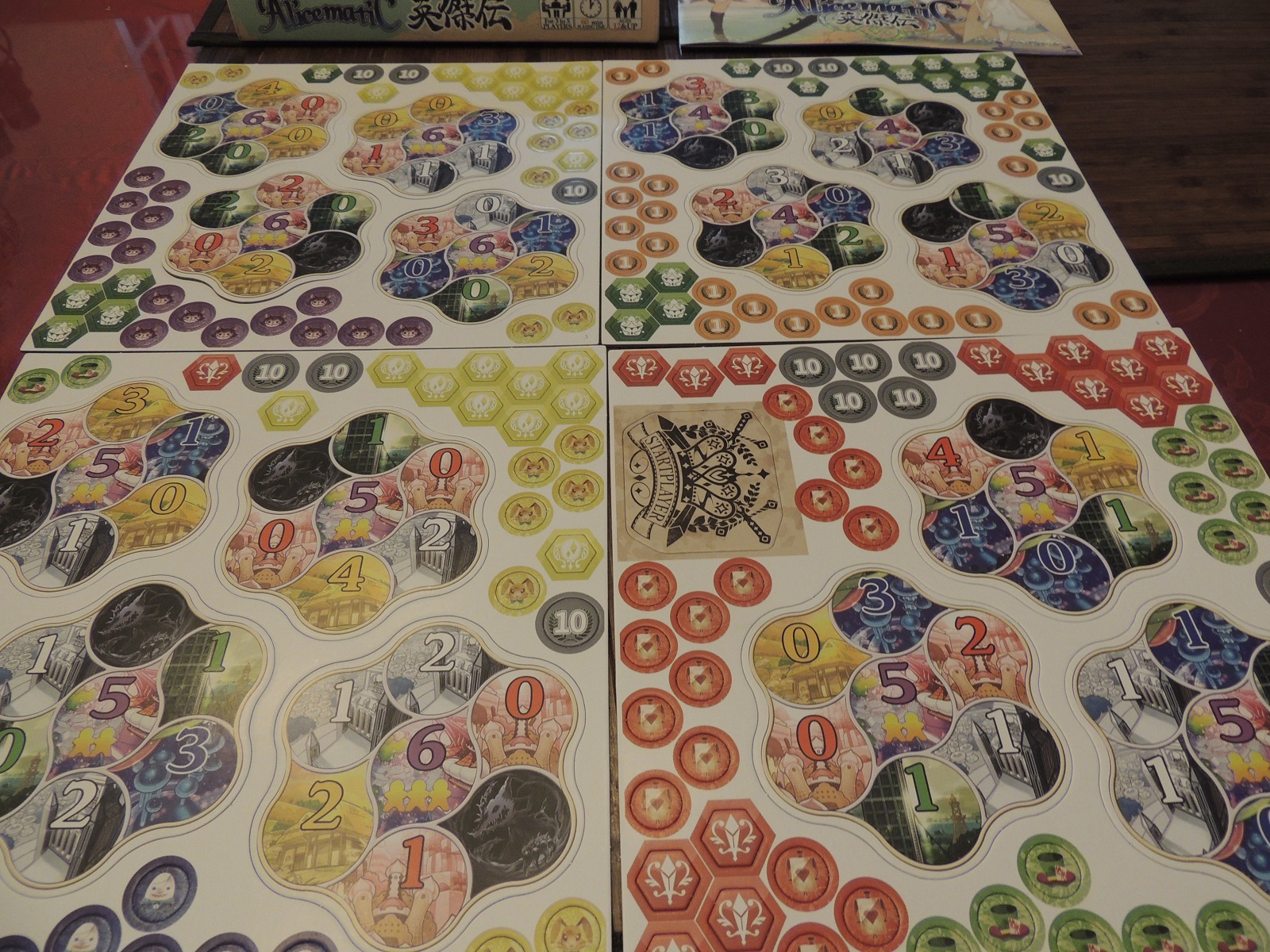 Summoning an Alice is simple: If you have enough dream power (yellow), you may summon her and activate her Megalomania ability. They’re all pretty useful, from letting you swap resource tokens to gaining victory points at the end of the game. Each face-up Alice is placed on her corresponding color, thus increasing that power stat by one. However, if you don’t have enough power or want to just increase power stats, you can play the Alice face-down as a commoner; while her Megalomania ability won’t be triggered, this is a great way to beef up your stats (and allows you to draw another card; summoning an Alice face-up won’t let you do this). However, you can only have four cards in any given color (though Emperor Alice will increase this by one), which means placing too many commoners on one color can prevent you from playing a stronger Alice later in the game. 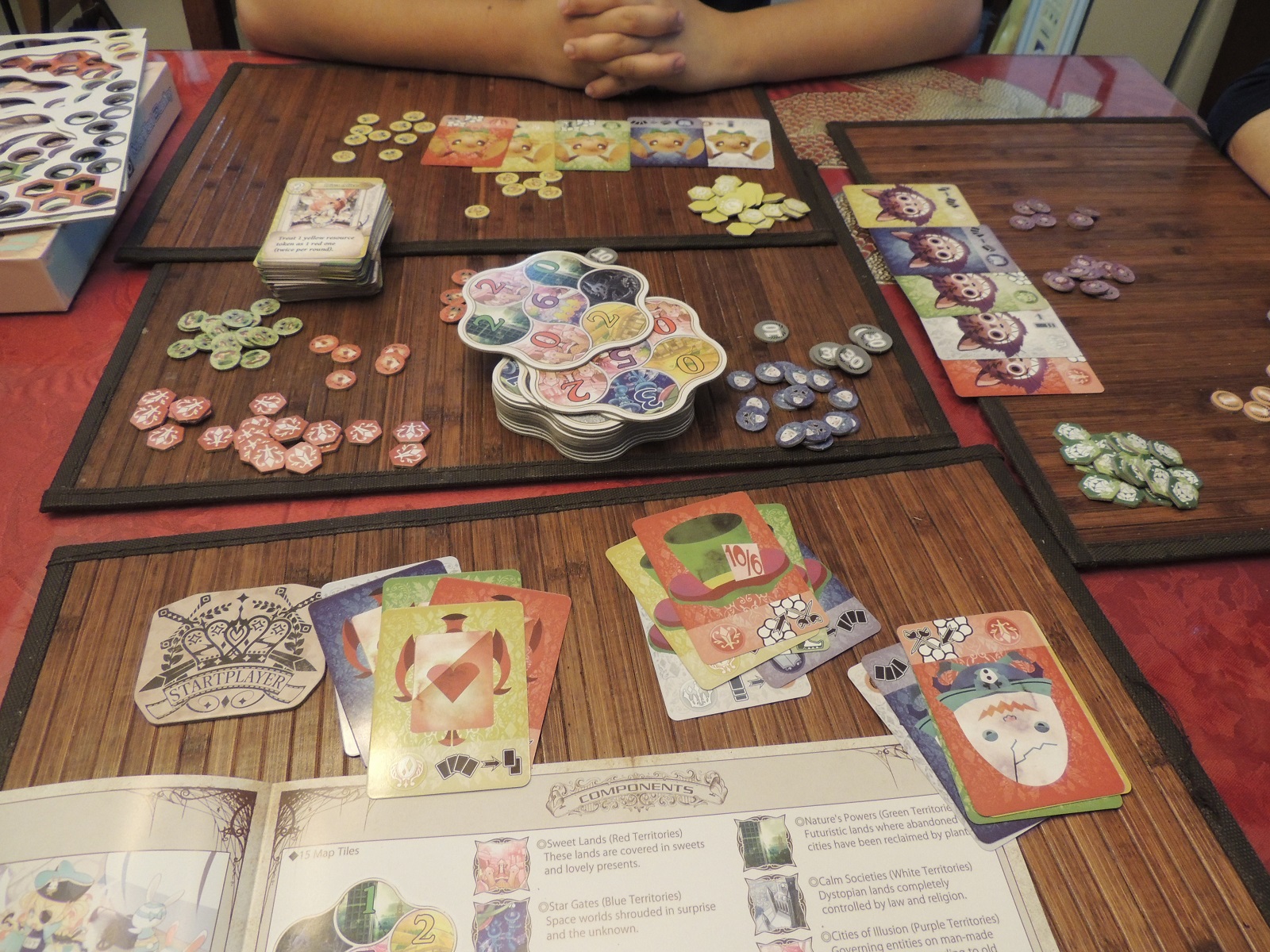 From here, you can choose which space to invade. You can do this by combining mobility power (the distance from your closest city to the selected space), and military power (which is indicated by the number on the space itself). If you can beat both stats, the space is yours and you will get resource tokens based on the color of the land. This resource payout is determined by how many cards are currently in that slot; having three cards total on the yellow slot, for example, will give you three yellow tokens. These can be used as a one-time consumable to summon stronger Alice cards (such as Astronaut Alice, who requires six dream power). This is necessary, as trying to invade things like cities or Mystic Forests will be quite difficult, often needing way more than your four card maximum to conquer. I like to think of your Alice card count as permanent equipment, with resource tokens being consumable boost items. Putting cards in your blue slot will allow you to draw as many cards as there are in your slot (so two cards in the slot means you’ll draw two cards if you take a blue territory). Similarly, cards in the white slot will give you more victory points if you take a white territory. 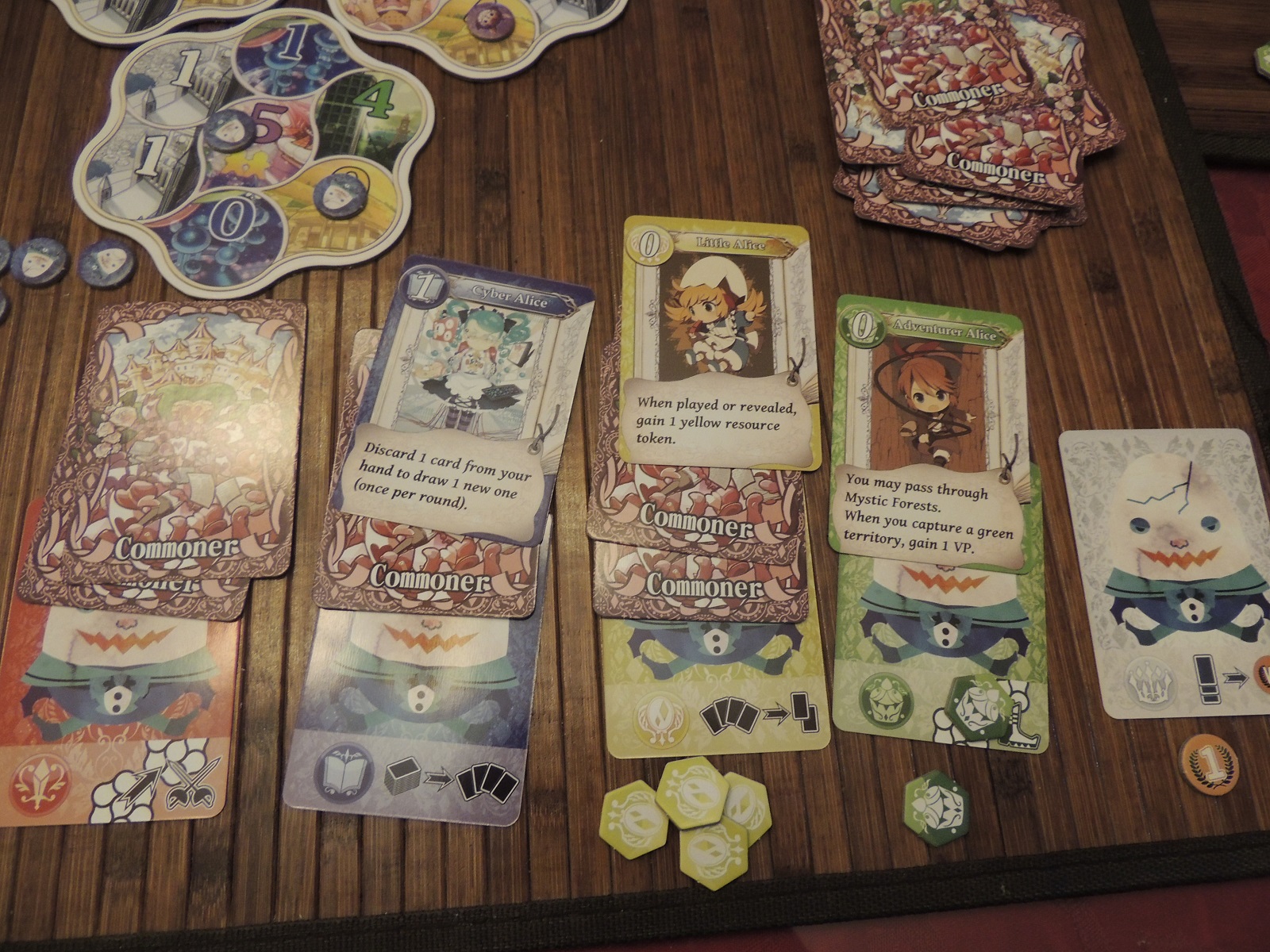 If you do not meet either of these requirements to invade, you can place the space under attack. This means that you will hold the space as pending until your next turn; if you decide to attack it again, it’s yours. However, this location is vulnerable and can be taken by other opponents that might want the space for their own purposes, so you’ll need to plan ahead. This is also a good strategy if you don’t want to waste resources on taking a space (as placing something under attack means you can obtain it without spending resource tokens). That being said, cities (which are in the middle of a tile) must be taken in one turn, as well as Mystic Forests. Mystic Forests contain remnants of the Nothing and can only be taken once all surrounding spaces are claimed; only the person or people with the most spaces claimed can challenge the Mystic Forest, and its military power is the total of everything surrounding it. Say, for instance, the Mystic Forest is surrounded by three spaces equaling 8 points. The person who can claim two of those surrounding spaces can challenge the Mystic Forest, and if they have military power equal to 8, they will claim it. The bonus for this is victory points equal to the amount of military power required, which makes for a very good endgame advantage. Spaces not connected by a player’s city can also be invaded, though the invasion bonus is cut down in half.

After each player takes 14 turns, the game ends and points are scored. Each tile awards six points to the player who has the most spaces claimed, with the second place player getting three. (In the case of a tie for most spaces claimed, each tied player gets three points, but a tie for second place awards nothing). Each colored slot also awards points to the player or players who have the most face-up Alices, corresponding to the number played (so if someone has three face-up Alice cards in the green slot, they would get three points). Finally, any postgame Megalomania effects are in play (usually through white Alice cards which grant perks like gaining two victory points for every three of a certain colored territory obtained). The player who has the most victory points at the end wins, though there are more win conditions should two or more players be tied. 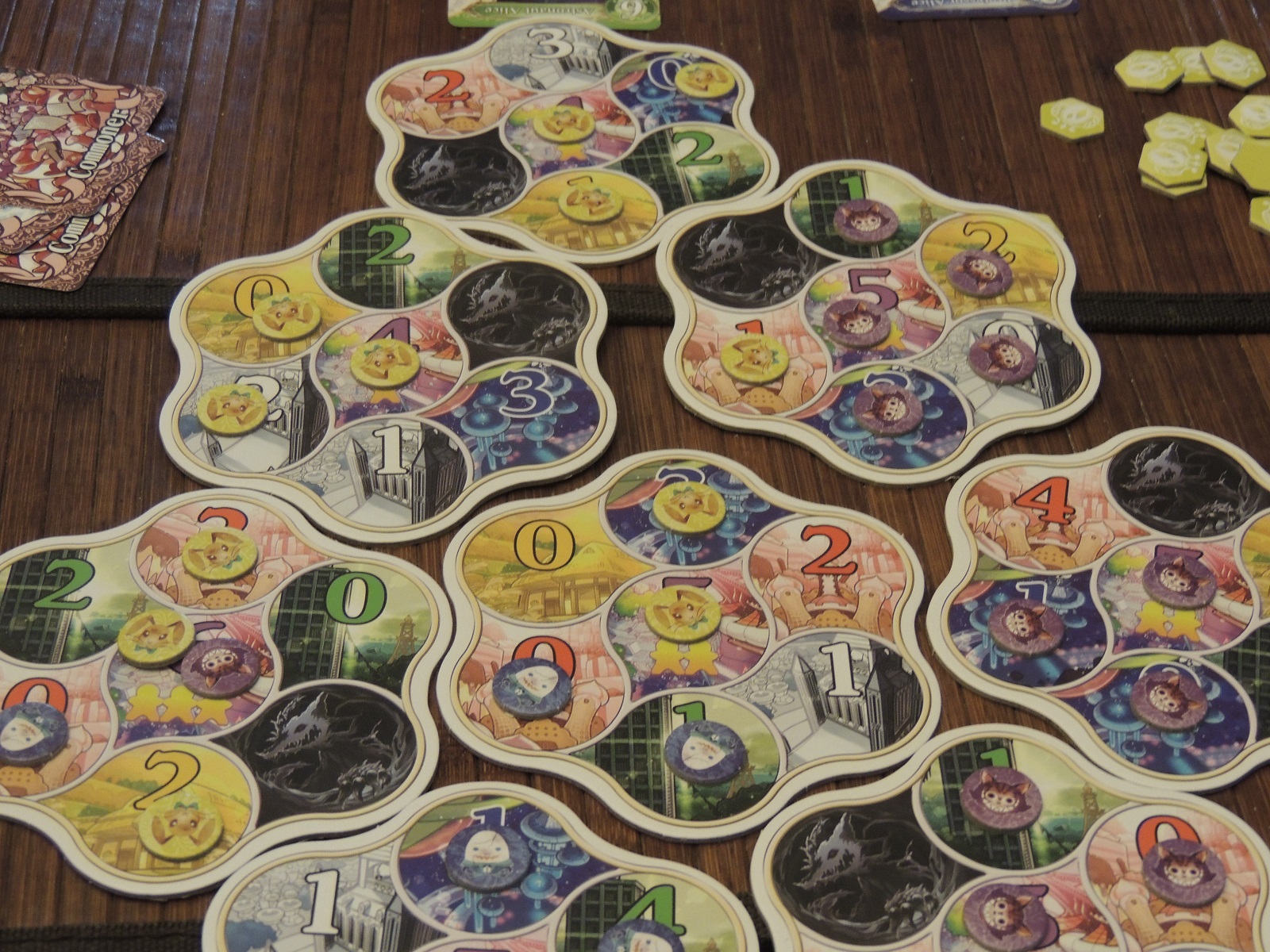 Overall, the flow of the game is relatively simple and the fact that each player has only two phases makes play go pretty quickly, but unfortunately the initial setup can be a bit daunting for casual or intermediate types. It took a while to get the flow of the game going, and the directions in the manual were unnecessarily complicated. The lore for the game was surprisingly well done, but it unfortunately muddles the ease of play. Once my friends who played with me got the rules down (which admittedly took more than an hour and a half), the game moved at a pretty fast pace afterwards, lasting under an hour. It’s not something you can just jump into, which is rather unfortunate given how fun the game can be with faster actions.

Aside from this, I feel like getting mid-game victory points feels a bit skewed towards getting them with Mystic Forest spaces rather than with white Alice cards. In the three-player games I’ve played, the person who did end up getting even one Mystic Forest ended up being the winner, even though all of us did invest in cards for the white spot (which give you automatic victory points). We ended up ditching that strategy and went headfirst into Mystic Forests, which means they’re a little imbalanced. This isn’t a problem with four or five player games considering that it’s harder to claim a majority of surrounding spaces, but I think they should be nerfed in three-player ones.

What I really love about the game, however, is the art style and components. While the boxart dons a lovely anime aesthetic, the Alice cards themselves are chibi avatars, which gives a little moe atmosphere to the whole experience. The art style is tastefully done, delving into cute rather than sensual, and I enjoyed the card art. The construction of map tiles is sturdy, with tokens also being solid and durable. Combined with a box that feels pretty darn perfectly sized, I can imagine lugging this around once I can get more people to understand the rules. The game doesn’t include small bags to carry tokens and other cards, however, so you might want to invest in a few small Ziploc baggies beforehand. 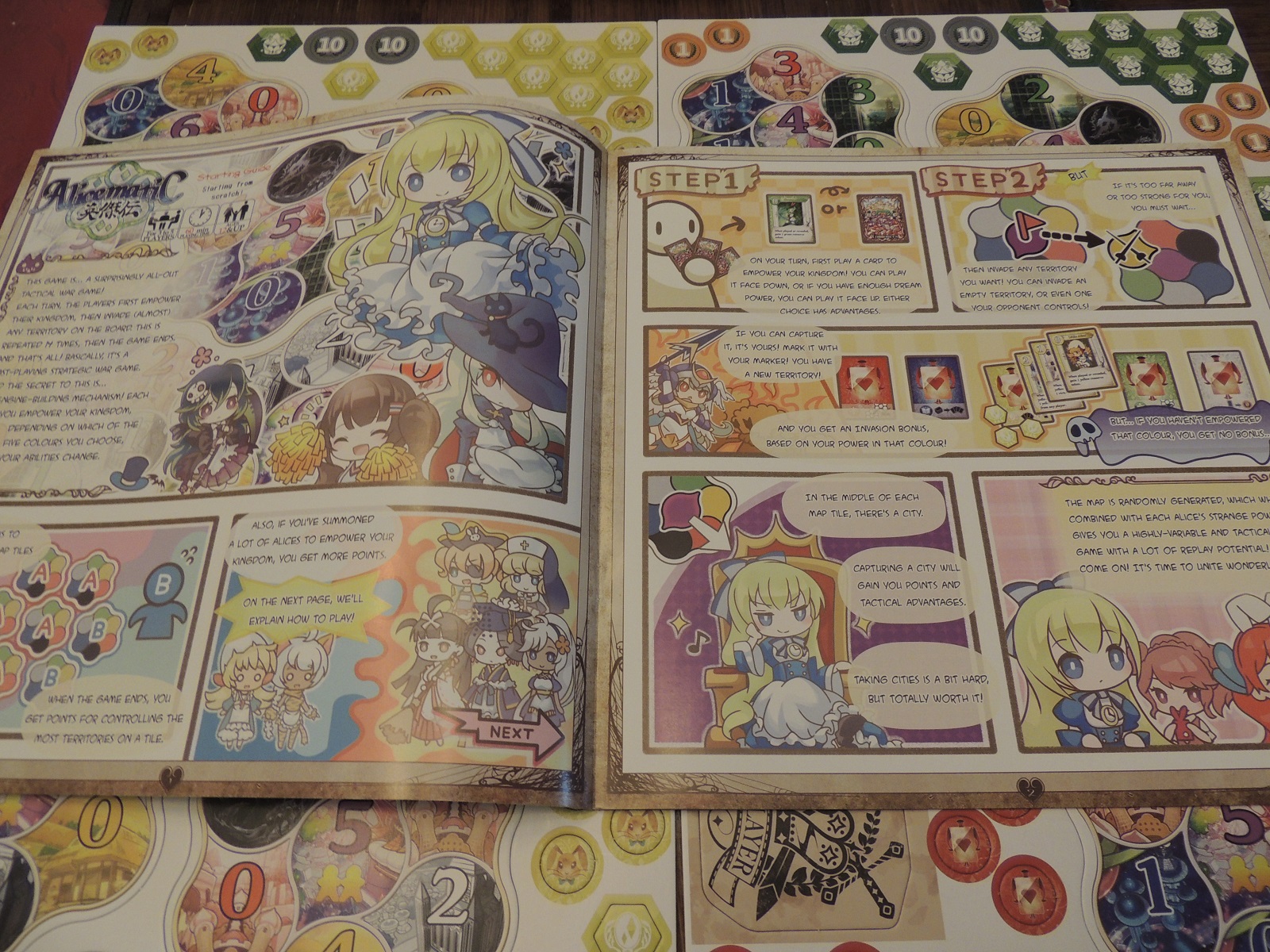 Alicematic Heroes is a fun strategy game that might feel a bit unnecessarily complicated at first, but eases up with continued plays. It’s an entertaining romp that’s sure to have your guests asking for another round in Wonderland.

Elisha Deogracias is an aspiring accountant by day, freelance writer by night. Before writing for Gaming Trend, he had a small gig on the now defunct Examiner. When not being a third wheel with his best friends on dates or yearning for some closure on Pushing Daisies, he's busy catching up on shonen manga and wacky rhythm games. Mains R.O.B. in Smash. Still doesn't know if he's a kid or a squid.
Related Articles: Alicematic Heroes, Tabletop
Share
Tweet
Share
Submit