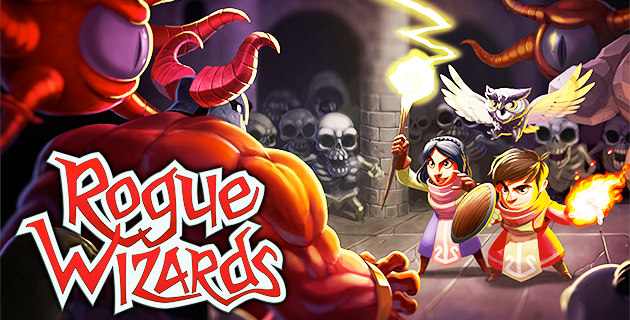 Dungeon crawlers have to walk (crawl?) a precarious line, and all too often fall to one side or the other. All too often, roguelikes fall short of becoming addicting, and instead end up being incredibly boring, far too easy, or unplayably challenging. Rogue Wizards does a nice job with this balancing act, pairing bright graphics and crisp animation with strategy, and enough randomness to keep things interesting. Rogue Wizards was successfully crowdfunded in November of 2014, and is a rare case of a Kickstarter game which actually released on schedule.

The story and underlying message in Rogue Wizards is interesting, but the storytelling itself a little weak, leaving characters feeling one-dimensional. Unfortunately this leaves the story not terribly exciting or well explained. There is no opening sequence; you are simply dropped into the first dungeon, and are set to work slaying monsters. While jumping right into the action is a nice starting point, it leaves the story a little confusing. The world is divided into elams and bandits, though I’m still not quite sure what an elam is. Women and bandits are forbidden from using magic, or considered incapable of magic entirely. An evil wizard has taken over the Guild, a school which trains the magically gifted, and it is up to you to stop a set of possessed wizards, defeat the big bad guy, heal the elemental rifts that have been opened, and restore peace to the land — making it acceptable for women and bandits to use magic along the way.

Take a break from Dungeon Crawling in your own little town

One of the game features that first caught my attention is the ability to build and manage a town. However, if you’re looking for immersive town building and resource management, Rogue Wizards is not the game for you. There is a set number of characters and buildings which unlock at set points within the story, meaning that no amount of crawling through random dungeons will unlock a new super useful shop or dungeon crawling companion ahead of schedule. You can upgrade shops can with tools and a certain amount of gold, a feature which has the potential to be painfully expensive. Fortunately, every time you sell gear at a shop, you not only get gold, you also reduce the cost of upgrading that particular store. By making use of this simple feature, I never had to pay more than 300 gold to upgrade any shop.

The perpetually generated dungeons are fun to explore, frustrating at times, and always interesting. Tiles fall and spring into place as you move, giving visual interest and life to what could otherwise be a static, boring trek. I found the first few dungeon trips to be quite challenging, and either barely survived or died, which was fine! I started out on normal mode, so I respawned in town with all my gold and items intact, and was able to gear up and head right back in. I was elated when, upon entering a dungeon for the second time, I was met with an entirely different set of monsters from before. While each monster is visually distinct, there are fewer than 40 different monsters total, which is not a bad thing. Part of success in battle depends on strategy, and that relies on your ability to remember which enemies move two squares per turn instead of one, which leave damaging poison panels upon death, and which ones will zap you from clear across the room.

Some monsters throw mud bombs, which block your view of the battle field

Several enemies make use of some simple but stunningly annoying abilities to hinder your fighting. I often found myself prioritizing monsters which were not necessarily the biggest threat simply because they were obnoxious. Golems throw mud blobs at the screen, blocking your view. While this sounds minor, after the 5th or so mud blob, you can’t actually see most of the battle, making planning and targeting nearly impossible. Gryphons cover the floor with ice, causing you to slide away any time you move or are attacked, and sometimes you can slide far enough to be ejected from a room or a battle entirely. One particularly horrible monster throws eggs, which, after a certain number of turns, can hatch into even more enemies, leaving you hopelessly outnumbered if you do not plan and act accordingly.

If I sound frustrated, it’s the delighted kind of frustrated. Rogue Wizards has a way of putting you in situations where you feel like you are going to fail, but with a little planning, and the right use of spells and elemental weaknesses, you come you on top. That feeling of accomplishing the impossible kept me diving back into dungeons again and again. While dungeons and their monsters are very stimulating, boss battles feel lackluster and formulaic. The same strategy seemed to work on every boss, and I was actually able to beat the final boss without using any healing spells or items at all.

Dungeons are full of loot, and glowing auras let you know how an item is

Rogue Wizards does reward the dedicated dungeon crawler with a substantial experience boost every time you defeat all enemies on a floor, and every time you open all chests on a floor. With the addition of easter egg nods to games like Rogue Legacy, Star Command and Chasm, as well as the ability to teleport to key locations which you have already visited, I found plenty of reasons to explore every nook and cranny in almost every dungeon.

Dungeon crawling alone is not terribly fun, especially when you find yourself taking on six or more monsters at once, which happens fairly frequently. Fortunately, you will be joined by NPCs at key points, and you are also able to recruit a small number of animal companions along the way. Having an animal or a fellow adventurer to provide a little more damage, some healing, or even just to serve as another target can reduce frustration and make dungeon crawling a little faster and a lot more fun. I was somewhat disappointed by the severe lack of self preservation, and sometimes even common sense, present in the AI. My frustration is further confounded by the inability to issue simple commands to my party. The game would feel much more satisfying and strategy-focused with the ability to tell teammates to “stay back and save your health” or “target this monster first.”

The gear system in Rogue Wizards is pretty complex and interesting. Weapons and armor can be enhanced, giving it a host of additional features beyond raw defense and attack power. Extra damage to melee monsters, freeze on hit, auto casting of spells, experience boosts, and lifesteal are just a few of the many enchantments which can greatly improve your survivability. I did find that, almost without exception, gear looted from dungeons is more powerful and has more enhancements than whatever is for sale in stores. This is nice in that it lets you spend your hard-earned gold further enchanting your gear, rather than buying it.

The game features a Hall of Fame, which records your name, stats and play time every time you beat the game in story mode. The story was linear enough that I did not find myself eager to replay the story, but Rogue Wizards also provides a Gauntlet mode, where you spawn inside a dungeon and survive as long as you are able to. This feature nicely scratches the occasional dungeon crawling itch, and I found myself diving into see how long I could survive time and time again. All in all, Rogue Wizards is a satisfying to play, and a great first title from Spellbind Studios.

Rogue Wizards is a solid casual roguelike with unique monster designs, perpetually generated dungeons and 10-12 hours of story-mode gameplay. Dungeons themselves are challenging and fun, requiring a bit strategy to defeat monsters which utilize truly unique and interesting attacks. While the boss battles and AI are a little lackluster, the ability to teleport within floors, bonuses for defeating all enemies, and the replayability offered by the Gauntlet mode make Rogue Wizards a good investment for the small price tag of $15.