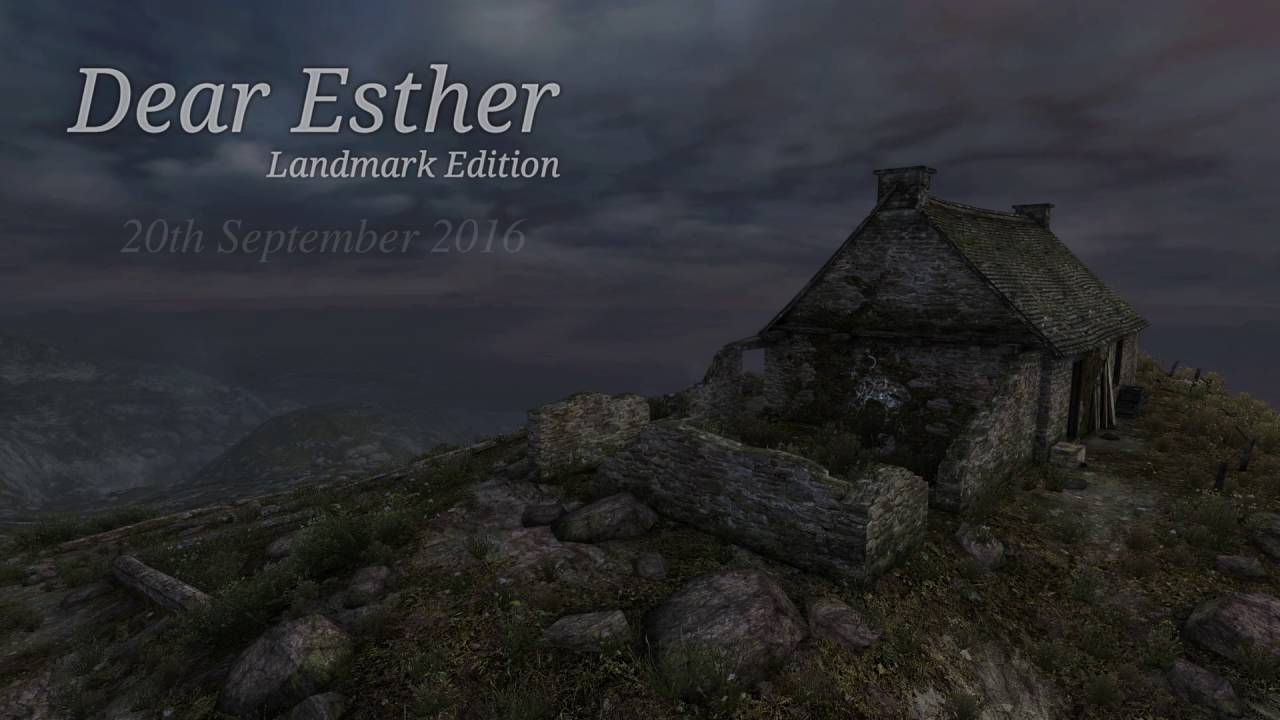 Having evolved from a Half Life 2 mod, Dear Esther is an immersive walking simulator that explores a mysterious island with an unnamed narrator and the little things he has to tell us about his and Esther’s story. Through discarded items and strange messages left in bioluminescent paint, the player will slowly discover the meaning of this island, what it means, and who Esther was.

At first, it seems like there is very little to this game, as the only mechanics are to walk and zoom in on the environment around you. However, that’s all you need. It becomes clear very early on that this is not meant to be a fast-paced experience. With so much detail in the environment, it’s impossible to get any less than the full experience by just walking forward. Dear Esther is meant to be meandered through, as you look up, down, and all around for little details on the island. There are nooks and crannies with easter eggs and clues tucked away, meant to be stumbled upon with a slow and steady pace.

While there is a story to Dear Esther, it’s up to the player to contemplate and think about what all the bits of narration and clues on the island mean to the story. From something as simple and hard to spot as a randomly generated picture of an ultrasound on a table to an obvious candlelit shrine of shredded automobile parts, the story is not spoon-fed to the player. And much of the setting, while concrete in nature, is actually incredibly metaphorical. Discarded items on the beach, a shipwreck inside the bay, an infant-sized statue hidden behind a decrepit building are all ways to quietly keep the story going.

I’m a sucker for a truly beautiful game. And considering Dear Esther evolved from a mod, I believe they succeeded. The environment was gorgeously designed, animated, and had both elements of realism and surrealism balanced very well. There are four chapters to the game that vary in surrealism, one of which is a very ethereal experience through a series of bioluminescent caves, my personal favorite. It was interesting getting to go through these different levels a second time with the director’s commentary (included with the game), because I was able to hear the creator’s thoughts, feelings, and inspirations that went into every little detail. It reminded me of how important someone like the composer for a game is, the way she, Jessica Curry, so easily manipulates the player’s emotional involvement with the simplest of musical pieces. Even in some of those pieces were details some people, such as myself, would never have picked up on, like a piano tapping out “Esther” in morse code, or the style of violin played in a distinctly Scottish style.

While short and surreal, Dear Esther is a very artistic and symbolic game meant to be taken slowly and with thought. In a world of fast-paced platforms and first person shooters, this game is a unique one, to say the least. Its calm pace and vague storytelling may not be for everyone, but it is worth giving a try for those who are skeptical.

A beautifully animated walking simulator. I recommend that you give it a play, because it really is quite a different experience from most mainstream, fast driven, AAA games. It reminded me of a form of meditation because it was simply that immersive.