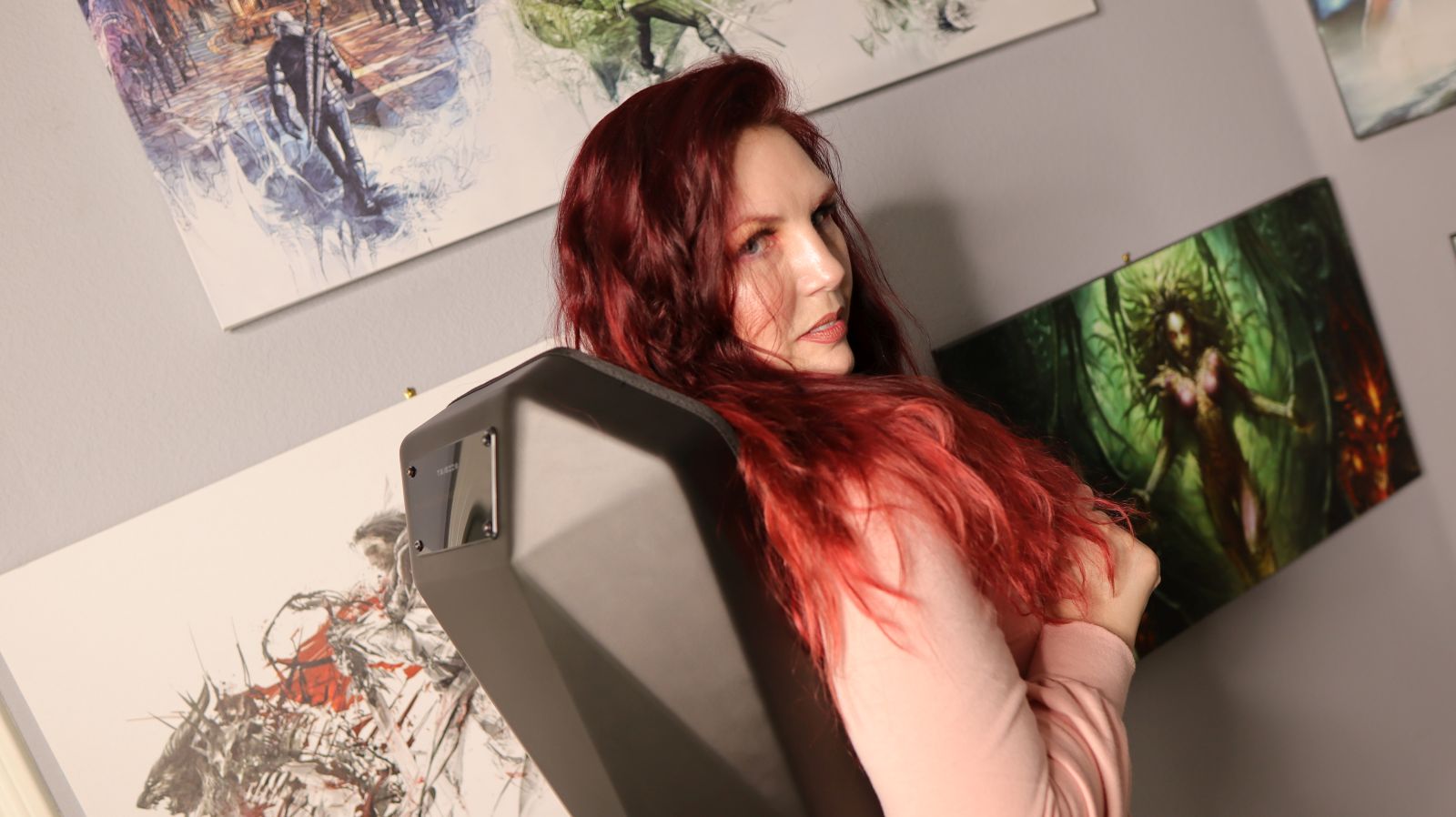 I own a lot of backpacks. Let’s not get into how many as that’s just going to make everyone uncomfortable. The gaming industry supplies backpacks and satchels like candy on a table, so I’ve ended up with more than a few. Some are fantastic, like the packs from Solo, and some are just basic bags with straps. While I do have one semi-solid backpack, I continue to have a need for something that can protect my camera equipment and laptop when I travel for Gaming Trend. There has to be a hard-shelled backpack out there that’ll do that, right? I stumbled upon the Tajezzo line of backpacks, and I think I might have found my answer.

As you can see in the video above, the Tajezzo (which is the Chinese name for “Trailer”) PZ4 backpack is classified as a “smart backpack”. Featuring a Bluetooth speaker with a large battery, this device doubles as a mobile entertainment device, but that’s just the surface. Let’s dive into the various modes on the PZ4.

There are four modes available on the PZ4, and each has some specific uses that may not be initially obvious. The backpack features a fairly large LED screen on the top rear of the shell that doubles as a visual indicator for several of the available modes. Night Mode automatically lights up the bar to let folks know you are there — useful as everyone I know who rides a motorcycle (including me) typically has a black leather jacket and a black helmet. Sport mode leaves the light off until there is an emergency situation. Using a motion sensor module that can detect shock, the light will flash quickly should you have to make a sudden stop, grabbing the attention of those behind you. Music mode is just for fun, lighting up the LED dynamically with the music you are playing through the speakers. If none of that is for you, you can also simply turn off the light entirely.

I do have to point out that the voice work on this backpack is rather rough. No offense to the person who voiced the PZ4, but the Tajezzo team will probably want to bring in a localized voice for Western audiences so the voice prompts are clear and easy to understand. 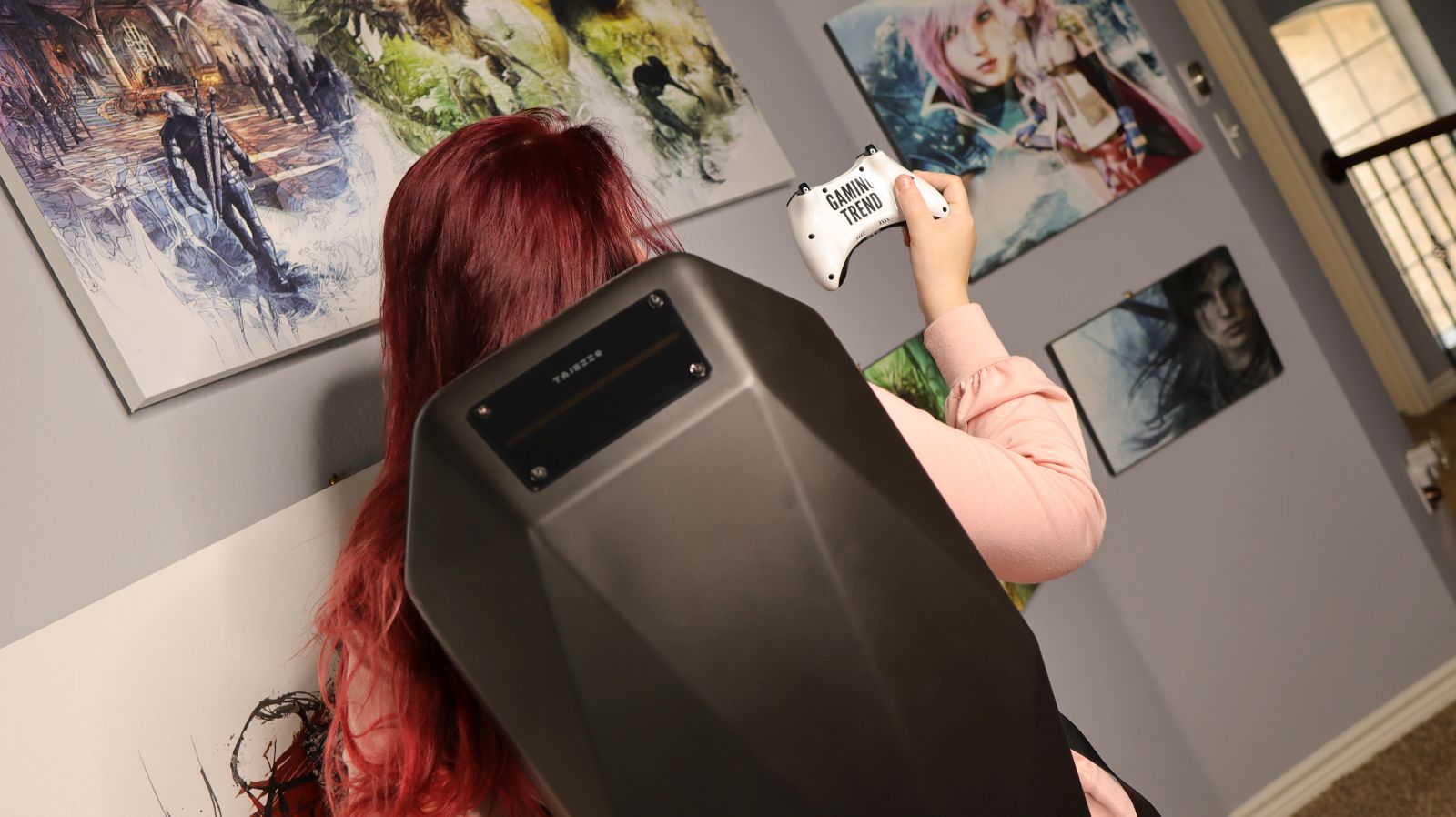 I’m not sure I’d ever use this function, but the PZ4 is also capable of acting as an external Bluetooth speaker for phone calls. When connected to your phone, you can tap the phone call button on the pack to have it redial your last call. I called my mom to say hi in the video above so you can hear it for yourself. It works remarkably well as the speakers are very clear. I’m not sure where the microphone is located, but mom said she could hear me very clearly. She was surprised I was calling her from a backpack and had no indication that I wasn’t using my usual Bluetooth earbuds to call her.

Rounding out the audio, I have to say that the speakers on the PZ4 are remarkable. Located at the top of the backpack, these speakers are not only clear, they deliver a ton of bass. They face the back of your head (or the bottom of the pack) but deliver sound omnidirectionally. You can hear it clearly from behind, but they are most clear when lying on the shell. You can hear a song in the video above, but it’s hard to really show you just how great these are. The bass was enough to rattle the desk I use for filming, and the high tones are crisp and clear. I can see sticking the PZ4 in the middle of my camping space to jam out some tunes at the end of the night, or taking advantage of the waterproof shell and bringing it with me in a boat. Just remember that the underside is cloth — you can’t dive with it!

The padding on the PZ4 reminds me of the Dell XPS laptop bag. That bag was meant to hold a 15 pound laptop, so it gave you a great deal of padding, especially on the lower back. The PZ4 has padding in the same places, ensuring that it sits comfortably while still distributing the weight evenly. I do wish that the padding on the shoulder straps was a little better, but it’s a step up from most backpacks on the market. 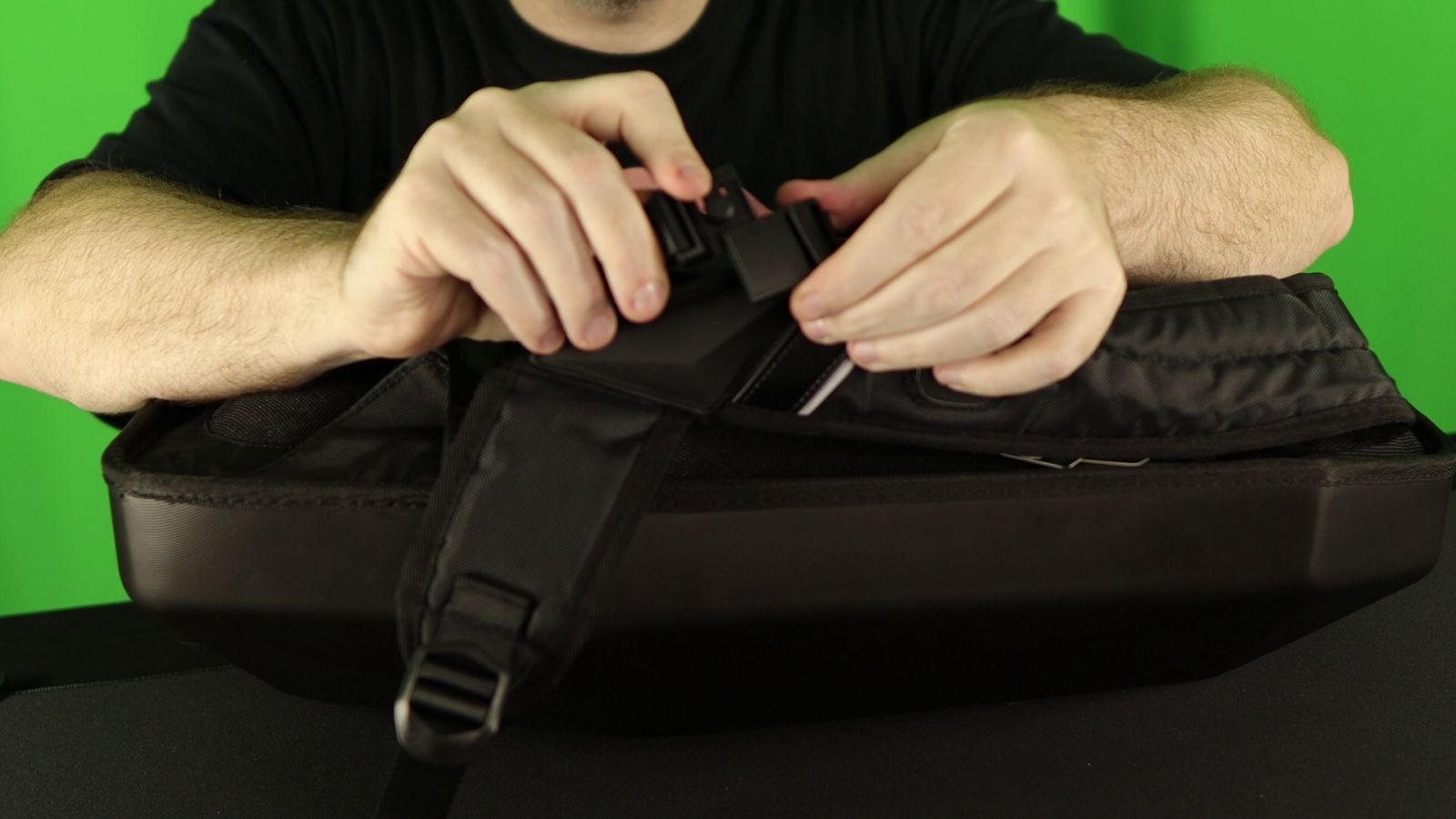 This magnetized clip is unique

Hidden behind the lower back pad is the cable to charge the battery in the backpack (it’s 5000 mAh, so it should last roughly 6-8 hours), as well as a USB-C and Thunderbolt cable to charge an Android or Apple device like your phone. The chargers are standard speed, so it’d be nice to see Qi or rapid charging tech make it into future models as I don’t want to be tethered to my backpack to charge my phone for extended periods of time.

Heading into the backpack, there are a number of features I really appreciate. Every adjustable strap ends with a gusseted triangle to alleviate direct pressure on the straps. This method is used in martial arts uniforms to ensure they don’t tear, and they work just as well here. Similarly, the clips are somewhat non-traditional, sliding to the side instead of straight down, and using very strong magnets to hold them in place instead of clips. This new clip style should hold up better than the squeeze types we typically see.

As soon as you open the bag you’ll find a top pouch to store a phone or battery. Pulling that (it’s held with velcro) you’ll uncover the laptop portion of the bag. Rather than a simple sleeve, Tajezzo has placed some small square cushions throughout this portion to keep your devices safe. It will easily accommodate a 15” laptop or Macbook, though there is a hitch that we’ll get to later. Underneath this lies a mesh zippered pouch that is designated as document storage. It’s frankly too small for a notepad, so I used it for cables I more frequently need like my phone charger. 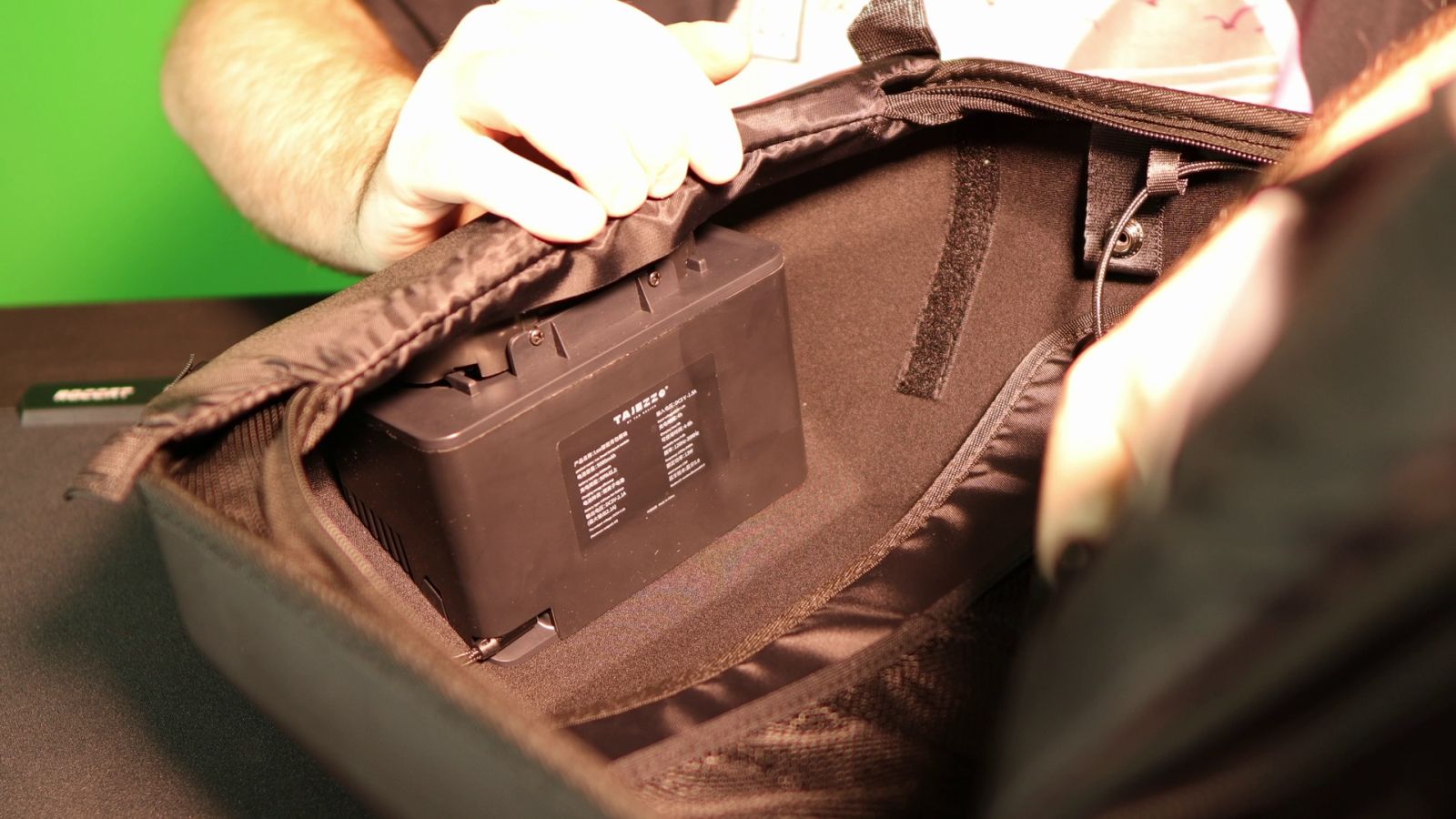 The speaker is POWERFUL

Just above the shell is a detachable plate. Snapped into the bag in four places to ensure it stays put, this has mesh pockets and pouches on both sides for storing additional cables and small pieces of equipment, and also has a carabiner clip on top. The clip is great for holding your keys so you can easily find them when it’s time to head home. I like the fact that this plate is removable as it provides a little more space inside the shell, but it’s hard to argue with all of the spaces to store my cables.

The inside shell is spacious while still retaining a slimmer profile. The polyhedral shape holds quite a bit as I was able to store my laptop and its power brick, a mouse, my camera, an extra lens, a variety of cables, a spare battery, a mini tripod, and a full sized pair of headphones. It was a tight fit, but that’s more than I can carry in any backpack except for my large Solo bag, so that’s a win. The hard shell also means I don’t have to worry about damage, no matter what somebody might throw on top of it during my flight.
There is one critical flaw with the PZ4, and it’s one that has been recognized by the Tajezzo team as they fixed it for the upcoming PZ5 Kickstarter effort. The backpack doesn’t open 180 degrees, stopping several inches from the bottom, so it’s a challenge to get a backpack in while the shell is full. As such it makes getting into the contents of the bag difficult when you do have a laptop inside. Being able to open the backpack entirely is the only solution for a bag that doesn’t have a traditional top-load style. 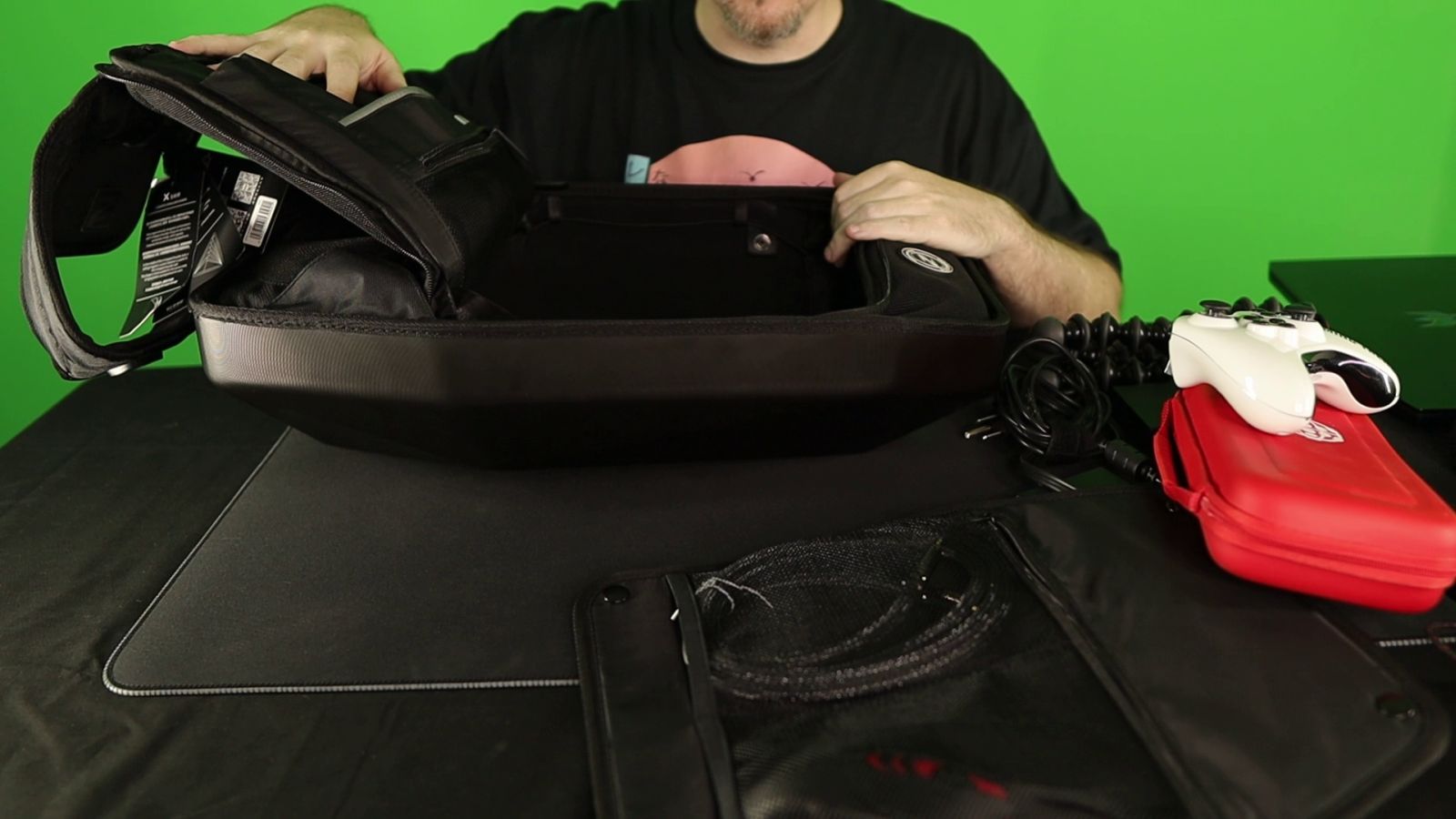 The PZ4 doesn’t open all the way…but the upcoming PZ5 does!

Overall I came away surprised at all the things this bag can do. Whether it’s a day at the beach, camping, or just making sure your stuff makes it to your destination in one piece, the PZ4 has you covered. I’m hoping the PZ5 perfects the little things we’ve identified in time for us to finally be able to travel again. I’m getting restless!

The Tajezzo PZ4 hits most of the points I need in a hard shell backpack, offering incredible protection and excellent sound for a flight or a day at the beach. There are a few small challenges, but the updates coming in the PZ5 should make this bag perfect for travel.

Ron Burke is the Editor in Chief for Gaming Trend. Currently living in Fort Worth, Texas, Ron is an old-school gamer who enjoys CRPGs, action/adventure, platformers, music games, and has recently gotten into tabletop gaming. Ron is also a fourth degree black belt, with a Master's rank in Matsumura Seito Shōrin-ryū, Moo Duk Kwan Tang Soo Do, Universal Tang Soo Do Alliance, and International Tang Soo Do Federation. He also holds ranks in several other styles in his search to be a well-rounded fighter. Ron has been married to Gaming Trend Editor, Laura Burke, for 21 years. They have three dogs - Pazuzu (Irish Terrier), Atë, and Calliope (both Australian Kelpie/Pit Bull mixes).
Related Articles: Hardware, Tajezzo PZ4 Backpack
Share
Tweet
Share
Submit