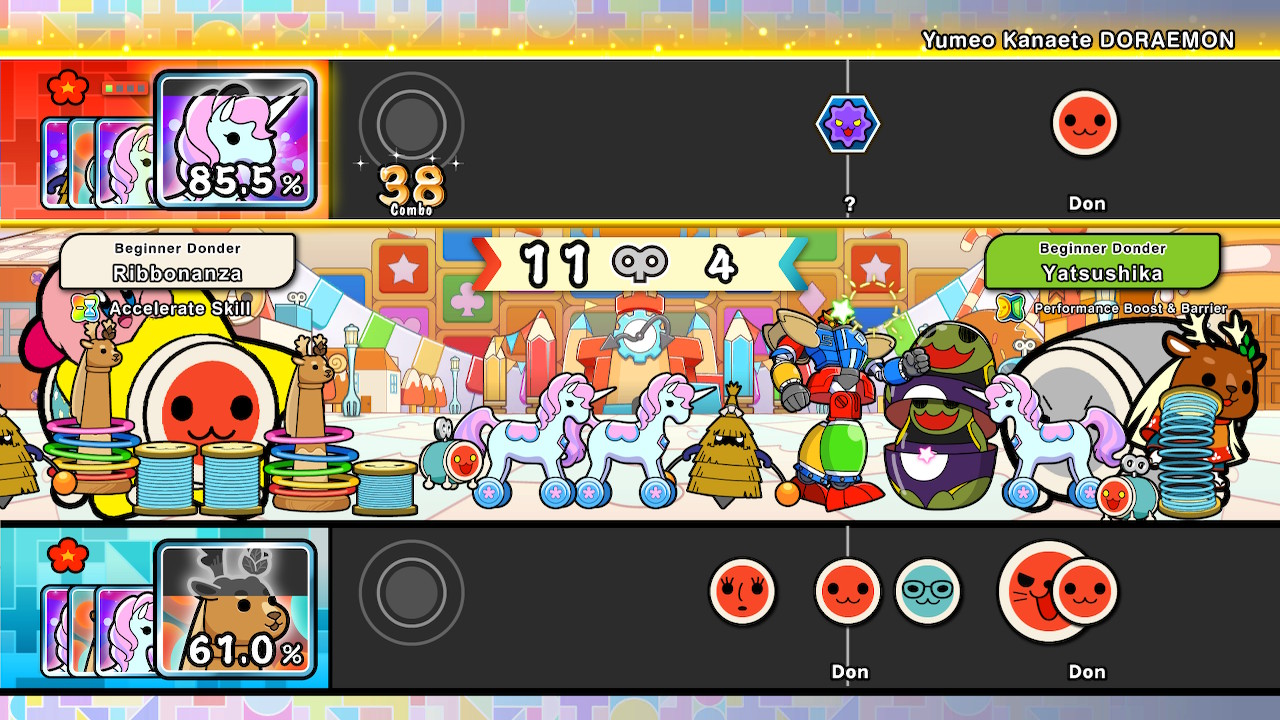 The Taiko no Tatsujin, translated to Drum Master, series has been a hit in Japanese arcades since 2001. In these rhythm games, you hit the center and sides of a large drum to the beat of the music. With tons of licensed and original songs, players have been competing for high scores and full combos for over 20 years. The western world got a taste of the series on PS2 in 2004, but the next localized release would come much later in 2018. Now seems like a great time to jump into the series with the latest home console release, Taiko no Tatsujin: Rhythm Festival on Nintendo Switch.

Taiko no Tatsujin is easy to pick up, yet difficult to master. When playing with a controller (there is a drum peripheral available separately), the game only uses two buttons; one for the red Don beats and another for the blue Ka beats. There are also several other types of notes, including drum roll sections where you mash the buttons and golden mattes where you… mash the buttons. OK, mechanically it’s very, very simple but you’d be surprised how difficult some songs and difficulties can get with how fast they go or how many notes there are.

The main mode is the aptly titled Taiko Mode at the Thunder Shrine, but you can also customize Don-Chan in My Room, purchase cosmetics and instruments in the store, and play the Great Drum War or Don-chan Band in Taiko Land. The Great Drum War is something of a single player campaign, in which you create a team of toys to push your opponent off the stage by playing the usual rhythm game. Meanwhile, Don-chan Band allows up to four players to form a band and each chooses a part to play in a song. Unfortunately I wasn’t able to play with anyone, so we’ll be sticking with single player here.

While the Great Drum War is certainly interesting, I spent most of my time in Taiko Mode playing songs that appealed to me. The core gameplay here is pretty strong and there’s a great selection of songs on offer with everything from original tracks to licensed pieces from anime, vocaloids, pop-culture, video games, and more. It’s a bit weird to have Gurenge from Demon Slayer right next to He’s A Pirate, Symphony No.5, and Life Will Change but that’s part of the appeal. There’s a ton to choose from right out of the box that will please any rhythm game fan. 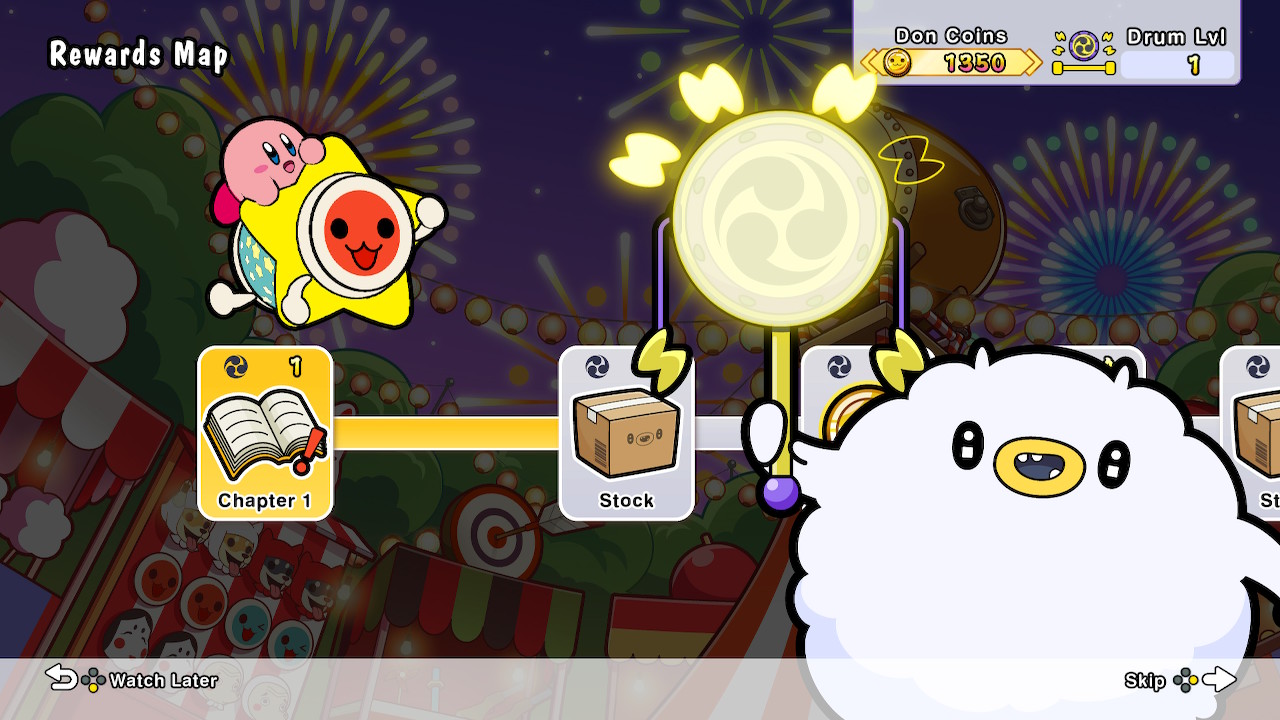 If you crave more, however, there are song packs to purchase as DLC as well as the Taiko Pass subscription service. While DLC songs are yours forever after purchasing, you can also subscribe to the Taiko Pass for $10 for 90 days with new songs being added every month. After trying the free trial, I’d say this is a great deal if this is your go-to rhythm game. If not, just check out the songs you’re interested in with the trial and leave it at that. While the base game’s library has a great selection, the pass increases that exponentially including hits like TANK from Cowboy Bebop, several Hatsune Miku tracks, Night and Day from Ace Combat 2, Sono Chi no Sadame from Jojo’s Bizarre Adventure, and one of my favorite songs ever Plastic Love by Mariya Takeuchi. From what I can tell these all appear to be new recordings too (I can’t check all 500 songs), which has its positives and negatives.

On one hand, it’s cool to hear these iconic songs recreated specifically for this game, especially for those songs which were previously only available in a lower quality for whatever reason. On the other hand, these versions are often drastically shortened. Plastic Love, for example, is a whopping 8 minute song but reduced to around 2 in game. The song clearly continues into the first chorus as it fades out in game, which only makes me want to hear the rest. I get that this is technically better for portable and arcade play, but I’d at least like the option for an endurance run of the full song. 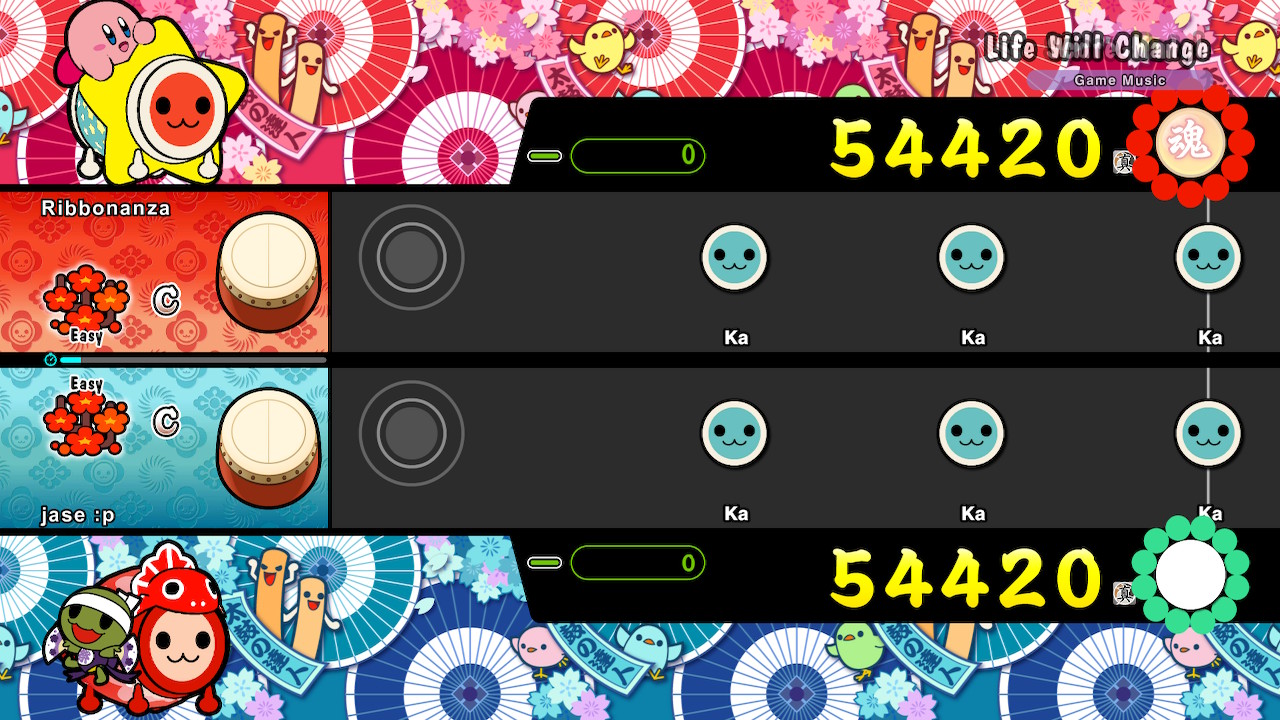 With every subscription service, I also have to worry about the long term effects this will have on the game. There are so many licensed songs, so what happens when that license runs out? Will the content you pay for be removed entirely once the next game comes out? It would be one thing if you could buy these songs individually to keep or pay for the subscription for limited time access, but the DLC songs are completely different from the Taiko Pass. Still, at the moment this is a great deal if you plan on making this your rhythm game of choice.

Moving on from monetization, you can of course play head to head against players through the online mode or locally. I was able to play a few matches and didn’t notice any lag or anything while I was getting my butt kicked. It’s always a nice feature to have and is more fun in my opinion than simple high score leaderboards. 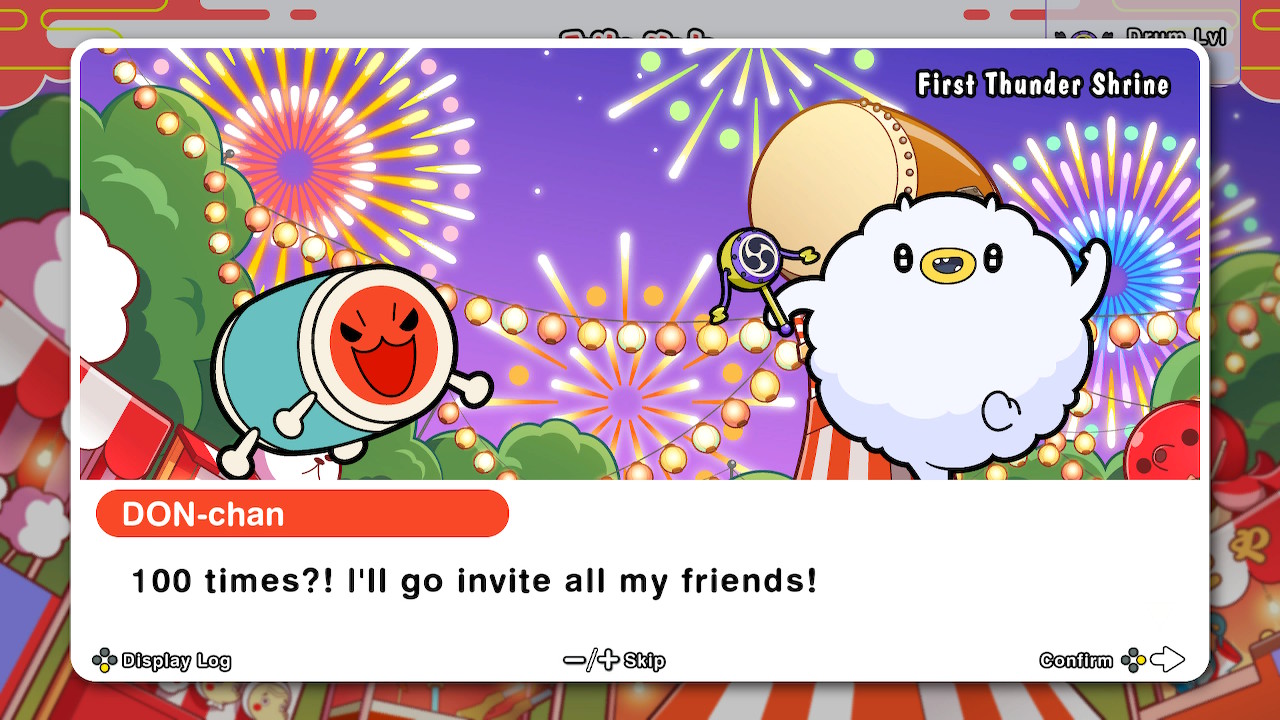 While you do have several customization options, the game and accessibility options are a bit ridgid. You can thankfully adjust the timing of notes to account for lag in your setup, but what stuck out to me was that there’s no way to change the color of the Don and Ka notes. I’m not color blind myself, but I worry that some players may find difficulty here with the bright red and blue colors as the only option. The new training mode, which allows you to practice certain parts of a song if you’re having trouble, is a great step forward but more could still be done so everyone can become a Drum Master.

Taiko no Tatsujin: Rhythm Festival has a massive song list with multiple modes and addicting yet simple gameplay. The DLC and subscription service adds an incredible amount to that list, but does make me worry for the future of the game. Even so, this is a great choice if you want to jam out alone or with friends.

David is the kind of person to wear his heart on his sleeve. He can find positives in anything, like this is a person who loved Star Fox Zero to death. You’ll see him playing all kinds of games: AAAs, Indies, game jam games, games of all genres, and writing about them! Here. On this website. When not writing or playing games, you can find David making music, games, or enjoying a good book. David’s favorite games include NieR: Automata, Mother 3, and Gravity Rush.
Related Articles: Taiko no Tatsujin: Rhythm Festival
Share
Tweet
Share
Submit