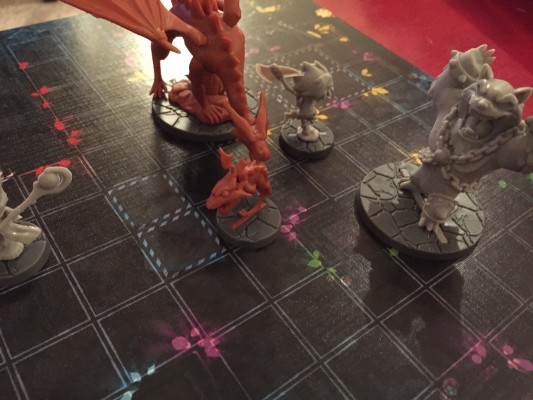 The dungeon crawl is nothing new to gamers. The dark, damp dungeon often sets the mood for adventurers in the video game and pen-and-paper realm. However, you often don’t see it mixed with a dose of happiness and cuteness. Super Dungeon Explore merges the two with a distinct chibi flair. Odd pairings, certainly, but does the cuteness hide a heart of darkness inside?

When opening the box, a bewildering array of plastic lies inside. The components include:

I admit I was hesitant to get this game at first because I knew the figures came unassembled. Since my hands aren’t always the most steady, I didn’t want my figures to turn out looking poorly. With each type of figure bagged separately, I started with the hero figures and worked toward the monsters that contained multiple copies. Most pieces inserted into holes perfectly, while others had small tips that just needed to be glued in concave depressions. With a bottle of super glue in hand, I worked on each figure. The dragonlings were finished last, and those tails were a pain, but all in all the process wasn’t too bad. I completed the process over several nights, though someone with experience could probably get it done faster. Even those who haven’t glued figures before shouldn’t be hesitant to try the game because of the glue factor involved. Just keep the nail polish remover handy for those times when your fingers accidentally get glued together.

Super Dungeon Explore pits multiple adventurers against a single Consul player who plays as the dungeon keeper. Square tiles are laid down to form the map of the dungeon. The size of the dungeon is dependent on the number of players and the length of time you want to play. The 8-bit is the shortest with two tiles and is meant for introducing the game to new players. The 16-bit game uses three tiles and takes a little longer. The Super game mode uses five tiles and takes the longest, needing at least two hours to play. (If you download the latest version of the rules, these are listed as Dungeon Delve, Dungeon Crawl, and Dungeon Siege.) Most of the dungeon tiles contain different hazards that the heroes must avoid. Walking through them causes damage or slows them down. Once the map is created, the Consul places spawning points for the monsters. Where these are placed can determine the success or failure of the heroes. The heroes enter into the dungeon, and the Consul places chests and places monsters around the spawning points.

The heroes come in several classes such as Rogue, Paladin, Mage, Fighter, and Ranger. Each hero has stats such as movement points, hit points, and action points on an associated card. Special abilities and attacks are listed at the bottom of the card. These special attacks and abilities can affect only monsters next to the character, a wave that expands the more rows it travels, or a specific area within the range of the caster.

During a turn, each side activates its characters. An initiative roll is made to determine which side goes first. If the heroes go, they take the turn for one character, and then the Consul gets to activate a number of characters. The Consul has a certain number of “skull points” to use for activating creatures. The more powerful monsters require more skull points to activate.

Combat resolves by rolling dice, but not using the d20 you might expect. Each character has a stat for attack, armor, will, and dexterity. These are represented by blue, red, and green dice. These dice have stars that are counted, with the green die having the best chance to roll stars, and the red die having a better chance of showing a higher number of stars than the blue die. The stars indicate the number of successes. First, the offense rolls their dice depending on the stat needed, and then the defense rolls theirs. The highest total wins.

As heroes kill off creatures, a loot counter is moved along a Loot-O-Meter track for each wound inflicted against minions. When the counter moves on a treasure chest, a loot card is drawn. The loot counter is moved back to the beginning after all of the hero players have taken their turn, so the heroes will want to try to get as many monsters killed without moving over extra spaces.

A separate Power Gauge is moved similarly to the Loot-O-Meter. It moves forward for all wounds done, creature and hero. As it advances, it lets the Consul summon more powerful creatures. When it reaches the end, the final boss is summoned and the end of the game draws near. The beautifully sculpted dragon looks incredibly menacing as it wraps around its pedestal.

Loot often are pieces of armor that can be equipped to give extra bonuses, such as an additional die for attack or defense rolls. These go into effect immediately when they are equipped. They are laid under the hero cards to show what each bonus gives, and it adds to the feel of equipping armor since they go under the left, right, top, or bottom of the card. It also is easy to read how many dice are added since they are only laid partially laid under.

The Consul has the ability to add new creatures from the spawning point and move creatures toward the heroes to attack them. The minions are weaker, but they are summoned in groups to make up for their weakness, with some of them being more powerful if they are next to other creatures. They also have special abilities, and often these special abilities are related to how many alike creatures are next to each other.

A few problems do appear in Super Dungeon Explore. The full game is long. Even experienced gamers playing rapidly can take more than two hours for the “16-bit” game. The “SUPER” version can last even longer. Be sure to carve a large chunk of time if you want to play through the entire game.

If you have people who have played games like this, the Consul will be challenged to win. If no one has played before, the poor soul populating the dungeon has an uphill climb. Having some tips as the Consul in the rulebook would be a welcome addition.

The anime figures and artwork can be a put-off for some people because it’s a style they don’t care for. It also can make it seem like Super Dungeon Explore is easy to pick up and friendly to newcomers to the genre. I would probably bring out one of the D&D Adventure games for newcomers and bring this out after they got bored of it before moving to something with a campaign like Descent.

While the tiles that make up the dungeon change the setup each time, destroying the obelisks and defeating the boss at the end make up the only objectives available. Rules to change the timing of the boss or ways to tip the hand in favor of the Consul or the heroes could have provided a way to change up the game even more.

I would have liked more variety in the monsters. Most are of the minion type, since most of the obelisks provided spit out that creature. Only one spits out dragon-type grunts. However, expansions resolve that issue.

If you ever dreamed of a table top version of Gauntlet, then Super Dungeon Explore is your game. It is a hack and slash, fight the monsters, destroy the spawn point, and beat the boss board game. The figures are solid and the mechanics sound. Just be sure you have some prep time to put the figures together, and be aware you might be playing the bad guy if it’s your copy on the table.

While not working as a Database Administrator, Keith Schleicher has been associated with Gaming Trend since 2003. While his love of video games started with the Telestar Alpha (a pong console with four different games), he trule started playing video games when he received the ill-fated TI-99/4A. While the Speech Synthesizer seemed to be the height of gaming, eventually a 286 AT computer running at 8/12 Hz and a CGA monitor would be his outlet for a while. Eventually he’d graduate to 386, 486, Pentium, and Athlon systems, building some of those systems while doing some hardware reviews and attending Comdex. With the release of the Dreamcast that started his conversion to the console world. Since then he has acquired an NES, SNES, PS2, PS3, PSP, GBA-SP, DS, Xbox, Xbox 360, Gamecube, and Wii. While not playing video games he enjoys bowling, reading, playing board games, listening to music, and watching movies and TV. He originally hails from Wisconsin but is now living in Michigan with his wife and son.
Related Articles: Super Dungeon Explore, Tabletop
Share
Tweet
Share
Submit