When you think of early video games, Pong should be one that quickly comes to mind. That simple classic where two paddles move up and down in order to hit a ball bouncing back and forth between the two of them. If the ball passes one of the paddles, the other paddle gets a point. Well, since we’ve tweaked and altered so many other classics, why not do the same with Pong? What if Pong had some RPG and dating sim aspects mixed in? Hypergalactic Psychic Table Tennis 3000 is our answer with its simple yet quirky twist that is a joy to play, especially for the low price of $2!

Early on, Hypergalactic Psychic Table Tennis 3000 feels just like the original Pong. You control your paddle and hit the ball in order to score three points during a match. The main difference early on is that the other paddles typically won’t look like yours. You’re the relatively slim and moderately tall white paddle, while other paddles come in all sorts of colors, heights, and widths. It keeps things from getting repetitive compared to facing off against a clone of yourself every time. The varying dimensions of opposing paddles can give them advantages as well as disadvantages; one paddle may be taller and have an easier time blocking your shots, while another may be small and be forced to play more carefully. You’ll want to take these aspects into account while you play. 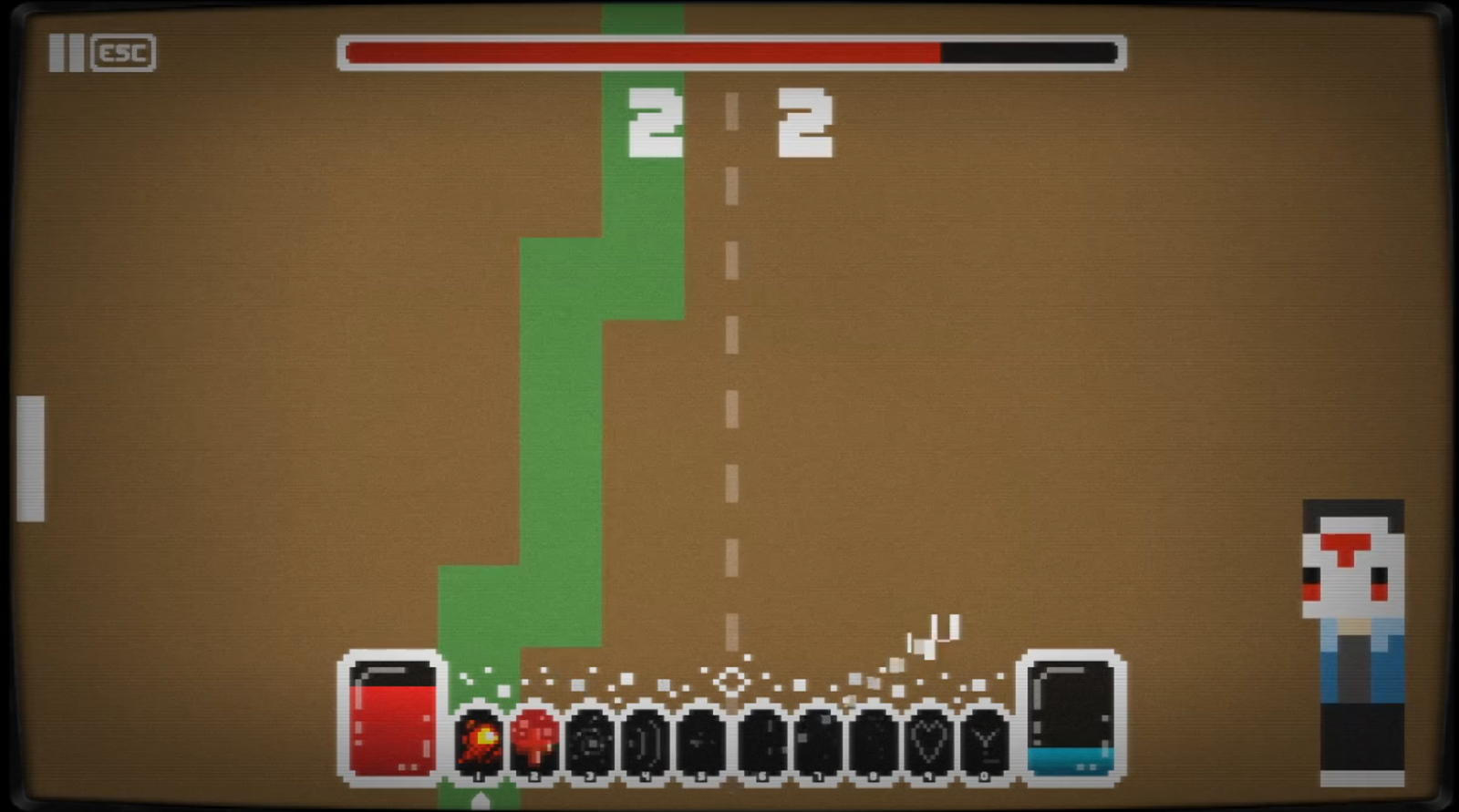 The game tasks you with winning 200 matches in order to complete the campaign. Before each match, you’re given the level number, the paddle’s name, a description of them, and their health (more on that later). It’s designed to give each paddle more character and also sprinkles in some goofy or clever lines to go along with them. For example, Dark Knight’s description mentions that he fights evil and he believes you are evil. As odd as it may seem, there’s a slight story that exists underneath the surface. The upfront story is that you’re facing off against these other paddles with the goal of being the Hypergalactic Psychic Table Tennis champion, but near the end of the campaign, there’s occasional hints at something deeper going on. Nothing major, but it does connect to the champion goal. I won’t spoil it, but the little last minute details are oddly philosophical for a game like this. I found them to be interesting additions, but maybe not everyone will feel the same.

As mentioned earlier, this game is like Pong with RPG and dating sim mechanics mixed in. In terms of RPG aspects, your paddle has a health bar, a mana bar, a selection of spells, stats, and can level up. Your opponents also have these, but you can only see their health bar. Your health goes down each time you hit the ball and each time you get hit by an enemy’s spell. If either you or your opponent’s health bar empties, then that paddle explodes, leaving their goal defenseless. This makes destroying your opponent an alternative strategy for scoring. Once someone has scored after a paddle has died, that paddle respawns. Unfortunately for the surviving paddle, their health stays at whatever it was before; they don’t get healed. The survival nature of matches makes the game much more interesting since it keeps things from becoming a never-ending back and forth similar to how original Pong could become. That being said, everything is refilled when you face a new paddle. 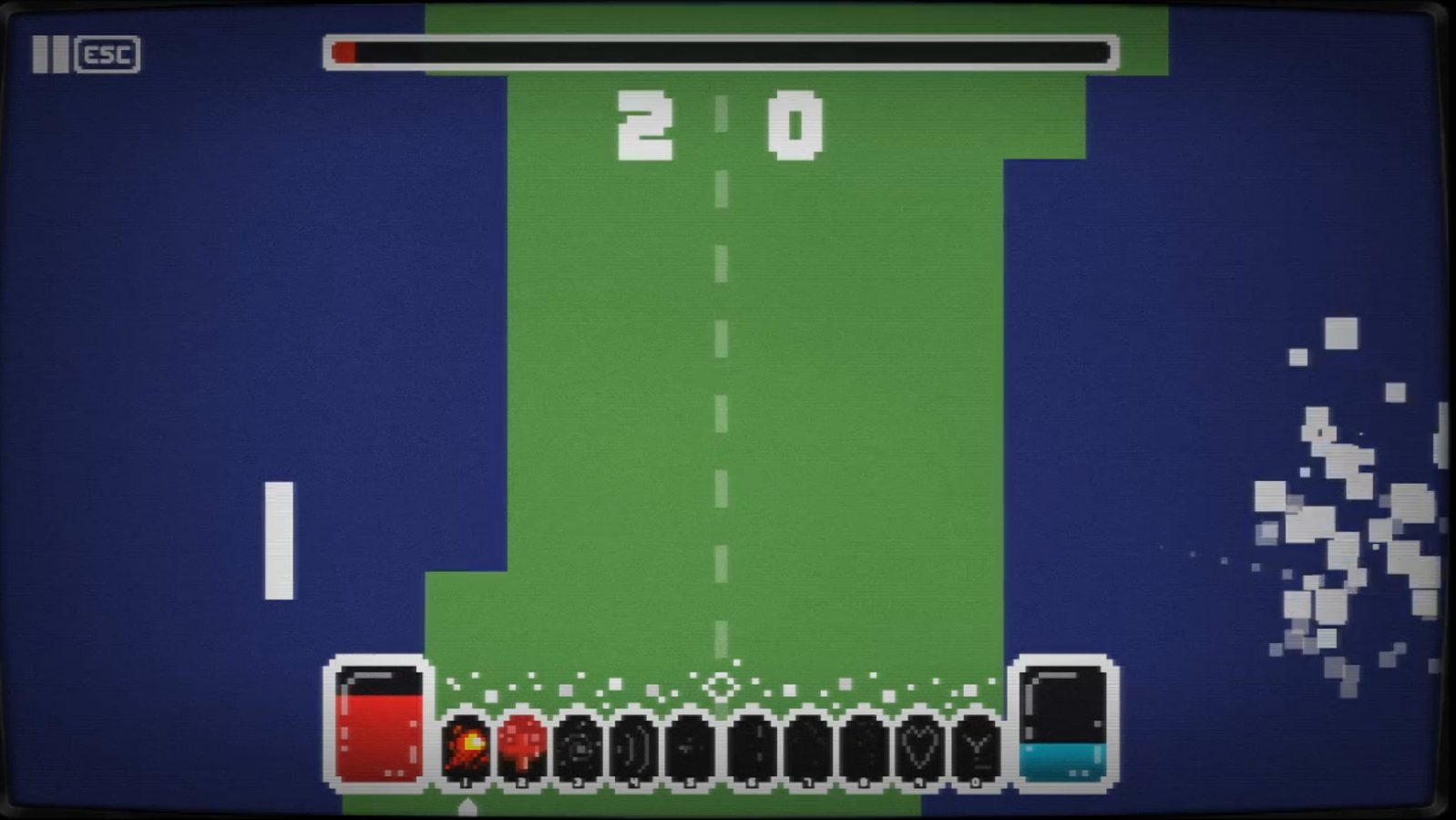 The mana bar is used for activating spells, but you won’t have any at the start. As you level up, you’ll have opportunities to learn spells such as fireball, heal, stone cold, and six others. They all have their uses, whether they be for offense or defense. For example, fireball can either damage an opponent directly or it can knock the ball back and set it on fire without your paddle taking any damage. Two of my favorite spells are heal and stone cold. Heal is incredibly helpful and allows you to last longer before exploding (if you even let it get to that point), while stone cold completely immobilizes your opponent for a short time. In hindsight, it’s an extremely cheap spell, but against the AI, who really cares? That being said, each spell has its own cooldown, so don’t go expecting to spam spells until your mana runs out. Side note, mana passively regenerates during the match.

Leveling up works similar to most other games, except that you automatically gain a level after each match. The first few level ups only give you the one option of upgrade, but that’s for the sake of getting things started. After some time, you’ll get two options per victory. You’ll get choices such as increasing the max health or mana that you earn from winning, increasing strength, agility, charisma, intelligence, wisdom, height, width, learning a new spell, and so on. The choice is yours, so choose based on how you want to play and what you think will be most beneficial. I personally opted for prioritizing spells, intelligence, and wisdom, with health and mana buffs being right after those. Seeing how much more versatile and capable your paddle is later on feels great. Near the end, I couldn’t imagine going back to that bland little paddle I once was. 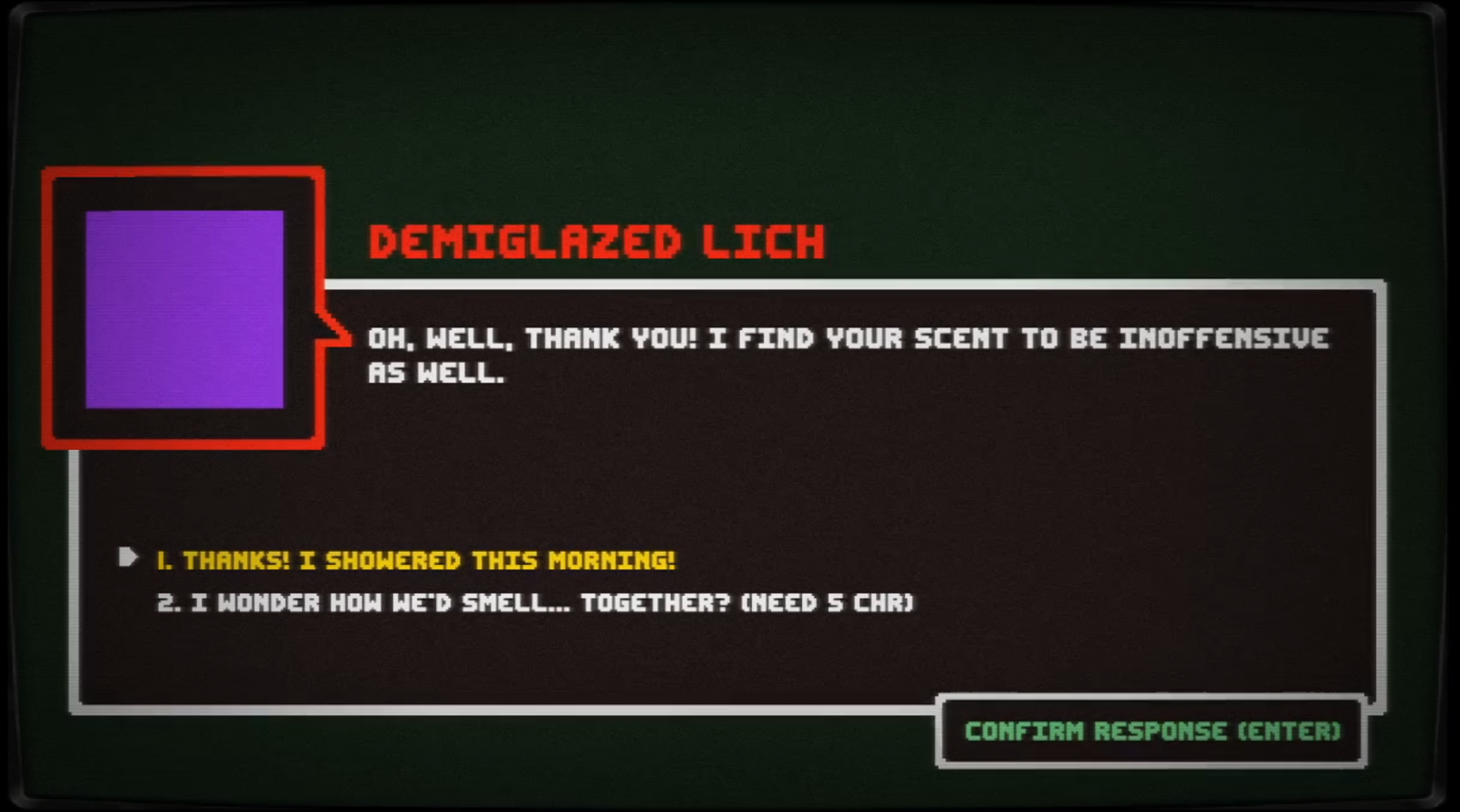 The dating sim aspect shows up as you being able to romance paddles. Yeah, that sounds super weird, but just follow me on this. Throughout the game there are boss paddles, and if you’ve acquired listening skills from leveling up, then they’ll talk to you after someone has scored. A dialogue box pops up and after you read what they say, you have two or three options of responses. Some can be chosen normally, while others can only be selected if you meet a certain stat requirement. It’s a nice homage to RPGs where you need a certain amount of charisma points to charm someone or a specific level of strength to impress them. If you choose right, then you’ll either talk more in the hopes of romancing them, or that first choice may be enough to win them over. Romancing a paddle puts a heart over their head and gives you a sense of pride, while failing only annoys them and disheartens you. There’s no gameplay change caused by your results, it’s more of a goofy little side activity. It adds a bit more to do, so why not give it a shot? It only takes a few seconds anyway. 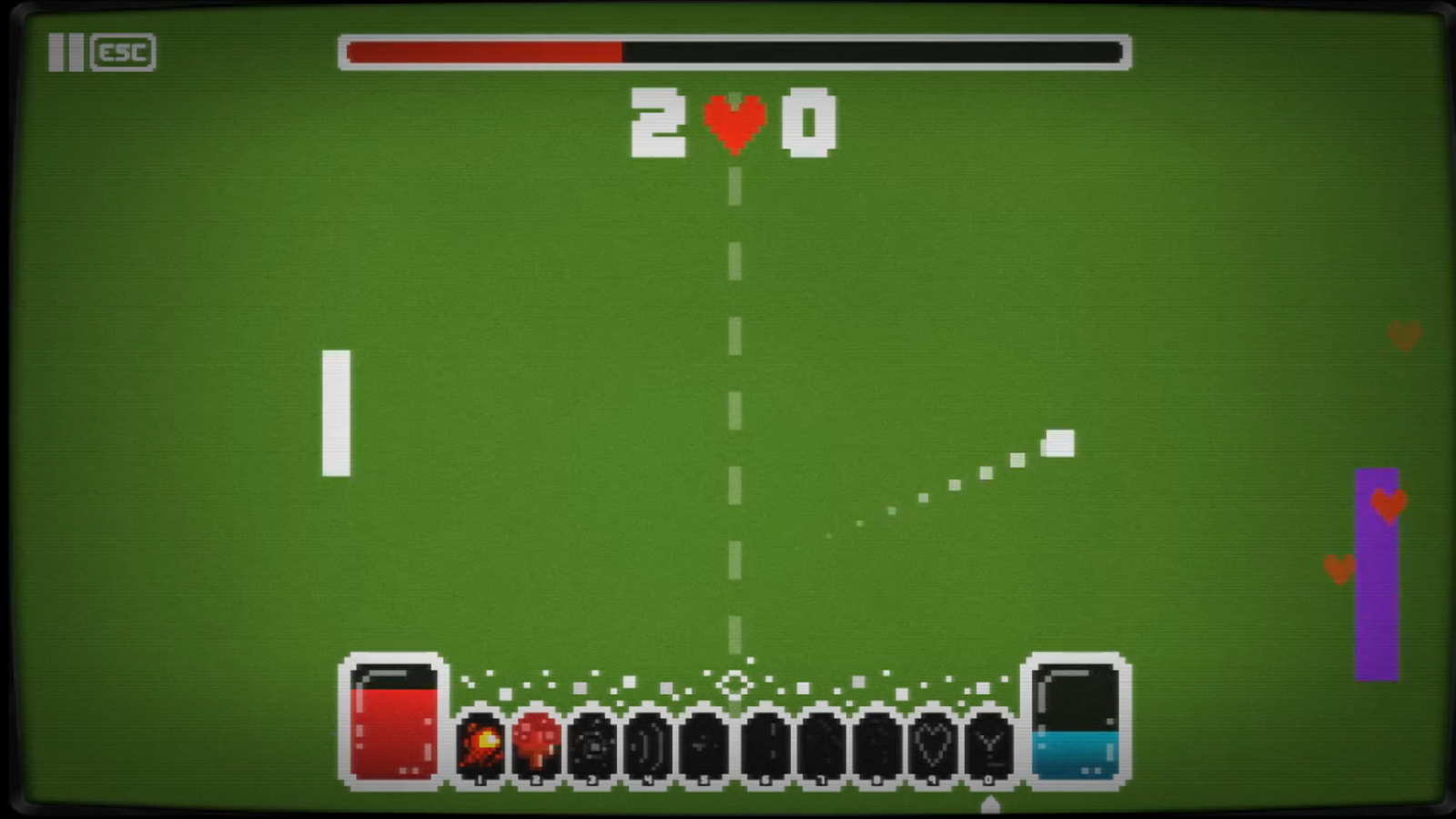 In terms of graphics and sound design, there’s nothing here that will wow you, but that’s not the point. It’s a $2 quirky twist on Pong, so they likely wanted to stay close to the feel of the original while also making it feel different enough. You still have your blocky textures and little sound, although you can unlock a skill that provides background music. One neat and unexpected thing is that the game has voice acting by Mark Meer, even if it’s just some callouts when leveling up and during matches. For fans of the Mass Effect series, you’ll better know Mark as the male Commander Shepard. Even better, one of his random callouts is “this is my favorite table tennis joint on the Citadel.” What a callback to the Mass Effect series, and in such a random game to boot! All in all, Hypergalactic Psychic Table Tennis 3000 is a neat twist on the classic Pong. Sure, gameplay may get a bit repetitive, but the extra bells and whistles help keep things fresh. It may not do anything spectacular, but it does enough to keep you playing a game from the dawn of video gaming. Not only that, but it’s $2, so I’d say it’s easily worth that price.

Hypergalactic Psychic Table Tennis 3000 is a quirky twist on the classic Pong, where RPG and dating sim mechanics are added. Gameplay may get a bit repetitive, but health bars, spells, leveling up, and romancing add more depth to the game as a whole. With a low $2 price tag, and plenty of paddles to face, you've got a great reason to hop on in.

Codi loves to play video games and watch movies. He will watch almost any kind of movie just to experience them. His ideas take inspiration from the shows and movies he watches, and games he plays. He also loves a good pun.
Related Articles: Hypergalactic Psychic Table Tennis 3000
Share
Tweet
Share
Submit