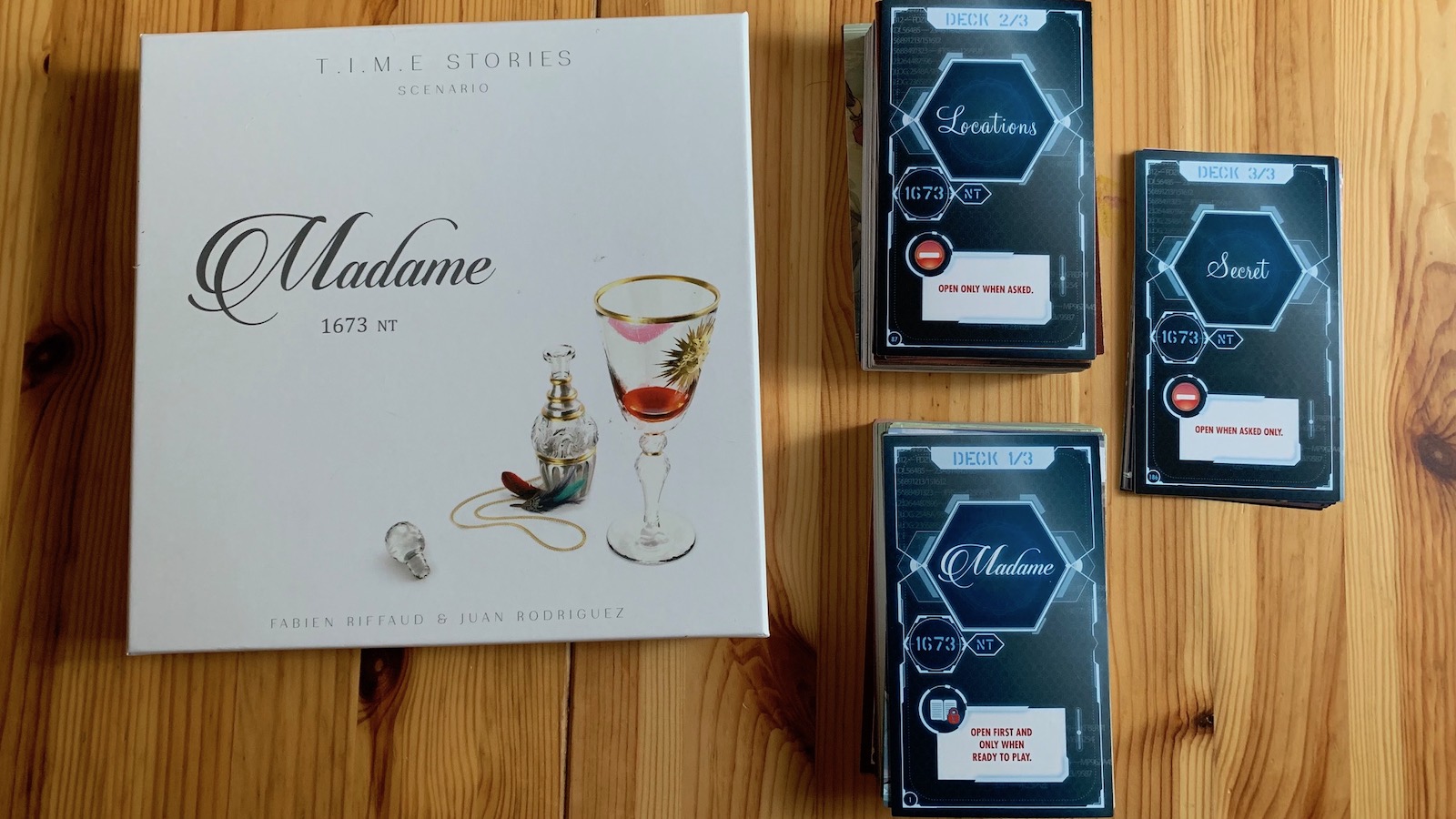 Let’s travel through time! Where (or when) to? Let’s get into our Caissons and find out!

Madame is the latest chapter of the T.I.M.E. stories saga. In this adventure, you and two or three others travel back to Versailles in the late 1600s. You are tasked with “Collecting Louis XIV’s Temporal Imprint” This is something you’ve never done before in the game, and takes some explaining. 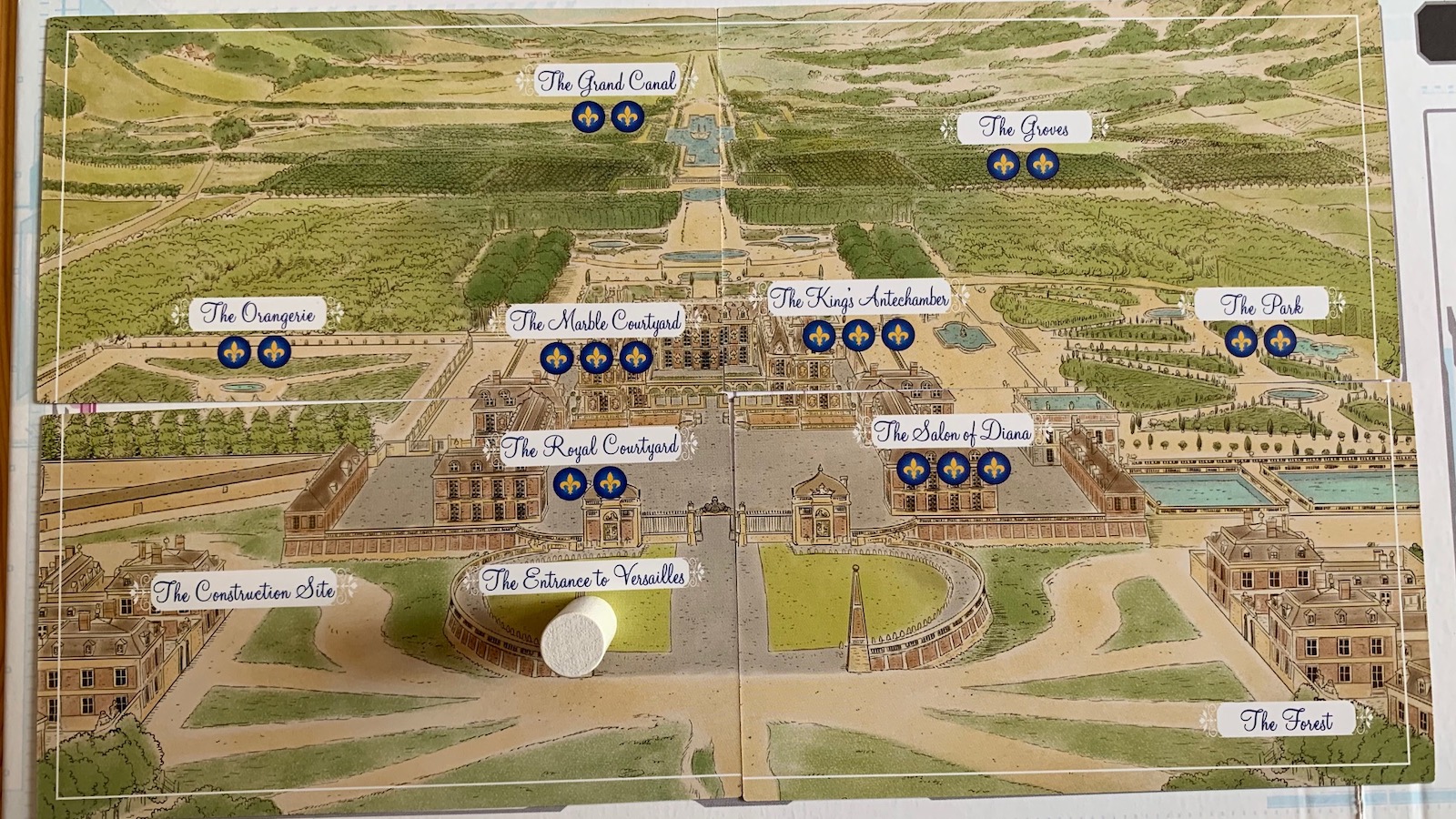 For those of you who are unaware,T.I.M.E. Stories was most accurately described to me by a friend as “Quantum Leap: The board game”. 2-4 players travel back in time and fix “what once went wrong”. In the base game you all travel back to an asylum and take the roles of its inhabitants. Most (but not all) of these scenarios give each player the option to pick one of many people to leap back into. The player then assumes this role, with all of that character’s strengths and weaknesses. 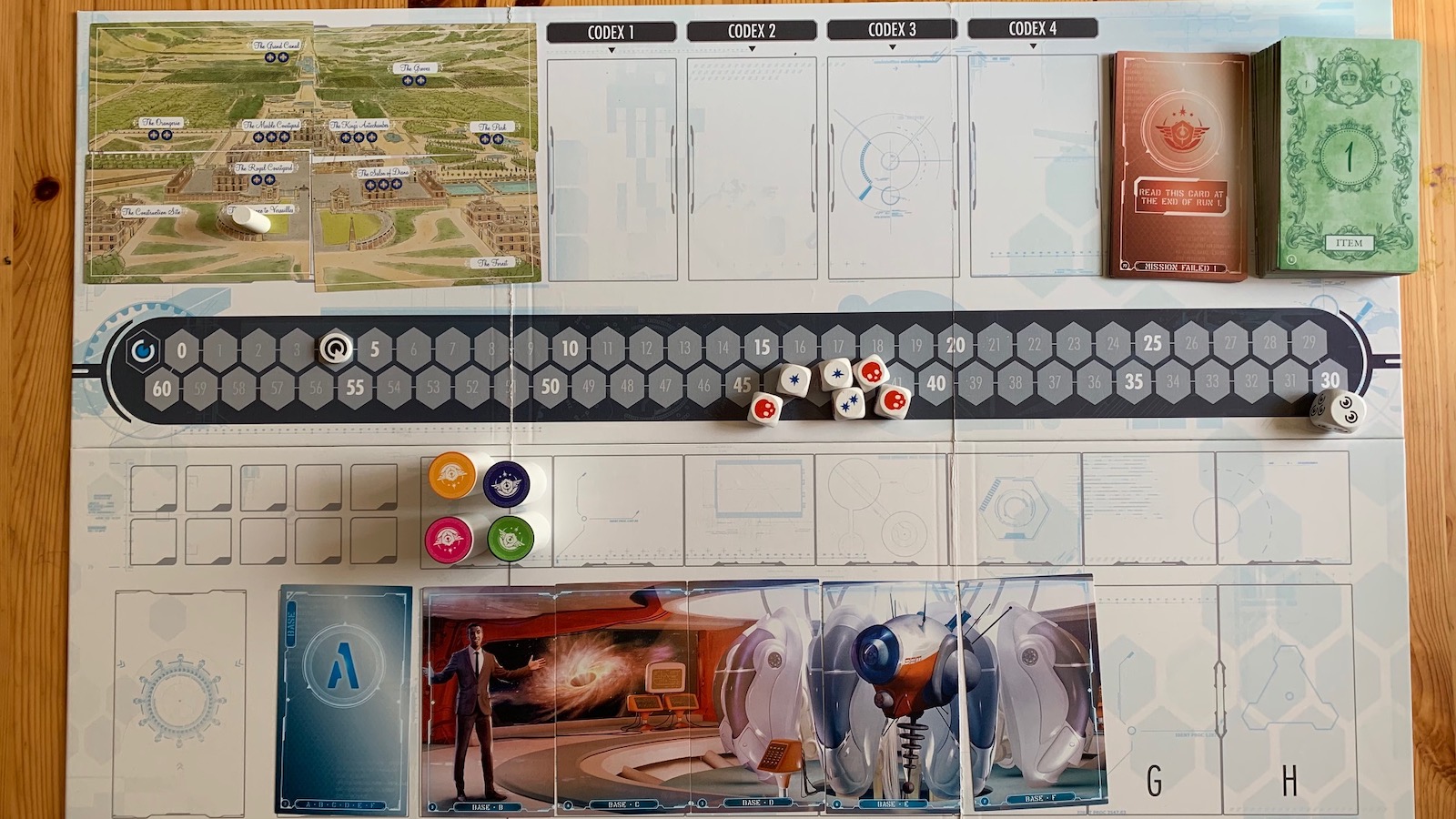 The players are given a set amount of time in which they need to complete the task. This is shown by the TU (Time Unit) tracker. The current areas the players occupy are laid out in a specific order, and the artwork on the back of the cards creates a panoramic view of the scene. The scene is described to them and, based on their skills, the players decide where to explore. They then turn over the location cards and read them. If other characters join them in that specific space, they can share the card or read it verbatim. If they are alone, they must do their best to take notes or describe what is happening there. This is important because many of the puzzles in the game depend on being perceptive and keeping detailed notes. Should a player wash over important subtleties, the whole mission could be doomed.

These spaces could have a scene that the players must observe for clues, an absolute dead end with nothing to learn, or some sort of encounter. Encounters are sometimes puzzles, a simple conversation in which players have to use their skills to get their desired result, or it could be a fight. When a fight arises, markers are placed on the space. These need to be removed in order to win the fight. The player looks at the skill being tested, and rolls their skill value in dice. For each hit they roll, a marker is removed, but any skull they roll is added to any skull markers present and they are attacked for that amount of hit points. Don’t worry; if anyone dies, they are allowed to return later. This is a time traveling game after all, and we can just try again. A victorious test often results in more info, a new open door, or items. Sometimes though, the only reward is escaping with your life.

Players continue making their way through these areas until they solve the mystery, or time runs out. Time WILL run out your first run, as there are many false leads and pitfalls to fall victim to. Any time the players need to retry a test, move to another space in their current area, or move to another area, they spend time units. When they reach 0 time units, they fail the mission, and the players are pulled back to the start to regroup and try again. It takes many attempts to figure out the right sequence of actions to take to even put the players in the right areas with the right items to figure out what is going on, and finally have a successful mission. It’s a lot of repetition, which is sometimes frustrating, but makes your eventual success that much more satisfying. Usually when you are sent back, the rules are changed a bit in your favor.

If one ever grows tired of banging their head against the wall with these challenges, they can take a break at any time. The makers have designed a very clever plastic insert that lets players pause their game at any time should they not take the 5-6 hours sometimes required to successfully work their way through a scenario. You can even quit mid scenario, and this insert lets you save your progress. This is a huge deal for anyone who has a cat and knows they can’t just leave games on the table and expect them not to be tampered with.

The game looks great, with its futuristic clean white theme, solid wood pieces, and custom dice. The stickers you are meant to affix to the top of said pieces don’t fit well, but they do the job. The scenarios offer detailed art in every panorama. I’ve heard people complain that the art differs too much from box to box, but I feel that each story is unique, so why shouldn’t the art reflect that?

This game is perfect for a group that may consist of people not as comfortable with complicated tabletop games. The mechanics are so easy to figure out, that just about anyone can get right to the puzzle at hand. But always make sure you take extensive notes, or you’ll never make it out.

OK, BACK TO MADAME. 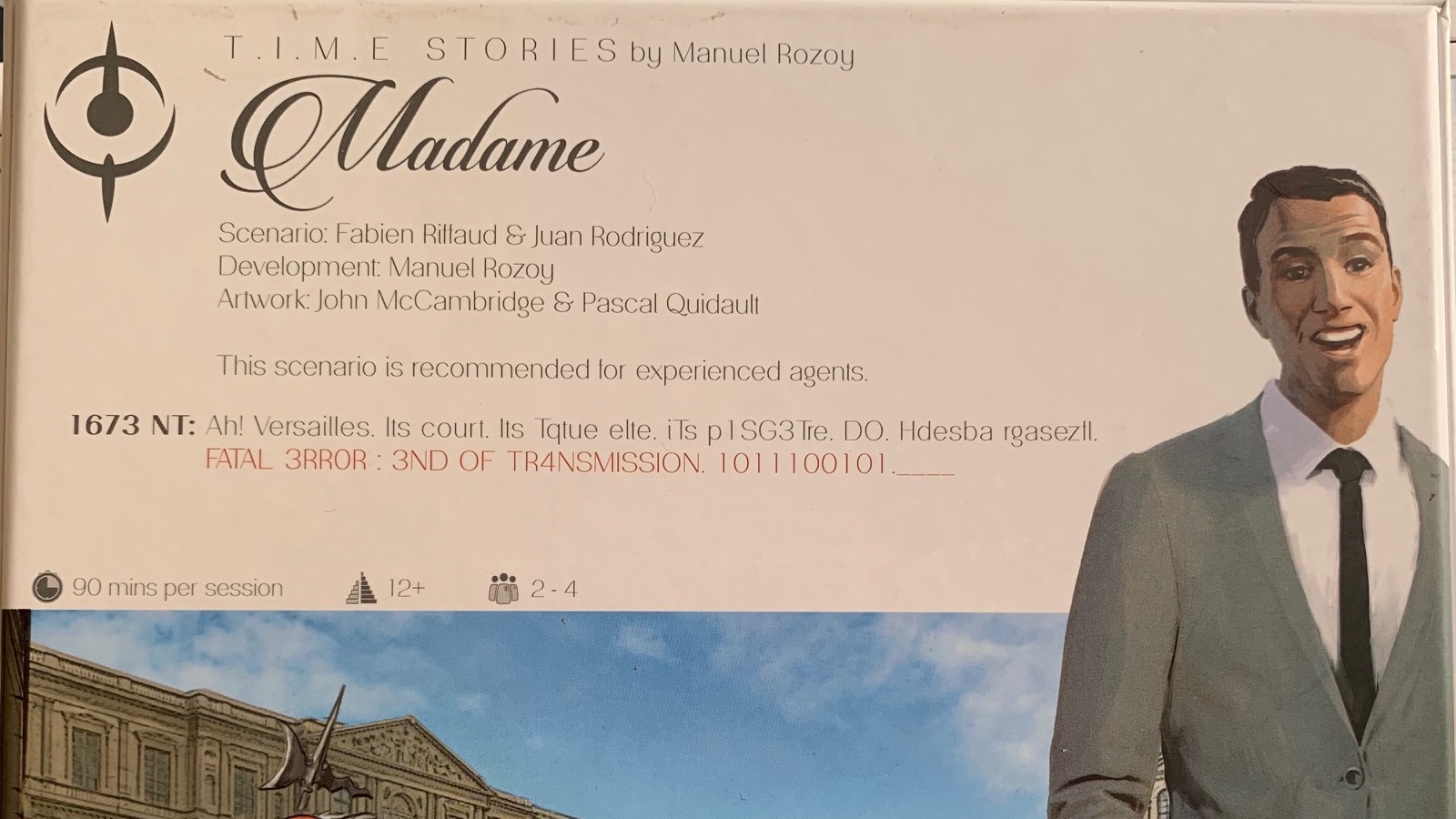 I’m going to be very vague here, as T.I.M.E. Stories deals in a lot of secrets. I will do my best to be 100% spoiler free. The very beginning of this scenario is different than most, and intriguing from the start. The players are instructed to take items 1-4 to start, and to give themselves 4 TU. Wait, 4? The original scenario gave us 25, and we failed several times! Yes, you will be failing constantly in this scenario. The items you were given are the 4 characters you can play. Unlike most scenarios, you don’t have any choice as to who your starting characters are. The only thing I’ll tell you that could even be considered a spoiler is that you need to get more character options, and that is where this new skill “Temporal Imprint” comes in. You need to figure out how to use this skill well to amass the right crew to solve this scenario. Just like any T.I.M.E. Stories game, there are puzzles and battles along the way, but this one is more about WHO you are rather than what you do in many cases. It’s pretty difficult to figure this all out in the short amount of time they give you, but like I said, they clearly intend for you to fail A LOT. 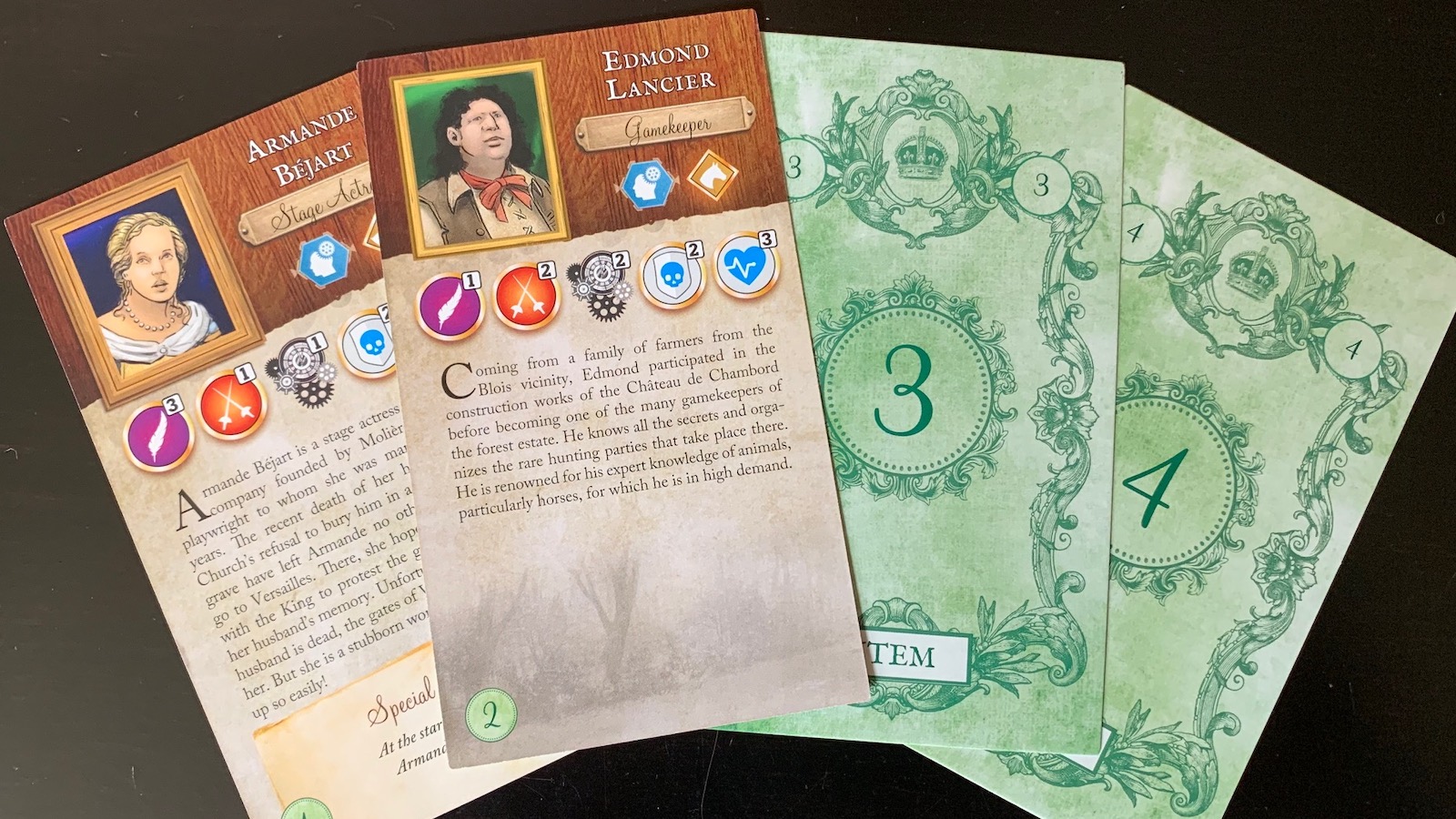 Despite the above average failure count in this chapter, we enjoyed ourselves quite a bit. The little information given at first had us scratching our heads and wanting to go back and learn more. We did find ourselves in a predicament where we chose the wrong crew, and were stuck with an entire run lost without anything we can work on in the meantime. Most scenarios have something you can work on or achieve while you wait out a failed run, but in this instance, we just had to reset and accepted the penalties for our failure, powerless to do anything else. That run was more frustrating than most. Sure, it was our fault for not preparing properly, but it really took you out of the narrative to just look at each other and ask “So, what do we do now? Should we just start over?”

The only other thing we didn’t enjoy was that this was an end to a large overarching story, and we hadn’t played the other chapters of it, so we didn’t fully understand what was happening. Should you choose to do the same, you can play the chapter just fine, we enjoyed the story within the story quite a bit. I would suggest not starting here though. There is a specific order that these scenarios were released, and even though a lot of them seem like they are not part of a larger tale, they are intended to be played in this order.

We love the challenge and eventual satisfaction of this game, and had a lot of fun with this scenario, despite being slightly confused at the end. This game is one of our most played games at home, but people should be warned before purchasing it that everything you buy is a one time deal. These scenarios are puzzles, and once you crack them, there’s no point in playing it anymore. You have to move on to the next one to keep playing and discovering. One must decide if this is worth the price tag. At around $30 a piece for the base game and each scenario, it won’t break the bank, but that’s $30 more and that much less shelf space each time you start a new story.

If none of that bothers you, get this game. It’s not the most well-constructed of T.I.M.E. Stories’ offerings, but it can lead you to a fun time. The short time and high rate of failure is frustrating at first, but it gets better as you figure it out. The main puzzle of who to recruit and take along was a welcome change in a game that seems like it has done it all before. Just make some friends who also love this game, and trade so the financial burden isn’t only your own.

Madame is another fun scenario in the T.I.M.E. Stories universe. Prepare for more repetition than most, and possibly painting yourself in a corner with no way out. If you love the series, and are up to date on the story, check it out.

Nick Cvercko is a 37 year old fella from Flagstaff Arizona that lives with his wife and pets in Austin TX. You can find him at Lamberts Downtown BBQ mixing up all the tasty drinks. He may be a little too in to board games.
Related Articles: T.I.M.E. Stories - Madame, Tabletop
Share
Tweet
Share
Submit