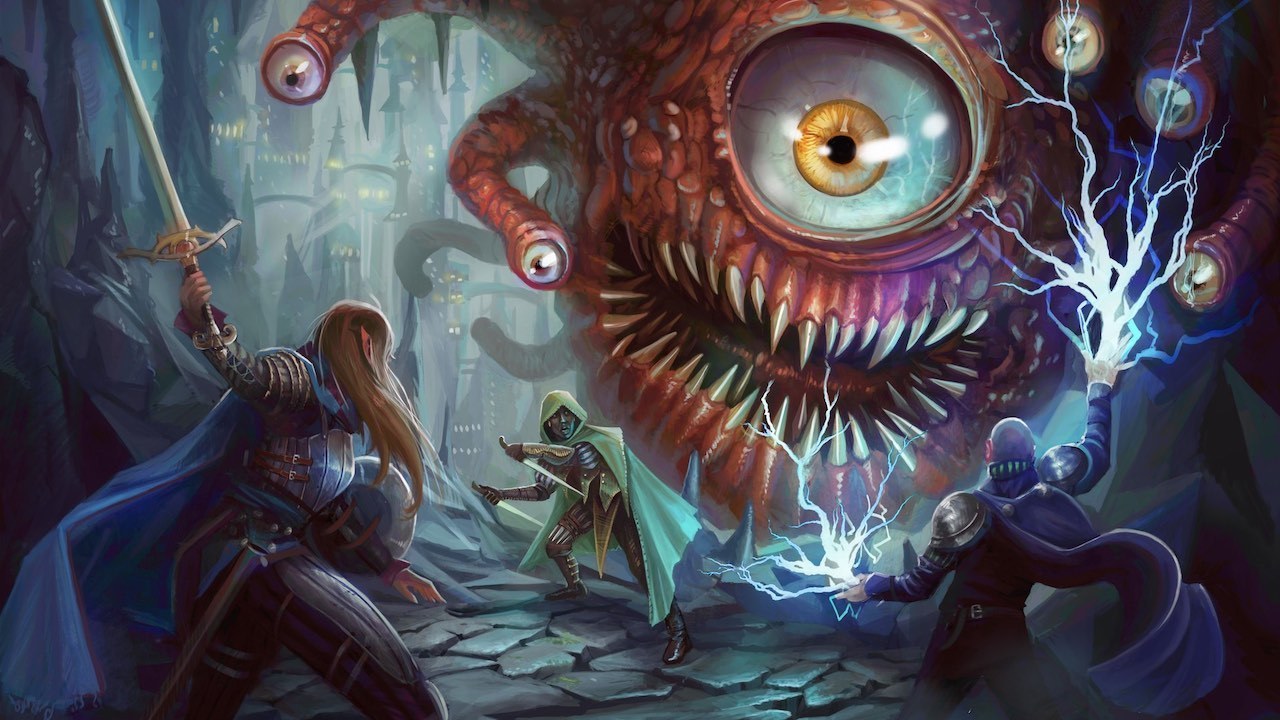 Much and more has been said about the incredible storylines in Black Isle Studios and BioWare’s incredible slate of epic RPGs including Baldur’s Gate, Baldur’s Gate II, Planescape: Torment, and Icewind Dale. Developer/Publisher Beamdog has taken all of these incredible properties under their wing and given them a fresh coat of glossy polish, releasing “Enhanced Editions” that contain all of the DLC for those games (they were called “Expansion Packs” back then), as well as literally thousands of improvements including new party members, locations, languages, updated graphics and resolutions, and most amazingly, cross-platform multiplayer. I’m not going to rehash those reviews (ok, maybe I’ll raise up the recent Planescape: Torment review I did), but instead we’ll focus on how these four look and play on the Nintendo Switch.

The most aggressive requirements for these four Enhanced Edition versions requires a 1GHz CPU, with 512 MB of RAM to run. The Nintendo Switch is well suited to the task as the device sports a 1.02 GHz processor and 4GB of memory. With the bases covered fully, these four games should run like a dream, provided you have 5.6 GB of space for the Baldur’s Gate and Baldur’s Gate II pack, and 4.1 GB set aside for Planescape: Torment and Icewind Dale to store them. 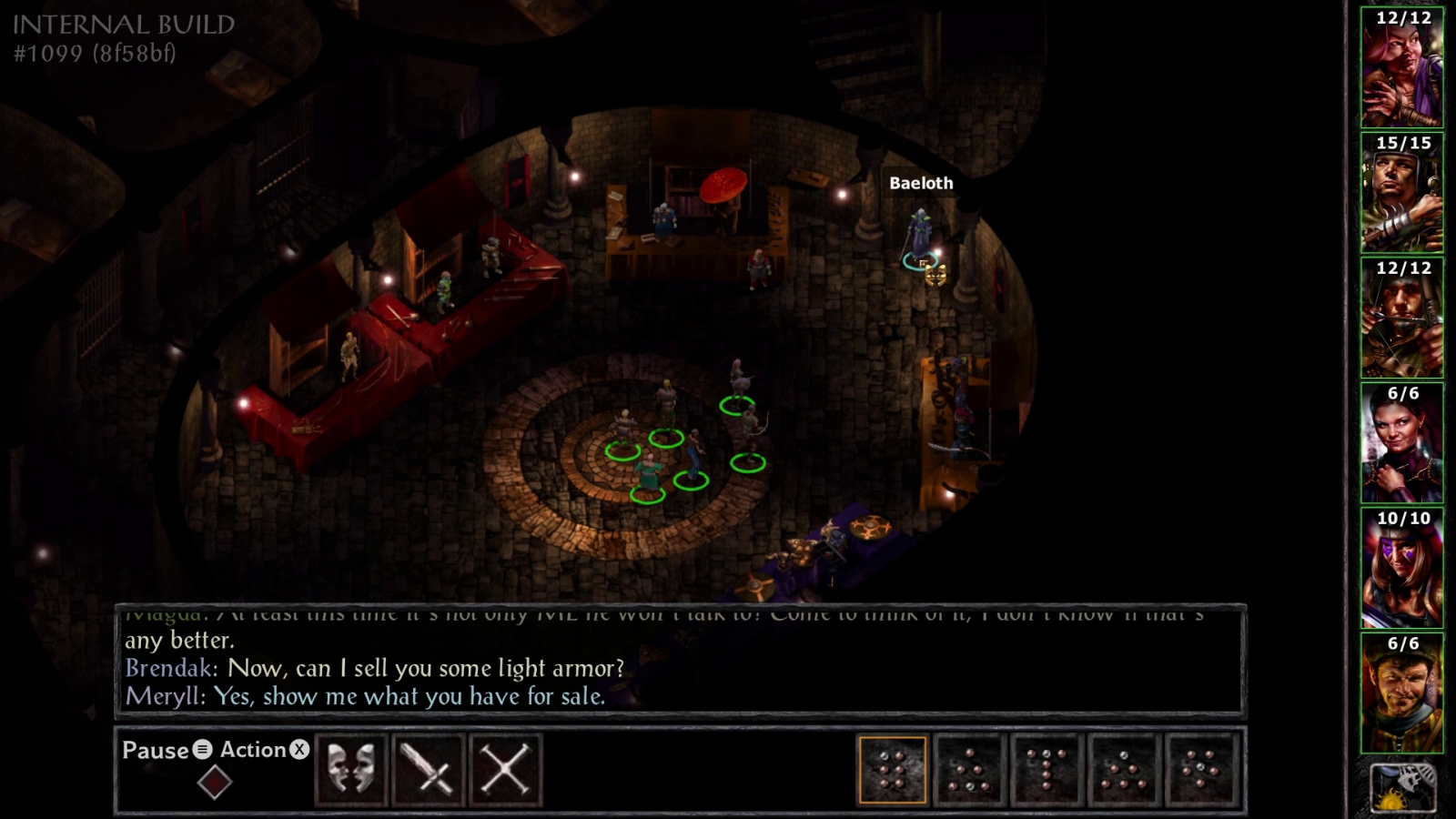 Welcome to the Black Pits — the expansion for Baldur’s Gate.

While I’m not re-reviewing the games, it’s important to know going in that all four of these games come from 1998 to 2000. As such, it’s a trip down memory lane. You’ll see the early fledgling pieces that would become the Bioware staple morality engine. You’ll also find an incredibly dense storyline, but it is buried in literally 1.2 million words in the first Baldur’s Gate, 1.5 million words in the sequel, 582,000 in Icewind Dale, and 800,000 in Planescape: Torment. Know that, unlike modern titles, very few of these lines are voiced, so be prepared for some serious reading.

One of the things I appreciate across all four titles is that Overhaul Games (they are the development arm of Beamdog) has taken the time to fix the objectively painful original cutscenes. No longer does Irenicus totter out like a Weeble Wobble on ice to take on the generic armored fighter in the opening cutscene. The stylized hand-drawn introduction of Baldur’s Gate II holds up well, needing very little upgrade. Throne of Bhaal’s introduction is hair raisingly amazing, and Icewind Dale’s ultra-grainy introduction is now smooth and gorgeous. Planescape: Torment’s intro easily looks the most wooden, but it’s no less impactful. Thankfully, all of them have transitioned to widescreen format, as are the rest of the games. 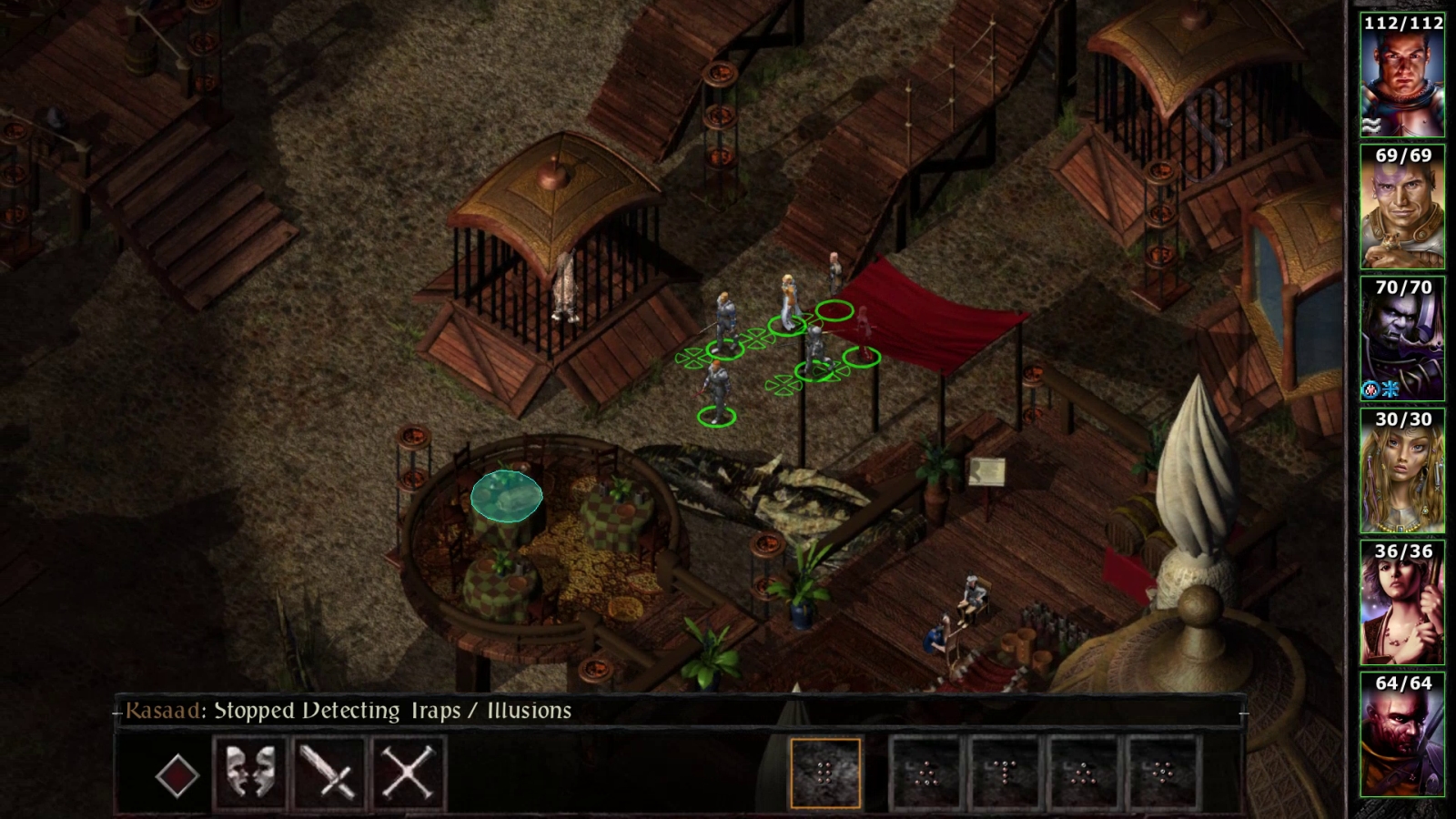 The bazaar is always full of wondrous objects in Baldur’s Gate II.

When I said that these Enhanced Editions contain all of the available expansion packs, which also includes the Siege of Dragonspear expansion that hit in March 2016, as well as the Black Pit horde-esque modes that were bolted on as secondary modes for both Baldur’s Gate titles. The Siege of Dragonspear fills in the intermediate space between the two titles. While Caelar Argent is no Jon Irenicus, it fits in nicely with the look and feel of the originals and is a welcome addition.

If you are wondering, “Am I going to get my money’s worth” out of these games, each one of them is epic length. Baldur’s Gate will take you roughly 60 hours, plus another dozen or so for Siegespier. The sequel rings in at around 80 or so hours, with Throne of Bhaal adding upwards of another 30-40 hours. Planescape: Torment is a bit shorter at around 45 hours, with Icewind Dale coming in at a still-reasonable 40 hours to complete, plus another dozen or so hours for the Heart of Winter expansion and Trials of the Luremaster side content. You won’t beat any of these games over a long weekend unless you are trying for the Iron Bladder achievement. 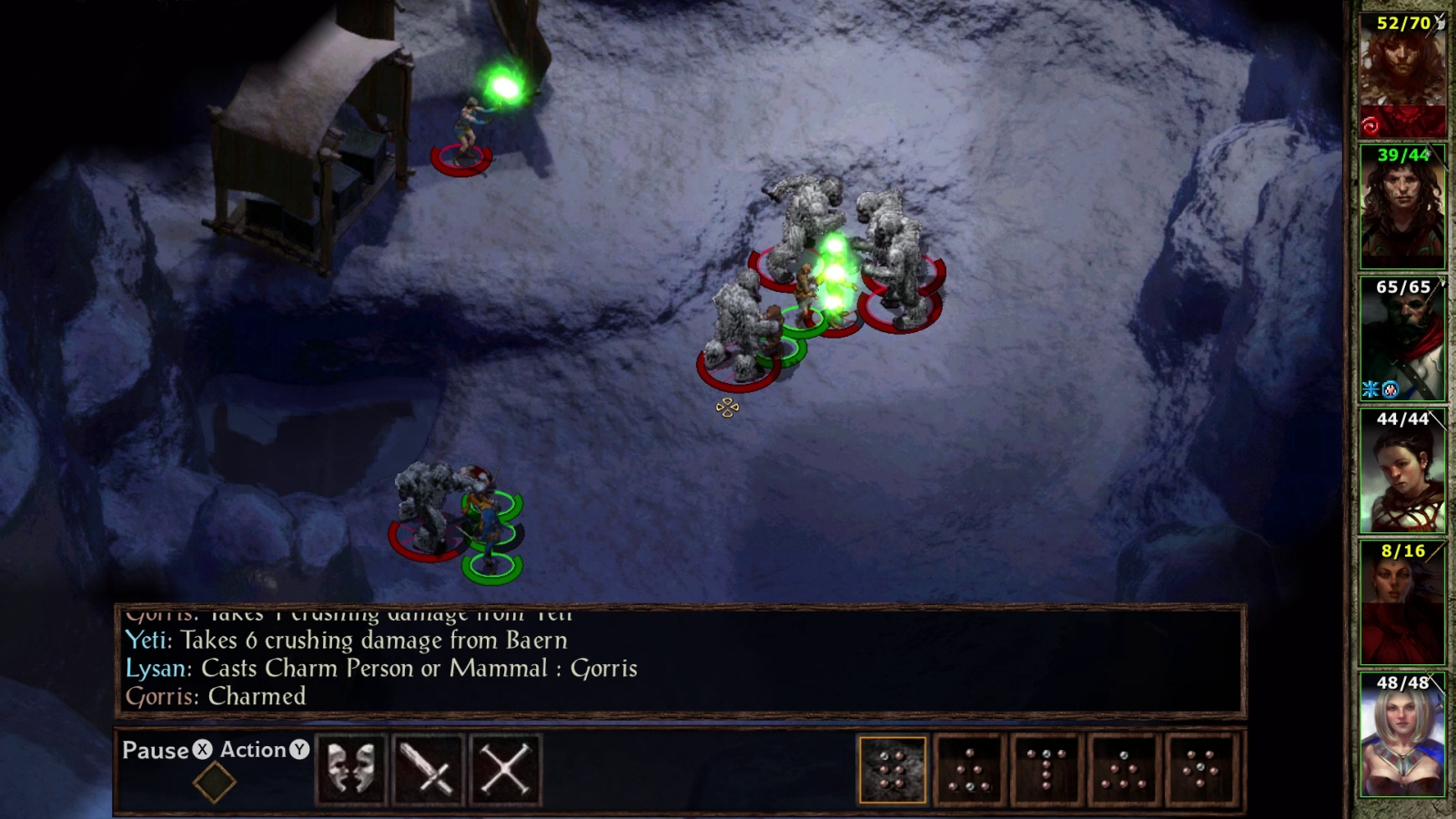 There are a couple of hiccups that I ran into with all four of the titles. Thankfully, you can crank the font to what can only be described as a ridiculous level, but there are still a few moments where it becomes very clear that you are running the game on a screen only slightly larger than a phone while undocked. For example, transitioning to the World Map leaves you with some hard to read destinations on the map itself, though the text box on top will let you know where you are going. Similarly, you can zoom in closer to the action, or back out to see a wider view of the map, but zoom in too far and you’ll be treated to some very rough sprites. None of it is unexpected for games that are nearly 20 years old, and after all — these are Enhanced versions of the Infinity Engine, not a Remastered version.

I mentioned that the Enhanced Editions of Baldur’s Gate, Baldur’s Gate II, and Icewind Dale all have cross-platform multiplayer (it would make zero sense for The Nameless One to suddenly have multiple players), and that’s true on PC, Mac, Android, and iOS. At launch there is a “coming soon” sign hung on all of the multiplayer sections for these titles for Nintendo Switch (I’m not sure of the state on Xbox One and PlayStation 4). Nobody was beating down the door for this set of games to hit consoles, so I’m not sure why a few more weeks to iron out the multiplayer would have been a bad thing, but that’s not the state at launch. 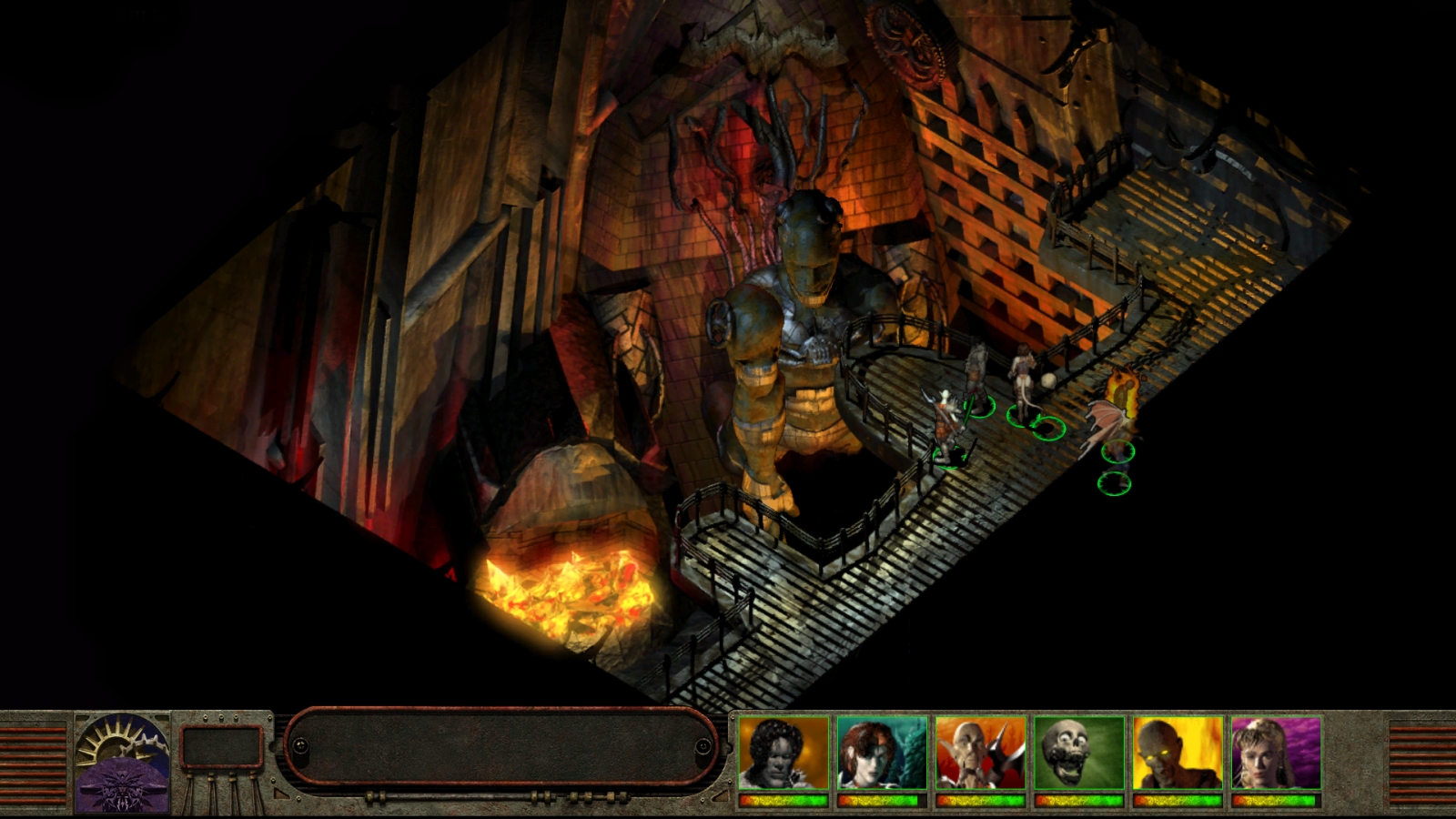 Planescape: Torment has some of the best writing in an RPG to date, IMHO.

There’s no doubt at this point that I’m burying the lead a bit. I’ve only been talking about these titles in undocked mode as taking these on the go is the biggest lure. Well, I’m happy to say that these games look as good as they do on PC when the Nintendo Switch is docked. Using a controller to carve through true evil is a little strange for a long time PC gamer, but with the use of selection wheels it all comes together nicely enough.

All of these games have been released for mobile platforms, including iOS and Android. Those versions take full advantage of the touchscreen in ways we saw with similar titles like Harebrained Schemes’ own RPG, Shadowrun. Bafflingly, the Switch version doesn’t share those characteristics. That means you can’t select your party members, navigate, or drag-select with a screen tap like you can on the iOS and Android versions. While the button controls work well enough, I can’t rightly think of a good reason why the developers chose this path for a system with a touchscreen. 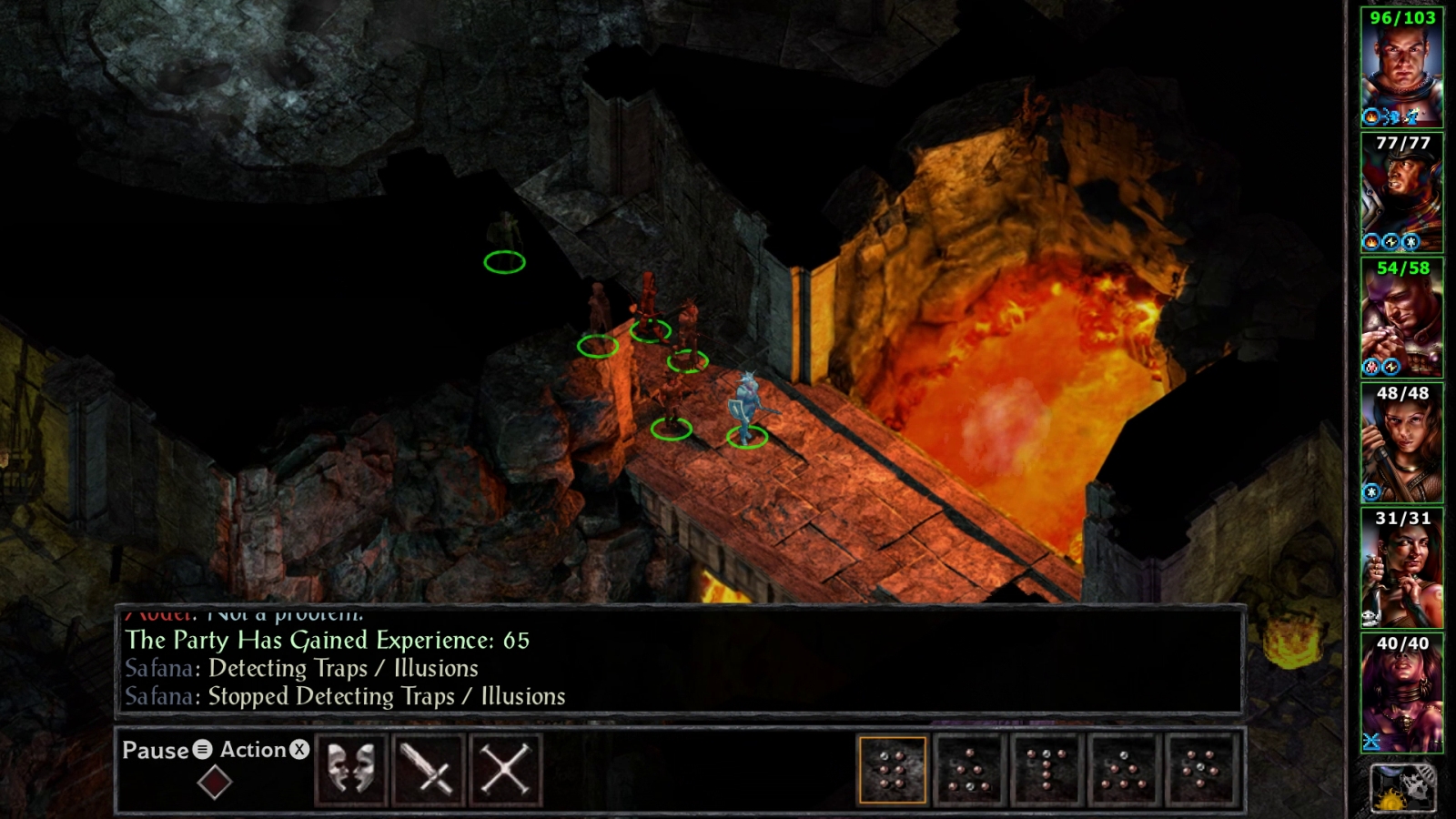 Siege of Dragonspear may be all new content if you haven’t played the Enhanced Editions.

There is one sticky wicket that makes this whole package a little heavy — the price. The Baldur’s Gate titles are bundled together for $49.99, and Planescape: Torment is bundled with Icewind Dale for another $49.99. There’s absolutely no doubt that these classics are absolute masterpieces, but they are a full $10.00 more expensive ($20 if you buy both) than the PC version. I’m not suggesting one version over another, but the PC version is highly moddable. Given the very low requirements, you might like being able to tinker under the hood.

Combined, these four games carry over 400 hours of some of the most well written RPG storylines I’ve ever played. The Enhanced Editions provide a wealth of quality of life improvements that make them bearable for new platforms. While there is bafflingly no touchscreen support for Switch, and the multiplayer is AWOL, there is simply no better way to take these wonderful RPGs on the road than the Nintendo Switch.