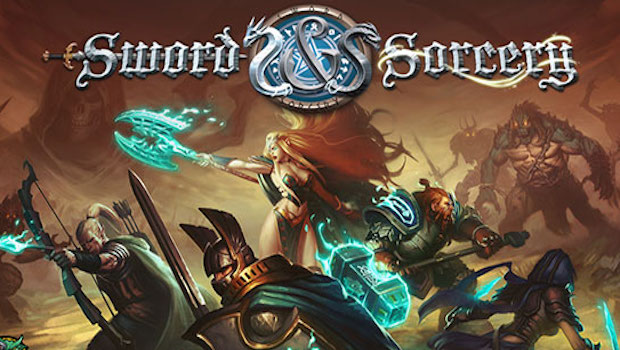 There was a time where an adventure through a murky landscape to find great treasure was restricted to a story born from a book, a die, and your own imagination. Today’s adventures now come to life with detailed miniatures, a plethora of components, and deep characters, but the essence of a good adventure still holds true. You have to have a good story. There’s no immersion without a story that draws you into the experience. Sword & Sorcery, Ares’ new adventure game, certainly hopes you immerse yourself into their fantasy world.

One to five players take on the role of a hero, recently resurrected by powerful sorcery. The recent resurrection has left your hero weak, and works as an interesting way to explain why your hero begins powerless and gains strength as the story evolves. All your typical hero personas are here: knight, sorcerer, bowman, and cleric. Sure, the elf bowman, Laegon, may be reminiscent of another fantasy elf bowmaster with a similar name, but each character has a distinct strength to vary your gameplay. To add to the possibilities, many heroes have lawful and chaotic sides to their character cards. This not only changes the character’s skills in the game but also the abilities they can acquire.

Your player is much more than their weapon. Abilities and their soul rank will help determine your success as well.

Character selection may be one of your first, and easiest, decisions, but you’ll eventually want to take those characters out into the fantasy world. The box is jammed with dozens of tokens, several map tiles, sculpted miniatures, player guides, a storybook, and all sorts of cards. It’s an impressive amount once you lay it all out, and it would be understandable if you were a little overwhelmed before you begin. If only the rulebook would alleviate your anxiety.

It isn’t so much that the rule book is incomprehensible but more that it is as arduous as the adventures it teaches. Setting up a scenario is a must to help walk yourself through the game’s mechanics. There’s so much going on that you’ll find yourself scurrying through the rules to understand the game’s finer nuances. Luckily, there are some great walkthrough videos that can assist your efforts and walk yourself through the tutorial. Your persistence will be rewarded with an incredible experience.

Higher level creatures can be resistant to certain attacks while dealing bonus wounds with their special abilities.

You’ll set up a labyrinth for your heroes to explore. These twisting tiles are wonderfully illustrated, though the darkened pathways can make it difficult to discern some features. Interactive elements will be scattered about. Tokens representing unknown foes, or innocent bystanders, will be placed along the route. There’ll be search points that may reveal treasure, doors which have hidden traps you must navigate, and event points that move the story along. It’s hard not to get a little excited about your upcoming quest once you’ve finally set everything up.

Your weakened heroes gain weapons through a collective stash of starting items, but each weapon isn’t available to every hero. Massive swords aren’t available to the bowman while the knight cannot equip a staff. Weapons can be one handed or used dual wielding, and you can even outfit your hero in armor. These all get thrown in with your character’s innate talents and their starting powers. There’s an array of options that individualize your character.

It won’t be long until your characters are tested with their first enemy. Enemy tokens are flipped to reveal your foe, and you’ll draw from the enemy deck to see who you’ll face. The base game has gremlins, raiders, and orcs to battle and there are several levels of each. Green are weak, blue a bit stronger, and red even more powerful. Battles are decided by rolling either some red attack dice or blue multipurpose attack or defend dice. A stronger enemy may not necessarily roll more dice to become more effective. Instead, their rolls may give them additional attack bonuses. Many faces on the ten-sided die have multiple symbols. Hits and misses are straightforward enough, but lightning and stars can enhance you or your enemies’ abilities based on their skills, or your own. There’s also a special symbol, a bit like a poorly drawn bull’s head, that unlocks unique attacks of higher leveled heroes. There is quite a bit wedged onto each little face of the dice, but the cards spell out the enhancements clearly.

Your actions are not restricted to whatever game token you happen to stumble along. The Book of Secrets, the game’s storybook, will pop in from time to time to add twists to your quest. Usually it will add more enemies to the board, but it can also change elements of the game itself. That decision to have your characters be either lawful or chaotic earlier now comes into play at times as well, as the storybook will fork depending on your allegiances. It does add some replayability to the game to see how different characters or alignments play, though the general game concept remains static.

What looks to be an easy fight can become more difficult thanks to story effects or events.

As enemies start to fall, they’ll drop items you can collect such as gold or possibly even treasure, but the most important are the soul points. The soul points you collect can eventually be used to level up your character, and this can have numerous benefits. Heroes can increase their health or action point allowance and may also allow them to gain extra talents or attacks. Many powers can also increase in strength as well since some powers have a multiple levels of ability.

But just when you think you think you can use your increased strength to brazenly rush into a horde of gremlins, you have to consider how powers work. Every power must recharge after being used and is done so by turning the card over. Weaker powers can generally be available again on the subsequent turn, but advanced powers may take from two to five turns before they are active again. It may seem great to obliterate that lone raider with the dwarven cleric’s level five lightning attack until you realize you really could have used it when the orc king shows up.

All this really shows you the level of decision-making this game has. Yes, the story is great, but the story doesn’t drive you. You really feel like you have control of your characters as you choose their equipment and abilities. Even as the game progresses, you’ll ponder which hero should carry the loot you’ve collected or use that flying maul you just found.

As one quest is completed you can choose to take your leveled heroes on to the next quest. And the next. You can tell the story of your heroes through every adventure in the Book of Secrets should you survive the ever increasing difficulty, or you may simply choose any quest to play standalone with a predetermined number of soul points already collected.
But no matter your choice, you’ll have a great sense of accomplishment once you’ve completed your adventure, especially those at the higher level. But then you get to put everything back up. Set up and break down may not take as long as the game, but they are certainly time consuming. You’ll spend a great deal of time fumbling through the rule book to check something, the Book of Secrets to read something, or even double checking the quest book to make sure you set up the board properly. It doesn’t help that the multitude of small pieces makes this an arduous task. If you don’t play this game relatively often, you’ll find yourself relearning all the rules and symbols again.

That’s not to say this game isn’t worth playing. It most certainly is. It’s a fantastic game that really immerses you while you are in it that just happens to be surrounded by stretches of tedium. It’s not unlike flying a long distance to a paradise isle. You’ll love it while you’re there, but it’s the getting there and back that’s miserable.

A great adventure game that allows you to choose your character, their abilities, and watch them evolve. Once you’ve figured out the multitude of rules, the ever changing story, along with the ever increasing difficulty of quests, will keep you coming back for more. It’s benefits outweigh the long setup and breakdown time.