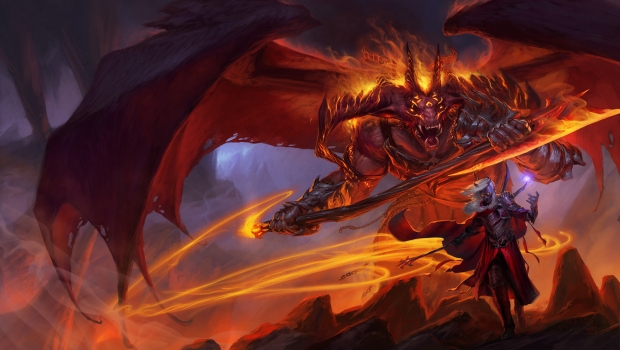 Dungeons & Dragons has likely been around longer than you, the reader, has been alive. It has gone through many iterations and forms, full revisions, and even a few lawsuits, yet somehow has emerged as a mainstream product that permeates movies, games, and of course tabletop. There has always been an issue with the formula that prevented a 1:1 translation from pen and paper to keyboard and mouse — the Dungeon Master, or DM. In games like Neverwinter Nights, Champions of Krynn, Temple of Elemental Evil, and others, the developers put in an incredible amount of time building a scripted narrative for players to engage and explore. In that case, companies like Bioware are taking the role of DM. But what about all of us well-versed storytellers who want to craft our own stories for our friends? Welcome to Sword Coast Legends.

Normally I focus on multiplayer in the latter parts of my reviews, but in this case, Sword Coast Legends is primarily built as an engine to bring together friends for a trip to the world of Forgotten Realms. While there is a single-player campaign (and it is extensive), let’s kick all of this off looking at the world building system of Sword Coast Legends.

We’re going on an adventure, Charlie!

Tools of the Trade
A long list of games have shipped with the tools used to create new levels and brand new adventures. A dedicated set of gamers always turn out something amazing, while the rest of us toil in whatever complex and frustrating minutia has tripped us up from realizing our magnum opus. Sword Coast Legends tries to not only reduce the barrier to entry, but completely eliminate it. Using menu-driven drag-and-drop systems, a would-be DM is able to create worlds ranging from the mundane to the expansive. Dungeons can be dozens of hours deep, filled with monsters you can select from included creature sets.

Speaking sets, the team at n-Space have, at launch, shipped eight scene types — forests, grasslands, swamp, mountains, human and Duergar cities, Elisium, and the Underdark. This will allow you to easily build a huge forest complete with bears and spooky cottages, underground mines filled with spiders the size of a Subaru, and recreate the crimson and purple world of the Underdark. Umber Hulks are scary.

Within these scene sets are subtypes, including 17 human city interiors, five slums, and much more. As big as the selection is, it does give only a hint of what’s possible with this engine. Rounding things out there are 14 creature sets including Drow, Illithids, Goblins and the usual suspects, though I was surprised that there is nary a yippy kobold or fearsome dragon to be found.

With your creatures and setting selected, it’s time to build the heart of any good dungeon — quests and storyline. The normal archetype quests to defeating a boss, collecting a trinket, or taking down a group of enemies are present, but a good chunk of time you’ll be using the custom quest button. After naming your quest, you can begin to pipe in the mechanics that trigger it, what happens when it is triggered, how it links to creatures or behaviors, and much more.

The sky’s the limit on what you are able to create, no matter how ridiculous or out of touch with reality it is. Want to place an invisible horse named Cheesers into the clearing, requiring players use their search skill to uncover him? Done. Want to rig Cheesers with a trap that triggers when he’s found and makes him shriek “I regret nothing!” as he explodes into horse giblets? I suppose you could do that as well. While it falls short of being able to record your own dialogue (something strongly hinted at during development), it does allow you to build a great text-based quest set. It’ll be on you as the DM to actively narrate to fill the gaps.

With your world built and published, it’s time to drag your friends through it. Unlike other games where you are given tools to build scenarios, Sword Coast Legends provides the tools and capabilities to live-DM your adventure. When that plucky dwarf rogue manages to decimate your well-constructed Orc Commander with the hours of backstory with a lucky strike backstab, normally the adventure would come to a screeching halt. It’s here where the game really shines. As your adventurers tackle your dungeon, overworld, or whatever else you’ve built, you’ll earn points to adjust to fit the players. Promoting or demoting monsters and NPCs, spawning reinforcements, and otherwise tweaking the flow on the fly helps bring the whole thing to life. Currently there are 1147 free player-built modules for you to download either to make into your own, or to run as-is, all free. Since the community can rate them, the cream rises to the top, at least most of the time.

Welcome, adventurers
As a player, all of the things I’ve mentioned above is completely seamless. Other than a little wisp that shows where the DM’s cursor is (and this can be turned off to allow him or her to be invisible), the game acts and feels like a fully-scripted pre-built adventure. As this is Dungeons & Dragons, the game is entirely class based. You can allow pre-built characters of any level up to 20 (the current cap) join your game, or you can push all players to roll new characters. The characters fall into the usual archetypes including fighter, rogue, cleric, wizard, paladin, and ranger. If you are immediately asking “Well, what about XYZ class?” then you’ll also be happy to know that the team at n-Space are working hard to add many more classes such as monk, sorcerer, and others. This breathes new life into the product, allowing a DM to build an entirely class-specific adventure when those classes eventually become available. I look forward to taking a monk, kensai, or ninja team through the world of Oriental Adventures, should that tileset ever become available.

To reduce the “Little Big Planet” problem of users cheating the system by creating worlds where there are simply dozens of treasure chests and no risk, the team has limited the amount of loot and randomized it entirely. This does create an issue whereby it’s hard to reward players with specific gear for dungeon completion, but it does mean that you won’t have every player min/maxing their gear instead.

A quest of epic proportions
The single player campaign for Sword Coast Legends harkens back to many of the games I mentioned earlier. Played from an isometric view, it reminds me of the Neverwinter series. You play a member of the Order of the Burning Dawn, a guild once charged with finding the fallen silver tears of their worshipped goddess. Unfortunately, all of those legends have faded into obscurity, making their more recent engagements that of mercenaries, or in this case, caravan guard duty. Stopping for the night between the cities of Luskan and Neverwinter, your character experiences terrifying nightmares about the end of the world, demons, and worse. Awakening, you shortly find that the caravan is under attack, and it’s up to you and your assembled team to figure out what these unusually-well-armed bandits want from the Order of the Burning Dawn.

The story for Sword Coast Legends was hand crafted by several members from the team that brought us Dragon Age: Origins and Mass Effect, including Jay Turner. With that knowledge in mind, the mechanics of the game suddenly make a great deal of sense. Blending the best parts of your MMO-dejour with some of the UI goodness from Dragon Age, and bolting them to the well-defined Dungeons & Dragons framework gives you a system that can seamlessly deliver some solid gameplay…with a few exceptions.

CRPGs are unique because they often have a depth not seen in consoles. Digging deep in the dark uncovers foes that often can be dispatched with either cunning or combat. In the single player campaign, there are far fewer opportunities for the latter than the former. Monster closets are frequent, eventually making the combat feel a little rote. Coupled with some occasionally painful pathfinding has archers at the front while fighters shout curses from the back. I found that I used the active pause system for positioning more than tactically.

Whassit the Quasit has a special message for everyone.

In both multiplayer and single player, there are a few issues that spoil the fun a bit. Your characters will occasionally detect traps behind a wall before their perception finds the hidden passageway, tipping you off to search in that area. You’ll also spot monsters at the edge of your screen without tipping them off, allowing you to remain one step ahead of everyone at almost all times. Hopefully these are bugs that can be patched as it can ruin some of the mystery of a module.

When playing with friends or solo, only your main character ‘engages’ in the story elements. This means the Wizard you selected because wizards are cool does all the speaking with his or her low charisma score, rather than the Paladin with all the CHA in the world. Also, talking to any NPC causes the game to fade to black and snap all players to a preset location to see the dialogue, even if that dialogue is just selling off your vendor trash. Having the party leader be the only voice of the team causes all sorts of issues with the flow of fun.

The camera can be a colossal pain on the PC, which is a shock. Clicking the middle mouse wheel centers and follows the party, but absent that, you are controlling the camera movements with the WASD keys. You get used to it, but it doesn’t feel as smooth as you might expect.

If I’m being completely honest, I do feel like the tileset that shipped with Sword Coast Legends is a little light for building a full module. For smaller adventures, there are enough creatures and places to build something out, but this engine is less of a ‘build from scratch’ as much as a ‘fill in the details in pre-built sandboxes’ sort of engagement. It’ll be nice to see if n-Space eventually unlocks the whole shebang to allow us to stitch new worlds together from scratch in the future.

With a proper DM, Sword Coast Legends feels every bit like the pen and paper game come to life. On the other hand, running modules or playing through the 40-hour single player game makes it feel like more of a standard fare dungeon crawler than a Dungeons & Dragons game. Multiplayer with a DM realizes the promise of Sword Coast Legends, conveying freedom of storytelling and imagination in real time. Come for the co-op and live-DM, but be patient with the tools as they evolve.

Ron Burke is the Editor in Chief for Gaming Trend. Currently living in Fort Worth, Texas, Ron is an old-school gamer who enjoys CRPGs, action/adventure, platformers, music games, and has recently gotten into tabletop gaming. Ron is also a fourth degree black belt, with a Master's rank in Matsumura Seito Shōrin-ryū, Moo Duk Kwan Tang Soo Do, Universal Tang Soo Do Alliance, and International Tang Soo Do Federation. He also holds ranks in several other styles in his search to be a well-rounded fighter. Ron has been married to Gaming Trend Editor, Laura Burke, for 21 years. They have three dogs - Pazuzu (Irish Terrier), Atë, and Calliope (both Australian Kelpie/Pit Bull mixes).
Related Articles: Sword Coast Legends
Share
Tweet
Share
Submit